With the future of our economy in peril, JOHN HUMPHRYS says: Let’s get to work on boom town Britain

There are probably more jokes about economists than there are economists themselves.The oldest is that if you bring ten economists together you will g

The oldest is that if you bring ten economists together you will get eleven opinions. Which makes what is happening in this Covid-stricken world so remarkable.

Economists actually agree with each other — up to a point. They agree that we are facing a massive economic crisis.

Some say we have to go back to 1825, when the Bank of England was a whisker away from collapsing, to find anything comparable. 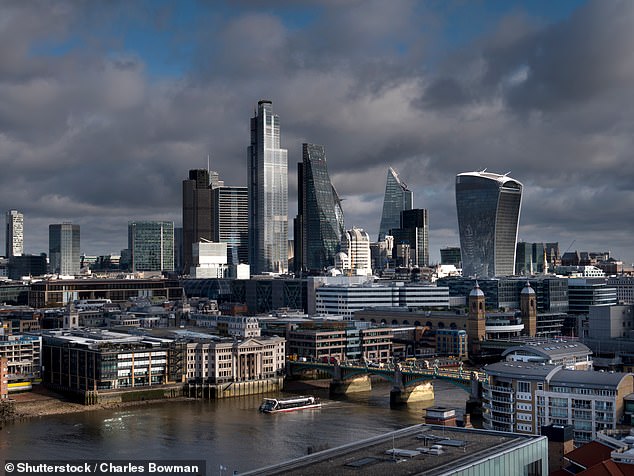 As the nation’s workforce remains at home and our cities stay deserted, economists are actually agreeing with each other that we are facing a massive economic crisis

Others say it’s even worse than that. But no one knows how much worse because these are still early days.

At its heart an economy is pretty simple. It’s about people working. If enough of us cannot work you have a crisis. The same applies if people choose not to work because they’re perfectly happy rubbing along as they have been for the past five months.

And when one part of the vast economic machine ceases to work the resilience of the whole comes into question. It’s obvious, they say, that we should get everyone working again as swiftly as possible.

Humpty Dumpty has fallen off the wall and shattered into a thousand pieces. So it’s vital that we pick up those pieces and put him back together just as he was before that vicious little virus went on its rampage.

And this is where, with all due humility, those of us who are not economists might raise a few pretty important questions.

Economists tend to deal in abstractions of one sort or another. It’s all about ‘aggregates’ and ‘absolute advantages’ and ‘adaptive expectations’ which are, of course, very different from ‘rational expectations’.

I could easily fill this page with their jargon. Or maybe a book. And I wouldn’t understand a word of it.

But there is one simple unquestioned assumption behind all this abstract modelling. We must get the economy back up to the size it was then keep making it bigger. There is, of course, one massive drawback with that approach. The more we produce the more we pollute. 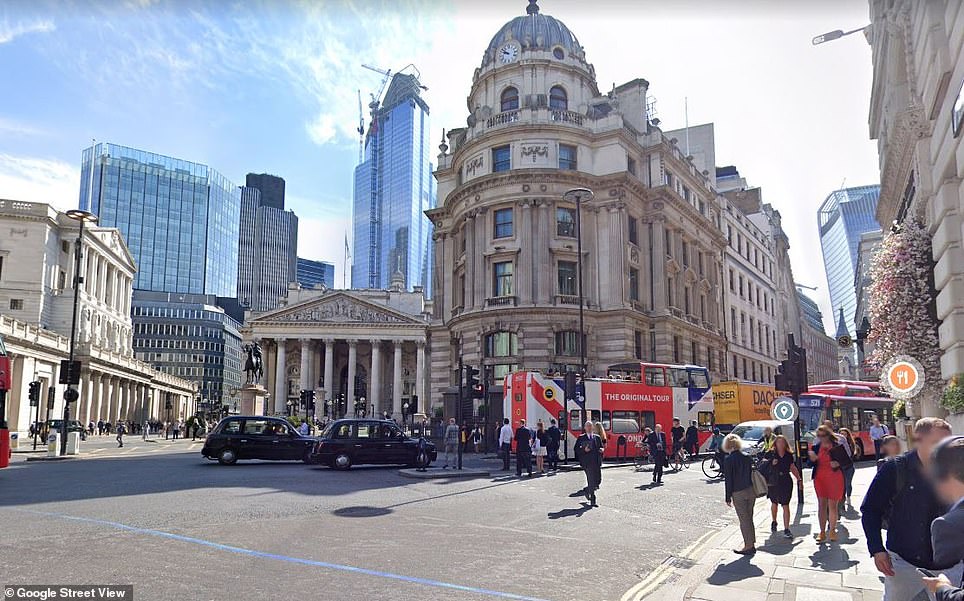 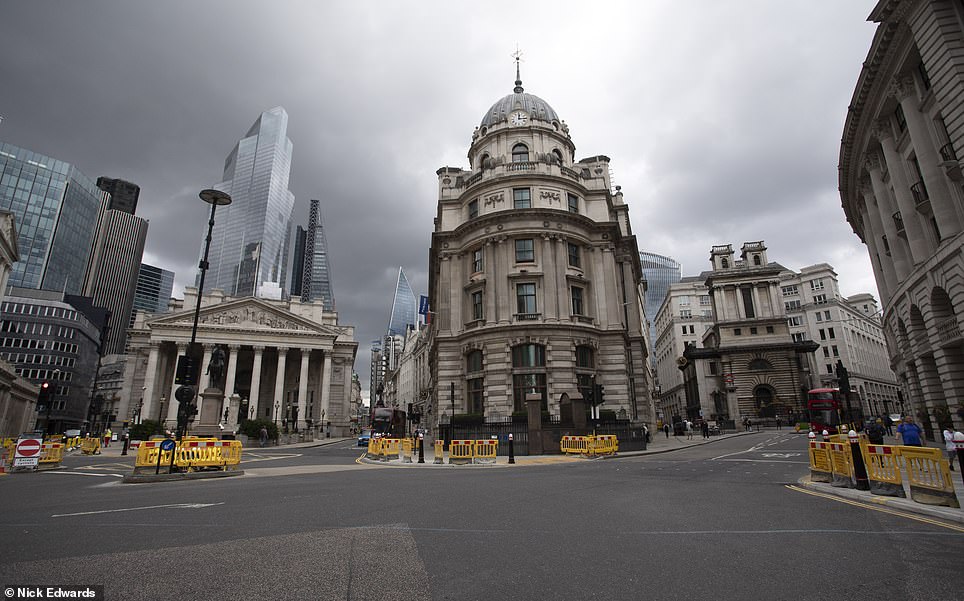 Deserted: The Square Mile stands empty (right) on a weekday afternoon with office workers staying away from their desks. The picture on the left shows how busy it used to be at a comparable time

But let’s put that aside for now and return to my rather simplistic image of Humpty Dumpty.

In an absurdly sanitised version of the ancient nursery rhyme on CBBC (mustn’t upset the kiddies must we?) all the King’s horses and all the King’s men actually ‘made Humpty happy again’.

And, of course, it’s entirely possible that we can do the same.

We can, perhaps, reverse the extraordinary process we set in train with the lockdown. We may once more gaze in awe at those towering goliaths of steel and glass with their vast multi-storey atriums and floor upon floor of open-plan offices furnished with row upon row of the one essential tool of modern economic life, the computer screen. 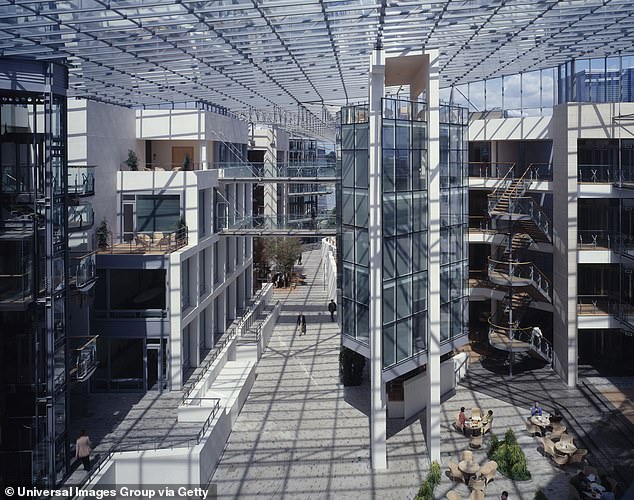 This was the future once and maybe it will be again. After all, the towers are still standing as a mighty symbol of untold wealth for the few and prosperity for the many. But the streets at their base have become largely deserted. Human life there has fled.

Birdsong can once again be heard, or would be if there was anyone to listen.

The question is whether we should bend every sinew to reverse the process. There are already signs that big business is looking at its big buildings and seeing something different. John Lewis is the latest to reveal that it’s thinking of converting some of its big city stores into affordable housing.

And you can bet that many a chief executive is wandering around his magnificent office suite with its panoramic views on the top floor, and wondering how much it would fetch if they spent a few quid turning it into a luxury penthouse. We already know that most office work can actually be done by the staff staying at home and curling up with their laptops.

One firm after another — Google, NatWest, Facebook, British Airways, KPMG and many more — have announced that they have no plans to fill their city offices again at least until next year.

And they’ve dropped heavy hints that in many cases they may never do so. The Centre for Economics and Business Research has forecast that around a third of the workforce will stick to working at home, at least for the most part.

So whereas last year it was estimated that about 1.7 million people worked ‘mostly from home’, soon it could be 10.7 million.

So far, so obvious. But many economists and politicians are scared of the consequences. Alex Brummer summed it up brilliantly in these pages this week. The key word is interdependency. It might be fine for those financial workers to stay put in Godalming or wherever, but what about the developers who put their money into building those towers if there’s no longer demand for their offices? 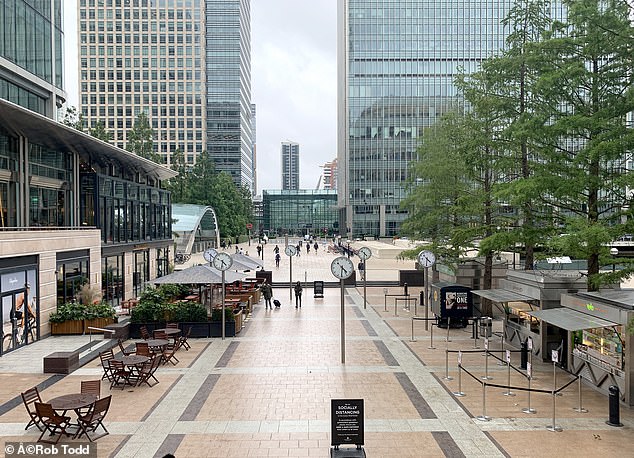 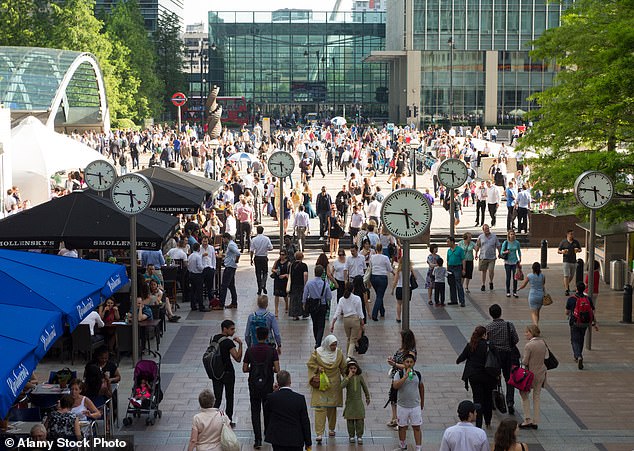 What’s going to happen to the finances of public transport if no one needs the Tube and the buses and trains to get to work? Or the office security guards or the maintenance staff or the cleaners?

And what about the little shops which rely entirely on office workers rushing out to grab a sandwich or drop something into the dry-cleaners, or get their shoes repaired or spend a quick hour in the gym? Or the pubs and restaurants? And what about our schools and hospitals and police and every other service that’s paid for partly from the tax revenue that this frenzy of city life generates?

All gone. Which is why Humpty Dumpty must be put back again, exactly as he was before.

Or is it? This may well be a case of fear trumping common sense and, indeed, concealing a future that might be better. Economic change brings opportunities as well as casualties. 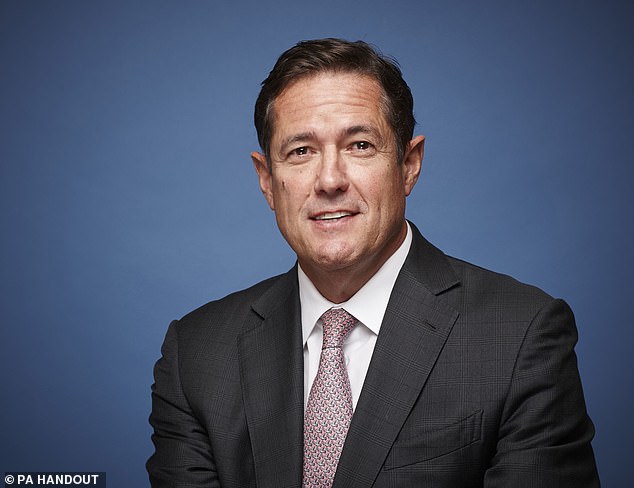 Back in Godalming there will be a boom. Former ‘city workers’ will still need all those services but they will go to their local shops for them. High streets will be reborn.

People like security guards and cleaners who spent a chunk of their miserably low incomes commuting into the city at hideous hours of the day will find other ways to make a living in their revitalised towns. It’s hard to think of a less productive use of time than spending two or three hours a day commuting. It has no merit.

Allow me to steal a bit of economist jargon. Dynamic economies require ‘creative destruction’. If something does not work it must be allowed to die so that something better can take its place. Those who resist are Luddites.

Of course it’s hard. Disruption is never easy. But change is better than keeping something going because fabulously rich companies or individuals have invested so much in it. The familiar can be the enemy of the new. 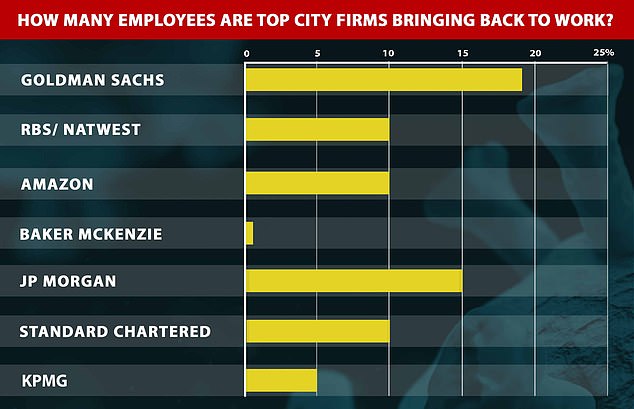 As a native of South Wales I have seen the decline and fall of what was once one of the mightiest industries in the world. But I’ve never met a mother who wanted her son to go down the pit.

Shelley’s famous poem ‘Ozymandias’ tells of a ‘traveller from an antique land’ who comes across the broken statue of ‘the king of kings’. Around it there is nothing left of a once-great empire.

We might ask whether, as they saw the end coming, the subjects of Ozymandias worried about what was going to happen to the sandwich-makers and the shoe repairers. History, of course, does not relate. But we’re all still here, doing other things.

So should we try to ‘save’ the city by turning our back on what we have only now discovered? That a modern digital economy may not need, as we thought, the Towers of Mammon to survive.

Or should we embrace change, even if it is disruptive, and abandon those towers as brash monuments of a world that once existed but does no more?