The United Steelworkers Union has beamed 'Biden Harris' onto the Trump Tower in Chicago.The giant campaign logo was projected onto the skyscraper in d

Luxury giant LVMH will counter-sue Tiffany & Co after backing out of $16.2 billion takeover
Pregnant pillion passenger dodges runaway truck wheel as it flies towards her head
Giving in to Temptations! Clever cat breaks into a carton of treats in under 60 seconds

The United Steelworkers Union has beamed ‘Biden Harris’ onto the Trump Tower in Chicago.

The giant campaign logo was projected onto the skyscraper in downtown above the Trump branding, while other pro-Democrat images were shone onto Wrigley Field and the Chicago Theatre on Saturday evening.

The United Steelworkers union, which came out against Trump four years ago, tweeted: ‘An eyesore no more.’

Illinois shouldn’t be a tough state for Biden to take. Hillary Clinton mustered a 16 point victory there in 2016, while President Barack Obama won it by almost 17 points. 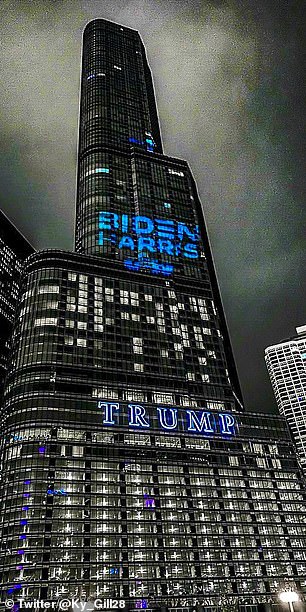 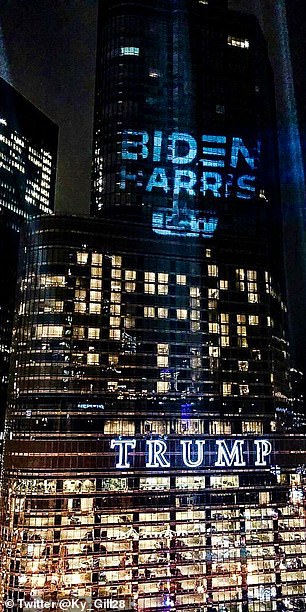 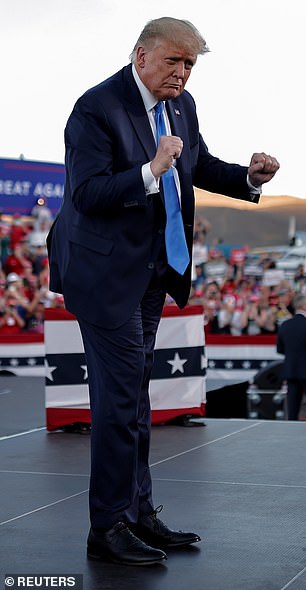 ‘It’s why Biden felt the need to lie about the Boilermakers endorsing him when they haven’t, while the Boilermakers Local 154 – the largest Boilermakers local in the country – have actually endorsed the President … Union workers know President Trump has fought for them and they also know that Biden’s policies and proposals are a disaster for workers.’

Illinois aside, the Midwestern battlegrounds of Wisconsin, Michigan, Iowa and Ohio will prove a tougher contest for Biden.

Michigan narrowly tipped for Trump in 2016 and is being fiercely contested this year.

Trump has visited the Great Lakes state to argue he is ushering in an American comeback, but voters are concerned about the coronavirus’ impact on the economy and the president’s response to the pandemic.

In Wisconsin, Clinton opted against campaigning in 2016, and voters punished her for it.

This year Democrats highlighted Wisconsin, locating their national convention there although the gathering moved online over coronavirus concerns.

Trump and Biden have campaigned in the state, while Vice President Mike Pence and Biden running mate Kamala Harris have also visited.

Trump won easily in Iowa four years ago, beating Clinton by nearly 10 points, but the race appears close this time in the farming state. 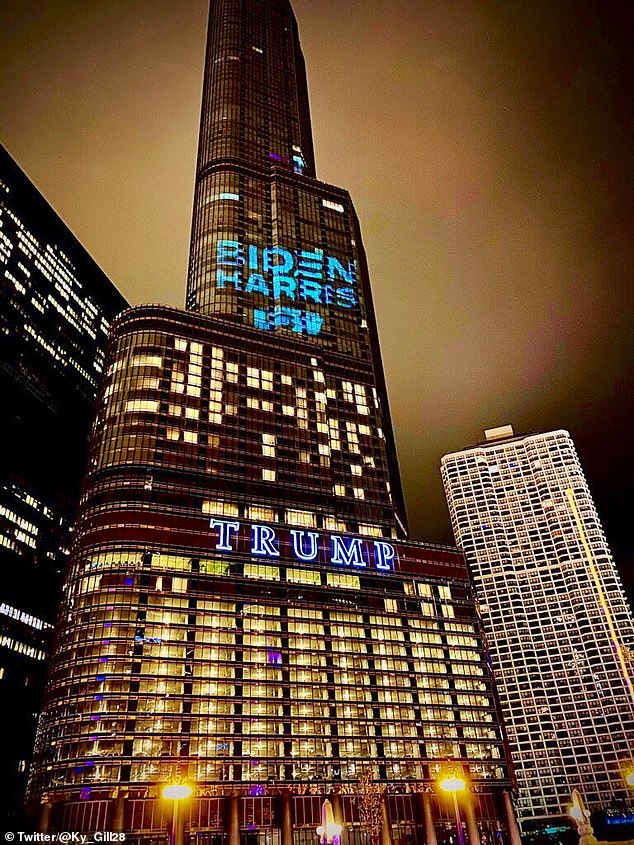 The Trump Tower in Chicago on Saturday night

Trump held a campaign rally in Iowa last week, a sign he is playing defense in a state he had been expected to win.

Ohio, with 18 electoral college votes, is a major prize.

Trump defeated Clinton in Ohio by 8.1 points but polls show a close race this time in the midwestern industrial state.

Biden has visited and touted his role in helping save the US automobile industry when he was vice president.