‘The Democrats are sabotaging the Post Office because they’re not approving $25 billion that was requesting,’ the president said during a press briefing, likely referencing Democrats blocking the GOP proposed coronavirus relief package last month.

Trump also said during his White HOuse press briefing Wednesday evening that Democrats are wanting $25 billion in funding for the Post Office in the next coronavirus relief package is ‘politically’ motivated because it will bolster the USPS ahead of mass amounts of ballots flooding their offices.

‘They also want $25 billion additional for the Post Office… so the Post Office can handle this vast amount of ballots that are being sent at random all over the place,’ the president lamented of Democrats.

‘They have no idea where they’re going,’ he continued.

‘Now they want to take it countrywide – mail-in voting,’ Trump said after railing against recent failures with mail-in voting leading to confusion over who actually won. 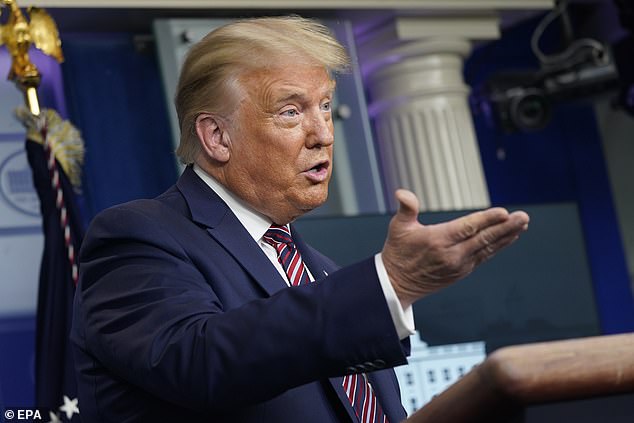 Donald Trump decried Democrats on Wednesday, confusingly claiming they are ‘sabotaging the Post Office’ by asking for more money to bolster the USPS for mail-in voting 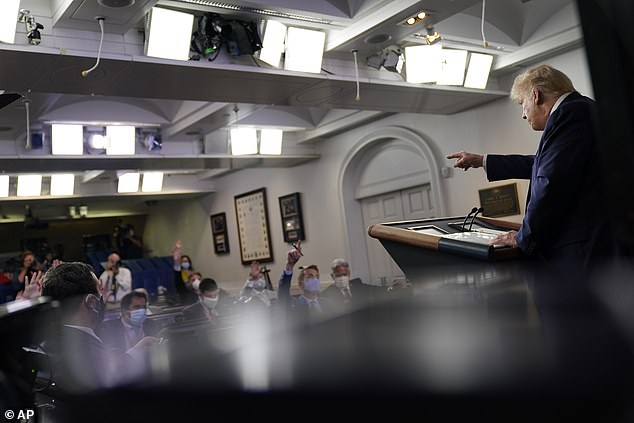 ‘It’s going to be the greatest fraud in the history of elections,’ he continued, pointing to Democrats as the biggest threat rather than foreign entities trying to interfere in the elections.

During his briefing, the president claimed that it would be impossible for Democrats to force nationwide mail-in ballots if they don’t get the money for it through another piece of sweeping stimulus legislation.

Trump has long expressed his displeasure with the proposal that all American voters cast their ballots by mail in November in light of the prevailing coronavirus pandemic.

The president has claimed moving the country to those fully-remote measures would increase the likelihood of fraud and disproportionately benefit Democrats.

He suggested Wednesday that he would not sign off on a relief bill that allocates billions going towards mail-in voting.

‘They turned down this bill because they want radical left agenda items that nobody in their right mind would approve,’ Trump said of Democrats refusing to agree to the GOP bill proposed at the end of last month.

‘The bill’s not going to happen because they don’t even want to talk about it because we can’t give them the kind of ridiculous things that they want that have nothing to do with the China virus,’ he said, again referencing mail-in voting and money for the Post Office.

Trump listed measures Democrats have demanded be part of the next bill, even as negotiations collapsed on Capitol Hill last week.

Democrats are demanding $25 billion for USPS to bolster its staff and capabilities – and the party also wants $3.5 billion specifically allocated toward mail-in voting so the Post Office can handle a higher-than-usual volume of critical mail.

‘I think we could do it for less,’ Trump insisted. ‘But they want $35 billion for the Post Office because of this.’

He also put his trust in new Postmaster General Louis DeJoy, who just took lead at the USPS in mid-June of this year.

‘And remember, the new man who is a great person, a great businessman – just got there a little while ago,’ Trump said of DeJoy, claiming the Post Office was previously ‘run poorly for many, many decades.’

Loading...
Newer Post
Former gymnast Chellsie Memmel reveals she is making a comeback ahead of the 2021 Olympics
Older Post
Donald Trump claims other countries’ economies are suffering more because of coronavirus