As a lifelong insomniac, it's been drummed into me that 'blue light' — the type emitted by smartphones and laptop screens — is the enemy. This sh

Over 9,000 shoppers swear by this £5 shampoo for fighting dry, flaky and itchy scalps
The 3D-printed cage that could spare hundreds of Britons from leg amputations
Former FDA head says the US is entering the ‘biggest wave’ of the coronavirus pandemic

As a lifelong insomniac, it’s been drummed into me that ‘blue light’ — the type emitted by smartphones and laptop screens — is the enemy.

This short-wavelength, high-energy light is also a natural part of sunlight, and helps to regulate our body clocks in the morning by suppressing the release of the sleep hormone melatonin, to keep us alert during the day.

If you’re exposed to it at the wrong time — i.e. the evening — it can be harder to drift off as the melatonin is still suppressed. This shifts the body clock, which can have ramifications not only on our sleep, but on our health, too.

As well as my established sleep problems, over the past few years I’ve also developed chronic dry eyes, which get particularly itchy and irritating if I sit in front of a screen for long periods of time.

So when I saw an advert for blue light-filtering glasses, promising to relieve eye strain, comfort dry eyes and — the holy grail — improve sleep, I was sold. A few subtle hints later and I received a smart-looking pair (­costing £39) for my birthday. 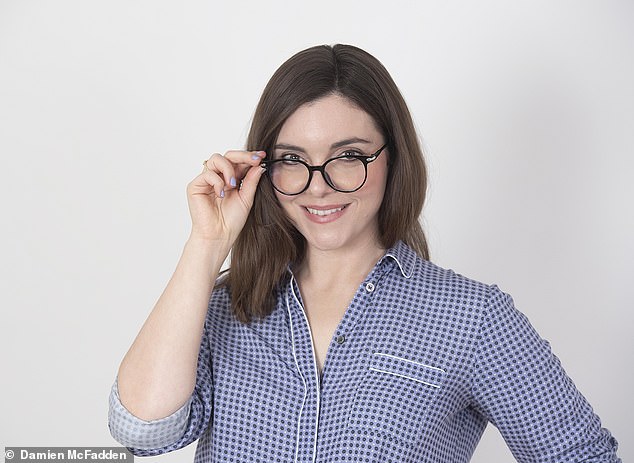 As a lifelong insomniac, it’s been drummed into me that ‘blue light’ — the type emitted by smartphones and laptop screens — is the enemy. Pictured is Libby Galvin

I won’t have been the only one tempted by these: researchers say the global market for such eyewear will reach $27 million (£21 million) by 2024, up from $18 million (£14 million) last year, as a result of clever marketing aimed at the increasing numbers of us with sleep problems and eye strain from overusing screens.

The specs look like normal glasses, but the lenses have a very slight — almost imperceptible — blue or amber hue. A chemical coating limits the amount of bright blue light reaching the eye’s retinal ganglion cells, which respond to this light by suppressing melatonin release.

So the theory is that the glasses will reduce the blue light reaching these cells and stop melatonin suppression. Animal experiments have shown blue light can also damage the eye itself, which is where the claim to reduce eye strain springs from. So am I sucker for good advertising? 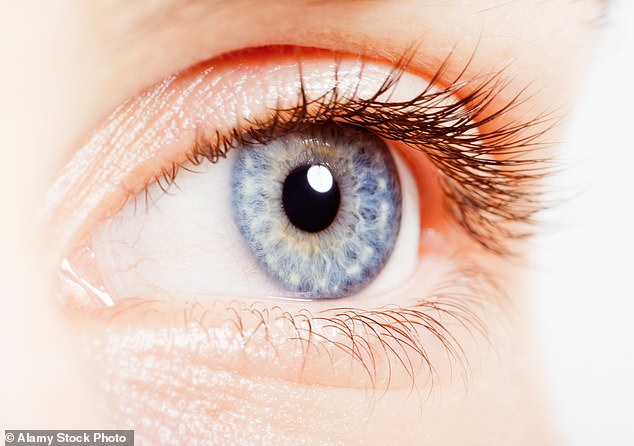 Animal experiments have shown blue light can also damage the eye itself, which is where the claim to reduce eye strain springs from. So am I sucker for good advertising?

Or are these the answer to my itchy eyes and nights lying awake? When it comes to sleep, the principle behind blue light-blocking glasses is sound enough, says Timothy Brown, a professor of neuroscience at the University of Manchester.

‘The coating on these glasses filters out shorter wavelengths of light and, as a result, reduces brightness. ‘Bright blue light has a big impact on the retinal ganglion cells, which regulate the effects of light on sleep by affecting melatonin secretion. So, in principle, the blue light filters can be beneficial.’

However, he says, don’t wear them all day. ‘There’s an alerting effect of light, so wearing blue light-blocking glasses all day is probably not that s­ensible when it comes to your circadian rhythm [body clock],’ he adds.

There are other caveats, too, not least that these glasses are not regulated medical devices, so there is no standardisation of make up and quality of coatings on the lenses. ‘

There’s so much variability in terms of what people describe as blue light-blocking,’ says Professor Brown. ‘Some glasses could have a relatively big effect, others probably do virtually nothing.’ 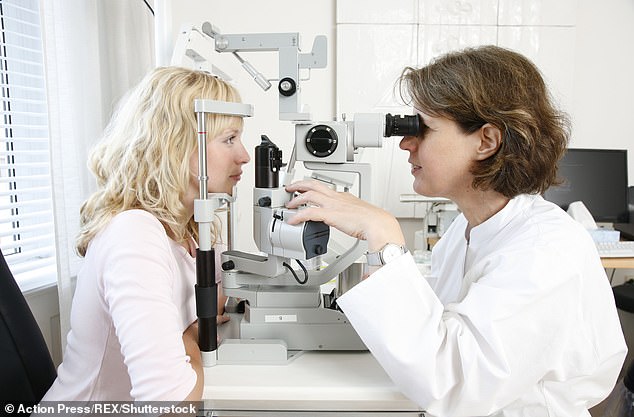 As well as my established sleep problems, over the past few years I’ve also developed chronic dry eyes, which get particularly itchy and irritating if I sit in front of a screen for long periods of time (file image)

Another complicating factor is that by filtering blue light, you might see more yellow light, which ironically could disrupt your sleep even more, as Professor Brown and his team detailed in a study last December in the journal C­urrent Biology. They found that when the eye perceived light as being blue, sleep was disrupted less than when the eye saw the light as yellow, assuming both lights are equally bright (remembering that when we say ‘blue light’ in terms of filtering lenses, we mean bright, high-energy light — not the colour the eye necessarily sees).

This means that, although the dimming effect of a blue lightfiltering lens may seem to be good for sleep, the fact that the lens simultaneously makes the light reaching the eye appear more yellow may cancel out any benefit. ‘It’s a much more complicated area than people probably want it to be,’ says Professor Brown.

‘What is unequivocally clear is that brighter light, whatever colour it ‘appears’, will have more of a disruptive effect [on your body rhythm] than dimmer light. You can counteract this more effectively by reducing the amount of unnatural or screen light you’re exposed to in the evenings, rather than by using filtered glasses or adjusting screen settings,’ he adds.

My dreams of better sleep are dashed, then. But will the glasses at least keep dry and aching eyes at bay when I’m sitting in front of my laptop? ‘Claiming to tackle eye strain is ambiguous enough to satisfy advertising standards that mean these products cannot make medical claims,’ says Daniel ­Hardiman McCartney, a n optometrist and clinical advisor to the ­College of Optometrists.

Sneaky ways to add veg without anyone noticing. This week: Burgers with lentils and mushrooms.

This recipe makes two burgers and gives you one of your five-a-day. Fry 160g chopped mushrooms until soft.

When cooled, blitz with 3tbsp cooked lentils. (If you don’t have a blender, crush the lentils with the back of a wooden spoon and chop the mushrooms as finely as you can).

Mix the mushrooms and lentils with 300g minced beef, and form into two patties. Pan fry the burgers until steaming hot all the way through and there is no red beef left inside.

‘But the science to support it falls short,’ he adds. A review of three studies, published in the journal ­Ophthalmic & Physiological Optics in 2017, looked at the dry eye and eye comfort claims and found there was very little evidence out there either way. ‘We at the ­College of Optometrists concluded that the best evidence available doesn’t support the use of these blue light-­blocking coatings, and our advice is that people don’t need to spend their money on these glasses.’ What if you’ve already spent your money?

Daniel Hardiman McCartney says they’ll do no harm as long as the lens itself is of a high enough quality. ‘In some cases, providers will put these light-filtering coatings on a prescription lens, and then you know there’s no distortion, the lens is cut to the standard it needs to be — and, crucially, it is clear to look through.

‘When you buy non-prescription blue light-filtering lenses, the supplier is under no obligation to use an ophthalmic-quality lens, so you might get distortions and aberrations, making it harder to see through and causing eye strain, with no benefit to eye health.’

What’s more, Daniel Hardiman McCartney suggests it isn’t blue light that causes dry eyes or strain, but rather a lack of blinking when using screens. ‘Take the example of people reading newspapers in the garden,’ he says.

‘This has been done for years without anyone complaining about dry eyes — and yet if you sit and stare at a piece of paper [which reflects the sunlight] in direct sunlight, the amount of blue light you’ll get in five minutes is probably equivalent to looking at a computer screen for years, non-stop.’

So to cope with eye discomfort, instead of blue light-filtering glasses, follow the 20-20-20 rule, he says. Take a break every 20 minutes and look at an object 20ft away for at least 20 seconds — and ‘don’t forget to blink’. ‘When you look at a screen for a long period of time, your blinks become less effective at washing out the old stagnant tears and replacing them with fresh, comfortable tears.

‘Blink regularly, and occasionally screw up your eyes and have a few big blinks. ‘And if this dryness persists, arrange a sight test.’ He adds that blue light filters won’t necessarily protect against sun damage to sight, either.

Despite all this, since I already have blue light-filtering glasses, I had to try them. The result? Well, after about a month I’m still relying on my eye drops and am prone to late nights. But at least the glasses make me look brainier.