Stone Age may have continued up to 20,000 years longer than previously thought in some areas

The Stone Age period may have continued 20,000 years longer in some part of Africa than was previously thought, recent archaeological finds revealed.T

The Stone Age period may have continued 20,000 years longer in some part of Africa than was previously thought, recent archaeological finds revealed.

The new discoveries at sites in Senegal on the West coast of Africa, by Max Planck Institute researchers, are fuelling a rethink of the passage of human evolution.

Previous discoveries suggested humans in Africa stopped using certain tools and methods – including simple points and scrapers – in favour of more complex and crafted equipment including spears and blades about 30,000 years ago.

This distinction in equipment, and a move to a more artistic and regionally diverse approach to tools marks the transition from Middle to Later Stone Age.

Archaeologists found ancient West African inhabitants were still using simple tools about 11,000 years ago – up to 20,000 years after they went out of favour elsewhere.

This disproves a long-held theory that humanity evolved in one uniform way towards our modern lifestyle – and instead evolved at different speeds around the world. 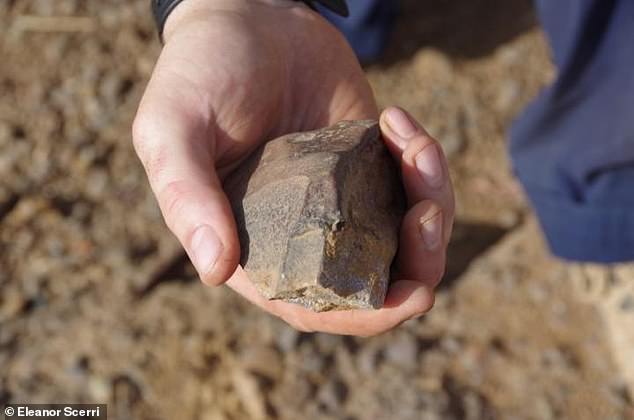 The new discoveries at sites in Senegal on the West coast of Africa, by Max Planck Institute researchers, are fuelling a rethink of the passage of human evolution

Middle Stone Age finds most commonly occur in the African record between around 300 thousand and 30 thousand years ago, after which point they largely vanish – although new research suggests this continued in some isolated areas much later.

The exact transition varies from region to region, but the last stage of the later stone age – the Neolithic – game way to the bronze age around 3,500 BC.

Archaeologists say their research supports the idea that – for most of humanity’s prehistory – groups of humans were relatively isolated from each other.

The discovery comes as archaeologists take some of the first steps in uncovering the prehistoric past of West Africa, which they say has been under-studied in comparison to the eastern and southern reaches of the continent.

The lead author of a new study, Dr Eleanor Scerri, said West Africa is a real frontier for human evolutionary studies – as almost nothing is known about its prehistory.

‘Almost everything we know about human origins is extrapolated from discoveries in small parts of eastern and southern Africa,’ explained Scerri.

Her colleague, Dr Khady Niang, of the University of Cheikh Anta Diop in Senegal, added: ‘These discoveries demonstrate the importance of investigating the whole of the African continent, if we are to really get a handle on the deep human past.

‘Prior to our work, the story from the rest of Africa suggested that well before 11,000 years ago, the last traces of the Middle Stone Age were long gone.’

The team don’t know exactly why West Africa’s Stone Age inhabitants took longer to adopt new tools, but speculate it could be because of geographical isolation.

Other theories suggest it could also be due to  less radical changes in climate which meant humans living there didn’t need to find new ways to adapt. 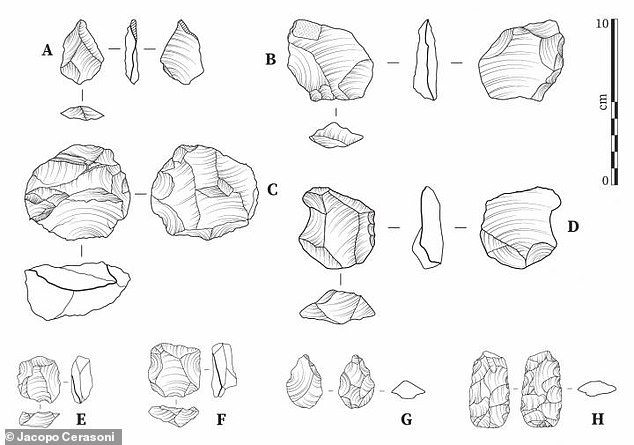 Archaeologists say their research supports the idea that – for most of humanity’s prehistory – groups of humans were relatively isolated from each other. These drawings show some of the tools in use 11,000 years ago in West Africa that had already gone out of use elsewhere

Dr Niang said: ‘All we can be sure about is that this persistence is not simply about a lack of capacity to invest in the development of new technologies.

‘These people were intelligent, they knew how to select good stone for their tool making and exploit the landscape they lived in.’

The team said their findings, along with genetic discoveries which show a huge amount of diversity among humans living on the continent, fit with a newer view of human evolution that Stone Age groups lived and developed separately.

Dr Niang said: ‘We aren’t sure why, but apart from physical distance, it may be the case that some cultural boundaries also existed. Perhaps the populations using these different material cultures also lived in slightly different ecological niches.’ 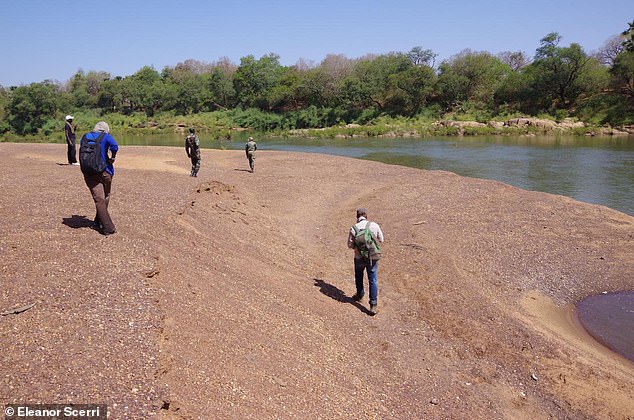 Team fieldwalking along the Gambia River, Senegal. The team don’t know exactly why West Africa’s Stone Age inhabitants took longer to adopt new tools, but speculate it could be because of geographical isolation

Around 15,000 years ago, a major increase in humidity and forest growth in central and western Africa linked different areas and provided corridors for groups to disperse – spelling the end for Middle Stone Age tools.

Dr Scerri added: ‘These findings do not fit a simple unilinear model of cultural change towards ‘modernity’.

‘Long isolated regions, on the other hand, may have been important reservoirs of cultural and genetic diversity. This may have been a defining factor in the success of our species.’

The findings were published in the journal Scientific Reports.

WHAT DO WE KNOW ABOUT THE HISTORY OF THE STONE AGE?

The stone age is a period in human prehistory distinguished by the original development of stone tools that covers more than 95 per cent of human technological prehistory.

It begins with the earliest known use of stone tools by hominins, ancient ancestors to humans, during the Old Stone Age – beginning around 3.3 million years ago.

Between roughly 400,000 and 200,000 years ago, the pace of innovation in stone technology began to accelerate very slightly, a period known as the Middle Stone Age.

By the beginning of this time, handaxes were made with exquisite craftsmanship. This eventually gave way to smaller, more diverse toolkits, with an emphasis on flake tools rather than larger core tools.

The stone age is a period in human prehistory distinguished by the original development of stone tools that covers more than 95 per cent of human technological prehistory. This image shows neolithic jadeitite axes from the Museum of Toulouse

During the Later Stone Age the pace of innovations rose and the level of craftsmanship increased.

Groups of Homo sapiens experimented with diverse raw materials, including bone, ivory, and antler, as well as stone.

The period, between 50,000 and 39,000 years ago, is also associated with the advent of modern human behaviour in Africa.

Different groups sought their own distinct cultural identity and adopted their own ways of making things.

Later Stone Age peoples and their technologies spread out of Africa over the next several thousand years.

Loading...
Newer Post
Woman has a collection of more than 12,500 cuddly bears at her ‘Teddy Rescue’
Older Post
Chelsea forced to SHUT their academy base at Cobham following coronavirus outbreak