President Joe Biden's $2.3 trillion infrastructure plan contains funds for much more than roads and bridges – and would spend billions to address 'per

The plan is filled with language setting out a specific goal of steering jobs, grants, apprenticeships, and other benefits to minorities and women. And while Republicans have focused on its price tag and tax cuts to pay for it, they have begun to focus on its workforce development and other programs that they say pads brick and mortar proposals.

A plan for 15 decarbonized hydrogen demonstration projects – meant to reduce carbon output by industry – would target them for ‘distressed communities,’ relying on a production tax credit to encourage them.

Amid a history of not-in-my-backyard clashes, the plan includes steps for carbon capture facilities ‘ensuring that overburdened communities are protected from increases in cumulative pollution.’ 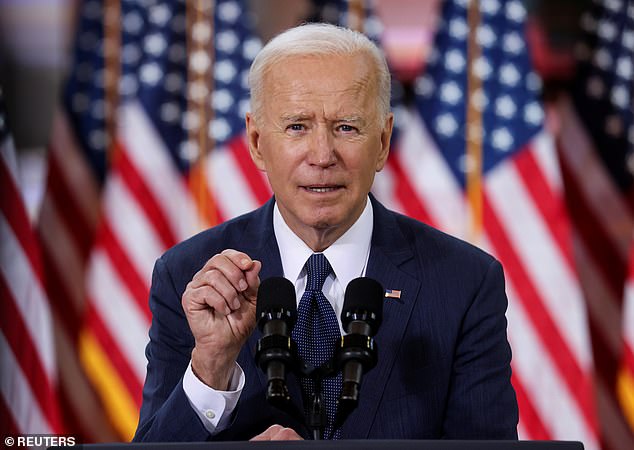 A $48 billion program would go for ‘American workforce development infrastructure and worker protection,’ and is described as through successful pre-apprenticeship programs such as the Women in Apprenticeships in Non-Traditional Occupations.’

‘This will ensure these underserved groups have greater access to new infrastructure jobs,’ according to the plan.

Included amid ‘persistent economic inequalities’ would be $12 billion for workforce development in ‘underserved communities,’ with as well as $5 billion over eight years for ‘evidence-based community violence prevention programs.’

‘President Biden also will call upon Congress to ensure that new jobs created in clean energy, manufacturing, and infrastructure are open and accessible to women and people of color. President Biden is calling on Congress to also specifically target funding to workers facing some of the greatest challenges,’ the plan says.

All of it would move in the large $2.3 trillion package – with Senate Democratic leaders hinting they may seek to move it under new ‘reconciliation’ instructions to protect it from a likely GOP filibuster. The anticipated roadblocks for other legislation has induced Biden and his team to push a raft of proposals into the single plan.

Data have shown that minorities have been hard hit by the coronavirus and its economic effects. Minorities and women were also a key part of Biden’s winning electoral coalition.

The plan was developed ‘with equity in mind,’ it says. 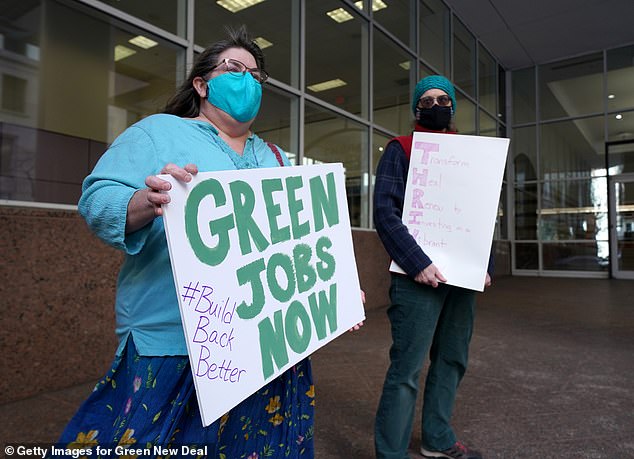 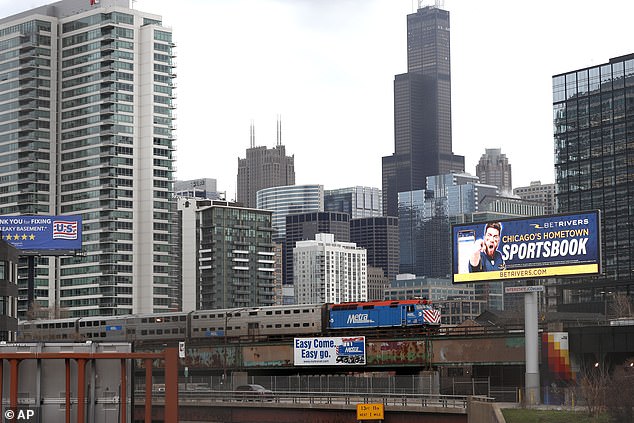 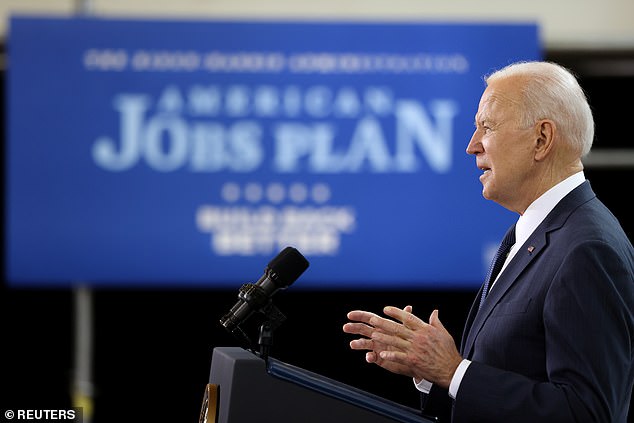 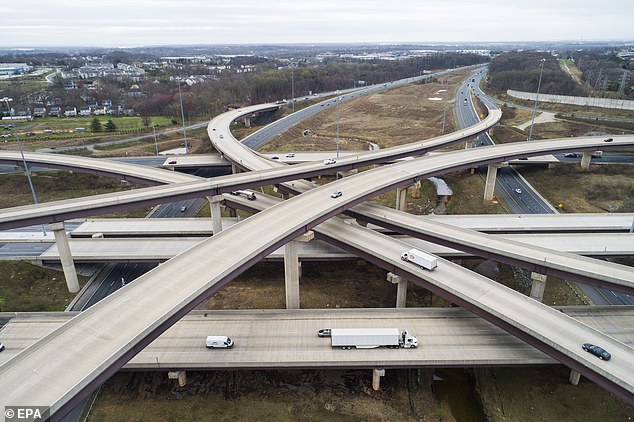 The infrastructure bill contains numerous programs intended to help remedy ‘historic inequities.’ Additional ‘human infrastructure’ projects are to be moved in a separate package in April. Some progressives fear they might not get enacted that way

‘Too often, past transportation investments divided communities – like the Claiborne Expressway in New Orleans or I-81 in Syracuse – or it left out the people most in need of affordable transportation options,’ it says. The Claiborne Expressway cuts through the Lower 9th Ward of New Orleans. A project touted by the Mayor of Syracuse proposes to remove 1.4 miles of elevated roadway that sliced through part of a mostly black neighborhood in the 1950s and 60s.

‘The President’s plan includes $20 billion for a new program that will reconnect neighborhoods cut off by historic investments and ensure new projects increase opportunity, advance racial equity and environmental justice, and promote affordable access,’ it says.

Funds to mitigate floods and disasters are also couched in language of safeguarding infrastructure and defending ‘vulnerable communities.’

‘People of color and low-income people are more likely to live in areas most vulnerable to flooding and other climate change-related weather events,’ it states.

A section of the package on prevailing wages and union jobs notes states that: ‘This is especially important for workers of color and for women, who have endured discrimination and systematic exclusion from economic opportunities for generations.’

‘All of us deserve to enjoy America’s promise in full — and our nation’s leaders have a responsibility to overcome racial, gender, and other inequalities to make it happen. To that end, the President is calling on Congress to create new, good-quality union jobs for American workers by leveraging their grit and ingenuity to address the climate crisis and build a sustainable infrastructure,’ it stsates.

Biden ‘Biden is calling on Congress to update the social contract that provides workers with a fair shot to get ahead, overcome racial and other inequalities that have been barriers for too many Americans, expand the middle class, and strengthen communities,’ according to the plan.

The plan, which the White House released Wednesday as the Derek Chauvin trial for the death of George Floyd was getting underway, includes a proposed $10 billion to enforce its workforce proposals, while calling for increased penalties for employers who break safety and health rules.

‘President Biden is calling on Congress to provide the federal government with the tools it needs to ensure employers are providing workers with good jobs – including jobs with fair and equal pay, safe and healthy workplaces, and workplaces free from racial, gender, and other forms of discrimination and harassment,’ it states.

Most Republican critics of the plan have focused on its tax hikes, while singling out its push for green infrastructure.

Also blasting the plan was Sen. Rob Portman of Ohio – a center-right lawmaker from a rust belt state who is among lawmakers retiring in 2022.

‘At its core, the president’s plan calls for a $620 billion investment in transportation infrastructure. However, the total soars to $3 trillion with its inclusion of these broad policy priorities that are a far cry away from what we’ve ever defined as infrastructure,” said Portman.

‘The Biden Administration’s plan redefines infrastructure to include hundreds of billions of dollars of spending on priorities like health care, workforce development, and research and development.’

He called it the ‘wrong approach.’

‘The largest tax hike in American history in order to pay for the kind of Green New Deal spending outlined by President Biden today should be a nonstarter in Congress,’ said Rep. Liz Cheney (Wyo.), the chair of the House Republican Conference.

To pay for the plan, Biden is calling for tax hikes like an increase in the corporate rate, although even after a period of 15 years they would not pay for all of the plan, leaving about $1 trillion not paid for.

Meanwhile, some progressive Democrats are already attacking the plan for not being big enough – and fretting that health care and other ‘social infrastructure’ components might die if they all get included in a second package that might be less politically popular.

‘This is not nearly enough,’ said Rep. Alexandria Ocasio-Cortez (D-NY.). ‘The important context here is that it’s $2.25T spread out over 10 years. For context, the COVID package was $1.9T for this year *alone,* with some provision lasting 2 years.’

Loading...
Newer Post
Fury at plan to scrap Los Angeles Hardcore Gang unit because it is ‘offensive to the community’
Older Post
Prince William’s rift with Harry is ‘hardest’ thing he’s gone through since death of Princess Diana