PROFESSOR ROBERT DINGWALL says we must resist the biosecurity state 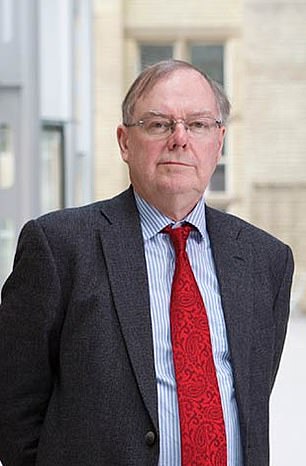 These are extraordinary times, and not just because we are coming through the greatest national trauma since the Second World War.

The vaccination programme is something close to a modern miracle. There is further good news in the startling success of the treatments we are pioneering for coronavirus patients. The UK is leading the world in these areas.

Yet, as the past week has shown, the nation is facing another threat – one which is both unprecedented and deeply troubling.

We are witnessing the birth of what you might call the ‘biosecurity state’, a new world in which politicians and the scientists who advise them decide that suppressing disease is more important than the human freedoms we take for granted.

We have made huge progress in fighting Covid-19, with a 90 per cent drop in the rates of hospitalisation and death. The crisis, if not completely over, is by any reasonable measure now close to its end.

Why, then, has the Government voted through laws allowing it to impose draconian restrictions for another six months? 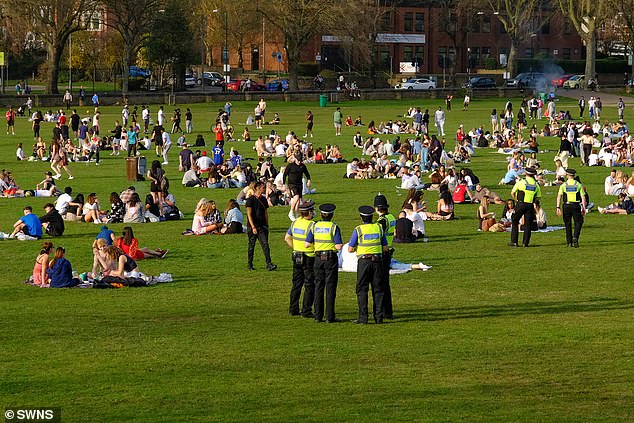 ‘We are witnessing the birth of what you might call the “biosecurity state”, a new world in which politicians and the scientists who advise them decide that suppressing disease is more important than the human freedoms we take for granted,’ writes Professor Robert Dingwall. Pictured: Crowds gathering at the Forest Recreation Ground in Nottingham this week

There is talk of vaccine passports simply to visit a pub or watch a play. Foreign holidays seem to be on indefinite hold.

Many Government advisers are determined to keep us in restrictions beyond June 21 – the promised end of lockdown.

If they have their way, this will not be the great day of release but a ‘new normal’ in which medical scientists stay close to the heart of power and shape the way we live, as the lives we once enjoyed fade to a distant memory.

I am not exaggerating.

When Chief Scientific Adviser Sir Patrick Vallance and Chief Medical Officer Professor Chris Whitty addressed the House of Commons Science and Technology Committee, they described a future in which we will be indefinitely constrained by the need – as they see it – to keep infections to the lowest possible level.

In their view, vaccination does not mean liberation. It is merely an addition to social distancing, face covering, hand hygiene, Perspex screens and aggressive test and trace.

As Sir Patrick told the MPs: ‘The more we can make a routine around hygiene matters, ventilation and so on, the better it is.’

Better for whom? Who gets to decide? 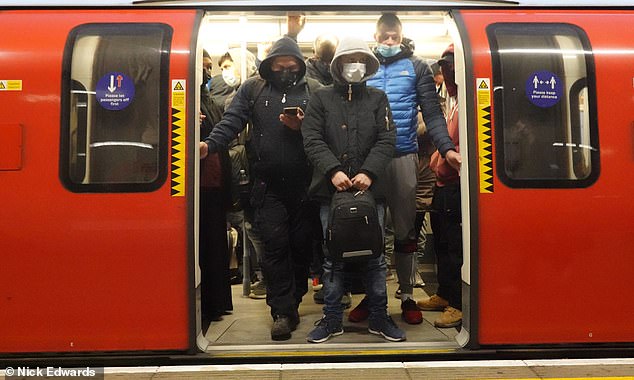 Pictured: Commuters at Canning Town Underground Station on the Jubilee Line England in currently in Lockdown due to Covid 19, on March 29, 2021, after some Covid-19 restrictions were relaxed

Sir Patrick envisages that scientists will advise governments when to ‘release’ citizens from restrictions, regardless of the vaccine success. The citizens don’t get a say.

What, then, are the supposed justifications for preventing us enjoying our ‘old’ freedoms? Foremost is the colourful claim that letting the virus circulate risks new mutations.

It is increasingly clear, however, that even the current Covid variants of concern – from Brazil and South Africa, for example – are unlikely to defeat the vaccines, despite the many and repeated claims by mathematical modellers (who are not, I should point out, experts in genetics).

We would be better listening to California’s world-leading La Jolla Institute for Immunology, which recently concluded that new variants seem less dangerous than previously feared.

Or Andrew Pollard, who led the clinical trials for the Oxford-AstraZeneca vaccine and told Radio 4 that it’s time ‘to start moving away from an obsession with each variant as it appears’.

The vaccines can easily be tweaked to match new strains. Moreover – as La Jolla points out – these mutations do not seem to have an impact on T-cells, part of our immune system which, although they act more slowly than antibodies, make the biggest contribution to reducing the severity of an infection. Second-generation vaccines now close to introduction will be even harder to ‘escape’.

Then there is the claim is that even more people will die of Covid-19 unless we continue to control the population with intrusive precautions. What about, for example, those who refuse to take the jab or for whom it fails? 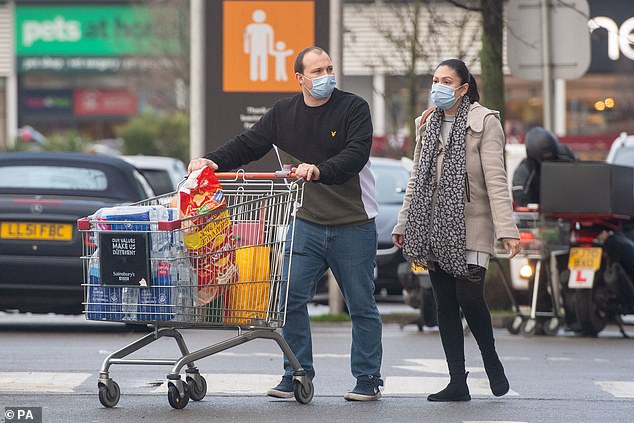 ‘There is talk of vaccine passports simply to visit a pub or watch a play. Foreign holidays seem to be on indefinite hold, writes Professor Robert Dingwall. ‘Many Government advisers are determined to keep us in restrictions beyond June 21 – the promised end of lockdown.’ Pictured: Shoppers wearing facemasks at a supermarket in London

It is true that no vaccine is 100 per cent effective, but this is likely to be a fairly small group of people – probably fewer than those who have an influenza jab yet fail to develop an effective response.

Some will refuse to be vaccinated. They must accept responsibility for their choice but, remember, they are no threat to the rest of us. We are protected by our own decision to accept the vaccine.

There are groups who have not yet been persuaded to accept the jabs. This is a challenge to the health service and local government to be more imaginative and culturally sensitive in delivering the rollout.

And some people will have existing conditions that weaken their immune systems, but they would always have been advised to avoid infection from any virus or bacteria.

Yes, there will be some level of risk involved after June 21, but risk is part of life. And context is all.

But if we adjust for the increasing size of the population, this is about ten per 1,000, the same level we had in the years around 2000 before we started annual flu vaccination.

But there was no social distancing when we celebrated the Millennium, no face masks and no school closures.

As I have said in these pages before, a vaccinated population should treat Covid-19 in the same way as it treats influenza. 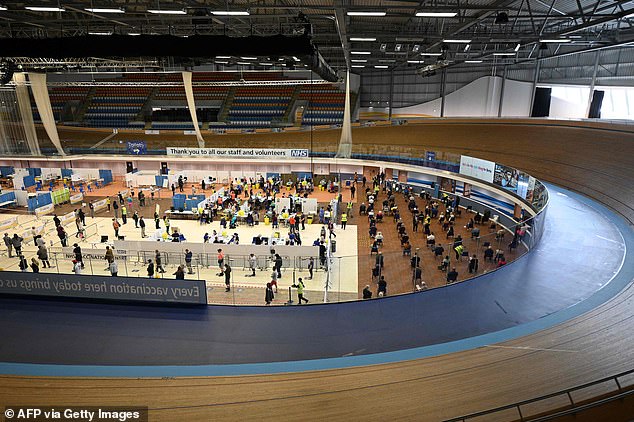 Pictured: People receive a dose of the BioNTech/Pfizer covid-19 vaccine at a vaccination clinic set up inside the Derby Arena at Pride Park in Derby, Derbyshire on March 31, 2021

In a bad year for flu, we can lose 20,000-25,000 people. With a largely vaccinated population, there are likely to be about 30,000 Covid-related deaths over the next 12 months, an average of about 80 deaths every day. This is about half of one per cent of the deaths we would normally expect to happen in that period.

And not all of these will be additional deaths. In many cases, Covid will just substitute for another respiratory infection.

Dr Susan Hopkins, an epidemiologist consultant in infectious diseases and microbiology from Public Health England, has pointed to the possibility we will suffer a bad flu season in 2021/22 because the level of population immunity has been pushed down by Covid restrictions in 2020/21.

Yes, there will be a level of risk involved after June 21, but risk is part of life

We might, then, talk about the dangers posed by normalising face masks and the other Covid restrictions – dangers which go beyond the dreadful toll on employment, mental health and life expectancy.

Humans seem to need some measure of exposure to infection to keep their immune systems in good shape. This winter’s challenge to the NHS may well come from flu rather than Covid.

Since 2010, death rates have been falling gradually, a testament to our health and social care services. Unfortunately, this also means that our elderly population has become more frail.

While no one wants unnecessary deaths, humans are not immortal. We could not expect the decline in death rates to go on for ever. Covid-19 is extremely dangerous for some and it has killed too many people, but we need perspective, not panic, when thinking of our future.

The American Centers for Disease Control – known for its cautious approach – has recently told fully vaccinated Americans that they can start to lead normal lives. Denmark seems likely to lift lockdown by the end of May.

We, too, should be allowed to take the same risk we do every year with other respiratory diseases. 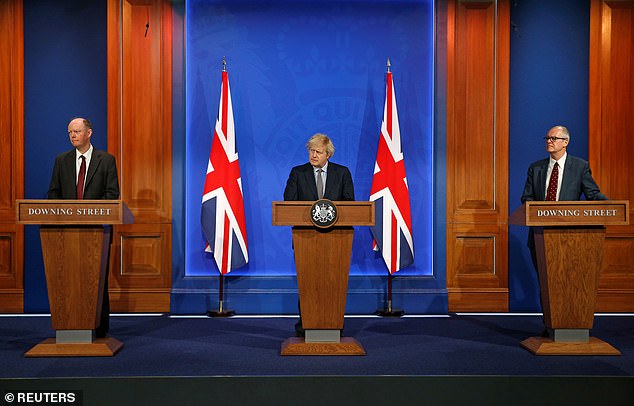 When Chief Scientific Adviser Sir Patrick Vallance and Chief Medical Officer Professor Chris Whitty (pictured right and left respectively, alongside Prime Minister Boris Johnson on March 29) addressed the House of Commons Science and Technology Committee, they described a future in which we will be indefinitely constrained by the need – as they see it – to keep infections to the lowest possible level

It is time for the Prime Minister and his advisers to level with the public and admit that some risk of sickness and death is the price we pay for leading normal lives. This is a view that Prof Whitty appeared to endorse only last week when he pointed out that we have long accepted a certain risk of infection and death from flu.

But why did he also say we should wait up to two years before normal life resumes – as if we are we setting a higher benchmark for Covid-19?

Or have those in power now privately concluded that the ‘new normal’ means permanently sacrificing our liberties in order to control disease, something that has never been a proper role of government? Will we be compelled to wear face masks in the winter months, but this time to guard against flu?

We need perspective, not panic, when thinking of our future

The risk of death from Covid-19 was already small for most people and will have been reduced by a further 98 per cent when Phase 1 of the vaccination programme is completed by early May (and all those aged over 50 have been offered full protection).

That is why June 21 should see a complete end to restrictions, not the limp substitute of a partial lifting.

There will be no need for test and trace, a dead-weight cost to the NHS.

Nor should we worry about quarantine for travellers and banning summer holidays abroad. Variants are as likely to crop up in Blackburn as in Benidorm, and are – if anything – less likely to defeat the vaccination programme than mutations of influenza.