Drug overdose deaths have soared by nearly 10 percent over the last year, early data from the Centers for Disease Control and Prevention (CDC) reveals

HEALTH NOTES: Could parasitic worms become the new weapon in the fight against dementia?
Prostate cancer patients could be spared radiotherapy after surgery
Couple engaged for 10 years finally marry at hospital bedside after husband’s cancer diagnosis

Drug overdose deaths have soared by nearly 10 percent over the last year, early data from the Centers for Disease Control and Prevention (CDC) reveals.

Provisional data shows deaths reached a record-high of more than 73,000 in March 2020 compared to March 2019 and are predicted to surpass 75,000 when counting is completed.

A total of 37 states have reported an increase in fatalities, with increases of as much as 50 percent over the previous year.

Opioids, including synthetic substances like fentanyl, were the driving culprit, accounting for nearly three-quarters of the deaths.

It comes after the CDC reported two years of steady declines in overdose death rates.

Experts say the already deadly opioid crisis has been worsened by the coronavirus pandemic, with many people turning to the drugs to cope with job losses and the deaths of loved ones. 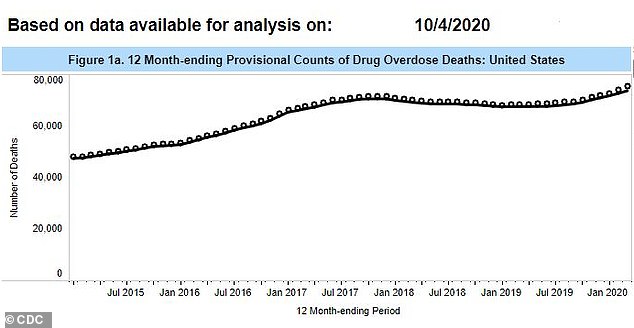 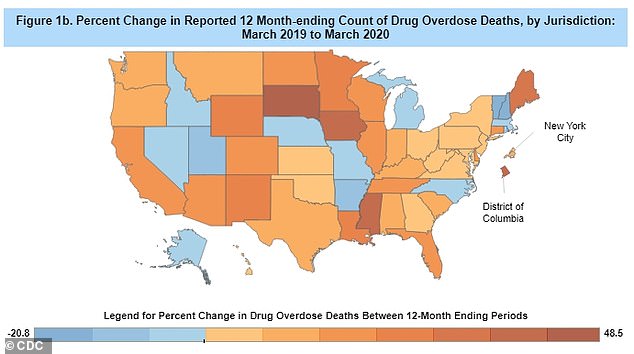 A total of 37 states aw increase South Dakota had the highest increase in deaths, followed by the District of Columbia, Iowa, Mississippi and Maine

The report, from the CDC’s National Center for Health Statistics, shows that last year, for the 12-month period ending in March 2019, a total of 67,726 overdose deaths were reported.

By comparison, for the 12-month period ending March 2020,73,860 drug overdose deaths have been counted.

All remaining 37 states saw increases ranging from minimal to large. 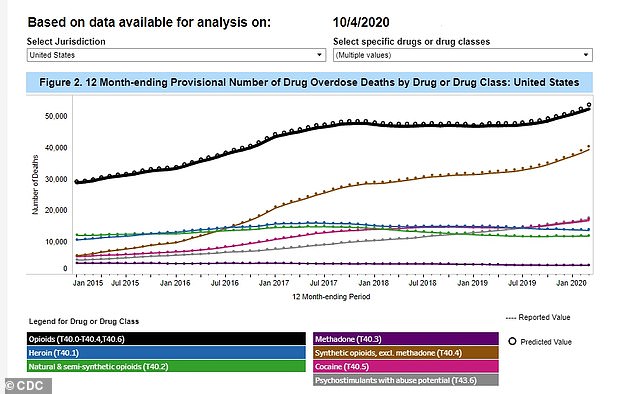 Opioids accounted for three-quarters of the deaths but the main drug used was fentanyl, the synthetic opioid 100 times stronger than morphine 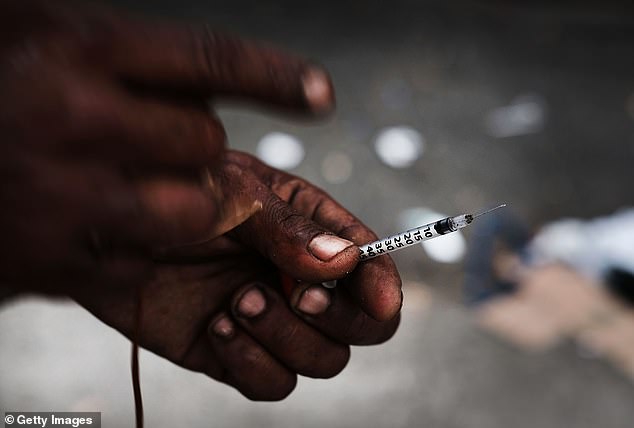 After two years of steady declines, experts say the coronavirus pandemic may be undoing the progress made in the opioid epidemic (file image)

HOW AMERICA GOT HOOKED ON OPIOIDS

Prescription opioids and illicit drugs have become incredibly pervasive throughout the US, and things are only getting worse.

In the early 2000s, the FDA and CDC started to notice a steady increase in cases of opioid addiction and overdose. In 2013, they issued guidelines to curb addiction.

However, that same year – now regarded as the year the epidemic took hold – a CDC report revealed an unprecedented surge in rates of opioid addiction.

Overdose deaths are now the leading cause of death among young Americans – killing more in a year than were ever killed annually by HIV, gun violence or car crashes.

In 2019, the CDC revealed that nearly 71,000 Americans died from drug overdoses.

It means that drug overdoses are currently the leading cause of death for Americans under 50 years old.

Rounding out the top five, respectively, were the District of Columbia, Iowa, Mississippi and Maine.

According to the CDC report, opioids accounted for more than 52,000 of the confirmed overdose deaths.

About 13,000 were tied to heroin, approximately 12,000 were linked to natural opioids, and about 2,700 were attributed to methadone.

However, more than 39,000 people died after using synthetic opioids, such as fentanyl, which is 100 times stronger than morphine.

The pattern of drugs involved in overdose deaths has changed in recent years, moving away from heroin and natural opioids to synthetic opioids.

At an American Medical Association (AMA) roundtable discussion last month, doctors noted that the pattern of drugs involved in overdose deaths has changed in recent years, moving away from natural opioids to synthetic opioids.

‘I think the most critical and top line message is that the epidemic has grown more deadly,’ Dr Patrice Harris, immediate past president of the AMA said at the meeting.

‘The overdoses and deaths are now fueled by illicitly manufactured fentanyl, methamphetamine, cocaine and heroin.

According to the Defense Intelligence Agency, China is the primary source of fentanyl and precursors used to make the drug.

These factory-produced drugs, which are cheap and easy to make, are sold either directly to the US or via trafficking networks set up in Mexico.

Additionally, in recent weeks, counties in states such as California and Nevada say much of it is driven by fentanyl.

According to the Southern Nevada Health District, Clark County – of which Las Vegas is part – saw 63 deaths involving fentanyl among residents up to August of this year.

Over the same period last year, there were 28 fentanyl deaths, which indicates an increase of 125 percent.

In San Diego, there have been 203 fentanyl-related deaths in the first six months of 2020, the US Drug Enforcement Administration reported.

By comparison, there were 152 fentanyl-related overdose deaths in San Diego County in all of 2019.

Loading...
Newer Post
More travel firms will go bust in the ‘coming weeks’ due to impact of Covid pandemic
Older Post
Boy, 17, ‘assaulted and killed his deaf mother’ at their home in Seattle