One in five children has a ‘vaccine hesitant’ parent

Nearly one in five US children has a parent who is wary about their kids receiving  vaccines, a new study finds. About 20 percent of youngst

Nearly one in five US children has a parent who is wary about their kids receiving  vaccines, a new study finds.

About 20 percent of youngsters have a mother or father described as ‘hesitant’ about childhood immunizations, the Centers for Disease Control and Prevention (CDC) revealed on Monday.

What’s more, black parents were significantly more likely than white parents to be reluctant about their children being inoculated and worried about potential side effects.

The findings come as health officials warn parents of a possible ‘twindemic’ this winter with both the flu and COVID-19 circulating at the same time, and worries that – when a vaccine for the new virus does become available – children not receiving it will put a barrier to controlling the pandemic.

A new report found that 19.5% of children- one in five – had at least on parents that expressed hesitancy about childhood vaccinations in 2019 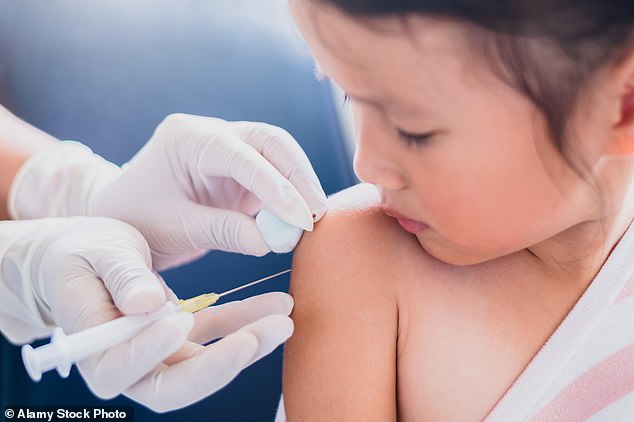 For the study, published in the journal Pediatrics, the team looked at data from both the 2018 and 2019 National Immunization Survey-Flu, which included questions about parents’ vaccine hesitancy.

In 2018, they found that 25,8 percent of parents expressed hesitancy about childhood vaccinations, and that fell to 19.5 percent in 2019.

Concern about long-term side-effects seemed to be the biggest factor in vaccine hesitancy with 27 percent in 2018 and 22 percent in 2019 saying it was impacting their decision.

Meanwhile, 23 percent in 2018 and 19 percent in 2019 said concerns about the number of jabs kids receive at once influenced their choice.

Additionally, 17 percent in 2018 and 14 percent in 2019 said their primary doctor or health care provider was not their most trusted source of information about childhood vaccines.

Responses varied by state with just 12.9 percent of parents in Vermont expressing vaccine hesitancy compared to to 25.4 percent in Mississippi.

The report also found that the parents of black children had the most hesitancy about vaccines, as well as concern about immunization schedules and side effects.

Nearly 30 percent of black parents reported being hesitant about childhood shots and concerned about their potential side effects.

By comparison, only 17.5 percent of white parents said they were concerned about childhood jabs and 19.9 percent said they were worried about side effects.

Additionally, more than 22 percent of black parents said they were skeptical about how many shots a child receives at one time in comparison wiht 18 percent of white parents.

As of Tuesday, more than 900,000 cases of COVID-19 have been reported in children, according to the American Academy of Pediatrics.

Because children rarely experience symptoms – let alone need to be hospitalized – cases are believe to be very underreported.

However, a study in July found kids age five or younger had coronavirus loads between 10-fold and 100-fold greater in their upper respiratory tract, implying young children can spread the virus just as easily as teenagers.

This means that children who don’t get vaccinated may spread COVID-19 to others and prevent the US from getting control of the pandemic.