Starting bids begin at £0 for Welsh three-bed home with two reception rooms (but there is a catch)
Joe Biden’s new economic team, including Janet Yellen, revealed
The Simpsons are UK’s favourite TV family with Trotters second

Nigel Farage has blasted Boris Johnson for failing to strike a post-Brexit trade deal with the US while Donald Trump was in the White House as he claimed Joe Biden ‘hates the UK’.

The leader of the Brexit Party and prominent ally of Mr Trump said Mr Johnson had ‘four years to do a trade deal’ with a ‘pro-UK President’.

But he claimed Mr Biden’s victory in the US Presidential election means there is now ‘no chance’ of a deal being done between the two sides.

His comments came as Mr Johnson insisted he believes there is a ‘good chance’ of striking a transatlantic trade accord but he warned the US are ‘tough negotiators’. 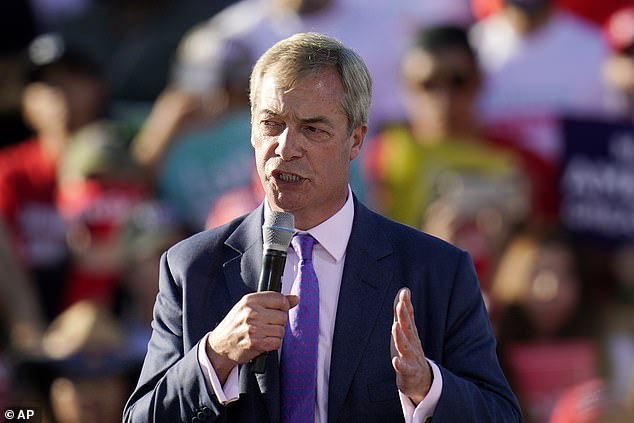 Nigel Farage, pictured speaking at a campaign rally for Donald Trump on October 28 in Arizona, has claimed Joe Biden ‘hates the UK’ 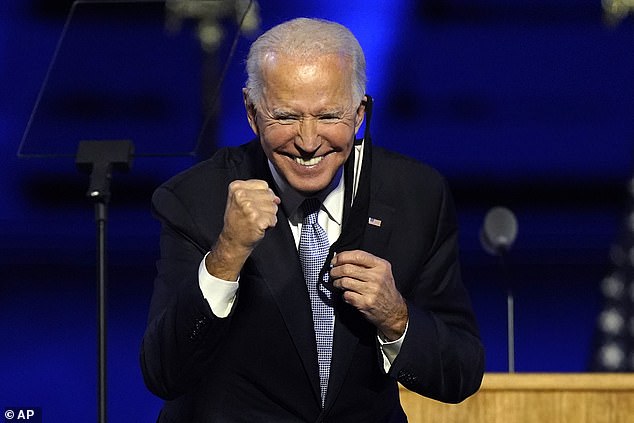 Mr Farage, the leader of the Brexit Party, said Boris Johnson had ‘four years to do a trade deal’ with a ‘pro-UK President’ in Donald Trump as he lashed out at Mr Biden

Mr Farage tweeted a TV clip of Mr Biden on the campaign trail being asked by a journalist for a ‘quick word for the BBC’.

Mr Biden replied ‘the BBC? I’m Irish’ before smiling and moving away.

Mr Farage tweeted: ‘As you can see from this clip, Biden hates the UK.

‘The Conservatives had 4 years to do a trade deal with the USA and pro-UK President, and they failed. There is no chance now.’

Mr Biden, who has Irish ancestors, opposed the UK leaving the European Union and views it as a mistake.

Some critics have argued it may have been easier for Mr Johnson to negotiate a trade deal with Mr Trump because the White House incumbent backed Brexit and because the two men appeared to have a close relationship.

But others claimed Mr Trump’s protectionist approach to trade policy would have made it difficult for Downing Street to strike a beneficial accord with the US.

Regardless, the change in US leadership will inevitably mean that trade talks between the two sides will be delayed.

Mr Johnson today said the US are ‘tough negotiators’ and he anticipated hard negotiations whoever was in the White House.

Asked if the delay to US trade talks made striking a deal with the EU before the end of the transition period in December more important, Mr Johnson said: ‘I’ve always been a great enthusiast for a trade deal with our European friends and partners, I think it is there to be done.

‘The broad outlines are pretty clear, we just need to get on and do it if we can. I’ve said that to Ursula von der Leyen [President of the European Commission] just yesterday and she totally agrees with me.

‘On the trade deal with the US, I am a keen student of the United States’ trade policy and they’re tough negotiators, and I’ve never believed this was going to be something that was going to be a complete pushover under any US administration.

‘I think there is a good chance we’ll do something – Liz Truss [International Trade Secretary] and her team’s made a huge amount of progress – and we’ll get on.’