House Speaker Nancy Pelosi was back in the Oval Office Friday after being banished from the White House for the last 15 months of former President Donald Trump‘s tenure.

‘I’m so delighted to be at the White House, and I know I can speak for all of our colleagues when I say that, to visit with President Biden and Vice President Kamala Harris,’ Pelosi said after she and House Democratic leadership and committee chairs emerged from the West Wing after an Oval Office meeting with President Joe Biden.

Pelosi laughed for several seconds when a reporter asked her how this meeting was ‘different’ than some of those she had at the White House during the Trump era. 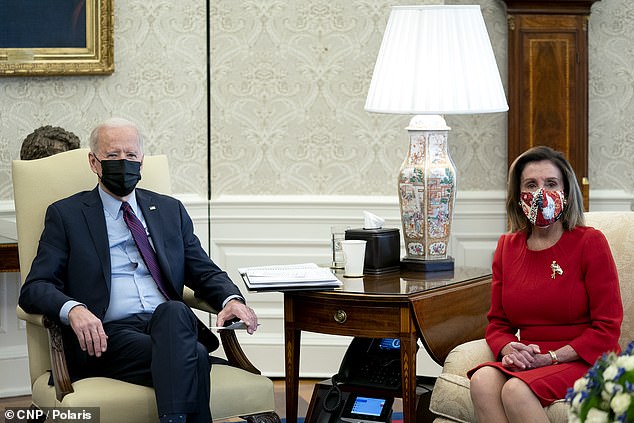 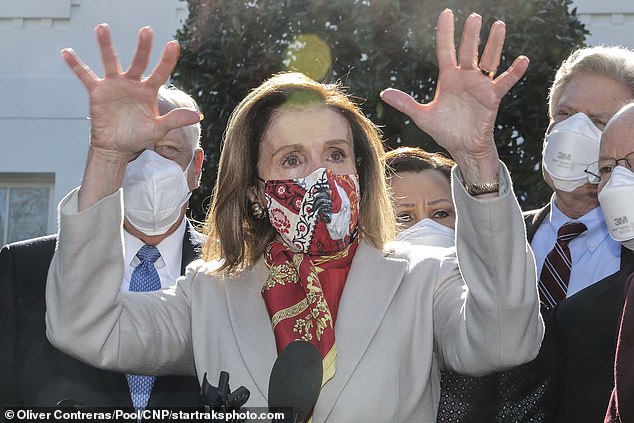 House Speaker Nancy Pelosi laughed when asked by a reporter how Friday’s meeting was ‘different’ from those of the recent past. ‘Do you really have to ask?’ she replied, saying she was ‘delighted’ to be meeting with President Joe Biden in the Oval Office 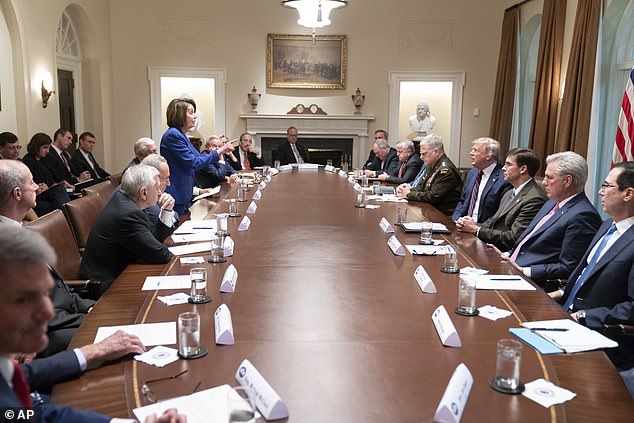 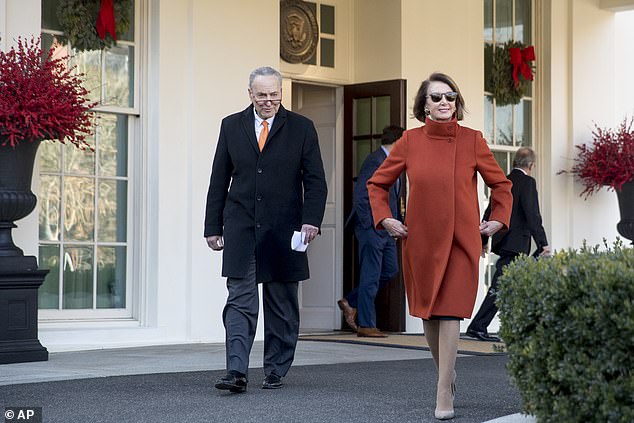 DECEMBER 2018: House Speaker Nancy Pelosi’s (right) look went viral as she emerged from a meeting a month before ascending to the speakership. During her back-and-forth with Trump, she referred to the coming government shutdown as the ‘Trump shutdown,’ annoying him

‘Do you really have to ask?’ Pelosi said once she’d gained composure from her giggle.

‘I mean, it was – as I said to the president at the beginning, as a figure of speech people will say, “I’m delighted to be here,” but I know I speak for all of my colleagues when I say we are really delighted to be here, for what it means to the American people,’ Pelosi then said.

The House speaker hadn’t been on White House grounds for a meeting with a president since her October 2019 dust-up with Trump over his administration’s Syria strategy.

That meeting, in the Cabinet Room, produced the image of Pelosi standing and pointing a finger at Trump, while the president looked at the Democratic leader with disgust.

‘She kept her cool completely,’ Schumer said. ‘But he called her a third-rate politician. He said that there were communists involved and you guys might like that.’

‘I mean this was not a dialogue, it was sort of a diatribe, nasty diatribe not focused on the facts,’ Schumer added.

Pelosi said into the microphones outside the West Wing, ‘What we witnessed on the part of the president was a meltdown, sad to say.’

Reports from the meeting said that Trump had yelled after the Democrats, ‘See you at the polls.’

Another notable meeting came as Pelosi was about to ascend to the speakership after the 2018 midterms.

The White House and Congress were at an impasse over appropriations for the next year because Trump wanted his promised border wall between the United States and Mexico funded.

‘I think the American people recognize that we must keep government open, that a shutdown is not worth anything, and that you should not have a Trump shutdown,’ Pelosi told Trump in front of reporters.

The two then squabbled in front of the press for several minutes.

Afterward, Pelosi came out to talk to reporters wearing a red Max Mara coat and sunglasses – an image that went viral.

She walked out to that same position after meeting with Biden Friday.

‘In terms of this meeting, the president was his usual values-based, knowledge-informed and strategic thinking in his presentation,’ she said. ‘It was a joy to hear his commitment to meeting the needs of the America people, open, as we all are, to bipartisanship, but nonetheless interested in getting results as soon as we can in the best possible way.’

Her No. 2, House Majority Leader Steny Hoyer, also remarked how different the meeting with Biden was than those of the recent past.