Top Chicago prosecutor Kim Foxx has dropped out of an upcoming debate against her Republican opponent for state attorney because she claims he will resort to ‘Trump-like name calling’.

Foxx, the Cook County State’s Attorney who caused outrage over her handling of the Jussie Smollett case last year, revealed on Wednesday that she will no longer debate her rival Pat O’Brien.

The Democrat accused O’Brien of calling her a ‘cheerleader of criminals’ and a ‘social worker’ during recent interviews.

Foxx claimed that name calling was likely to continue if the debate went ahead. 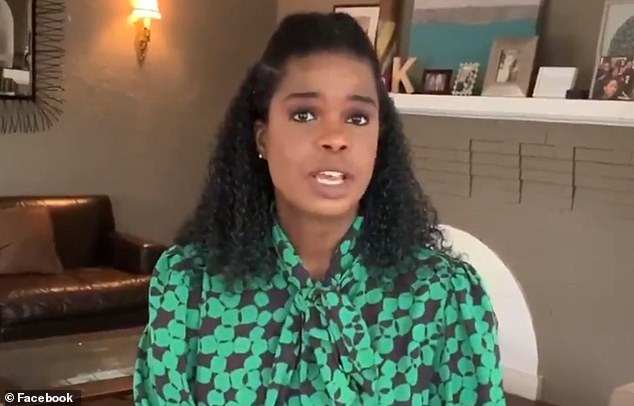 Kim Foxx, the Cook County State’s Attorney who caused outrage over her handling of the Jussie Smollett case last year, revealed on Wednesday that she will no longer debate her rival Pat O’Brien

‘Voters deserve to hear Mr. O’Briens platform. However, we learned during the recent Ed board interviews, that the State’s Attorney participated in with Mr O’Brien, that he will instead use the time for Trump-like name-calling and fearmongering,’ the Foxx campaign said.

‘The State’s Attorney will always participate in interviews… But during this nationwide crisis, she will not sit across the stage from a Republican that exploits tragedy to win a campaign. We had plenty of that last night. Voters deserve better.’

Her decision to drop out came a day after the first presidential debate between President Trump and Joe Biden descended into chaos with the pair repeatedly shouting over each other.

O’Brien hit back and called Foxx’s move a disservice to the people of Cook County.

‘It seems to me that the voters have a right in this kind of setting to hear both of us answer questions and challenge each other on our answers,’ O’Brien told the Chicago Sun Times.

‘She’s relying on the fact that this is a Democratic county and that ‘D’ beside her name will probably mean more votes.’

In a follow up tweet, O’Brien accused Foxx of not wanting to answer questions about releasing violent criminals. 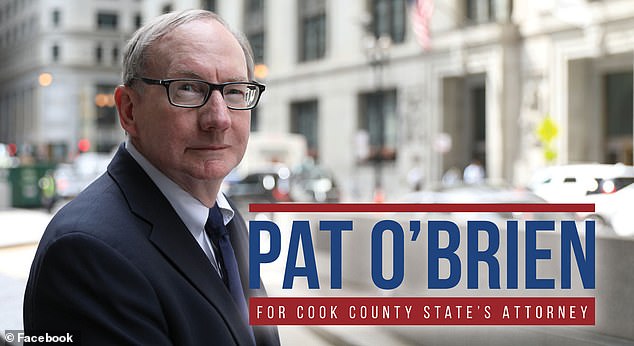 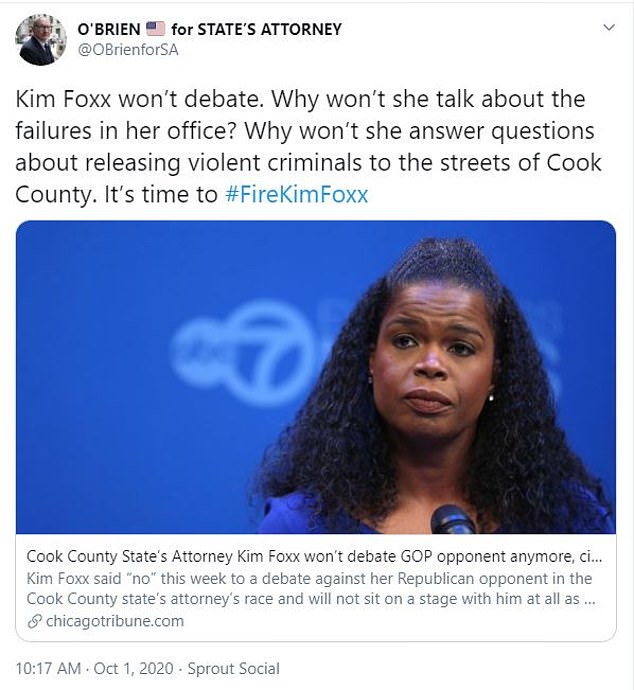 ‘Kim Foxx won’t debate. Why won’t she talk about the failures in her office? Why won’t she answer questions about releasing violent criminals to the streets of Cook County. It’s time to #FireKimFoxx,’ he said.

Foxx said that she will participate in interviews instead of the debate.

It is not clear if she will participate in a future debate scheduled for October 26.

Foxx gained notoriety last year when she dropped felony charges against Jussie Smollett, the Empire actor accused of staging a racist, homophobic attack on himself in January 2019.

A report published last month by the Sun Times said Foxx had dismissed more than 25,000 felony cases, including many involving violent murder charges, in her first three years on the job.

That rate is 35 percent higher than her predecessor, the report said.

Foxx took over as state’s attorney in 2016 with a promise to bring criminal justice reform and to reduce the population of Cook County Jail.

The Democrat is now up for re-election in November after beating three challengers in a tight race that was one of the most expensive of its kind.