Cindy McCain is taking on an advisory board role for Biden’s transition team, which will help usher the former vice president into the Oval Office in the next two and a half months, The Wall Street Journal reports.

Senator John McCain served in Congress for decades and ran for president in 2008, when he lost to Barack Obama.  Biden was the vice president on the Obama ticket.

In an interview with Good Morning America after Biden’s victory, Cindy celebrated the election results and told Republicans: ‘It’s time not just for Americans to get together and work together, but most importantly, it’s time that we Republicans put country first, not party.’

She also requested Trump concede to Biden in a ‘gracious manner’ like her late husband did upon his 2008 election defeat.

Trump has refused to concede, and has insisted, without evidence, that Democrats have tried to steal the election with rampant voter fraud. 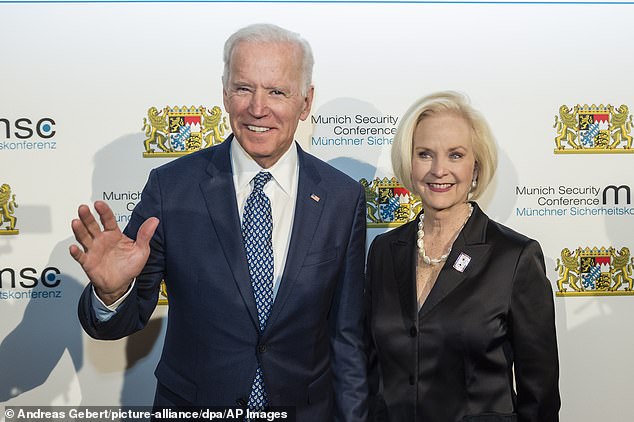 Cindy McCain is joining Joe Biden’s transition team in an advisory board role. The two are pictured together at an event in 2018. 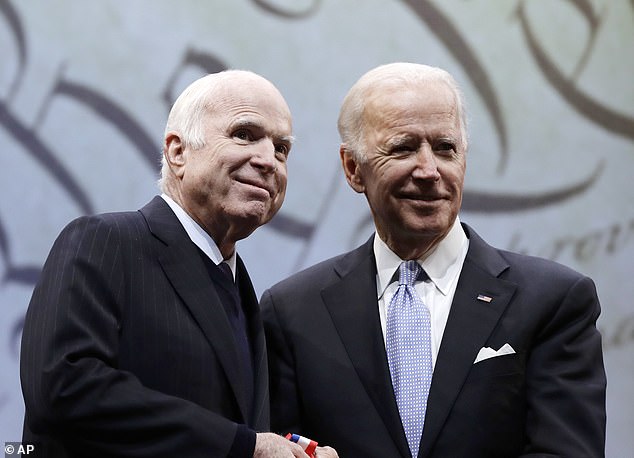 Cindy McCain is the second Republican to join the transition team, following in the footsteps of Bob McDonald, who also served as the Secretary of Veteran Affairs for several years under Obama.

McCain is a businesswoman and philanthropist in her own right and will advise the transition team on issues facing women and children, according to the New York Post.

The advisory board has already met once and will meet again some time in the next few weeks.

McCain’s inclusion on the transition team marks the continuation of a fruitful alliance between her and Biden.

She was one of the most outspoken Republicans to endorse Biden in his race against incumbent Republican Donald Trump.

‘My husband John lived by a code: country first. We are Republicans, yes, but Americans foremost. There’s only one candidate in this race who stands up for our values as a nation, and that is @JoeBiden,’ McCain stated in her Twitter endorsement in September.

She also participated in the Democratic National Convention in August, where she lauded the positive relationship between her late husband and Biden. 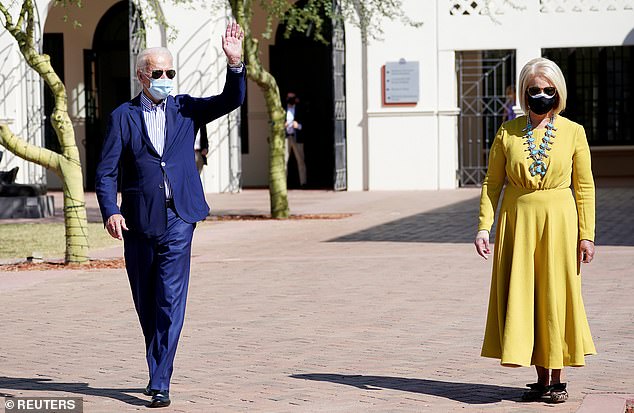 McCain previously endorsed Biden and celebrated his electoral victory this week. The pair are pictured together in Phoenix, Arizona on October 8, 2020

Trump has yet to concede the election, which was projected by every major news outlet for Biden on Saturday morning.

The Associated Press projected McCain’s home state of Arizona for Biden this week.

Trump criticized John McCain several times during his presidency, calling him a ‘loser’.

He once claiming McCain was not a war hero for his service in Vietnam, adding ‘I like people who weren’t captured.’

McCain served in the United States Navy during the Vietnam War and was taken captive by North Vietnamese troops after he was seriously injured when his plane was shot down. He was a prisoner of war until 1963.

McCain’s daughter this weekend said she is ‘relieved’ to have a president that respects prisoners of war as she saluted Biden securing the 2020 presidential election.

The longtime Republican took to Twitter on Saturday just moments after it was announced that Biden won his home state of Pennsylvania.

She said: ‘Only a very personal note – I am relieved and look forward to having a president who respects POW’s who have been captured. I had to say it.’

A month into his 2016 presidential run, in July 2015, Trump disparaged McCain at an event with pollster Frank Luntz.

Trump pointed out how he had supported McCain’s 2008 presidential bid, which he lost to Democrat Barack Obama.

‘I never liked him as much after because I don’t like losers,’ Trump told the crowd, which broke out in laughter.

Luntz then pointed out that McCain, a prisoner of war in Vietnam, was a ‘war hero.’

‘He was a war hero because he was captured,’ Trump uttered. ‘I like people who weren’t captured,’ the president said then.

The McCain-Trump relationship never thawed by the time Arizona senator died in August 2018.