Jim Carrey has announced the end of his career as a political cartoonist after spending much of the last four years skewering the Trump administration with provocative drawings he posted online.

The actor, whose cartoons have included an image of Trump with a swastika on his forehead and blamed Fox News for downplaying the coronavirus crisis, said it was ‘time to rest my social media gavel and reclaim a little neurological bandwidth’.

Comparing Trump to a ‘madman at the wheel of a bus’, he told his 19million Twitter followers on Saturday – a month exactly after Trump left office – that he had been on a ‘quest to rid our democracy of Orange Julius Caesar and his Empire of Lies’.

Carrey, 59, accompanied the message with a drawing invoking his character in The Truman Show, with the quote: ‘In case I don’t see ya… [good afternoon, good evening and goodnight].’ 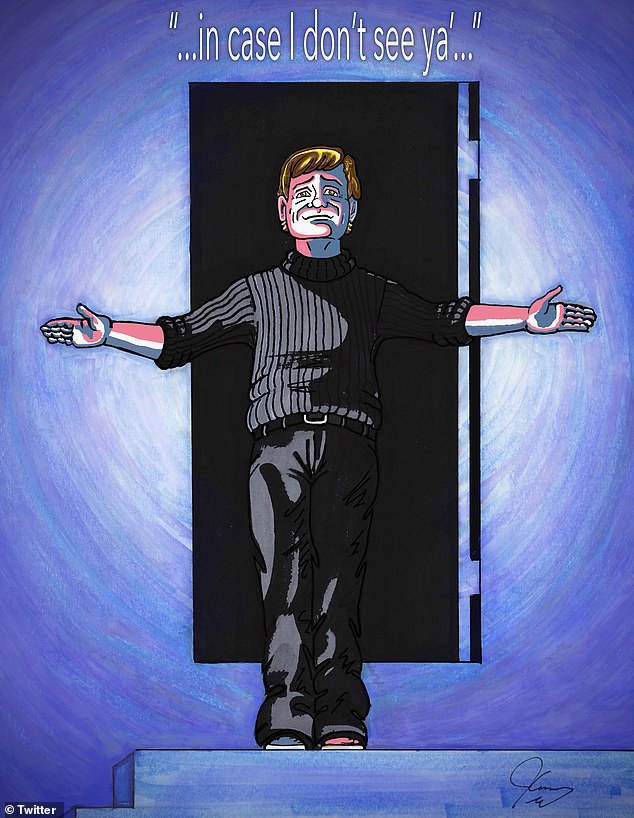 Goodbye: Jim Carrey said on Saturday that he was ending his career as a political cartoonist, posting this image invoking his character in the movie The Truman Show 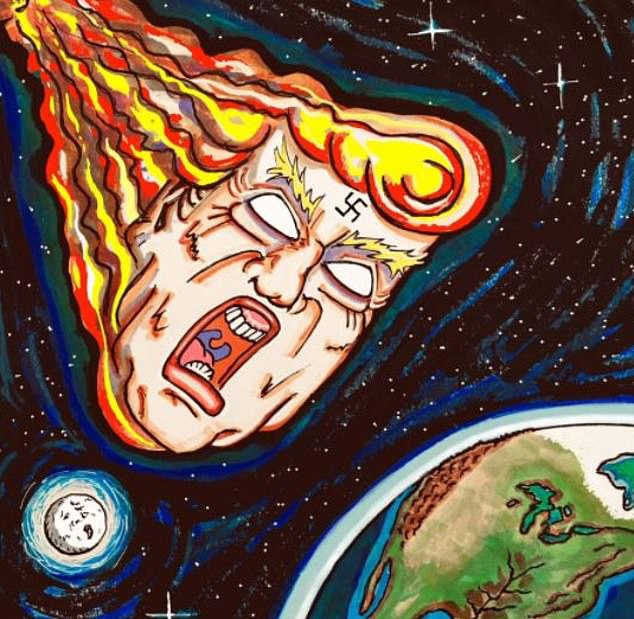 One of Carrey’s cartoons shows a meteor-like figure with Trump’s head and hair in a flaming ball of streaking fire as it heads for Earth. A swastika is seen on Trump’s forehead 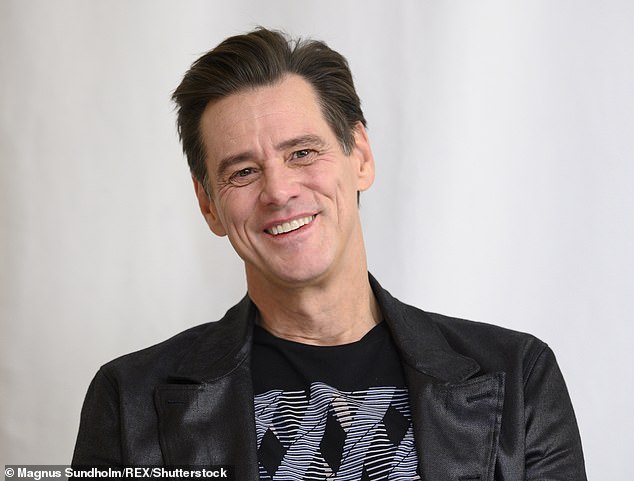 Carrey, pictured, said it was ‘time to rest my social media gavel and reclaim a little neurological bandwidth’

Carrey’s message on Saturday said: ‘Hey folks… for the past four years, among other commitments, I put considerable effort into this collection of political protest cartoons.

‘It truly feels as though you and I have crossed an ocean of outrage together… but something tells me it’s time to rest my social media gavel and reclaim a little neurological bandwidth.

‘If it seemed like I was ignoring my many Twitter followers here and outside the US and Canada in my quest to rid our democracy of Orange Julius Caesar and his Empire of Lies, it was not my intention.

‘I just assumed that a radicalized America is a threat to us all. When a madman grabs the wheel of a bus loaded with innocent passengers and threatens to drive it off a cliff, it tends to steal everyone’s focus.

‘You always have and always will occupy a sacred space in my grateful heart. Thank you all kindly for your patience, your support, your humor and your beautiful fanart.’

Carrey had often portrayed Trump in grotesque fashion, drawing him last October as a werewolf presiding over a ‘house of horrors’.

In 2019, he drew Trump’s face as a flaming meteor – with his forehead branded with a swastika – hurtling towards planet Earth.

‘If the Craven Republican Senate allows this vile miscreant to continue encouraging devisiveness [sic], the Trump Presidency will become an EXTINCTION LEVEL EVENT,’ he said. 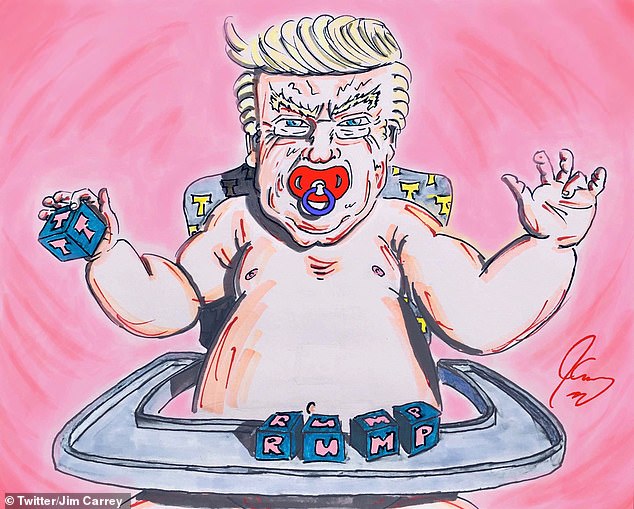 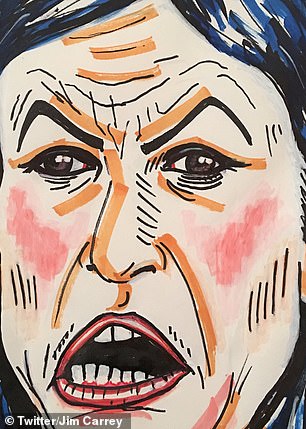 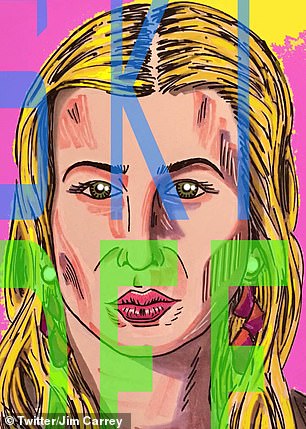 Another drawing mocked up Trump as Elvis Presley, with some of his lyrics adapted to Republicans including Mike Pence and Mitch McConnell: ‘They’re caught in a trap, they can’t walk out, because they love me too much baby.’

Attacking McConnell for his opposition to gun control in 2019, Carrey raged that ‘what Osama bin Laden did to us was terrible but he doesn’t hold a candle to Mitch McConnell’.

On another occasion, he drew controversy with an unflattering cartoon of Trump’s then-press secretary Sarah Huckabee Sanders.

The sketch was blasted as sexist and bigoted by Sanders’s father, the former Arkansas governor and GOP presidential candidate Mike Huckabee.

Carrey acknowledged that his cartoons veered into crassness, but said they were a creative way to express his political opinions.

He described the drawings as a civilized response to what he called the unfolding ‘nightmare’ of the Trump administration. 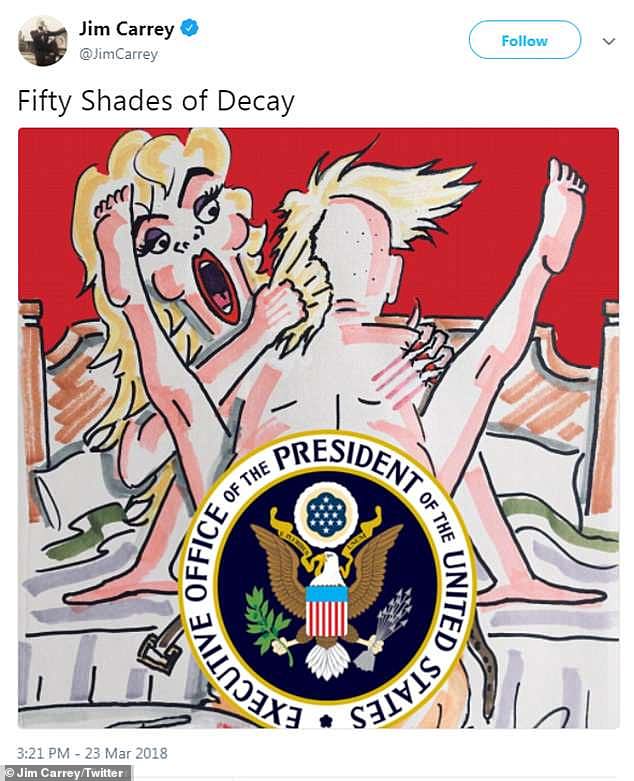 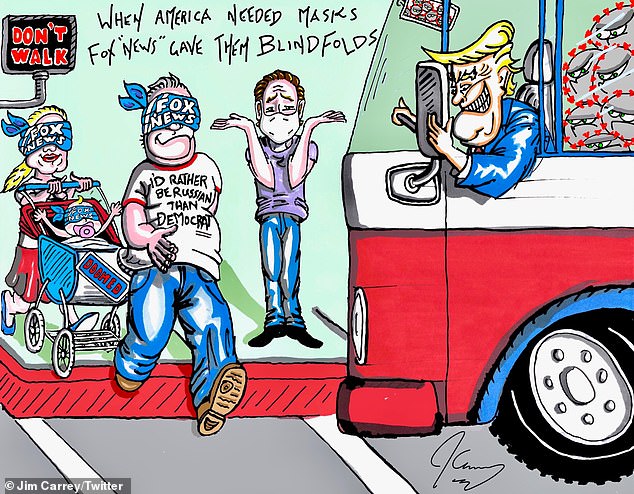 In a cartoon attack on Trump and Fox News during the pandemic, Trump drives a GOP bus towards a crosswalk where a blinded family of Fox viewers are crossing: ‘When America needed masks Fox “News” gave them blindfolds’

In early 2020, he claimed he was done making anti-Trump art, but the drawings soon resurfaced as he voiced his fury at the 45th president’s handling of the pandemic.

Last May he used one of the cartoons to attack British PM Boris Johnson, who has often been compared to Trump and likewise criticised for his pandemic response.

But he has been complimentary about Democrats including President Biden as well as Stacey Abrams who was seen as key to the left’s electoral success in Georgia.

‘Behold! Joseph R Biden, a real president working for the benefit of the entire nation and not just to enrich himself by Manipulating Angry Gullible Anarchists,’ he wrote in a cartoon last month, spelling the initials MAGA.

After Biden’s inauguration, Carrey said he had ‘wept with joy and relief’ – having earlier posted a cartoon captioned ‘Ding Dong, the Witch is Dead’.