Gene mutation makes people more likely to fall in love by oxytocin
Apple Watch heart monitor is falsely warning people their heart is at risk, study reveals
More rain and thunder is due on wet weekend

The former Labour leader said the decision to settle a High Court case today over a BBC Panorama investigation into the party was ‘disappointing’ and claimed legal advice was that Labour had a ‘strong case’.

The move by Sir Keir Starmer’s party, which also apologised to the seven, is part of a settlement aimed at drawing a line under allegations made during Mr Corbyn’s leadership that the party had allowed the overt hatred of Jewish people to fester.

The whistleblowers sued the party for defamation after the bombshell Panorama investigation last year – and MailOnline understands the party paid out £500,000 in compensation and legal fees.

The decision was welcomed by MPs and Jewish Labour activists who have long campaigned against anti-Semitism within the party.

But in a sign that the move could reignite factional infighting with the party’s hard Left element, Mr Corbyn and his followers including Unite leader Len McCluskey attacked the payout.

Writing on Facebook Mr Corbyn said: ‘The Party’s decision to apologise today and make substantial payments to former staff who sued the party in relation to last year’s Panorama programme is a political decision, not a legal one.

‘Our legal advice was that the party had a strong defence, and the evidence in the leaked Labour report that is now the subject of an NEC inquiry led by Martin Forde QC strengthened concerns about the role played by some of those who took part in the programme.’

Mr McCluckey, whose union is Labour’s largest financial backer, tweeted: ‘Today’s settlement is a misuse of Labour Party funds to settle a case it was advised we would win in court.

‘The leaked report on how anti-Semitism was handled tells a very different story about what happened.’

But former Labour MP John Mann, now an independent adviser to the Government on anti-Semitism, tweeted: ‘The bravest of the brave are the Labour staff members who did what was right.

And at Prime Minister’s Questions today, when Mr Corbyn’s leadership came up, Sir Keir said the party was ‘under new management’. 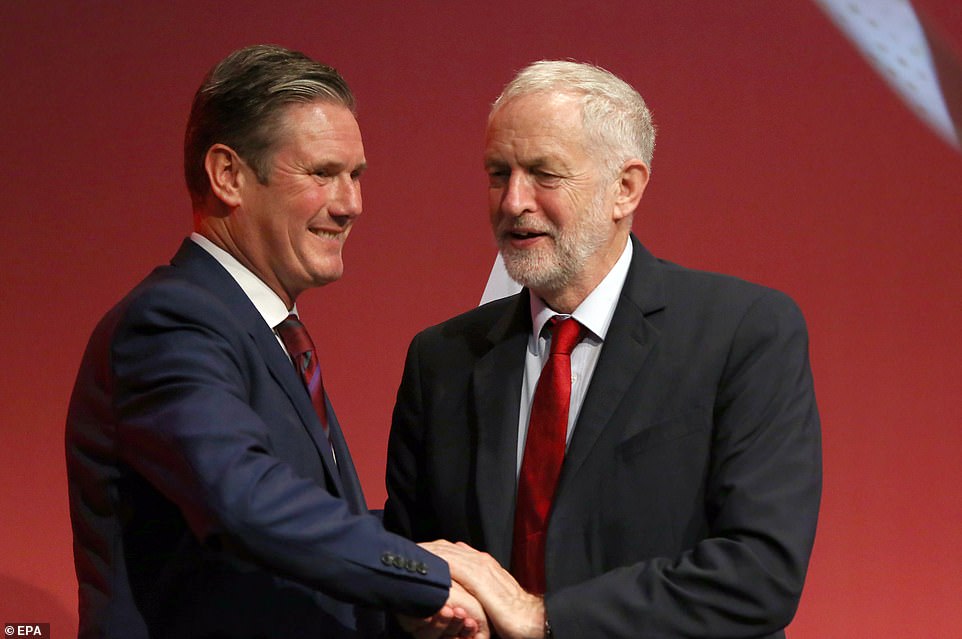 The move by Sir Keir Starmer’s party, which also apologised to the seven, is part of a settlement aimed at drawing a line under allegations made during Jeremy Corbyn’s leadership that the party had allowed the overt hatred of Jewish people to fester. They are pictured together at the Labour Party Conference in Brighton in 2017 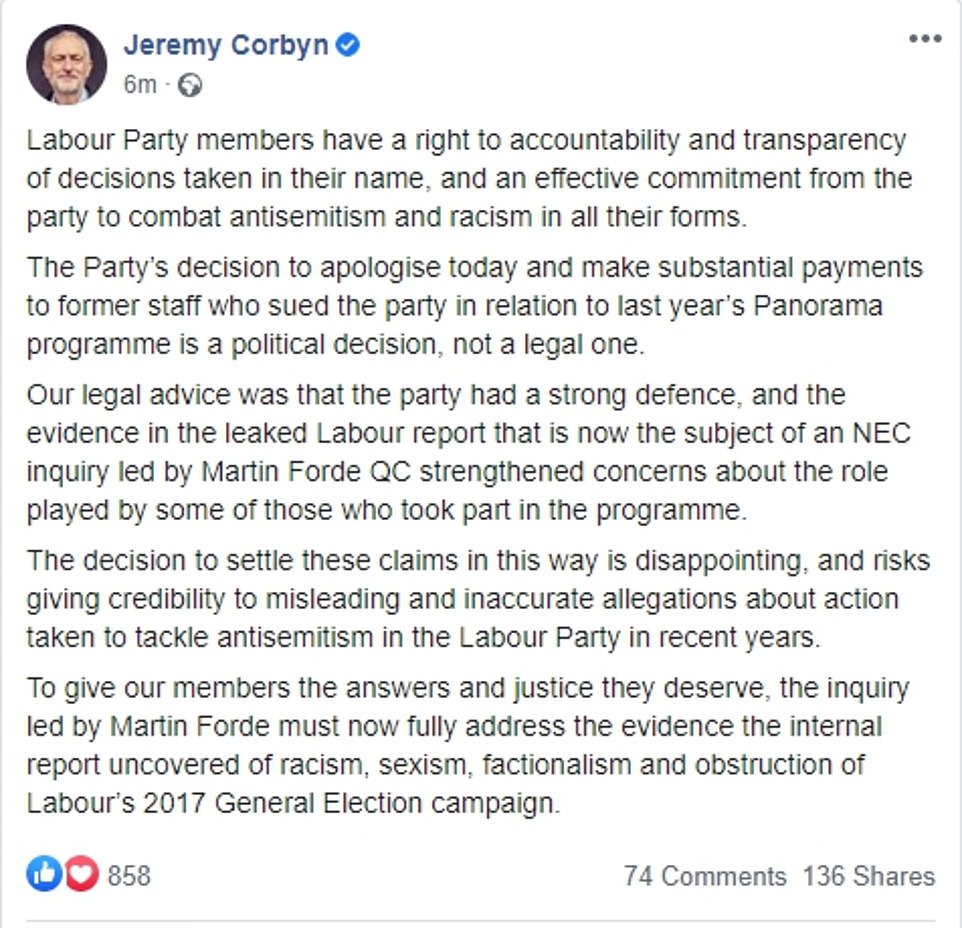 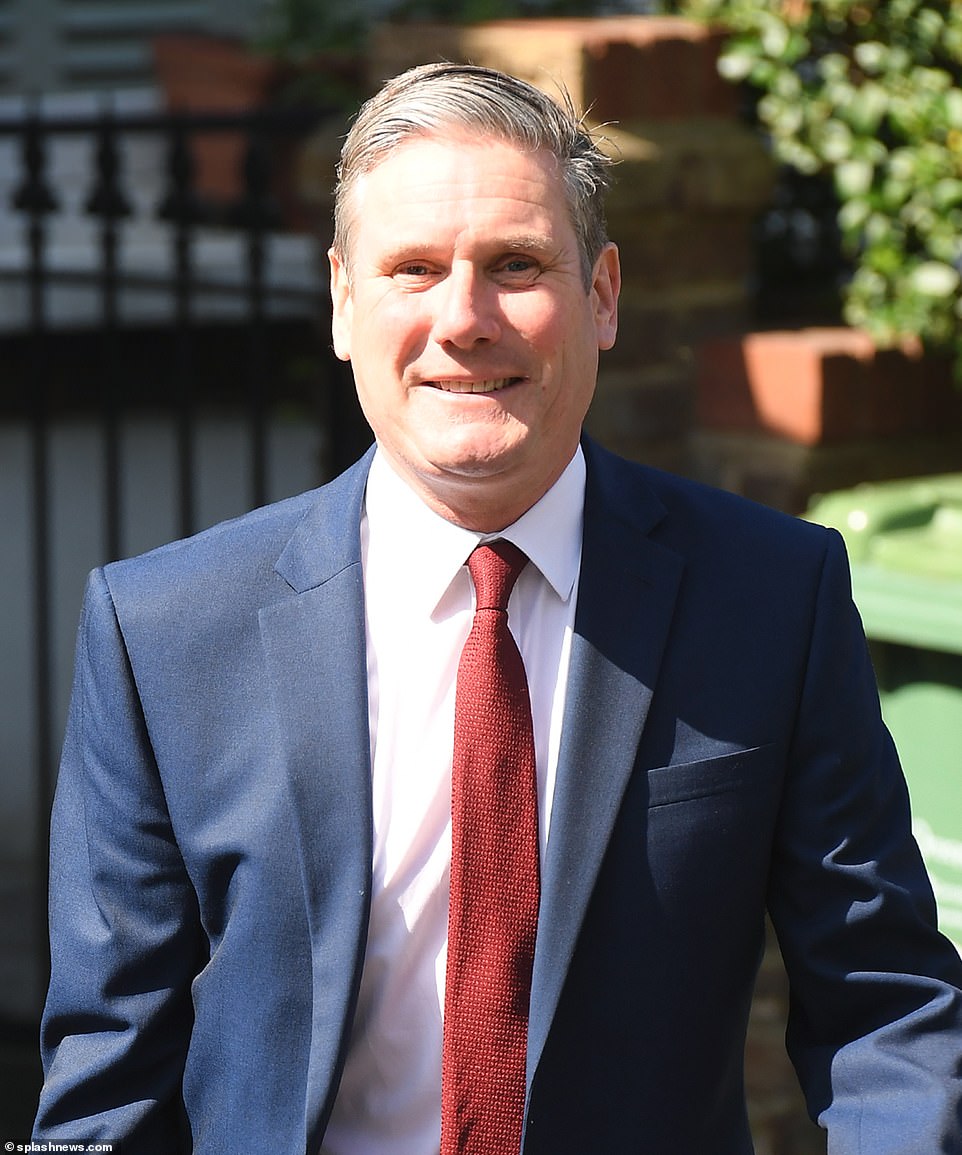 Labour MPs and Jewish activists welcomed the decision to settle the libel claim this morning.

The Jewish Labour Movement, which came close to disaffiliating with Labour under Mr Corbyn, said: ‘It is a sad reflection of its historic role as the party of working people that Labour sought to pursue and silence its former employees for speaking out against racism.

‘Panorama shone a spotlight on the Labour Party’s failure to act and the growing culture of denial that sought to victimise those who had faced discrimination.’

The group said that ‘under new leadership, our hope is that the party will continue to demonstrate this willingness to change and act decisively against anti-Semitism’.

Labour MP Dame Margaret Hodge tweeted: ‘Good! This is a big step in the right

direction and shows just how far the Labour Party has come since last year.’

Jewish former Labour MP Ruth Smeeth tweeted: ‘This has been a long time coming, the whistleblowers were so brave to make a stand & their strength has been inspirational.

‘They have been relentlessly attacked for simply being honest. @UKLabour are absolutely right to apologise for the shameless way they have been treated.’

After losing her seat at last year’s election, Ms Smeeth said Jeremy Corbyn’s handling of anti-Semitism allegations had turned Labour in to the ‘nasty party’.

The investigation, ‘Is Labour Anti-Semitic?’ was screened in July last year and made a number of serious claims about the party’s internal culture for dealing with complaints of anti-Semitism.

In a statement when the programme was broadcast, a Labour spokesman – acting for Mr Corbyn – called the whistleblowers ‘disaffected former officials’ and said they had ‘worked actively to undermine’ the leader and had ‘both personal and political axes to grind’.

Both Mr Corbyn and the Momentum founder, Jon Lansman, also suggested in statements following the programme that it had a pre-determined outcome.

Following those statements, seven of the eight whistleblowers, who are all former Labour staffers, instructed the prominent media lawyer Mark Lewis to take action against the party.

They claimed senior figures had issued statements attacking their reputations and suggesting they had ulterior political and personal motives to undermine the party.

The others were Katherine Buckingham, Martha Robinson and Benjamin Westerman.

Iain McNicol, the party’s former general secretary who was the eighth interviewee on the programme, was not involved in the action.

At a brief hearing in London, William Bennett QC, barrister for the seven whistleblowers, said: ‘The whistleblowers were highly critical of the Labour Party’s approach to tackling anti-Semitism within its ranks.’

He told Mr Justice Nicklin: ‘Before the broadcast of the Panorama programme, the Labour Party issued a press release that contained defamatory and false allegations about the whistleblowers.’

Mr Bennett said Labour ‘accused the whistleblowers of having acted in bad faith during and after their employment with the intention of harming the Labour Party’, allegations he said were ‘untrue and defamatory’.

He added: ‘The Labour Party is here today to set the record straight and to apologise unreservedly to the claimants for the distress and embarrassment that the publication of the false allegations have caused them and for the continuing damage that has been caused to their reputations.

‘The Labour Party also has agreed to pay substantial damages to the whistleblowers.’

Mark Henderson, representing Labour, told the court: ‘The Labour Party acknowledges that these claims about the claimants are untrue, and we retract and withdraw them and undertake not to repeat them.

‘The Labour Party is here today to publicly set the record straight and to apologise to the claimants for the distress and embarrassment that it has caused them.’

At the same hearing, Labour also apologised to John Ware – the journalist who made the Panorama programme – for falsely accusing him of ‘deliberate and malicious misrepresentations designed to mislead the public’.

Mr Bennett said Labour had alleged that Mr Ware ‘invented quotes, flouted journalistic ethics and … knowingly promoted falsehoods’ in pursuit of ‘a pre-determined outcome to the question asked by the Panorama programme’.

He added that the party had agreed to pay ‘substantial damages’ to Mr Ware.

The £500,000 payout that Labour has to make covers damages for Mr Ware and the seven whistleblowers, as well as legal costs.

In a statement, the claimants’ solicitor Mark Lewis said: ‘Today in the High Court, the Labour Party retracted its false allegations made about the Panorama programme asking whether Labour was anti-Semitic.

‘The answer was a clear ”yes”. Labour chose to double down and attack the programme’s presenter, John Ware, and the whistleblowers rather than addressing the truth of the problem.

‘It is ironic that the workers’ party chose to act as disgruntled bosses who had been caught out.’

‘Regrettably, there are too many out there who do not bother to check the facts when the facts do not support their factional view.’

Ofcom rejected 28 complaints against the programme for alleged bias, concluding that it was ‘duly impartial’ and included Labour’s response prominently throughout.

It said: ‘The Labour Party has today issued an unreserved apology to the former members of staff who contributed to a BBC Panorama programme about anti-Semitism within the Labour Party in July 2019.

‘Before the broadcast of the programme, the Labour Party issued a press release that contained defamatory and false allegations about these whistleblowers.

‘We acknowledge the many years of dedicated and committed service that the whistleblowers have given to the Labour Party as members and as staff. We appreciate their valuable contribution at all levels of the Party.

‘We unreservedly withdraw all allegations of bad faith, malice and lying. We would like to apologise unreservedly for the distress, embarrassment and hurt caused by their publication. We have agreed to pay them damages.

‘Under the leadership of Keir Starmer and Angela Rayner, we are committed to tackling anti-Semitism within the Labour Party. Anti-Semitism has been a stain on the Labour Party in recent years. It has caused unacceptable and unimaginable levels of grief and distress for many in the Jewish community, as well as members of staff.

‘If we are to restore the trust of the Jewish community, we must demonstrate a change of leadership. That means being open, transparent and respecting the right of whistleblowers. We are determined to deliver that change.’

A BBC spokesman said today: ‘The BBC will always support fair and impartial reporting, exposing wrongdoing and holding power to account. The Panorama programme did precisely that, but was subject to an extraordinary and vitriolic attack by the Labour Party.

‘We welcome today’s long overdue apology to John Ware and the seven Panorama whistleblowers, who have been subjected to painful and damaging personal attacks on their integrity and character.

‘We applaud their strength to take this case forward and are pleased it has been recognised in court that these extremely serious and damaging allegations against them were false and have been unreservedly withdrawn. ‘John Ware is a reporter with an extraordinary record of excellence at Panorama for investigative journalism in the public interest.’

Speaking outside court after the hearing, Labour’s shadow attorney general Lord Falconer said: ‘It is a clear line under a dispute between the Labour Party and people who had been whistleblowers about anti-Semitism.

‘The Labour Party made absolutely clear in its statement in open court that it withdrew completely any allegation of dishonesty or bad behaviour against the whistleblowers and the journalist involved.

‘It is for the (Equality and Human Rights) Commission to make its findings public when it chooses … but we have brought to an end a chapter when the Labour Party was accusing whistleblowers of behaving dishonestly and I’m incredibly glad that we have brought it to an end.

‘We can focus now not on litigation, which is a disastrous thing for a party to be focusing on.

‘Instead, it should be focusing on championing the things that matter to the public, so it’s a good day.’

It comes nine days after Labour received a copy of a long-awaited report into whether it victimised Jews during the Corbyn years.

The Equality and Human Rights Commission’s draft conclusions have not yet been made public, but insiders expect them to be ‘damning’.

The watchdog said when it launched its official inquiry last May that it ‘suspected’ that Labour had committed ‘unlawful acts’ in its handling of its anti-Semitism crisis.

There was fury over a passage in Maxine Peake’s offending article where the actress said the US police had learned the tactics that killed George Floyd from the Israel secret services.

Loading...
Newer Post
Pictured: Block of flats where woman was raped for five hours as cops reopen investigation
Older Post
Cheltenham tourism video is slammed over its ‘lack of diversity’