Hillary Clinton has blasted Senator Ted Cruz and his family for leaving behind their poodle Snowflake as they jetted off to the Ritz-Carlson hotel in Cancun, Mexico.

Cruz, his wife and his daughters headed south of the border on Wednesday, but the dog was left alone in the unheated Houston house.

‘Don’t vote for anyone you wouldn’t trust with your drug,’ Clinton tweeted Friday morning.

At the time of publication, the tweet had been liked more than 186,000 times and retweeted more than 23,000 times.

Cruz is not up for reelection as a U.S. Senator until 2024, but Clinton is telling voters to remember this situation when election season rolls around.

Snowflake, which was adopted as a puppy by the family in 2014, was spotted by a reporter at 1pm on Thursday, looking out the front door.

A security guard stationed outside the property said that he had been tasked with feeding and tending to the dog, in the freezing home.

Hillary Clinton blasted Texas Senator Ted Cruz for leaving behind his dog while he and his family fled to Mexico to escape freezing temperatures by tweeting: ‘Don’t vote for anyone you wouldn’t trust with your dog’ 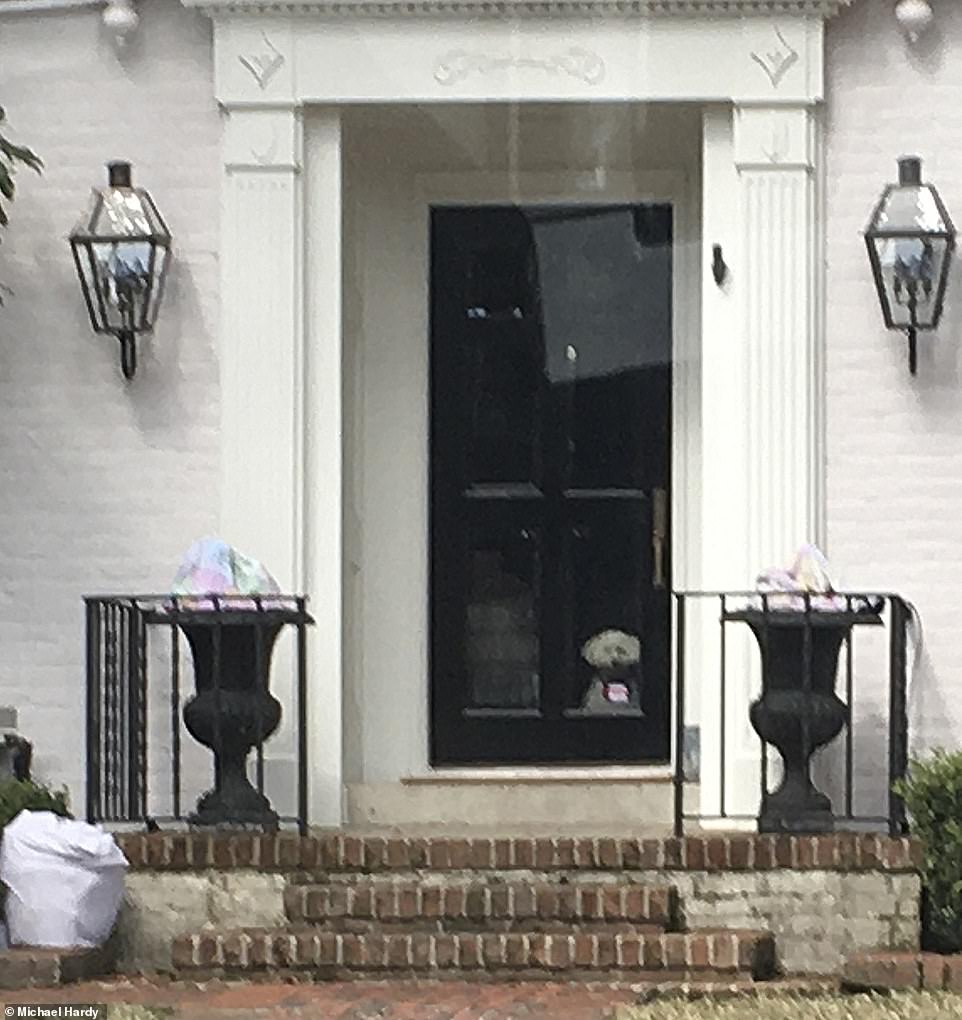 At 1pm on Thursday, when the entire Cruz family was still in sunny Cancun, a reporter, Michael Hardy, spotted Snowflake looking out the door of the family’s Houston home

Cruz said his home lost power at around 6pm on Tuesday night.

‘It got cold, in the 30s in the house,’ he told Sean Hannity’s Fox News show on Thursday night, having returned that afternoon, chastened, following an outcry.

‘It stayed without power for two days.’

Cruz and Heidi, a managing director in Goldman Sachs’ Houston office, flew out of Houston airport at 4pm on Wednesday, with their daughters Caroline and Catherine, 10 and 12.

Their trip was met with a great deal of criticism, as Cruz was lambasted for jetting to a fancy hotel while his constituents went without power, hot water and heat.

Cruz landed back at Houston airport at around 5pm on Thursday. 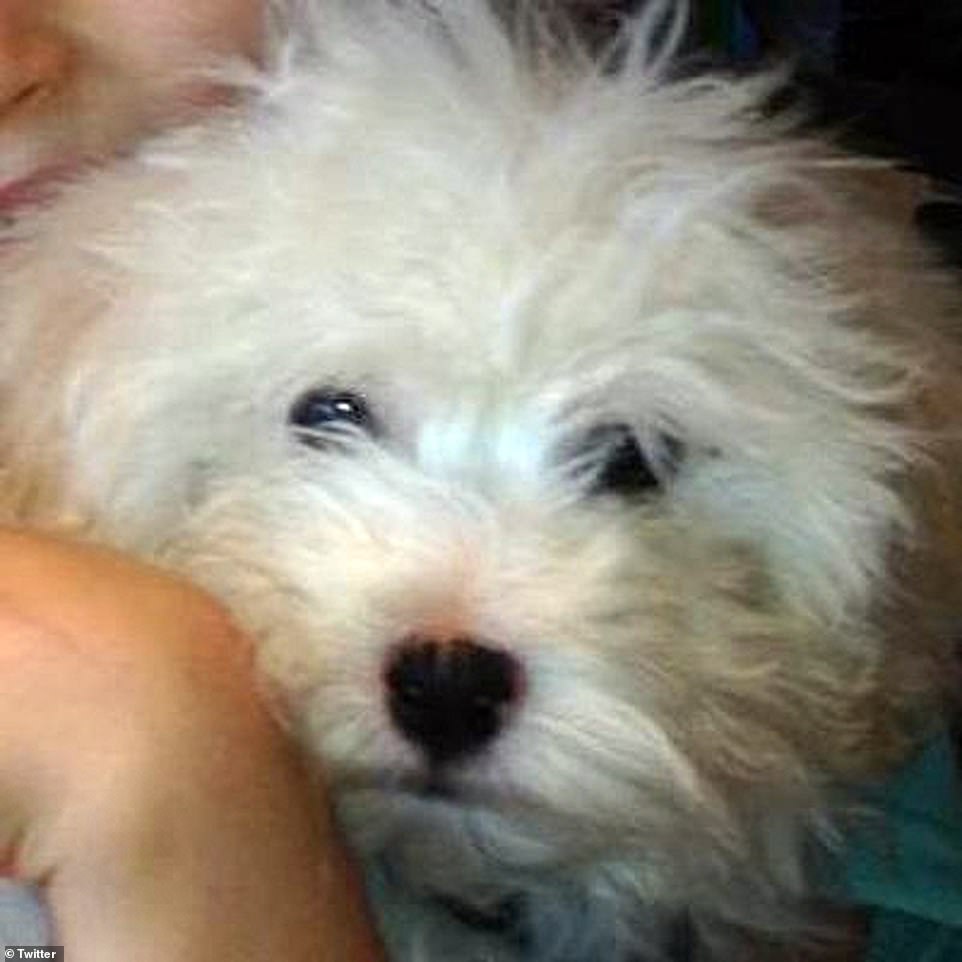 Snowflake, the Cruz’s poodle, was left behind in their freezing home while they went to Mexico 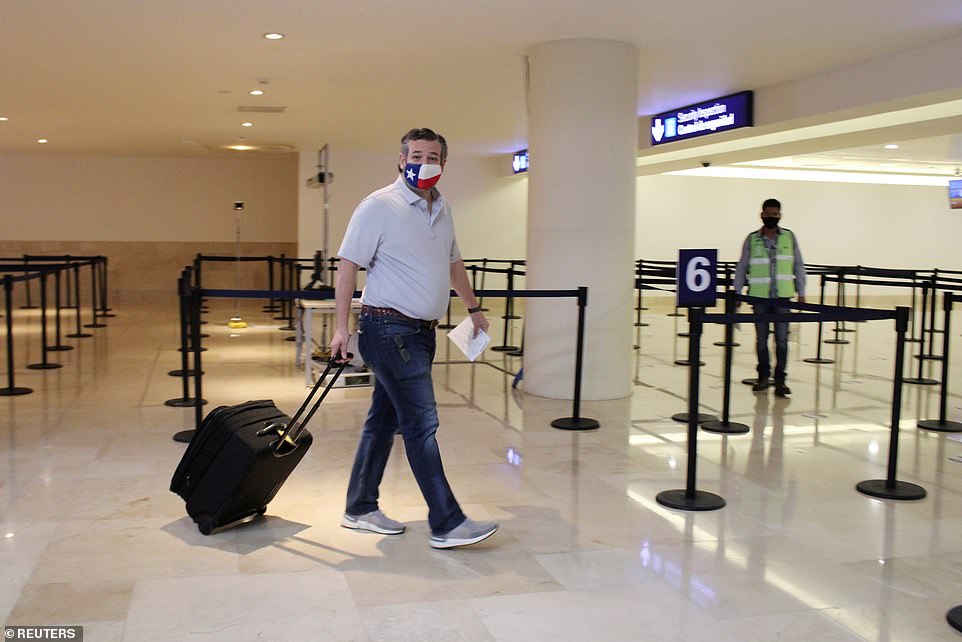 The Texas senator is seen at Cancun airport on Thursday, returning home after 24 hours away

His wife and daughters remained in Mexico, enjoying temperatures in the high 70s at their $300-a-night resort on the beach in Cancun.

Twenty four people have died so far amid the coldest temperatures in decades.

Cruz admitted on Thursday that his trip, which sparked a furious outcry among his freezing constituents, had been a mistake.

‘It was obviously a mistake and in hindsight I wouldn’t have done it,’ he said on arrival back at his Colonial Revival home, in the River Oaks district of Houston.

‘I was trying to be a dad,’ he explained.

‘And all of us have made decisions – when you’ve got two girls who have been cold for two days, and haven’t had heat or power, and they are saying: ‘Look, we don’t have school, why don’t we go, let’s get out of here.”

Cruz later admitted to Hannity that he intended to stay at the beach resort ‘through the weekend’, working to help his freezing people from Cancun. 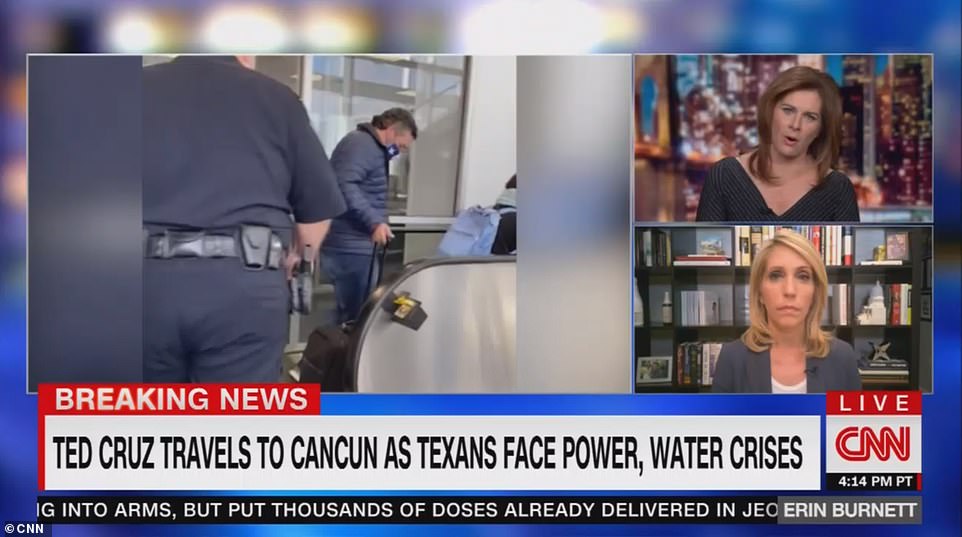 Cruz, in footage obtained by CNN, is seen descending an escalator on arrival at Houston airport, after his Cancun trip 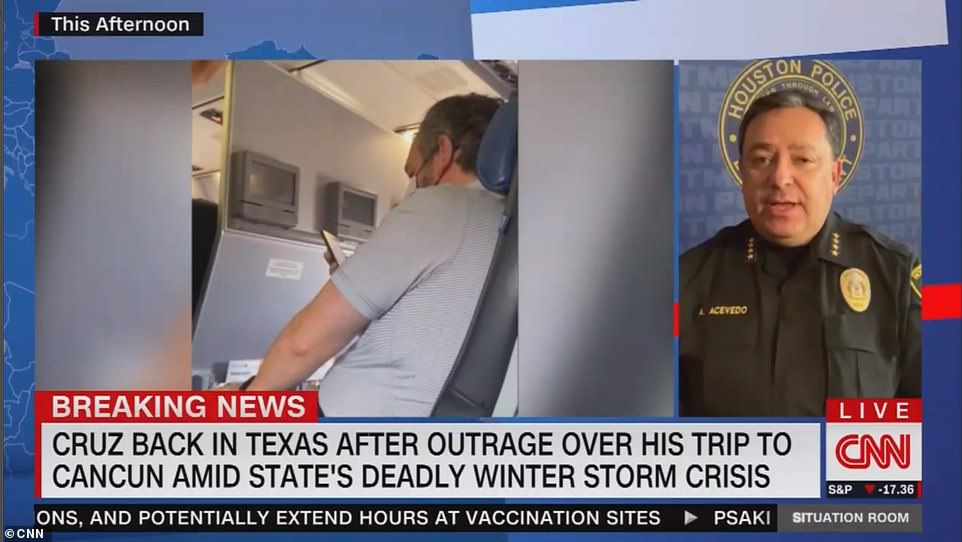 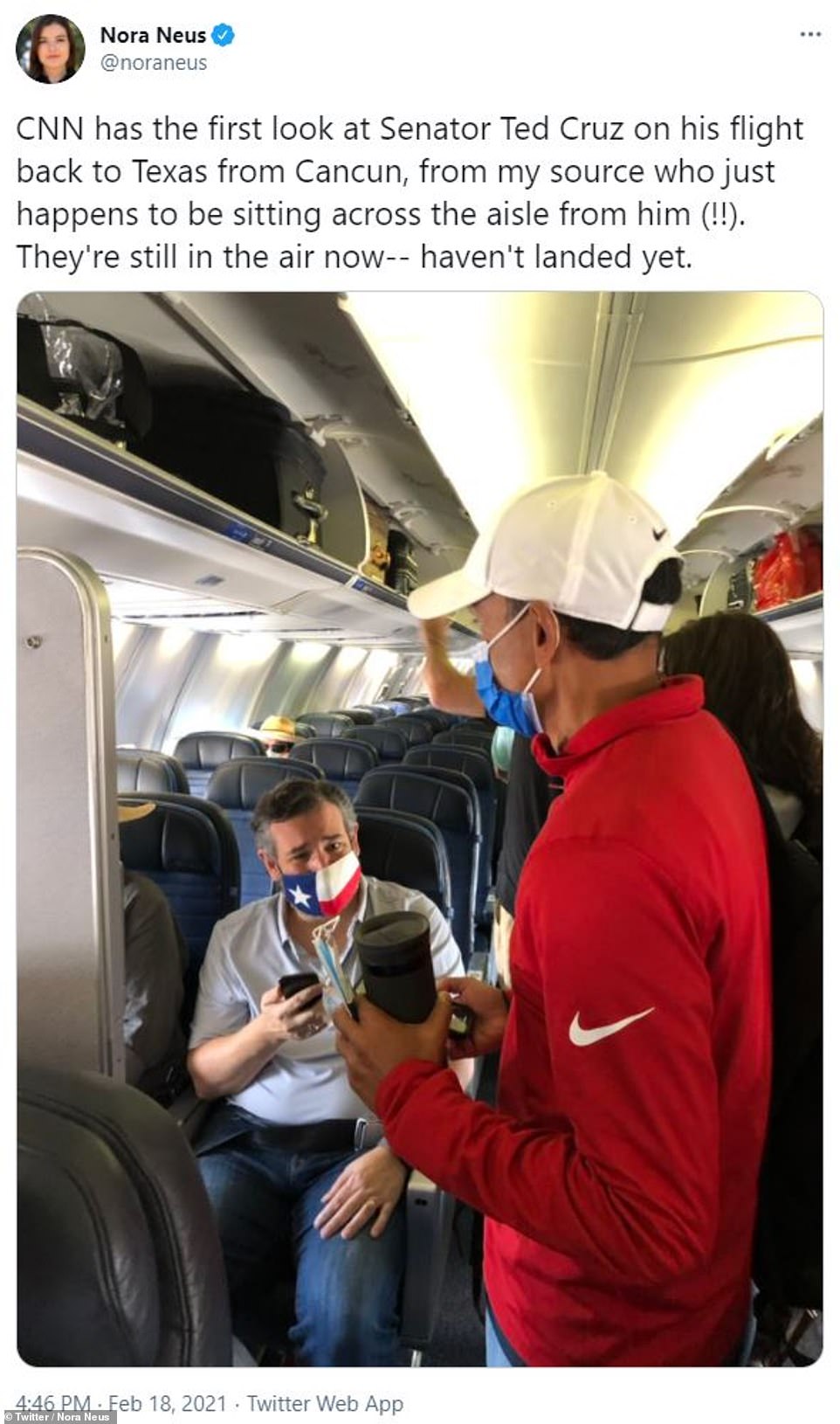 He changed his flight, he said, on realizing it wasn’t a good look.

‘We lost power for two days, we lost power, we had no heat,’ he said.

‘We were huddled around the fireplace behind me because it was the only heat in the house.

‘After a couple of days, with it being really cold, in the teens outside, my girls said school’s been cancelled, can we take a trip and go somewhere warm.

‘And Heidi and I, as parents, we said OK, sure.

‘So last night I flew down with them to the beach. And I flew back this afternoon.

‘I had initially planned to stay through the weekend and work remotely there.

‘As I was heading down I started to have second thoughts almost immediately,’ he said. 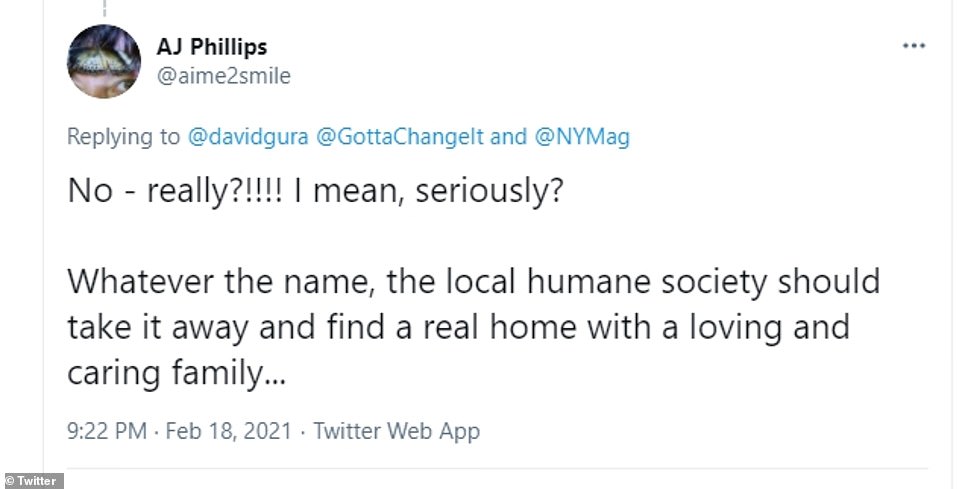 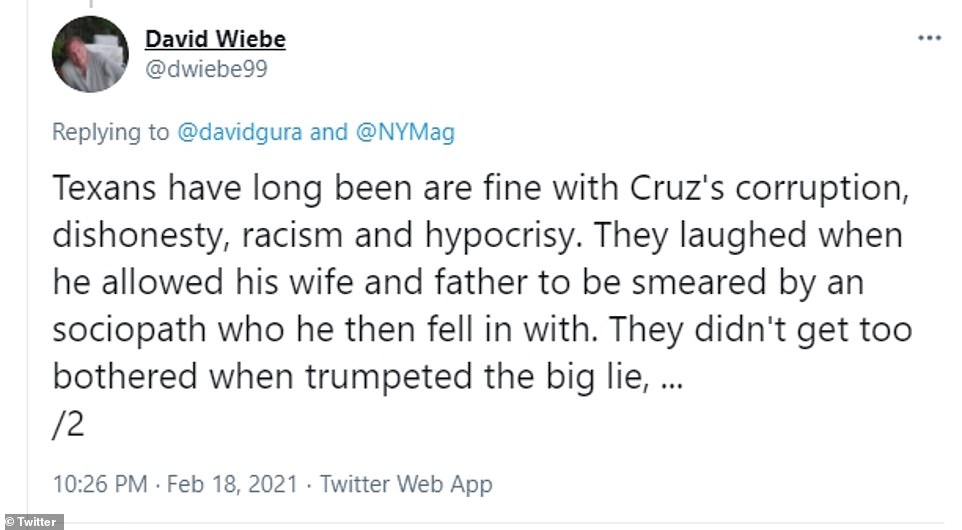 ‘Because the crisis here in Texas you need to be on the ground, because as much as you can do by phone and Zoom, it’s not the same.

‘So I returned this afternoon and I’m here working to do everything we can to get the power turned on.’

The Cruzes’ decision to leave their pet sparked further fury on social media.

Another said: ‘Animal cruelty too?’

Some suggested that animal welfare charities should step in.

‘The local humane society should take it away and find a real home with a loving and caring family,’ said one.

‘I am more focused on him leaving the dog in a freezing house,’ said another. ‘WTF?’

‘Texans have long been fine with Cruz’s corruption, dishonesty and hypocrisy,’ said one, noting that leaving behind their dog was ‘a bridge too far’.