Trump learns fate tomorrow with senators voting after trial turns into an angry shouting match
Astonished mother has a hilarious reaction when she is told she is expecting twin girls
Dentist waiting room saved one Sydney woman who invested $2.5million with missing Melissa Caddick

Second gentleman Doug Emhoff admitted Monday that ‘teaching is really hard’ as he adjusts to his new dual roles of Georgetown law professor and husband to Vice President Kamala Harris.

Emhoff, who exchanged his partnership at the DLA Piper law firm for a professorship after his wife was elected with President Joe Biden, said the coronavirus pandemic is complicating classroom matters.

‘First of all, I’ve learned teaching is really hard,’ he said at an event at Hook Hall in Washington D.C. with Mayor Muriel Bowser.

‘The amount of work that you have to put in and the extra effort, especially during COVID, doing over Zoom,’ he noted.

First lady Jill Biden also still teaches at the Northern Virginia Community College she joined when her husband was vice president. She recently said her students miss being in the classroom as she teaches them via zoom. President Biden is pushing for schools to reopen. 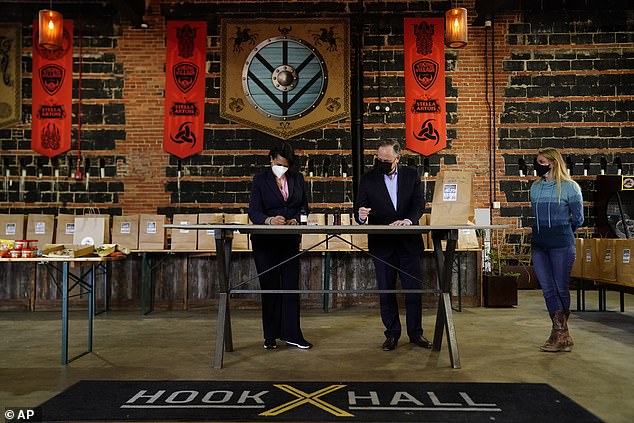 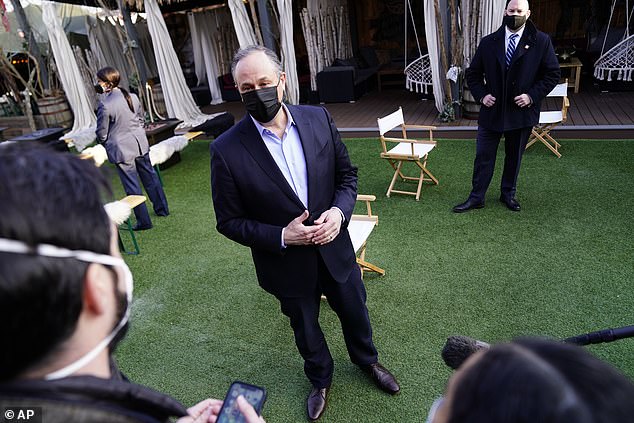 On Monday afternoon, Emhoff and Bowser toured the beer hall to highlight its COVID-relief work, which includes distributing meals and care kits to local hospitality workers.

The Hook Hall Helps project began on March 16, 2020, when DC restaurants were closed due to the COVID-19 pandemic. The program offers meals and supplies to furloughed and out-of-work hospitality industry workers – restaurants, hotels, caterers, and bars.

The first-ever second gentleman in American history, Emhoff left his position as a highly-paid litigator specializing in entertainment and intellectual property law. He earned about three million dollars last year, according to his disclosure reports.

He told reporters at the Hook Hall event he is working full time in both his teaching position and educating himself as second gentleman.

‘It’s not just going to the library and the national galleries, it’s also taking advantage of the experts in administration, learning issues, so when I’m out here advocating, I know I’m up on the issues,’ he said.

Emhoff serves as a Distinguished Visitor from Practice at Georgetown and teaches a class on ‘Entertainment Law Disputes,’ drawing heavily on his professional experience.

He noted his students adjusted quickly to their new professor and his historic role, which comes with Secret Service protection and three-car motorcade.

‘Look, it’s odd the second gentleman is their teacher,’ he said. ‘But we kind of dispensed with that. It was maybe five minutes in the first class.’

Still, he conceded, he misses his law practice.

‘I do miss it. I did it for 30 years, I thought I was good at it and successful but what an opportunity, if I’m gonna leave to be able to be in this administration, and also to support my wife,’ he said. ‘I mean, she’s the first female vice president.’

He went to say how proud he is to support Harris in her groundbreaking role as first female vice president.

Emhoff won accolades for his support of his wife during her own presidential bid and then when she joined the Biden ticket. As spouse of the vice president, he’s been on hand when his wife swears in Cabinet officials and he’s visited local businesses with her to see how they are being affected by the pandemic.

He made his first solo appearance as second gentleman in January, when he visited a community farm at a Washington D.C. middle school. 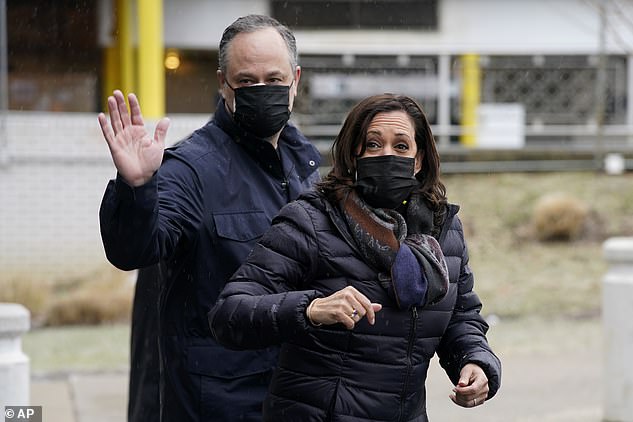 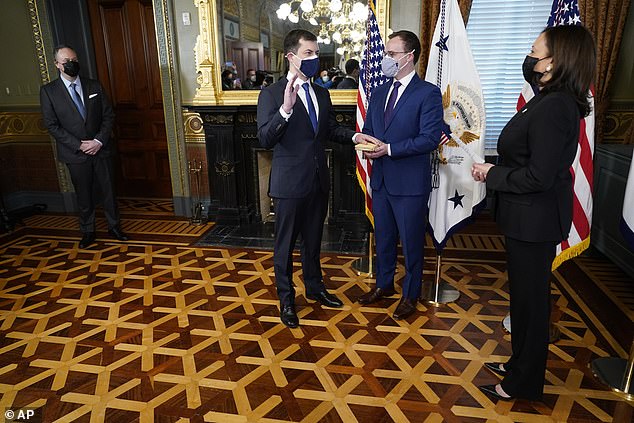 In addition to his teaching work, Doug Emhoff has joined Vice President Kamala Harris at official events, such as when she swore in Pete Buttigieg as Transportation Secretary as his husband Chasten Buttigieg holds the bible

Emhoff has expressed interest in food insecurity as an issue – it’s traditional for the spouse of the vice president to take up a cause – but has made no formal announcement of any initiatives.

One in nine Americans struggles with food insecurity, according to Feeding America, and long lines have formed at community food banks during the pandemic.

Emhoff signed two of the bags, writing ‘stay strong’ on one and ‘we will get through this’ on the other.