The cost of a basic funeral has risen to £4,184 on average, but more families opted for budget cremations during the pandemic and their price has drop

The cost of a basic funeral has risen to £4,184 on average, but more families opted for budget cremations during the pandemic and their price has dropped to £1,554.

A ‘direct cremation’ takes place without a funeral service, and ashes are returned to a family afterwards, allowing them to organise a personal memorial for a loved one at a time of their choosing.

These no-frills send-offs made up 14 per cent of all funerals in 2020, up from 3 per cent the year before.

But during the early stage of the Covid-19 crisis last spring and in early summer, a quarter of funerals were carried out this way, according to an annual report on the cost of dying by insurer SunLife. 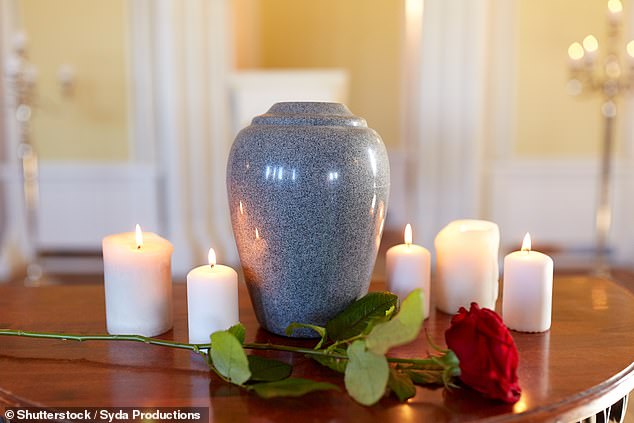 Death of a loved one: The cost of a basic funeral has risen to £4,184 on average

The overall average cost of a basic funeral rose 1.7 per cent last year, which was the slowest annual rise since 2004, the firm found.

A basic funeral covers fees for the cremation or burial, a funeral director, doctor, and minister or celebrant.

But other extras pushed the total cost of dealing with a death to £9,263 on average last year.

These include a memorial, death and funeral notices, flowers, order sheets, limousines, the venue and catering for a wake, which totted up to £2,532 on average last year, representing a 9.8 per cent jump in price.

Another cost can be professional fees, such as hiring a lawyer to administer an estate, but these fell 8.1 per cent to £2,547 last year, according to SunLife’s report.

The firm found 24 per cent of people who arranged a funeral between February and July 2020 said the death of their loved one was related to Covid-19.

Among families who organised a funeral during this early phase of the pandemic, 86 per cent said there were things they couldn’t do, or had to cut back on, mostly to do with the wake, 71 per cent said not everyone who wanted to attend could do so, and 15 per cent had to change their plans.

In 2020, 35 per cent of people didn’t leave any money behind to pay for their funeral, and of those that did 34 per cent didn’t leave enough.

SunLife found families had to find an average of £1,789 to cover the cost, which caused 14 per cent financial difficulty overall, but this rose to 34 per cent among those organising a funeral for someone who died of Covid-19.

Of those who struggled to pay the bills, 25 per cent used a credit card to make up the difference, 25 per cent borrowed from a friend or relative, 17 per cent sold belongings, 13 per cent took out a loan and 9 per cent applied for a subsidy from the Government.

Sunlife says the cost of a basic funeral remains highest in London, where the price rose 3.4 per cent to £5,235 on average last year.

But there was a 7.4 per cent drop in price to £3,222 in Northern Ireland, the cheapest place to hold a funeral in the UK, and the cost also fell in Yorkshire, the south west and the north east.

To compile its report, SunLife surveyed 100 funeral directors – 10 per region across the UK – and 1,506 individuals who have been involved in organising a funeral over the past four years.

However, it adjusted how it calculates the average cost of a funeral this year to take into account that there are more cremations than burials than when it first started tracking funeral costs in 2004.

To give a consistent comparison over time, it also updated previous years’ figures to reflect this change. 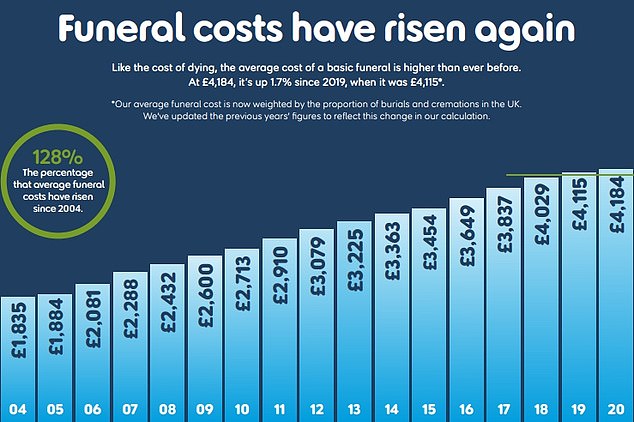 Cost of dying: SunLife surveyed 100 funeral directors, 10 per region across the UK, and 1,506 individuals

Justin Cole, director at SunLife, says: ‘It is clear from our report that the pandemic may have triggered a fundamental shift within people’s attitudes and indeed the funeral industry.

‘Most notably, the option of a direct cremation is becoming far more widely understood and accepted.

‘With many families unable to organise a more traditional funeral due to government restrictions they have chosen a direct cremation and potentially saved thousands of pounds.

‘As a result of more families asking for direct cremations, over 90 per cent of funeral directors now offer them.’

Cole says that if more people spoke about their wishes for a funeral with loved ones, it is likely the number of direct cremations would rise and the overall cost of funerals would fall.

‘One in ten of us feel pressured into spending more than we want to on a loved ones’ funeral for fear of being seen as cheap, but the reality is that most of us would be happy with a direct cremation or want our loved ones to spend ‘as little money as possible.’

THIS IS MONEY PODCAST