Coronavirus US: Economy shrank one third in biggest slump ever

The U.S. economy shrank at a dizzying 33% annual rate in the April-June quarter - by far the worst quarterly plunge ever - as coronavirus shut down bu

The U.S. economy shrank at a dizzying 33% annual rate in the April-June quarter – by far the worst quarterly plunge ever – as coronavirus shut down businesses, throwing tens of millions out of work and sending unemployment surging to 14.7%, the government said Thursday.

The Commerce Department’s estimate of the second-quarter decline in the gross domestic product, the total output of goods and services, marked the sharpest such drop on records dating to 1947.

The previous worst quarterly contraction, a 10% drop, occurred in 1958 during the Eisenhower administration.

Last quarter’s drop followed a 5% fall in the January-March quarter, during which the economy officially entered a recession triggered by the virus, ending an 11-year economic expansion, the longest on record in the United States.

The figures are potentially devastating to Donald Trump’s re-election – and came from the three months which included his re-opening push and claiming the U.S. was entering a ‘transition to greatness.’

But Trump did not react to the figures – instead 16 minutes after their release he suggested delaying the November election because of his claims that mail-in voting will make it ‘inaccurate and fraudulent.’ He has no legal power to do so; Congress sets the date of elections and if he does not win a second term, his departure from office on January 20 is legally mandated.

In a second blow, weekly jobless statistics shows showed 1.4 million new unemployment claims – the second week in a row they have gone up.

Stock markets opened down with the Dow Jones falling more than 300 points – although analysts said investors were more spooked by Trump’s election delay proposal than by the economic growth figures, which were in line with expectations. By 10am it had lost 500 points.

Markets have largely been bolstered by the Federal Reserve vowing to keep interest rates near zero and injecting huge amounts of cash to keep the biggest companies, especially banks, afloat. 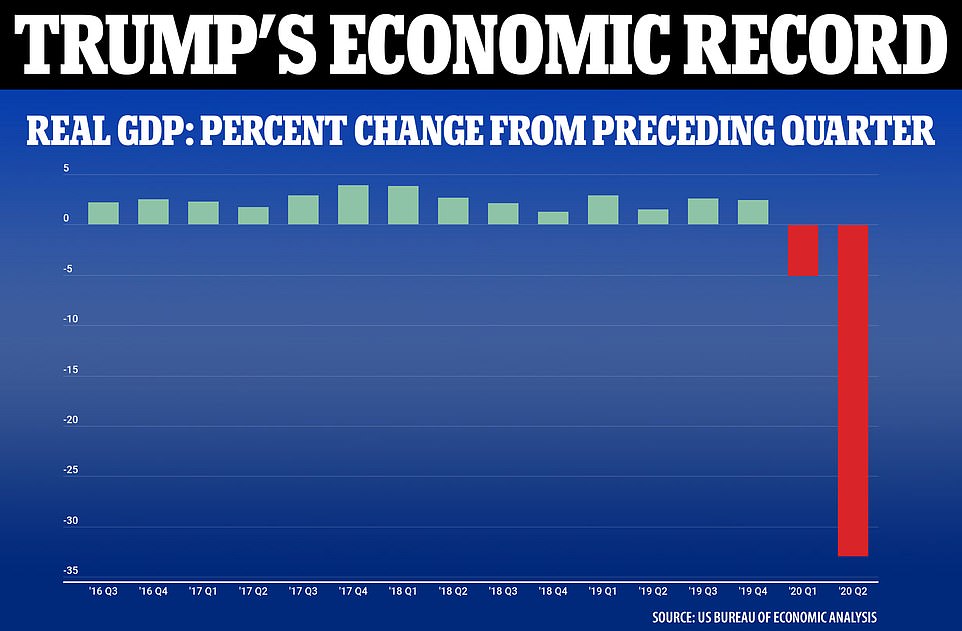 How Trump reacted: 16 minutes after the devastating figures were released, Donald Trump suggested delaying the election 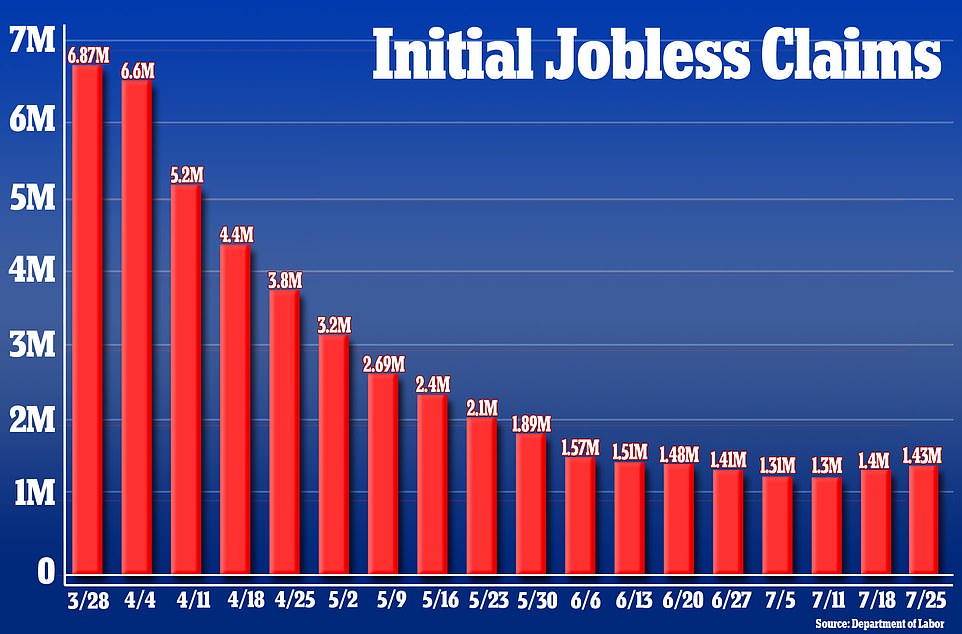 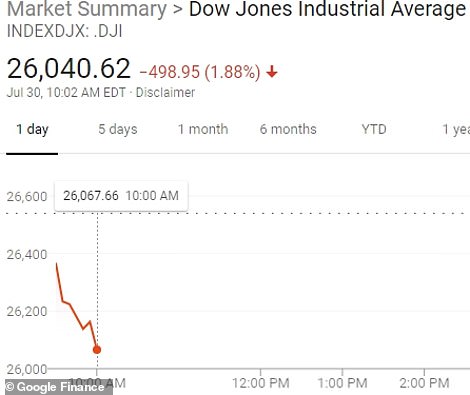 Market reaction: How Dow went down over Trump tweet

The Labor Department’s report Thursday marked the 19th straight week that more than 1 million people have applied for unemployment benefits.

Before the coronavirus hit hard in March, the number of Americans seeking unemployment checks had never exceeded 700,000 in any one week, even during the Great Recession.

All told, 17 million people are collecting traditional jobless benefits, a sign that unemployment checks are keeping many American families afloat financially at a time of big job losses and agonizing economic uncertainty.

The pain could soon intensify: a supplemental $600 in weekly federal unemployment benefits is expiring, and Congress is squabbling about extending the aid, which would probably be done at a reduced level.

The contraction last quarter was driven by a deep pullback in consumer spending, which accounts for about 70% of economic activity.

Spending by consumers collapsed at a 34% annual rate as travel all but froze and shutdown orders forced many restaurants, bars, entertainment venues and other retail establishments to close.

That followed a 6.9% pace of decline in the January-March period. Major retailers including JC Penney and Neiman Marcus have filed for bankruptcy.

State and local government spending, diminished by a loss of tax revenue that forced layoffs, also fell at an annual rate of 5.6%.

But overall government spending was up 2.7%, powered by a 17.4% surge in federal spending, reflecting the more than $2 trillion in relief packages that Congress enacted to provide $1,200 payments to individuals, aid to small businesses and supplemental unemployment benefits.

The job market, the most important pillar of the economy, has been severely damaged. So far, about one-third of the lost jobs have been recovered, but the resurgent virus will likely slow further gains in the job market. 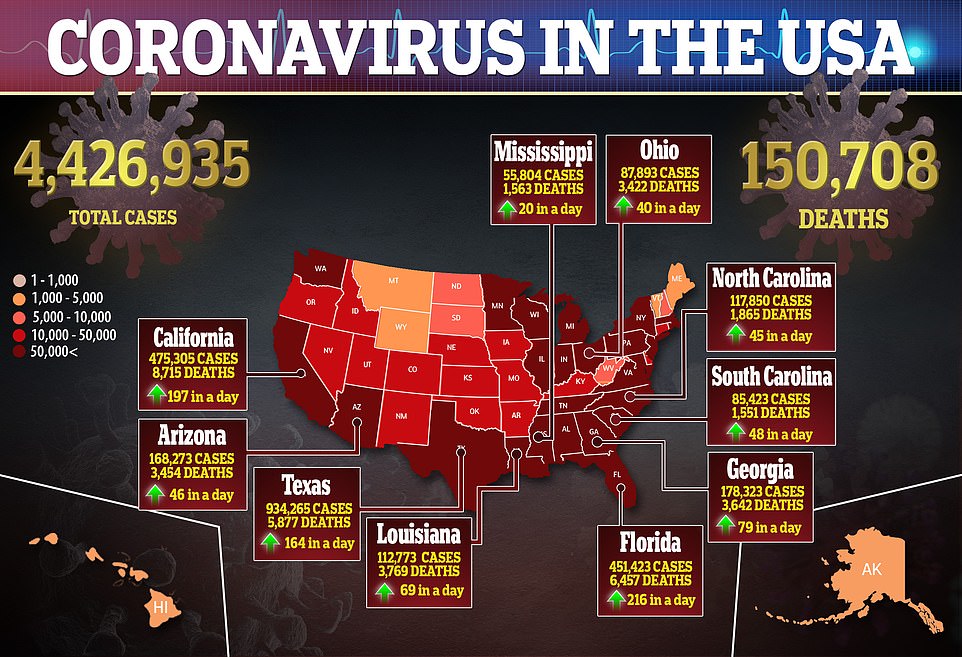 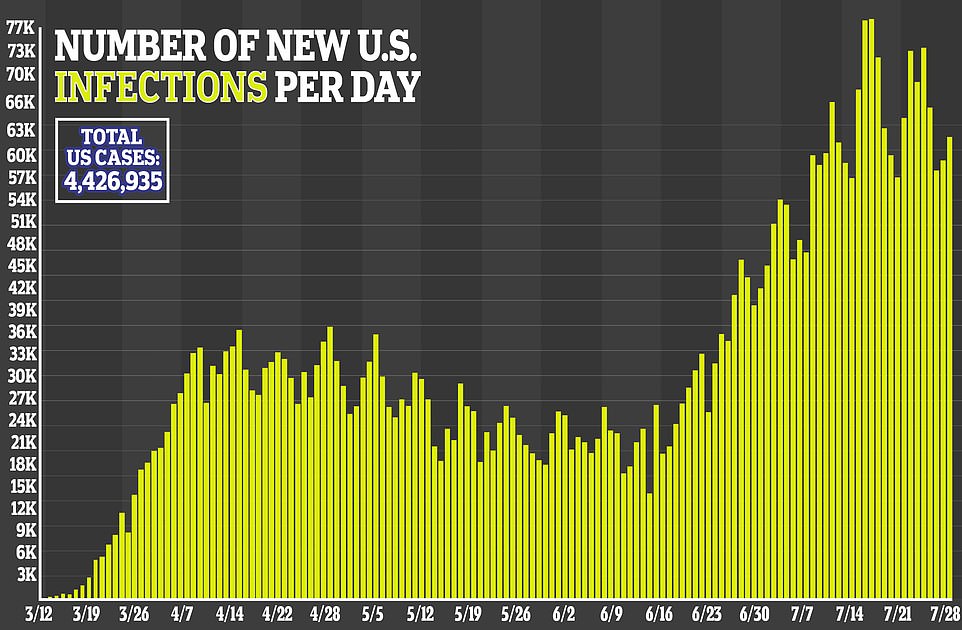 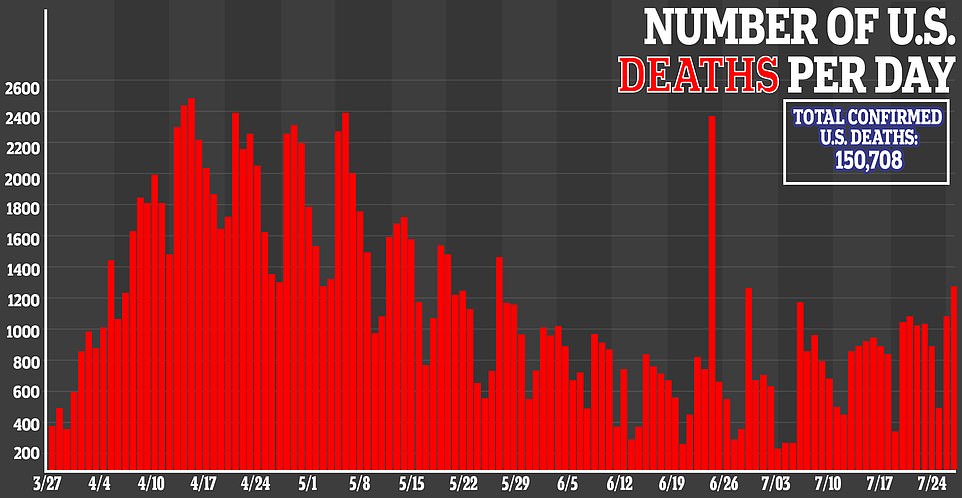 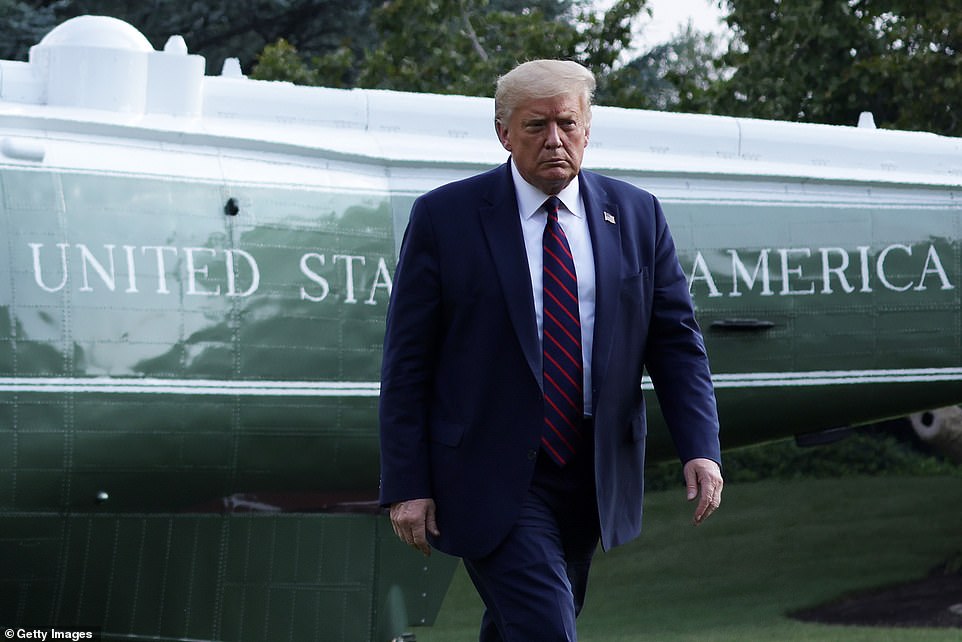 Trump slump: Donald Trump’s economy collapsed by 32.9% – a record figure – in April, May and June of this year as coronavirus chaos spread 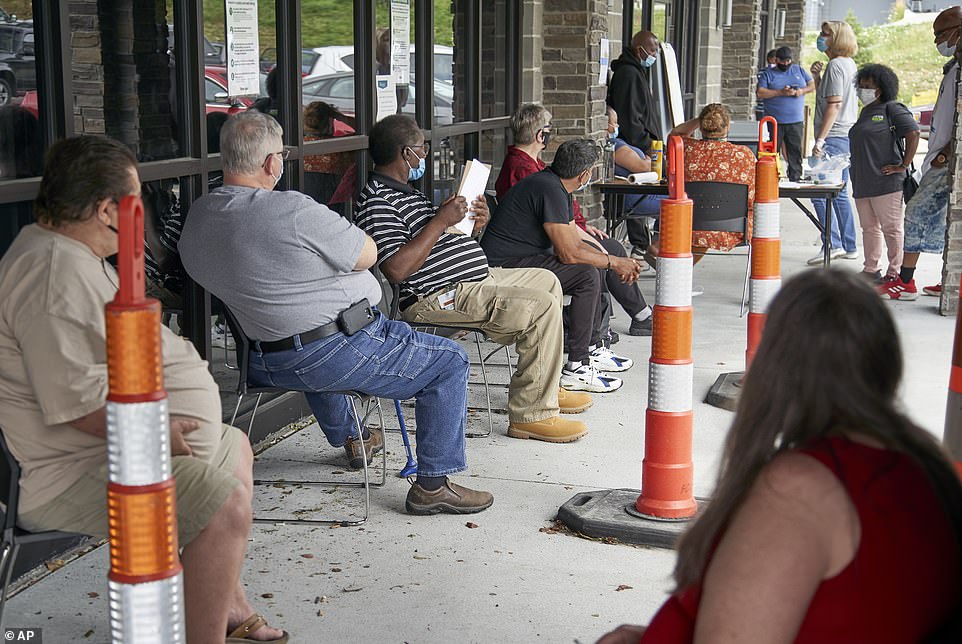 Jobless toll: Millions have been thrown out of work in the chaos caused by the virus – including these job seekers in Omaha, Nebraska

So dizzying was the contraction last quarter that most analysts expect the economy to manage a sharp bounce-back in the current July-September quarter, perhaps of as much as 17% or higher on an annual basis.

Yet with the rate of confirmed coronavirus cases now rising in a majority of states, more businesses being forced to pull back on re-openings and the Republican Senate proposing to scale back the government’s aid to the unemployed, the economy could worsen in the months ahead.

The Trump administration is betting against that outcome in asserting that the economy will undergo a V-shaped recovery in which last quarter’s plunge would be followed by an impressive rebound in the current quarter — a hoped-for dose of good news that would be reported in late October, not long before Election Day.

Yet many economists are talking about a different letter of the alphabet. Noting that the economy can’t fully recover until the pandemic is defeated or a vaccine is widely available, they envision a W-shaped scenario, in which a rebound in the current quarter would be followed by a sustained period of tepid growth or even outright recession.

‘The markdowns are coming because of the clear economic damage the virus is doing,’ said Mark Zandi, chief economist at Moody’s Analytics, who said he believes the economy is losing jobs this month after two months of gains.

‘We are going in reverse here,’ Zandi said.

Analysts warn that the outlook could darken still further if Congress fails to enact enough financial aid to replace the expiring $600-a-week federal boost in unemployment benefits or provide sufficient help for businesses and state and local governments.

Senate Republicans released a $1 trillion proposal on Monday that falls far short of a $3 trillion measure the House has passed, leaving an enormous gap for Democrats and Republicans to bridge as some elements of Congress’ earlier emergency relief programs run out. 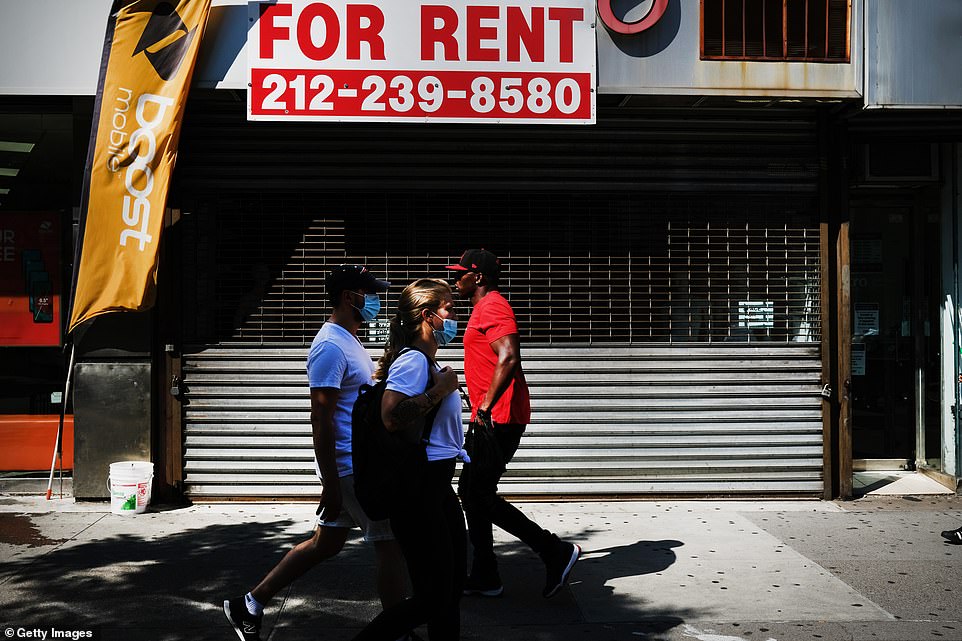 Recent reports sketch a cautionary picture of the economy, with weekly applications for unemployment benefits still topping 1 million and consumer confidence falling sharply, with big declines in Michigan, Florida, Texas and California, all of which suffered a resurgence in confirmed virus cases.

Yet in a more hopeful sign, sales of new and previously owned homes have been rising after sharp declines in the spring, thanks to ultra-low mortgage rates.

And it was reported Wednesday that the number of Americans signing contracts to buy homes jumped 16.6% in June after a record 44% gain in May.

Economists regard increased government aid as essentially a stop-gap action to keep the recession from deepening further.

The most critical need, they agree, is to control the virus, most likely through a vaccine that most likely won’t be widely available until next year.

‘At the moment we are seeing rollbacks and a slowing in activity’ because of the upsurge in virus cases.

Sohn noted that the economy needed 6½ years to regain the ground it had lost in the 2007-2009 Great Recession. This time, he said, the recovery will likely take even longer.