The gap between people's first and second doses of coronavirus vaccines could be stretched beyond the 12-week target, health chiefs said today.When th

The gap between people’s first and second doses of coronavirus vaccines could be stretched beyond the 12-week target, health chiefs said today.

When the Pfizer Covid jab was approved it was on the condition that people would get a second dose three weeks after their first one, as was done in clinical trials.

But the Government, under the pressure of an immense second wave of infections, decided to string this out to three months so it could get first doses to twice as many people before bigger deliveries of the jabs arrive in spring.

Now, however, people could face even longer and potentially open-ended gaps between the two doses.

The Joint Committee on Vaccination and Immunisation has given approval for the second jab to be given any time after 21 days after the first one, with no outer limit.

And Public Health England’s head of immunisation, Dr Mary Ramsey, today said: ‘It may well be that we can afford to be more relaxed.’

Speaking in a meeting with MPs on Parliament’s Science and Technology Committee, Dr Ramsay said it was possible that the priority in the spring could be getting jabs to younger people instead of giving the elderly a second dose.

It comes as England’s deputy chief medical officer, Professor Jonathan Van-Tam, said today that the country is in a ‘constrained supply situation’ but reassured the public second doses hadn’t been cancelled.

The JCVI’s Dr Wei Shen Lim said the Pfizer vaccine appeared to be good enough after one dose that that could eventually become the norm, but it wasn’t yet the official advice. 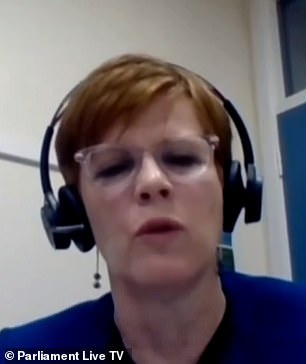 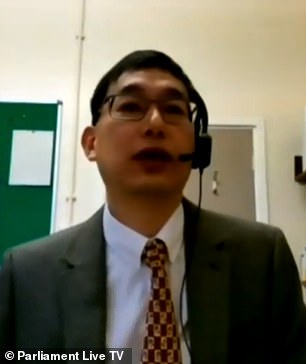 Dr Mary Ramsay, from Public Health England (left), and the JCVI’s Dr Wei Shen Lim (right), today said it was possible that people’s second Covid vaccine doses would be extended beyond the 12 week limit outlined by the Government 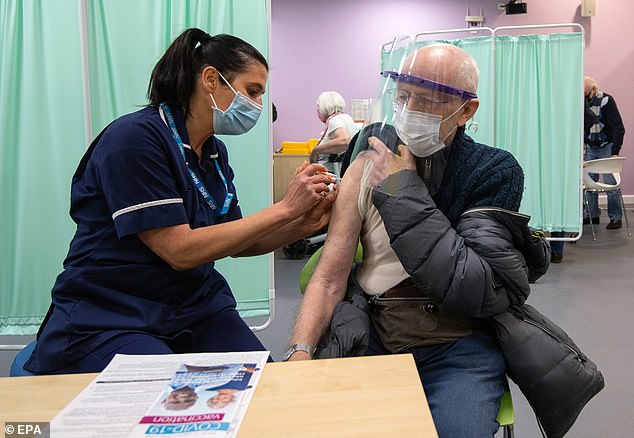 Vaccines are now being offered to people one dose at a time to overcome a slow start to supplies, and second doses will be given out from the spring when there are more jabs available and the outbreak has calmed down (Pictured: A man gets vaccinated in Stevenage, Hertfordshire)

Speaking about second doses Dr Ramsay told the committee: ‘My understanding now is that people are being scheduled at the sort of 12-week mark…

‘The information they are being given now is that you will be vaccinated between three and 12 weeks after the first dose so it doesn’t promise them the vaccine at three to four weeks.’

She added: ‘The current advice from the JCVI is that they go back and do the second dose for the first group so I am expecting that to happen in parallel that we’ll be carrying on rolling out the next groups at the same time and that’s an operational consideration for NHS England…

‘The JCVI is saying at the moment that the second dose should be given no later than 12 weeks.

Dr Ramsay said that, depending on what data shows about levels of protection from a single dose of the vaccine, officials might be able to be ‘more relaxed’ about giving out second jabs.

Asked if this could mean people waiting longer than 12 weeks, Dr Ramsay added: ‘I think that’s unlikely but it’s always possible – as you know in the Covid situation everything has changed when new evidence comes around.’

The choice to extend the second dose period to more than three weeks triggered controversy among scientists and doctors when it was announced because it wasn’t tested in clinical trials.

In Pfizer and BioNTech’s trials, everybody who received the vaccine got their second jab around three weeks after the first, and the results showing how effective it is are all based on this.

Although data showed evidence of protection starting around two weeks after the first dose, with Covid cases in the group slowing to a stop from that point, scientists cannot say how long this one-dose protection would last.

But the JCVI has said it is satisfied there is enough evidence that a high level of immunity would carry on after the first dose.

Dr Wei Shen Lim said the data may even be strong enough to move to a one-dose schedule in the future.

He told MPs this morning: ‘We noted that the vaccine had a very high level of protection after the first dose.

‘And we had also considered whether the first dose provided sufficient protection that one eventually might consider using a single dose.

‘But we also felt that at that time [before Christmas] there were insufficient data to suggest a single-dose regimen.

Dr Lim added: ‘The EMA [European Medicines Agency] approval is that the second dose can be given at a minimum of 21 days, with no upper limit to that regulation.

‘The MHRA then followed and changed their regulatory approval such that the second dose of the Pfizer vaccine is approved to be given from 21 days with no upper limit. So that then allows further flexibility.’

Their comments as deputy medical officer Professor Jonathan Van-Tam said the UK is in a ‘constrained supply situation’.

There is some confusion over whether companies making the vaccines are slowing down the programme by not producing fast enough, or whether the NHS’s network is not working fast enough to deliver the doses it has.

Professor Van-Tam said it was on the manufacturers, who in turn have said they’re slowed by rigorous quality checks before they can be used.

Professor Van-Tam told LBC Radio today: ‘I do understand the concerns that people are raising about this, but I want to make it clear that the second dose is not cancelled, it is deferred.

‘But, moving from the outside in, we are in a constrained supply situation.’