CNN's Brianna Keilar has broken down in tears while reporting on America's COVID-19 death toll. The 40-year-old broadcaster - who hosts the netwo

Hope Hicks is officially OUT as Donald Trump is impeached for second time
Coach driver, 27, who smashed into central reservation because he was DANCING is banned from road
‘Seal them in turn on gas’: Three Oath Keepers arrested and charged with Capitol riot plot

CNN‘s Brianna Keilar has broken down in tears while reporting on America’s COVID-19 death toll.

The 40-year-old broadcaster – who hosts the network’s Newsroom program – couldn’t contain her emotions during a broadcast Monday afternoon as the country inched towards a staggering 500,000 deaths from the disease.

‘We need to remember the people we have lost,’ Keilar mournfully stated before playing a four-minute montage featuring families whose loved ones have died during the pandemic.

The TV host struggled to hold her composure after the package was played, and her voice started to quiver.

‘Even as a nation where many have become numb to this astronomical loss, I know that these stories of our fellow Americans puncture the armor that is natural to have accumulated over the past year,’ she sobbed. 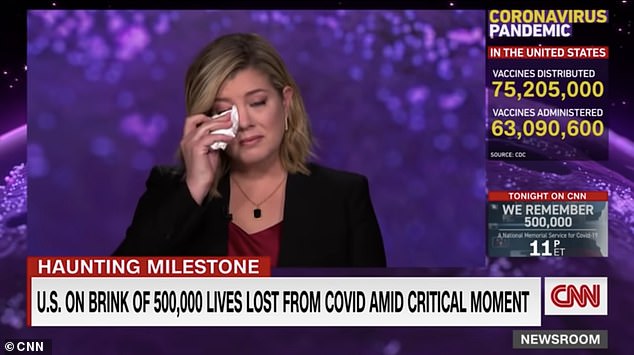 Keilar was seen dabbing her eyes with a tissue before she directly addressed her viewers, saying she was aware that everyone has been suffering since the virus reached US shores last February.

‘The quarantining, the hoping that this would subside only to realize that it wouldn’t any time soon, the struggling to make ends meet, the worrying that if this is the day you might spike a fever or start to cough, the juggling your job while you’re homeschooling your kids, being afraid to see your grandparents, being afraid to see your grandkids, knowing that there is a vaccine that you and your loved ones can’t yet get, struggling with mental health,’ Keilar continued.

The anchor completed her emotional segment by telling viewers that they are not alone in their grief.

‘This is a collective loss. We’re taking this moment to acknowledge that. You are not alone,’ she implored.

‘And if you are lucky enough to still have a little fuel in your tank today, it is a good day to remind someone in your life that you are there for them.’ 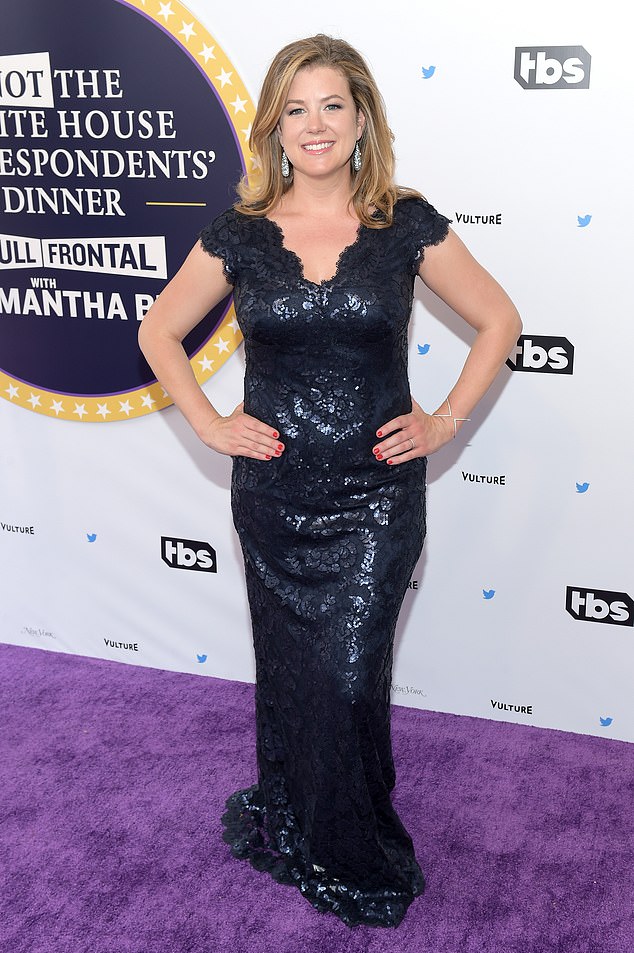 Keilar, who hosts CNN’s Newsroom program, has worked with the network since 2007

President Biden hosted a memorial ceremony at the White House to honor the dead.

‘Today we mark a truly grim heart breaking milestone,’ he said. ‘We often hear people described as ordinary Americans. There’s no such thing. The people we lost were extraordinary,’ he stated as 500 candles were lit on the South Portico of the White House.

‘You’re going to be okay,’ he said, speaking directly to those who have lost someone to COVID.

Biden reminded Americans that the virus can affect anyone. ‘It’s not Democrats and Republicans who are dying from the virus,’ he said.

‘It’s our fellow Americans. It’s our neighbors, our friends, our mothers our fathers our sons our daughters, husbands, wives, we have to fight this together as one people as the United States of America,’ he stated.

No other county has had so many deaths from the virus: the U.S. accounts for 20 percent of the nearly 2.5 million coronavirus deaths globally.

But the daily number of deaths and hospitalizations from the coronavirus are dropping fast, and on Monday fell to their lowest levels since before the Thanksgiving and Christmas holidays.

There were 1,235 daily deaths recorded in the last 24 hours with figures now at their lowest since the middle of October. 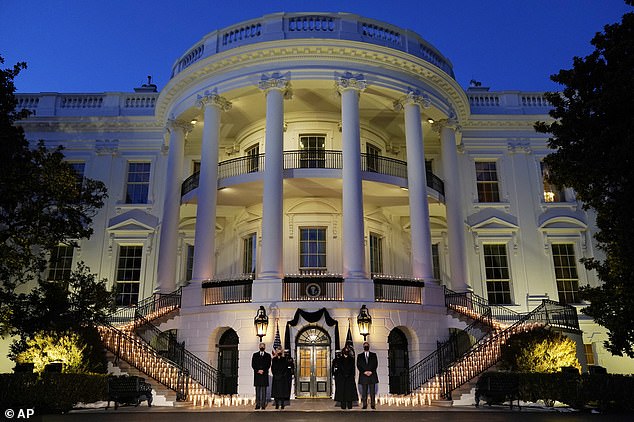 Lit in memory: The South Portico was illuminated by candles for the ceremony of remembrance, and federal flags were lowered to half staff for five days of mourning 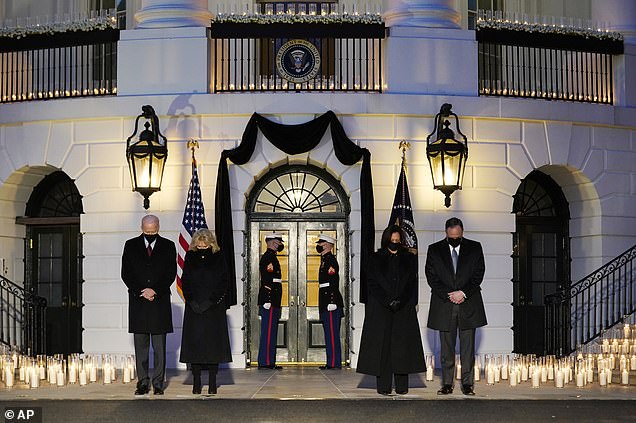 Memory: At sundown, Joe and Jill Biden and Kamala Harris and Doug Emhoff prayed on the South Portico of the White House for the more than 500,000 Americans who have died from COVID