‘Knifeman’, 30, will appear after NHS caterer, 56, was stabbed on hospital ward
Covid infections drop by a fifth from last week to 15,871
Brexit: George Eustice warns ‘time running out’ for EU trade deal

Storm captain Cameron Smith has dedicated his team’s NRL Grand Final victory to the people of Melbourne struggling through lockdown.

Melbourne stormed to victory despite a ferocious late comeback by the Penrith Panthers that kept the match alive into the final seconds.

‘This big V on my jersey, on our jersey, this is who we’re playing for. Everyone back home in Victoria. This one’s for you, you beauty!’ Smith said after the match.

‘This 2020 season, it’s one like no other and what we’ve been able to achieve tonight, it’s – we’ll never forget it. 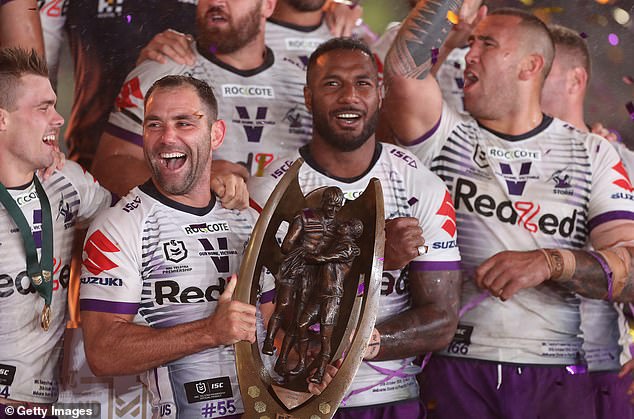 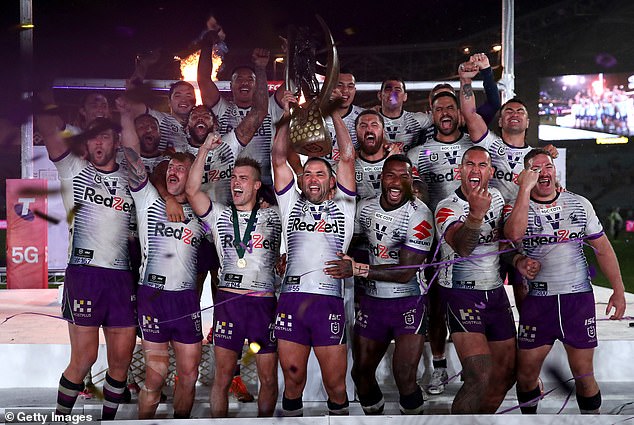 ‘We’ll remember it for the rest of our lives and a big congratulations to everyone, particularly the boys that are celebrating their first premiership.

‘Hold on to that forever, boys.’

Storm held onto a six point lead despite playing with just 11 men for the final minutes after halfback Jahrome Hughes and utility Brandon Smith were sent to the sin bin.

Penrith fought hard to catch up, scoring twice in the last few minutes, but were not quite able to overcome a massive 26-6 deficit.

The match came down to the final seconds where the Panthers needed to go the length of the field in one play to pull of the greatest victory ever.

But it was not to be as the desperate attempt saw a dozen passes to avoid Melbourne defenders, but fell short and finished 22-26. 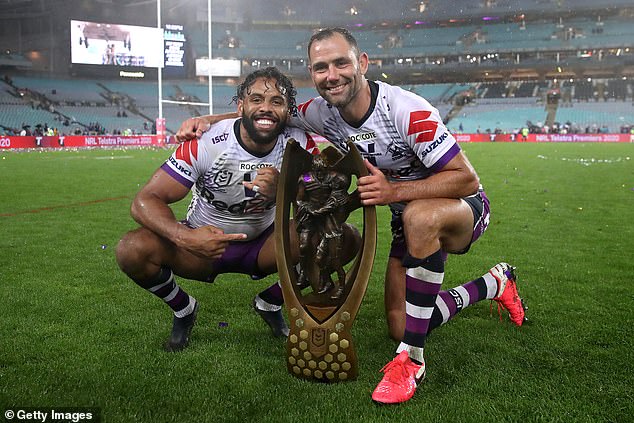 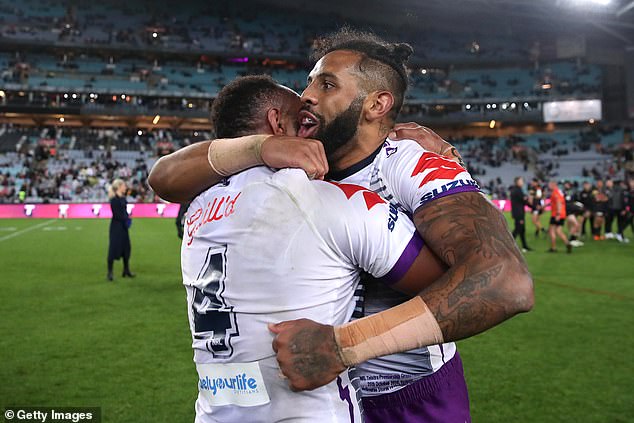 In contrast to Smith’s heroics, halfback Nathan Cleary passed up an opportunity to kick a conversion after scoring a try in the 39th minute, instead trying to rally his team for the final seconds of the match.

After the game, he told New South Wales State of Origin coach Brad Fittler he’d felt like he ‘let down the boys’.

‘It’s super disappointing. I felt like I let the boys down but hopefully we’ll be back,’ he said.

‘There were a few moments where we let in too many ordinary tries and Melbourne Storm are too good for that.’

The 37-year-old Smith faced mounting criticism over his refusal to discuss his potential retirement at the end of the 2020 season.

But on Sunday night, he proved exactly why his coach and teammates have said he could continue playing for years to come, outclassing a young Panthers side.

The captain scored his first Grand Final try in the dying seconds of the first half, making him the highest point scorer in the history of NRL finals. 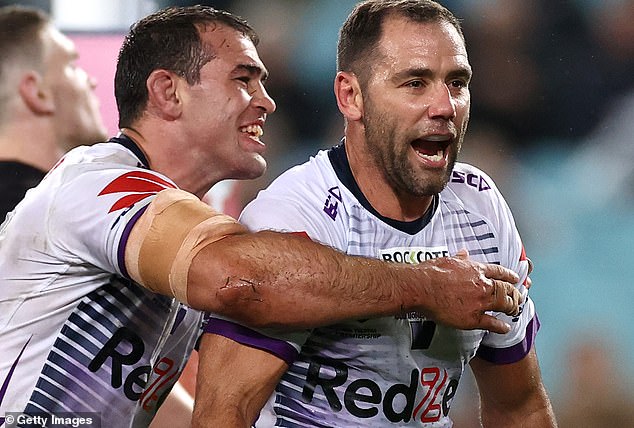 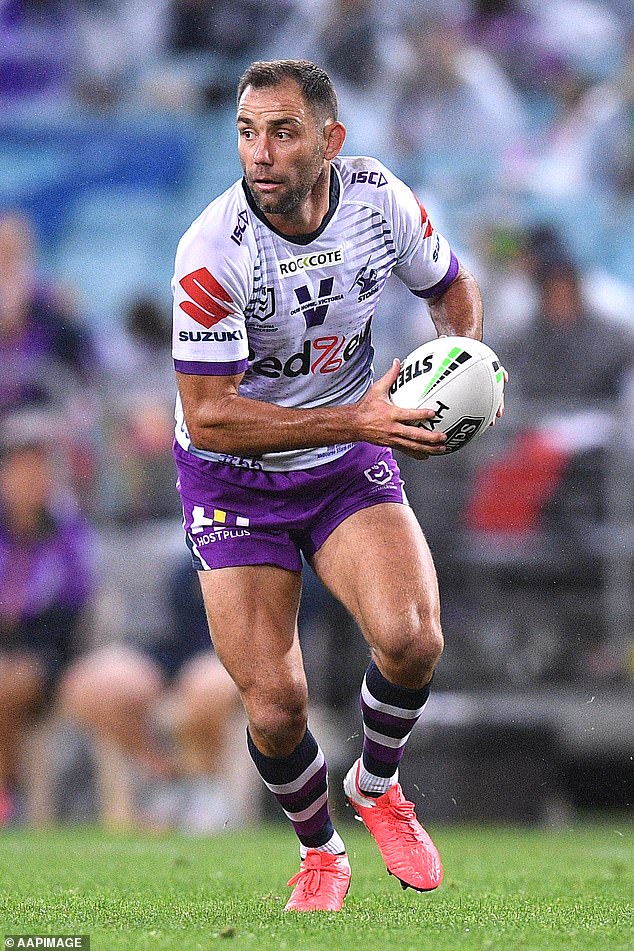 The star hooker, who has not yet confirmed if he is playing his final match in his long and illustrious career, was an early standout for the team, kicking three conversions and two penalty goals in the first half alone.

Earlier this week, he indicated he hadn’t felt the signal that it was ‘time to retire’ like some of his former teammates had felt before hanging up their boots.

Melbourne headed into the match as hot favourites, despite the Panthers team celebrating 17 straight victories and only one loss all season.

The Storm produced the first error of the evening, knocking on seconds after the 7.30pm kickoff.

But within three and a half minutes, Storm centre Justin Olam had found the line.

Penrith utility Tyrone May used his foot to kick the ball out of his hands resulting in a  penalty try to the favourites. 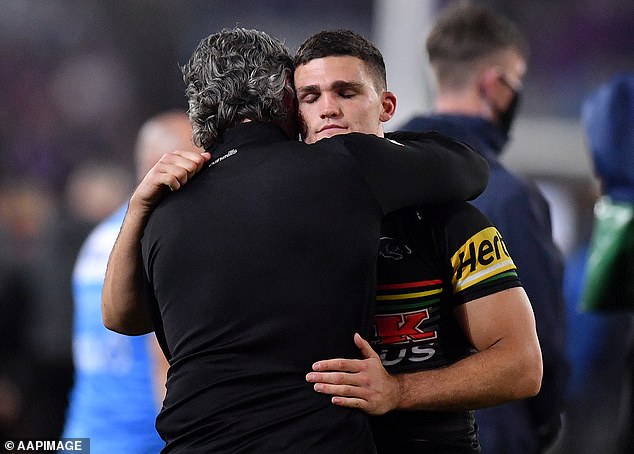 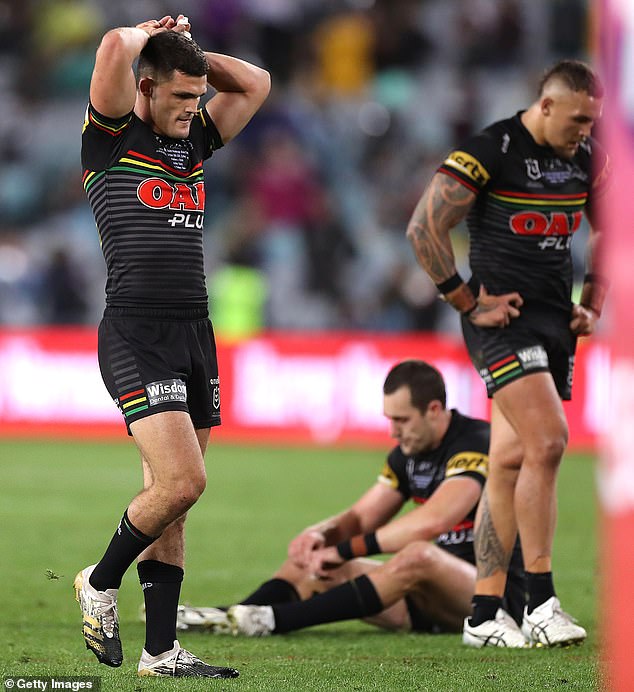 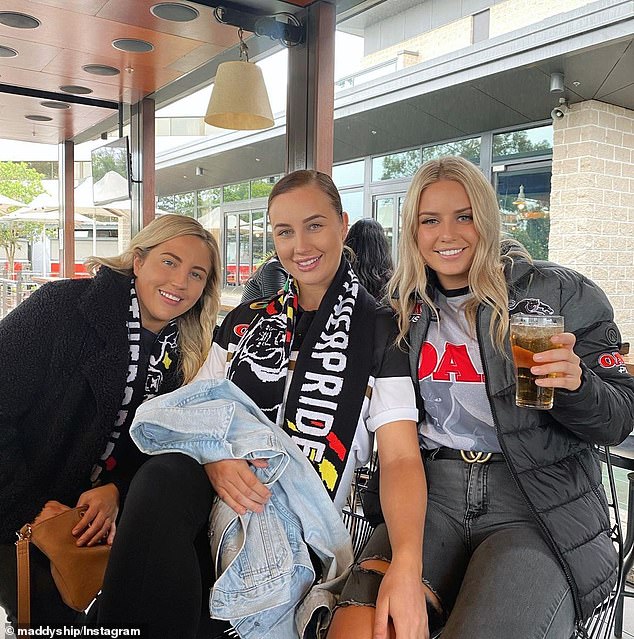 Minutes later, Penrith also looked certain to score but were turned away on the line when the Storm defence rallied and denied Josh Mansour.

He was adamant earlier this week that he wasn’t waiting for a final win to announce his retirement.

‘A lot of people have mentioned about whether we get a good result on Sunday and [how] that will determine things but I can confirm that it won’t make a difference whether we win or lose,’ Smith said.

‘We want to win, there is no doubt about that, but that won’t determine whether I play or not next year.

‘It’s the sacrifices that you make in your own personal life and the commitment that it takes to play in the National Rugby League, and for me it is about weighing that up.’

Smith admitted he felt like he was ‘getting on a bit’ as he edged closer to 40, but was on the fence about hanging up his boots.

‘It is no secret that I am getting on a little bit now. I am 37 and that means my family is as well, and my children are starting to get a bit older. My eldest daughter is 12 going on 13 next year, and they are starting to do a lot of things in their own life,’ he said. 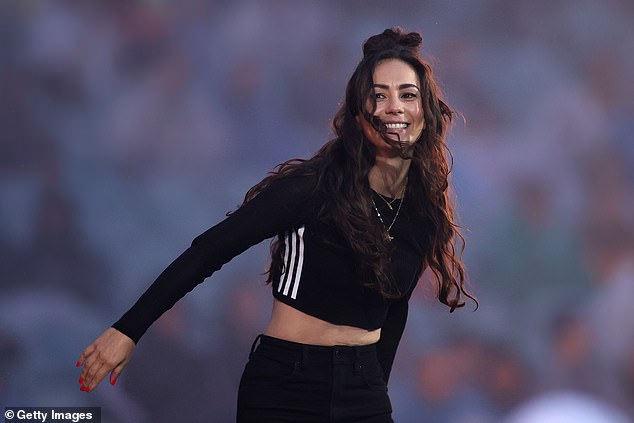 Amy Shark kicked off the pre-game entertainment with her hit single, I Said Hi 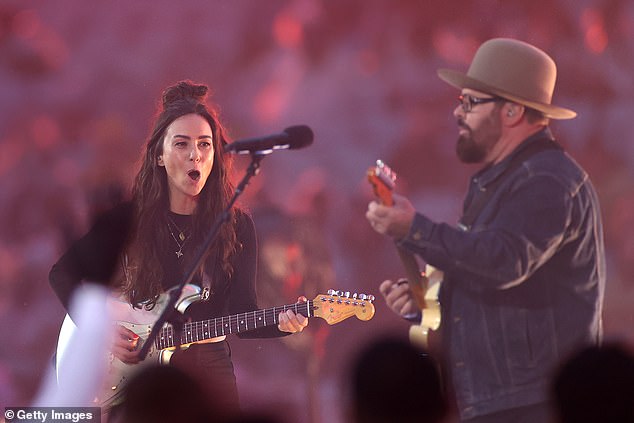 ‘It is more to do with whether I am committed to making those sacrifices anymore; it’s not about how good I feel I am playing or whether I can make a difference to this footy side.’

During half time, Panthers coach Ivan Cleary said his young team still felt they could win the game, despite the scoreline.

‘They know they can’t let in any more points,’ he told reporters on the field.

But within minutes of the second half beginning, fullback Ryan Papehuyzen slipped past the defence to run the length of the field and score.

The 22-year-old, who is playing his first season of first grade football, went on to win the Clive Churchill medal after a standout game.

Amy Shark kicked off the pre-game entertainment with her hit single, I Said Hi.

The songstress looked chic in a long sleeve black crop and black leggings as rain cleared around her. 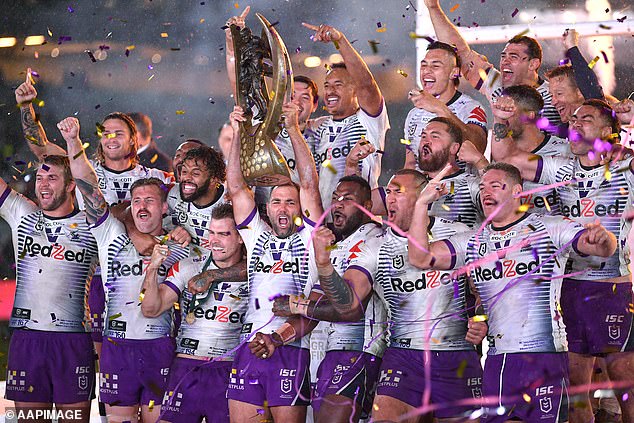 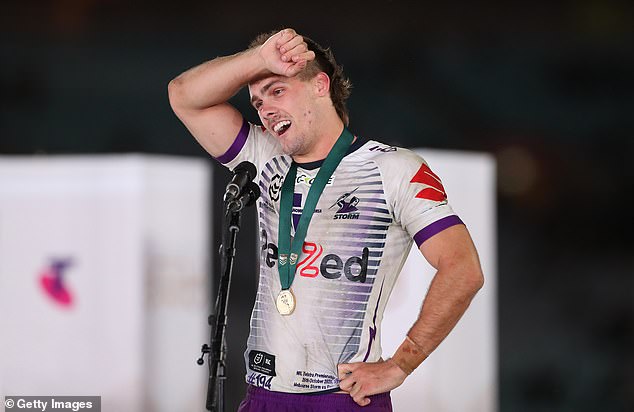 The Melbourne team, who have spent the better part of 2020 living, quarantining and training on the Sunshine Coast to escape Victoria’s lockdown, were granted permission to fly to Sydney on Saturday to rest up before the game.

The same courtesy was not offered last weekend to their Canberra Raiders competitors, who crashed out of the competition hours after flying into Brisbane for the preliminary final.

The Sunshine State did not grant them an exemption to fly in early for the match.

As per Queensland’s quarantine rules, Storm players and staff were ordered to remain in their hotel rooms until arriving at ANZ stadium for Sunday night’s game.

They appeared nothing short of energetic as they made their way around the sheds hours before kickoff.

Meanwhile the Panthers travelled the hour from Panthers, at the foot of the Blue Mountains, after they were greeted by hordes of fans. 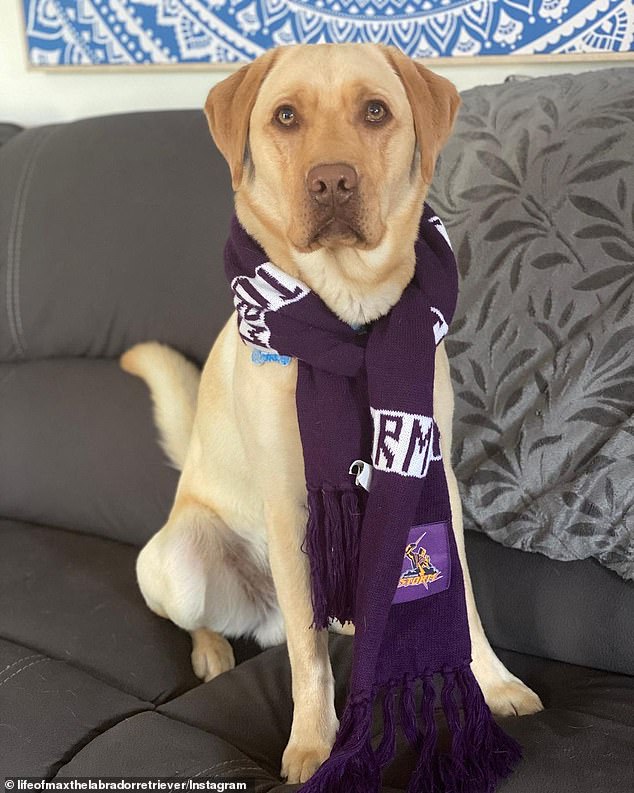 Pictured: A Storm fan dressed their dog up ahead of the Grand Final match 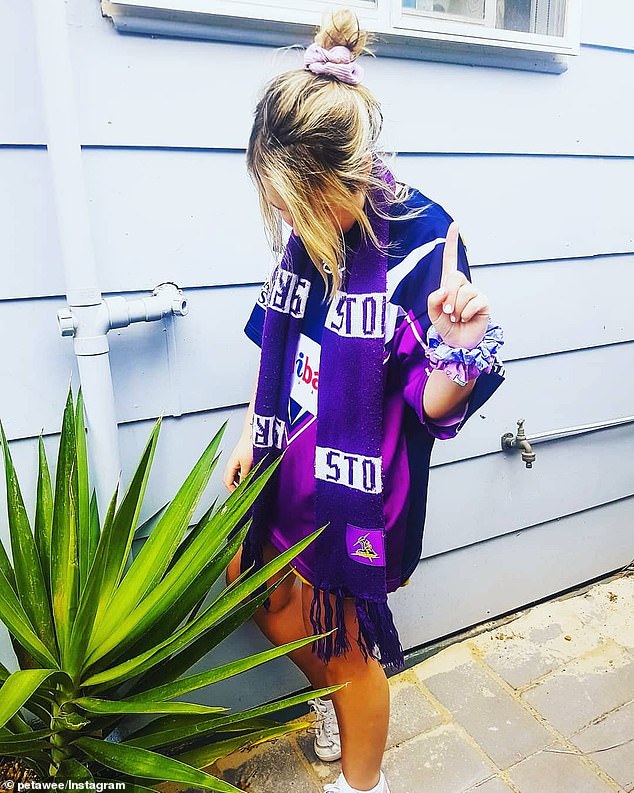 The Melbourne team, who have spent the better part of 2020 living, quarantining and training on the Sunshine Coast to escape Victoria’s crippling lockdown, were granted permission to fly to Sydney on Saturday to rest up before the game 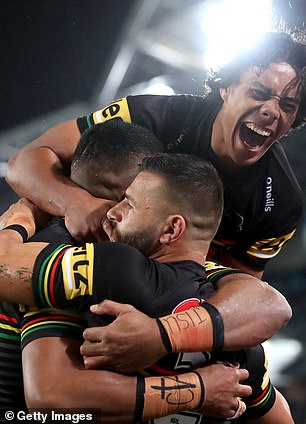 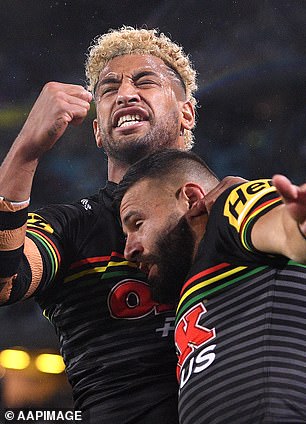 Penrith fans have gone all out since last Saturday, when the team edged out South Sydney Rabbitohs for a spot in the big dance.

Local businesses and devout fans have been living in their jerseys, decorating their homes and buildings with balloons, streamers and even baking themed snacks to celebrate their team’s first Grand Final appearance in 17 years.

One local family told Daily Mail Australia the household had been buzzing with ‘a special kind of energy’ since last weekend.

‘This whole season has been different. We knew it would come,’ they said.

‘This team is special.’

On Sunday morning they stocked the fridge with alcohol, blew up balloons in black, red, yellow and green and attached streamers to their roof, certain their team would be victorious.

The Penrith Panthers made their first Grand Final appearance in 1990 under the guidance of coach Phil Gould, but lost to a star-studded Canberra Raiders outfit.

Just 12 months later, a rematch Grand Final yielded very different results, and the boys from the foot of the mountains secured their first premiership win. 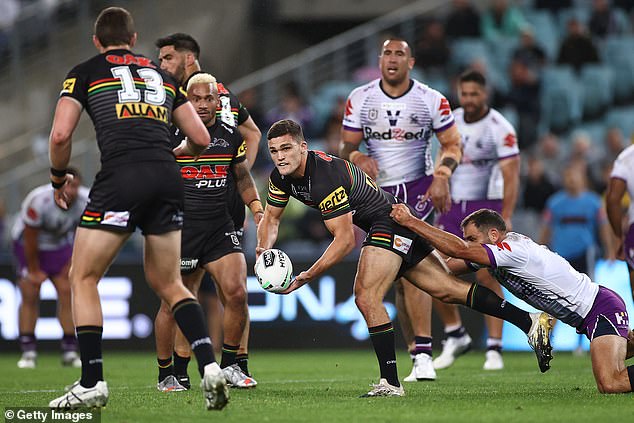 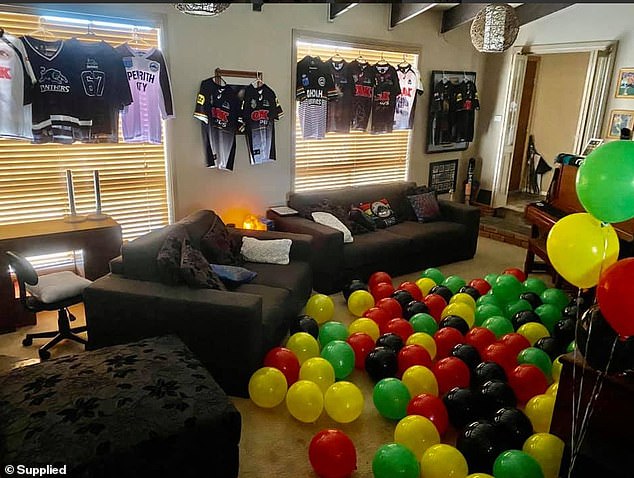 Local businesses and devout fans have been living in their jerseys, decorating their homes and buildings with balloons, streamers and even baking themed snacks to celebrate their team’s first Grand Final appearance in 17 years 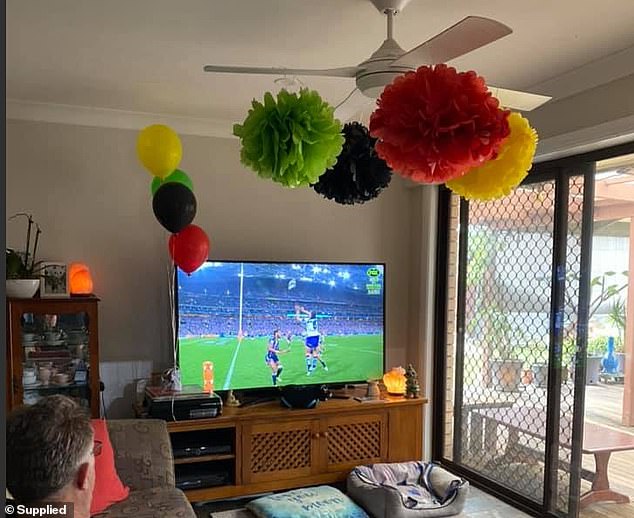 Penrith fans have gone all out since last Saturday, when the team edged out South Sydney Rabbitohs for a spot in the big dance

But the last time the club tasted victory was in 2003, when the then minor premiers secured a shock win over the Sydney Roosters.

Given the youth of the current 2020 side, most of the men would’ve been pre-schoolers and toddlers at the time.

Meanwhile Melbourne Storm have been largely considered the most dominant NRL club in modern history.

With appearances in five of the last 10 Grand Finals, there was mounting concern a young Panthers contingent simply couldn’t beat a side with so much experience.

The club notoriously had the 2007 and 2009 premierships wiped from the record after admitting to breaching the salary cap, but went on to win again in 2012 and 2017.

Fans of the game packed into ANZ Stadium on Sunday night, which could only facilitate 40,000 people due to COVID-19 restrictions. 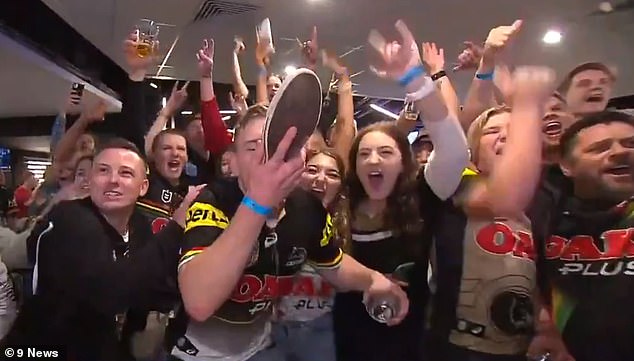 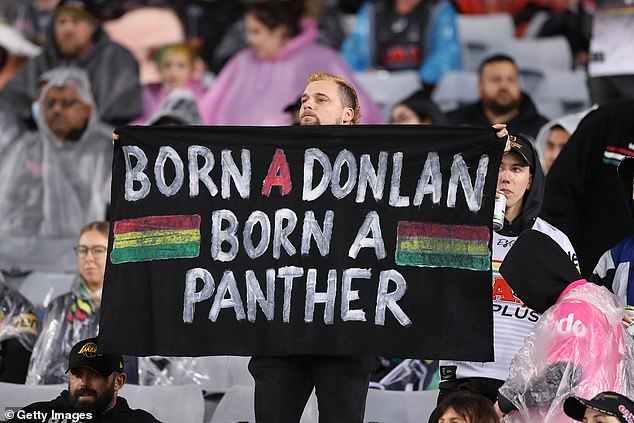 More fans were welcomed at the Panthers’ home stadium back in Penrith, where tickets were sold for diehard fans to watch the game on the big screens.

Local pubs and clubs were also brimming with patrons – all wearing their club colours.

Meanwhile in Melbourne, fans were discouraged from heading out of home to watch the game anywhere as the city fights to get a second wave of COVID-19 under control.

Premier Daniel Andrews was expected to ease restrictions on Sunday, but reneged on the promise after a spike in infections.

The NRL very nearly never had a 2020 season when the pandemic all but shut down Australia in late March.

The game was suspended for two months as figureheads worked hard to figure out a way to make the game sustainable during a pandemic.

On May 28, the code became the first to restart, alongside strict player protocols and a bubble which kept players isolated. 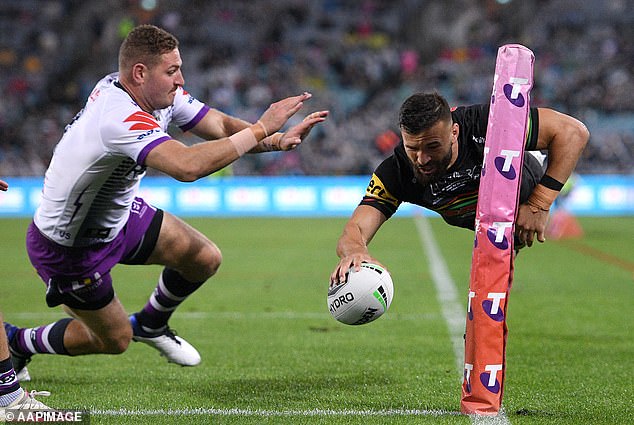