Cafe worker in coma with broken arms, legs and pelvis after crash that saw other driver arrested

The family of a cafe worker has been left 'devastated' after their daughter was left  fighting for her life following a crash near Skegness.

The family of a cafe worker has been left ‘devastated’ after their daughter was left  fighting for her life following a crash near Skegness.

Hope Starsmore, 20, was left with broken arms, legs and a damaged pelvis after the crash in Burgh le Marsh, Lincolnshire, last Wednesday.

She has been put into a coma and remains in a critical condition.

A 32-year old woman was arrested for driving while unfit to do so and has been released under investigation.

The collision on the morning of Wednesday October 7 took place on Skegness Road and involved a Toyota Yaris, driven by Ms Starsmore, and a Ford Focus.

Ms Starsmore was airlifted to Hull Royal Infirmary and placed into a medically-induced coma after the incident having suffered serious injuries including broken arms, legs, pelvis and internal bleeding.

Since the crash, Hope’s best friend Brook Salter set up a fundraiser to help support her and her family with any possible care or rehabilitation she may need when she wakes up. 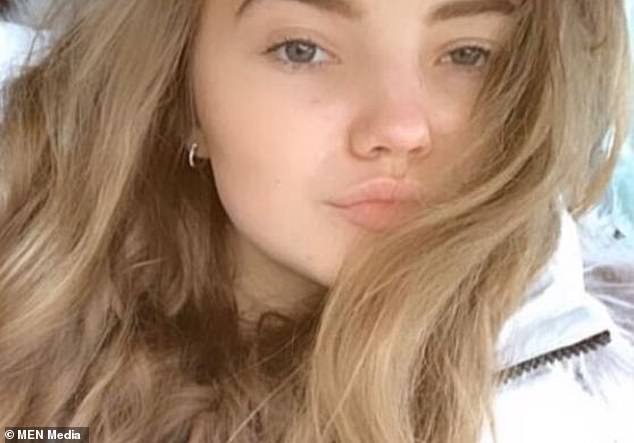 Hope Starsmore, 20, (pictured) was placed into a medically-induced coma after the crash in Lincolnshire having suffered serious injuries including broken arms, legs, pelvis and internal bleeding

He said: ‘The first 24-hours were the worst because we didn’t know whether she would pull through.

‘Hope had to go into surgery for eight hours to stop the internal bleeding, and has since had an operation on her arms and pelvis which all went well, but we understand that doctors are now looking at possible brain damage.

‘It’s difficult because we don’t know until she wakes up what kind of care she’ll need.

‘Her parents are devastated.

‘Because of coronavirus, they can only see her for an hour a day.

‘All we can do is be there to support them.’

The fundraiser was set up originally to support travel and accommodation costs for Hope’s family, but will now also be used to help fund any future care and rehabilitation Hope may need.

Brook said: ‘Brook had just started studying medical science this year and has mentioned before she wants to be a paramedic.

‘We’ve been told it could be six months before Hope leaves the hospital and we want to support her in the care she needs afterwards.

‘The family are already devastated and have enough stress on their plate, so it’ll be nice to do something to ease that.’

In an appeal for witnesses, a Lincolnshire Police spokesperson said: ‘We are appealing for anyone who may have seen this collision and in particular a van which we believe was travelling behind a Toyota truck which was indicating right to turn in to the layby on Skegness Road around the time of the collision.

‘We would also appeal for anyone with dashcam footage to contact us.’

The road was closed for several hours after the incident as vehicles were cleared and an investigation began.

Anyone with information is asked to call police on 101, quoting incident 62 of October 7.