Buried at sea: Italian cliff-top cemetery collapses into the ocean

A part of an Italian cliff-top cemetery has collapsed into the ocean, with dozens of coffins floating off into the Mediterranean with many others

A part of an Italian cliff-top cemetery has collapsed into the ocean, with dozens of coffins floating off into the Mediterranean with many others feared to have been buried under the rubble.

The landslide struck the cemetery on Monday at around 3pm in Camogli, a tourist resort near the north-west city of Genoa, taking around 200 coffins and destroying two chapels at the burial ground.

Pictures from the aftermath showed a large portion of the cliff collapsed into the ocean, with coffins among the rubble and debris floating some 160 feet below.

Efforts are underway to save as many of the coffins as possible, as relatives of those buried in the cemetery face an anxious wait to find out if their loved ones’ remains were among those to be swallowed by the landslide. 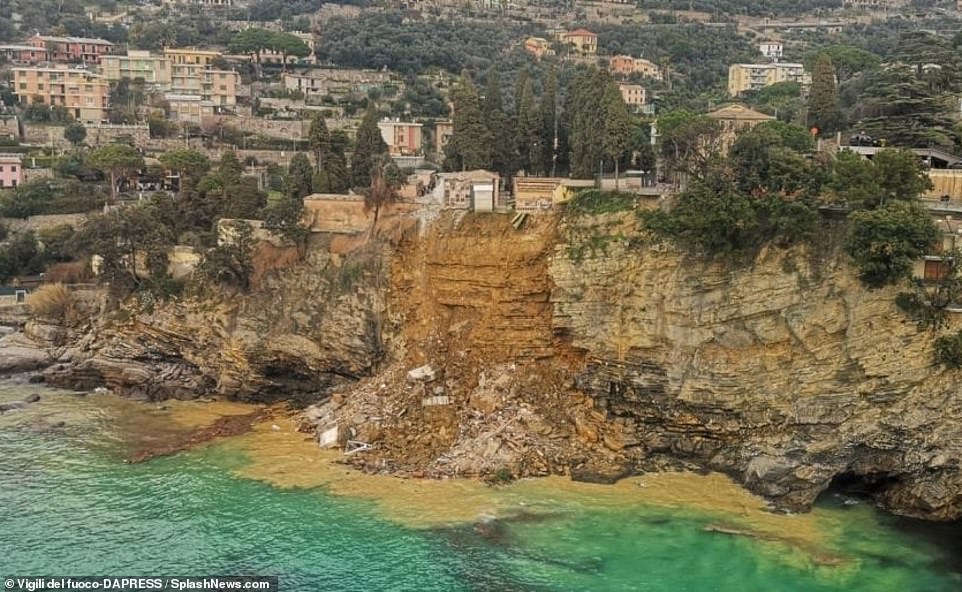 Pictured: The portion of the cliff, on top of which the Camogli was built, that collapsed into the sea on Monday. It is feared that around 200 coffins have been dragged into the ocean with the landslide

Local reports suggested that the landslide was the result of coastal erosion, exacerbated by recent storms in the Mediterranean region of Liguria, known as the Italian Riviera.

Residents reported hearing the landslide from their homes, with some saying that they ran to the cemetery when they heard the cliff falling into the sea.

Some expressed their anger at the event, saying they had likely lost the coffins and ashes of loved ones in the disaster, noting that little was done to move people’s remains away from the unsafe part of the cemetery.

Another local, Dimitri Perini, told the newspaper: ‘I was at home, a neighbour said to me “Did you hear what happened?” And I ran here. I have my dad, I have my grandfather who rest in the part of the cemetery that collapsed.’

Germana Zoppi said he was angry, claiming cemetery officials continued to sell plots to people that have now vanished into the sea.

‘I lost my grandmother, I don’t even know if we will find her again. And now I try to understand that my father didn’t go down too. It’s a shame,’ he told Il Secolo. 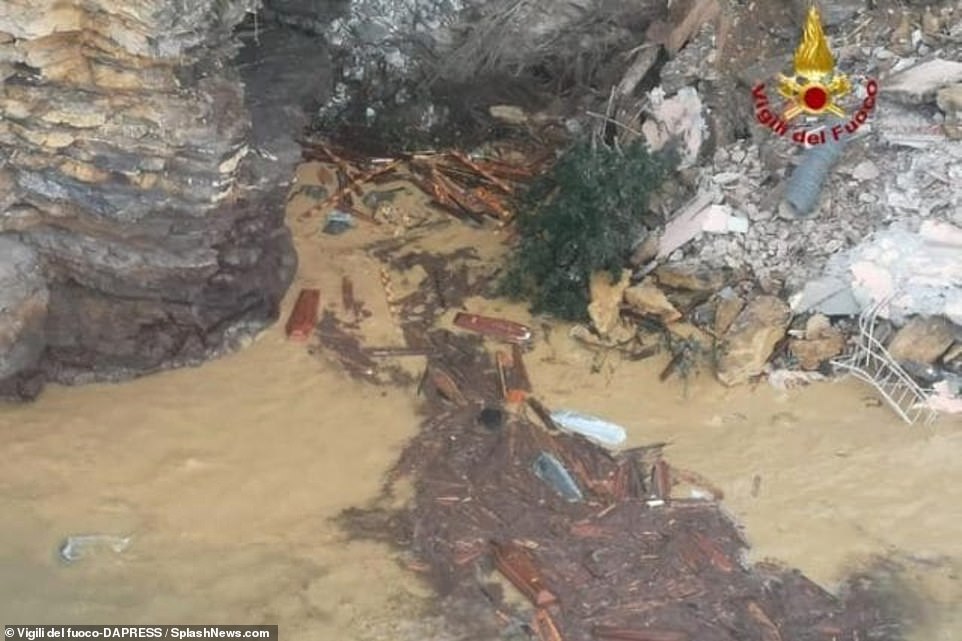 Pictures from the scene showed coffins in the water among the debris, some 160 feet below the top of the cliff 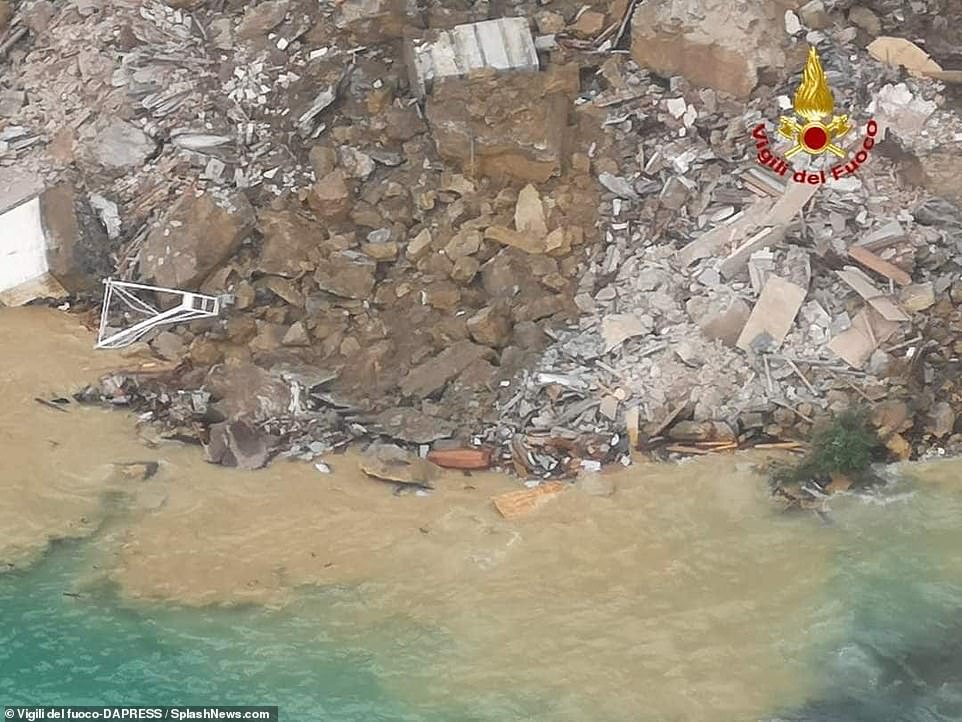 Efforts are underway to save as many of the coffins as possible, as relatives of those buried in the cemetery face an anxious wait to find out if their loved ones’ remains were among those to be swallowed by the landslide 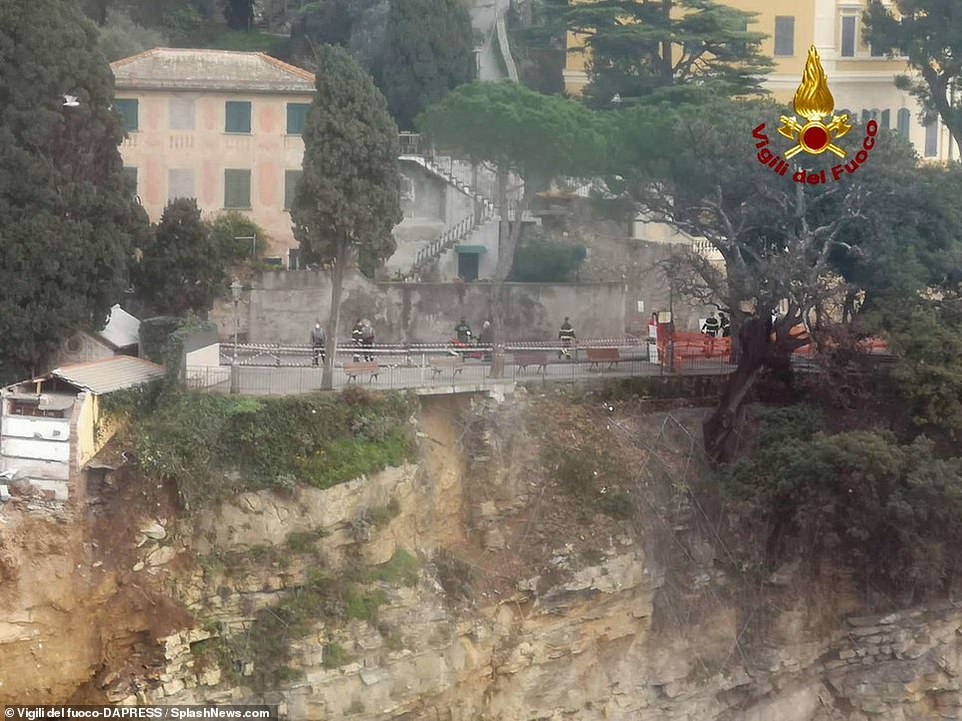 Pictured: Firefighters were among the emergency service workers at the scene of the collapse working to recover as many of the lose coffins as possible while also securing the area

The Camogli cemetery built on the side of the cliff is 150 years old, and work to make the cliff stronger ‘had been going on for some time’, the local mayor said after the collapse.

Mayor Francesco Olivar, a geologist by trade, said the landslide was difficult to predict in advance, and that a large part of what collapsed is facing the cliff, meaning that most of the coffins could be buried under the landslide.

Thankfully the cemetery was closed to the public – as it always is on Mondays – and there are no reports of anyone being hurt in the coastal collapse.

Efforts to return the coffins to dry land continued into the night on Monday and into Tuesday, with 10 coffins recovered on Monday evening, and it will be left to a coroner to identify the recovered bodies.

Local authorities have deployed drones as part of the recovery efforts, while videos showed emergency service workers on boats at the foot of the cliff assessing the situation on Monday evening.

Another video, filmed from the cemetery at the time of the landslide, showed people assumed to be workers watching from the roof of a mausoleum, as another – whose roof has already partially collapsed – falls into the sea. 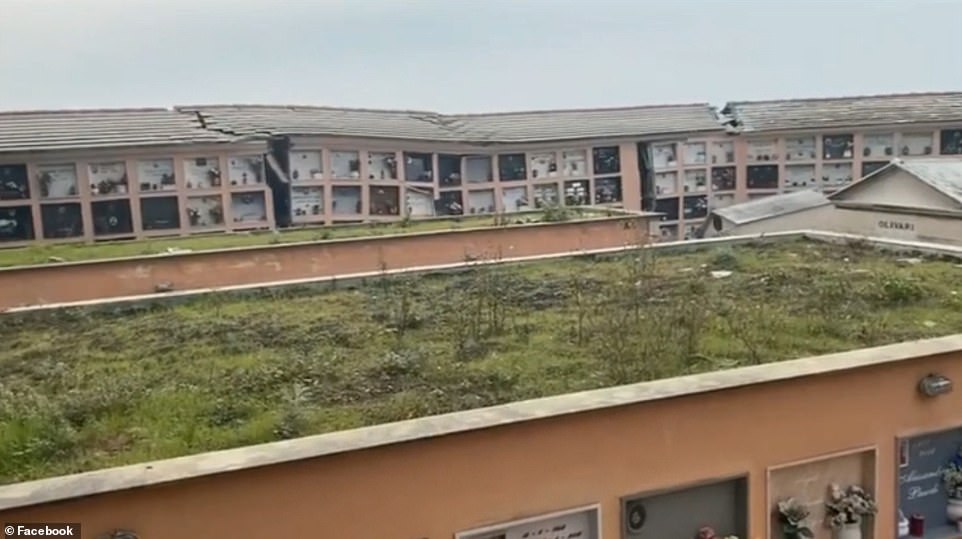 Pictured: A still from video showing the moment of the collapse from the cemetery. The video, taken by someone believed to be a worker who was at the cemetery at the time, showed the roof one of the mausoleums containing coffins collapsing 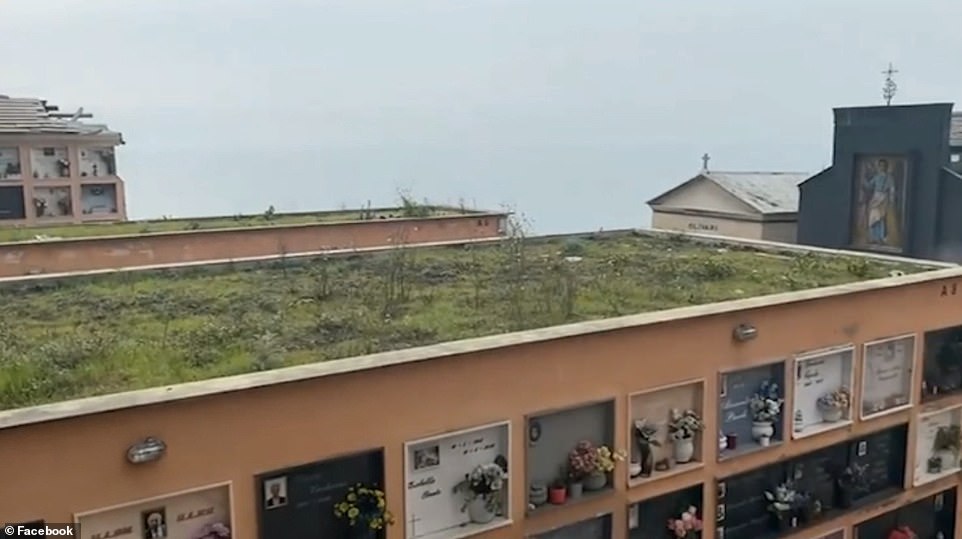 The video then shows the mausoleum suddenly sink out of sight and fall down the cliff as the land beneath gave way, taking coffins and people’s ashes with it

Further down the cliff from the cemetery, there are also ten houses, three of which are reportedly inhabited. The residents of the houses were offered temporary accommodation by city officials following the collapse.

Creaks had already been heard on Sunday, giving locals a sense of what was coming, with the area that has now collapsed being cordoned off. Rock climbers had also already been surveying the cliff.

But despite the signs, the mayor still said the collapse was ‘unpredictable, especially in its vastness.

‘What happened today I insert it among the darkest moments I experienced as mayor and I am close to all my fellow citizens,’ he said.