The UK is recording more coronavirus cases relative to the size of its population than the US for the first time since March, data shows.In another gr

The UK is recording more coronavirus cases relative to the size of its population than the US for the first time since March, data shows.

In another grim milestone in Britain’s second wave, there were 143 cases per million people on October 5, compared to America’s rate of 130 per million.

It’s the first time Britain has recorded more infections per capita than the US since March, when the UK was bombarded with an influx of cases from western Europe.

Yesterday the UK’s case rate continued to trend in the wrong direction, with 161 per million people — 20 per cent more than the 134 reported in the US.

The last time the UK was experiencing a higher volume of cases than the US was on March 22, when it posted 11.6 cases per million compared to 10.3 across the Atlantic.

The data is worrying because it suggests Britain’s crisis is now worse than in the US, which has consistently reported the highest number of deaths and cases of anywhere in the world.

The US is still recording almost three times the raw number of infections as the UK, but its population is more than quadruple the size of Britain’s, which explains the lower case rate.

In the last week there have been roughly 44,000 cases of the disease every day in the US, compared to nearly 12,000 in Britain. Overall, the US has recorded 7.5million infections compared to 532,000 in the UK, according to John Hopkins University estimates.

Like all countries during the pandemic, Covid-19 has disproportionately affected major cities in America. But large swathes of the rural Mid West and West Coast have went unscathed through the crisis — for example, Wyoming has recorded fewer than 7,000 total cases compared to 840,000 in California. 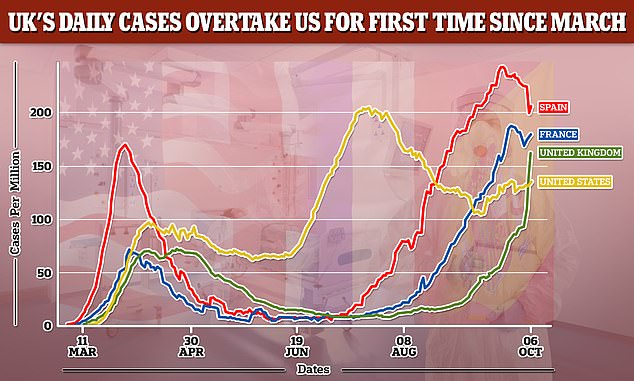 The UK is recording more coronavirus cases relative to the size of its population than the US for the first time since March, data shows. There were 143 cases per million people on October 5, compared to America’s rate of 130 per million 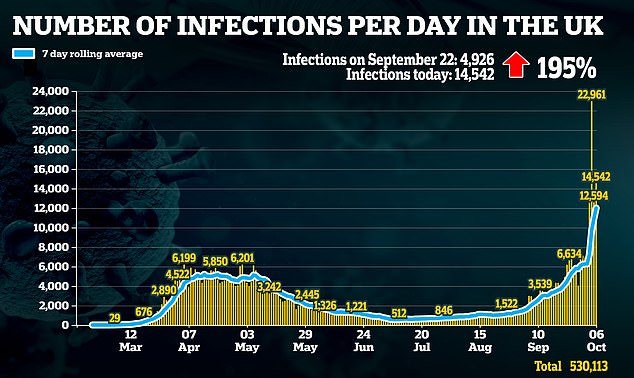 Britain recorded 14,542 more coronavirus cases on Tuesday as the number of people testing positive for the virus every day triples in a fortnight 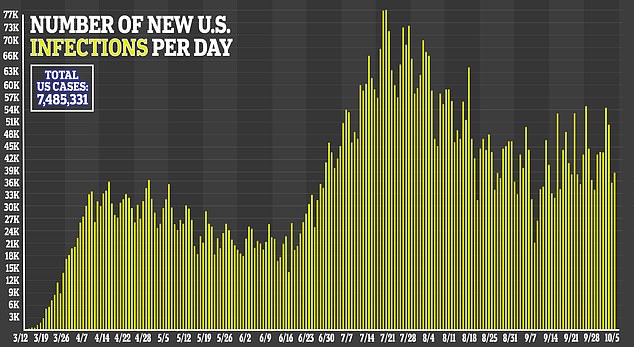 In the last week there have been roughly 44,000 cases of the disease every day in the US 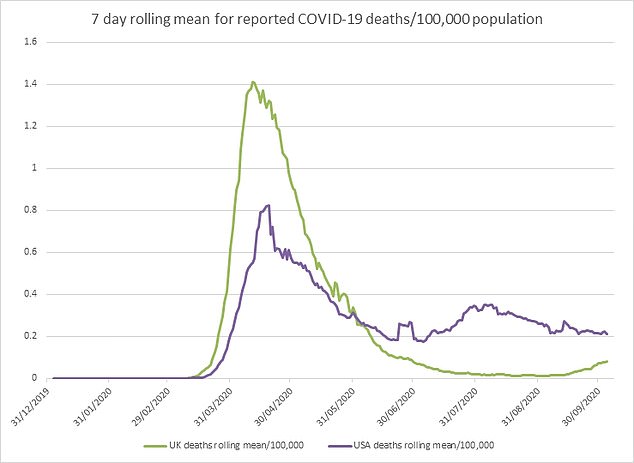 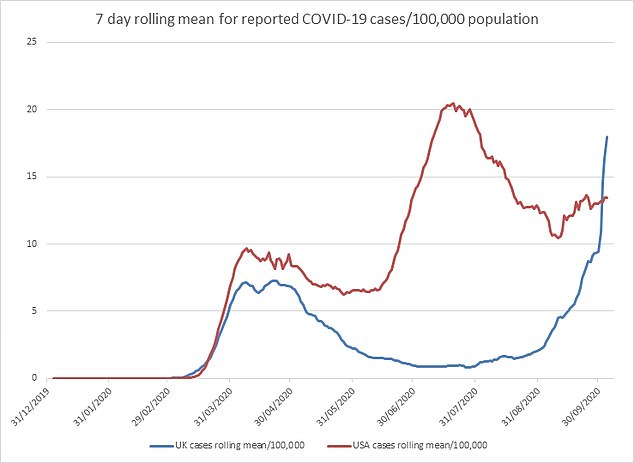 Professor Paul Hunter, a medical expert and epidemiologist from the University of East Anglia, told MailOnline: ‘All things being equal, the UK was probably always going to have a higher infection rate than the US because of our much greater population density, but of course other things are not equal.

‘We had a much stronger population wide lock down from late March. It is too early to say what will happen in the US over then next couple of months.’

Britain’s outbreak is quickly catching up with France and Spain, which have been hit hardest by the second wave of the virus rolling through Europe.

The most recent figures from October 7 show France is suffering about 184 cases per million. The rate is even higher in Spain, with 205 infections per 100,000, according to Our World In Data, a website which aggregates Covid-19 statistics from every corner of the globe.

Both countries have locked down their capital cities in a desperate bid to curtail their spiralling cases, which are still nowhere near the levels during the first wave of the crisis, when hundreds of thousands were catching the disease every day and millions went undiagnosed.

Spain has recorded 825,000 total cases, with Russia the only European country with more infections. France has recorded roughly 675,000.

Spanish officials have enforced a lockdown in and around Madrid, with rules banning 160,000 a million people from leaving their districts.

Throughout Madrid and its surrounding region, gatherings are already limited to a maximum of six people. 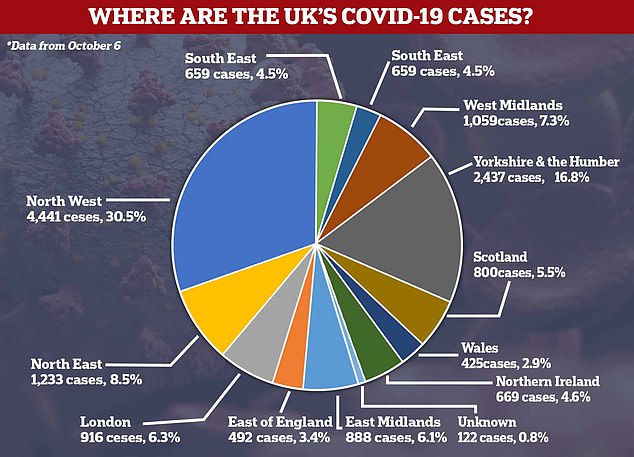 The truth about England’s second wave of Covid-19: Hospitalisations are 6% of peak levels in the South but 30% in the North

The numbers of people being admitted to hospital with Covid-19 have levelled off in huge areas of England as data suggests the country is being dragged into panic by an out-of-control outbreak in the north.

In London, the South East and the South West – home to around half of the country’s population of 55million – daily admissions appear to be plateauing after rising in line with cases during September from a low point over the summer.

However, admissions are still accelerating in the North West, North East and Yorkshire, where new local lockdowns are springing up every week and positive tests are spiralling to record numbers. But as talk grows of a second national lockdown when winter hits, figures suggests the south faces being lumped under rules it doesn’t need.

The picture is more complex in the Midlands and the East of England – in the Midlands hospitalisations rose dramatically during September but there are signs they have peaked now, while admissions appear to still be rising slowly in the East, although at significantly lower levels than in the northern regions.

Numbers of people in hospital in the worst affected areas have hit almost a third of what they were during the peak of the crisis in April, while in the south of the country they are still much lower at around six per cent.

In the North West there are now an average of 107 people admitted to hospital with coronavirus every day, along with 94 per day in the North East. Both figures are the highest seen since May and do not show signs of slowing. For comparison, the rates at their peak for each region were around 2,900 and 2,600 per day, respectively.

On the other hand in London, where officials are reportedly discussing tougher measures, there are just 34 admissions per day – down from an average 39 on September 25 and just 4.5 per cent of the level seen at the peak of the crisis in April. And in the South West, which has been least badly hit throughout the pandemic, just eight people are sent into hospital each day – six per cent of the peak number.

Similarly to the UK, Spain struggled earlier this year to implement an effective ‘find, test, trace, isolate and support system’ before ending lockdown following the first wave of the pandemic, according to a team of experts who compared the strategies in nine Asian and European countries in an article published this week in the medical journal The Lancet.

Meanwhile French officials have imposed strict new regulations in Paris. Bars in the capital, along with Lyon and nine other hotspot cities now have to close at 10pm.

There is also a 10-person restriction at public gatherings with attendees at weddings and parties limited to 30.

Gyms and other indoor sporting facilities will also remain closed and it remains mandatory for all pedestrians to wear face masks in public areas in the capital.

The new measures introduced in Paris come as France is seeing a squeeze on its hospitals.

Medics in the capital, along with Marseille, have been forced to postpone scheduled surgeries to free up space.

Patients are still facing backlogs caused by the lockdown in March and April – and more than 6,000 coronavirus patients are now being treated in French hospitals. And at least 10 per cent of French intensive care beds are now occupied with Covid patients.

Meanwhile, Britain yesterday recorded 14,542 more coronavirus cases, with the number of people testing positive for the disease every day having tripled in a fortnight.

Last Tuesday’s data, which would normally be used to measure how much the UK’s outbreak has grown in the last week, is unreliable due to a catastrophic counting error at Public Health England. It means Tuesday September 22 is the most recent point of reference — there were just 4,926 cases on that date.

The extraordinary meltdown — caused by an Excel problem in outdated software at PHE — meant almost 16,000 cases went missing between September 25 and October 2, meaning the scale of the escalating crisis was vastly underestimated last week.

Health chiefs recorded 12,594 coronavirus cases on Monday, which was also triple the figure of 4,368 recorded a fortnight before.

The rolling seven-day average of daily infections — considered a more accurate measure because it takes into account day-to-day fluctuations — has also risen by a similar amount over the same time frame.

Another 76 coronavirus deaths were also recorded on Tuesday, up 7 per cent on last week’s 71 fatalities and more than double the number of victims posted the Tuesday before, when there were 35. Data also shows the rolling seven-day average number of daily deaths is 53, up from a record-low of seven in mid-August.

Although the curves are clearly trending the wrong way, the number of Covid-19 deaths and infections are still a far-cry from levels seen during the darkest days of the pandemic in spring, when more than 1,000 patients were dying and at least 100,000 Britons were catching the disease every day.

The spiralling statistics come amid fears the UK could face draconian new lockdown measures within days under plans for a local ‘Covid alert’ system. Health Secretary Matt Hancock is expected to unveil details of the three-tier set-up as early as Thursday in an attempt to make the existing patchwork of restrictions easier to understand.

Government sources said the top tier would include tougher restrictions than those currently applied to millions of people living across the North and Midlands. A planned ‘traffic light’ syste