Australia’s biggest gas project could be shut down for months

Australia's largest gas project, the Gorgon development off the West Australian coast, is at risk of being shut down for months after workers raised s

Australia’s largest gas project, the Gorgon development off the West Australian coast, is at risk of being shut down for months after workers raised serious safety concerns.

The liquefied national gas plant on Barrow Island, 60km off the Pilbara coast, is operated by Chevron Australia and supplies gas locally and across Asia.

But the $US54 billion ($A76 billion) venture is under threat of a temporary shutdown after reports of ‘massive’ cracks in pressurised propane kettles on one of three LNG trains. 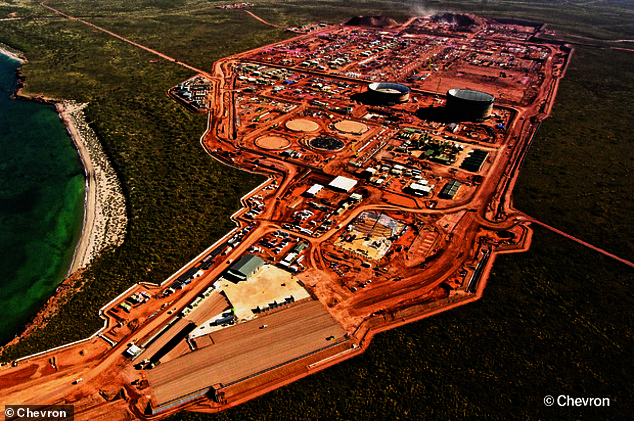 The liquefied national gas plant on Barrow Island, 60km off the Pilbara coast, is operated by Chevron Australia and supplies gas locally and across Asia

Cracks up to one metre long and 30mm deep were found on between eight to 11 kettles on Train 2, the Australian Manufacturing Workers’ Union said on Wednesday.

This ‘represents a serious failure in this critical piece of kit’, union state secretary Steve McCartney said in a statement.

‘These kettles are carrying pressurised propane, and the trains are lined up next to each other on the plate.’

Train 2 has been in a scheduled maintenance period since May which had been due to finish on July 11, according to a Chevron activity notice.

The union is concerned there could be similar cracks in the other two trains, which remain in production.

It wants Chevron to shut down Gorgon for an immediate safety inspection.

‘We’re hearing from workers that they’re fearful for their safety and are reluctant to even go out to the blast-proof wall. We share their fears,’ Mr McCartney said.

‘Chevron needs to put workers’ safety first and shutdown for an independent investigation. If something goes wrong, it would be catastrophic.’

In a statement, Chevron Australia said investigations were ongoing in regards to the propane kettles and regulatory authorities had been informed.

‘Maintenance turnarounds are a regular part of safely operating natural gas plants and provide an opportunity to undertake various inspections, repairs and equipment change-outs to ensure safe and reliable operations,’ a spokesman said.

‘The Chevron-operated Gorgon Train 2 turnaround commenced in May and we are pleased with the strong progress made to date, with scheduled work mechanically complete.

‘Learnings from the current maintenance event will inform future turnarounds and afford the same opportunities for improvements.’

Chevron is scheduled to provide a quarterly update to the US market on July 31.

WA’s Department of Mines, Industry Regulation and Safety (DMIRS) on Wednesday confirmed it would inspect the LNG plant as soon as possible.

Director of dangerous goods and petroleum safety Steve Emery said while DMIRS did not have immediate concerns for worker safety, it was taking the matter seriously and had powers to ensure safety obligations were being met.

‘As part of any maintenance action, DMIRS expects all operators to review their findings and to assess the results in light of their entire operation.’