Isabel Lucas has been spotted for the first time since she she went undercover while discussing the coronavirus ‘agenda’ on a live chat with conspiracy theorists and lockdown critics including controversial chef Pete Evans.

The former Home and Away star and staunch anti-vaxxer went to great lengths to stay anonymous during the Zoom call on Saturday, covering her face with a black hoodie and mask and using the alias ‘X’.

However, safe in the womb of Australia’s anti-vaxx capital of Byron Bay this week, and with another storm brewing over whether or not a COVID-19 vaccine should be compulsory, the 35-year-old actress wasn’t being so secretive.

Lucas was spotted looking carefree on Tuesday as she ran errands throughout her hometown, where her former boyfriend of three years, Chris Hemsworth, also lives with his family.

Dressed down in distressed jeans and a white knit, the outspoken activist dropped off an Australia Post parcel and clutched her car keys.

During her bizarre anonymous appearance on the live Zoom call days earlier, Lucas told her co-panellists that she needed ‘to be careful about being outspoken’ because she was a famous Australian film and television actress.

‘I’m here and I don’t want to be anonymous, but I am about to start filming a film and I do need to be careful about being outspoken because you can get dropped from charities, you can lose campaigns with car companies,’ the 35-year-old said.

‘It has happened to me in recent times for speaking out. I feel careful and I don’t want to illicit any aggressive, threatening responses.

Lucas said she felt ‘100 per cent called’ to ‘shine a light on the reality of what’s really going on’ in reference to the COVID-19 pandemic and lockdown directives.

The actress has signed on to feature in The Ogilvy Fortune, an adventure film currently in pre-production, just months after she was dropped as an ambassador for Plan International Australia, a charity for girls’ equality following her controversial comments about coronavirus. 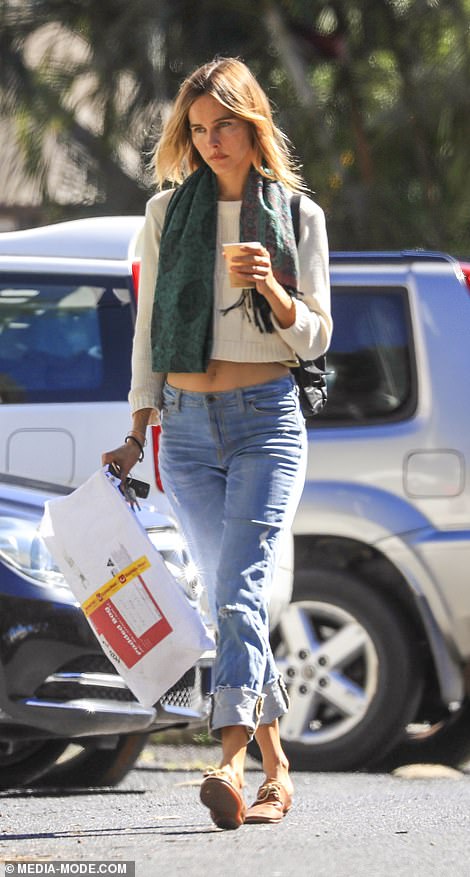 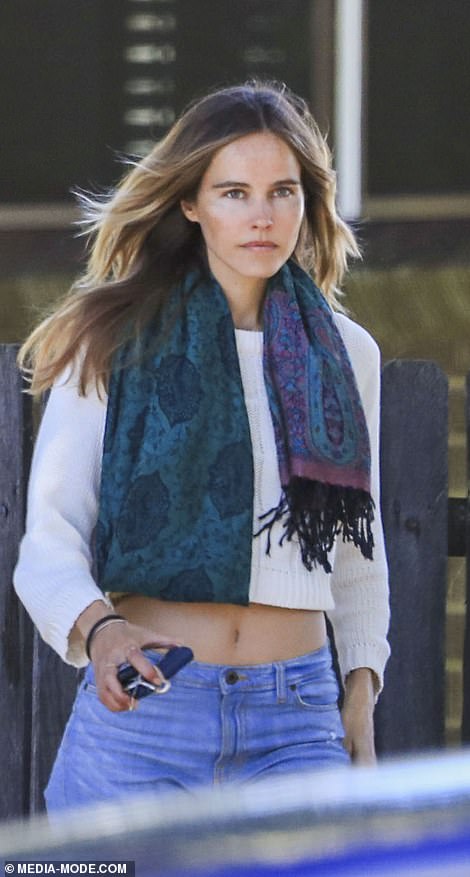 Lucas appeared carefree as she walked through one of Australia’s anti-vaxxer hotspots, Byron Bay, on Thursday 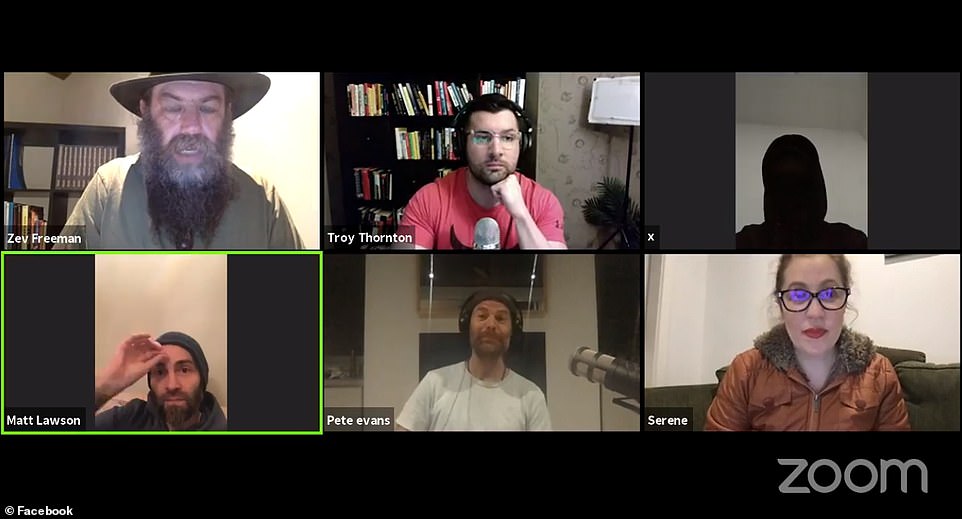 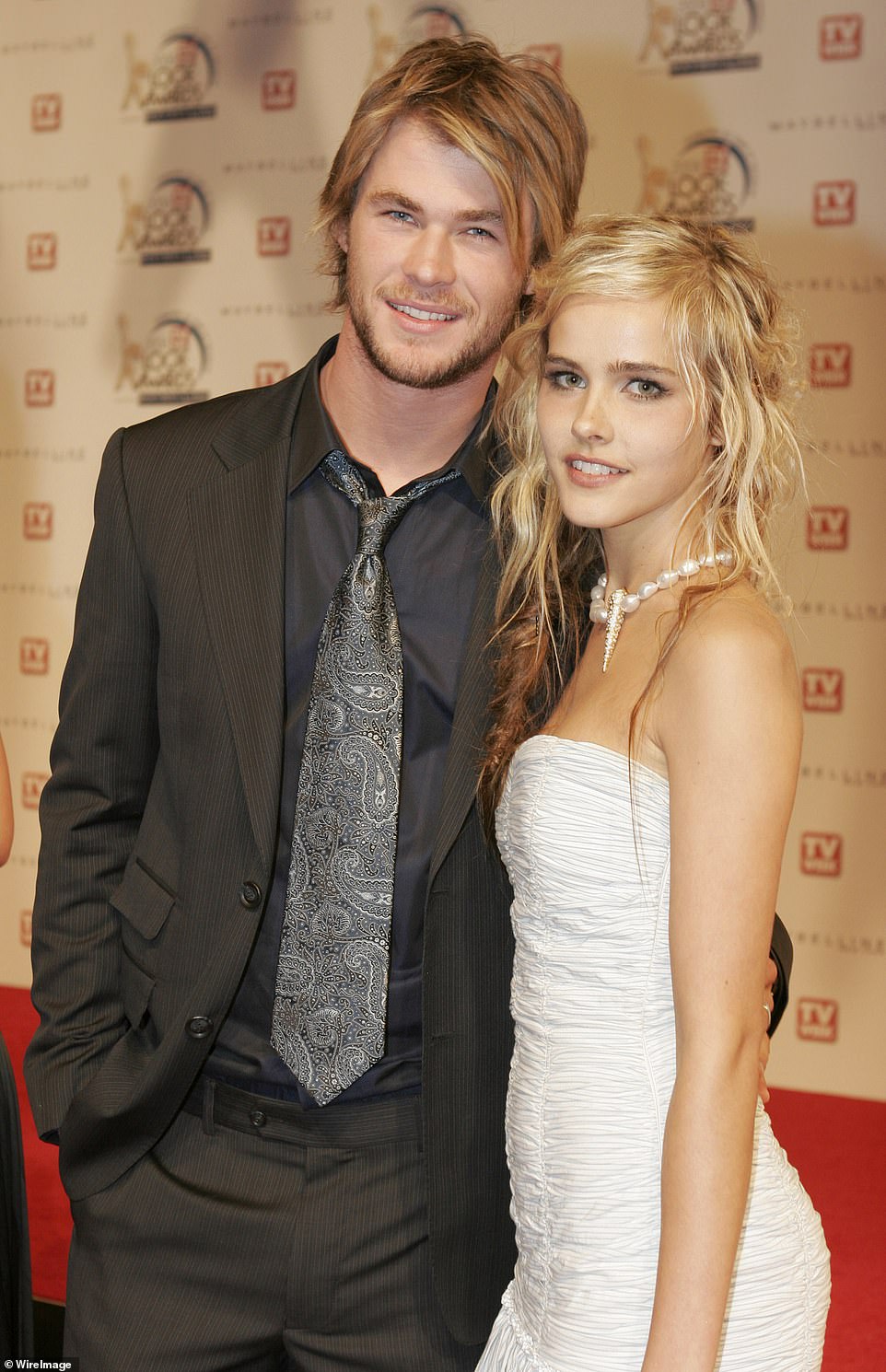 Chris Hemsworth and Isabel Lucas at the 2006 TV Week Logie Awards. The duo both featured on Home and Away and were romantically linked for three years from 2005

‘There’s a certain level of agenda and darkness that has had authority … and that has had a lot of people believing lies,’ she said.

The Transformers: Revenge of the Fallen actress also claimed she met several doctors while living in California who dropped out of the medical field due to ‘corruption’.

‘All of what they were speaking about is what we’re facing right now. When we are in a fear state, we just follow what we’re told.

Lucas said that at the beginning of the pandemic in March she was asked by her local council to film a video calling on locals to stay at home to stop the spread of the virus.

She appeared in the clip urging viewers to avoid travelling in NSW to slow the spread of coronavirus, saying: ‘This is not the right time to be visiting Byron or other coastal towns, it’s a good chance to give nature a break and ourselves.’

Lucas revealed she regretted appearing in the clip during the Zoom chat.

‘I saw that there was all these other great people doing it and it’s that sort of thing where you can get looped in without realising you’re being looped in,’ she said.

‘But those with a strong conscience and strong integrity won’t as easily sell out.’ 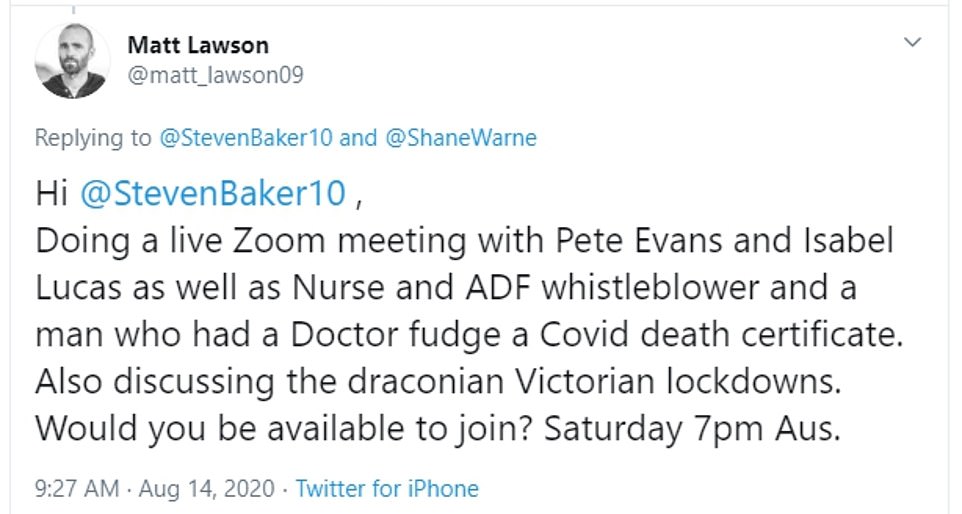 While Lucas went to great lengths to keep her identity hidden, facilitator Matt Lawson named her as a guest in the conference in the days leading up to the event (pictured) 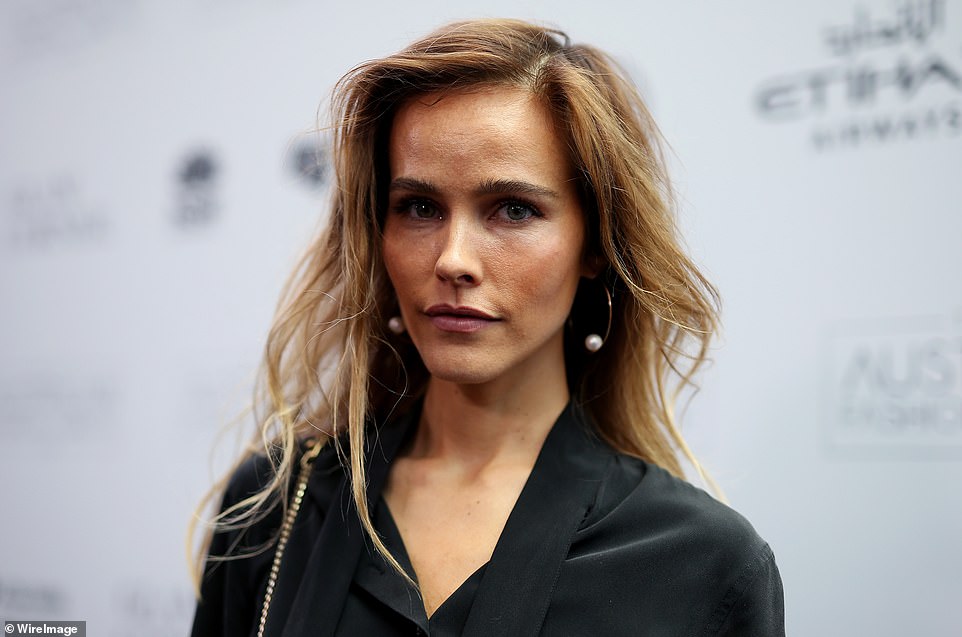 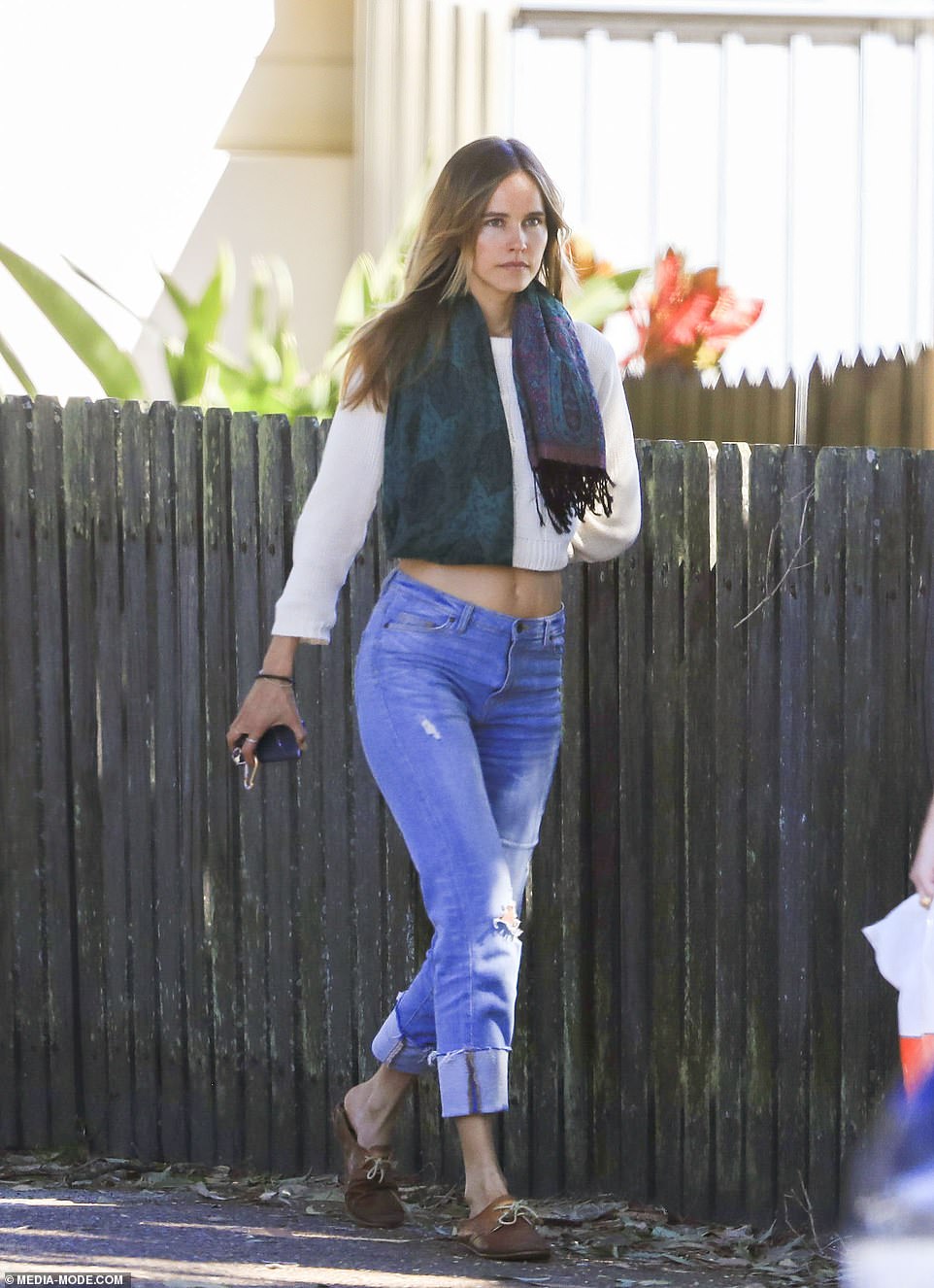 Lucas also revealed that she left Hollywood in 2016 because Donald Trump won the presidential election during the strange Zoom call.

But she said she has since had a change of heart about the president after watching a ‘mind-boggling’ YouTube video about Trump being a ‘lightworker’.

A lightworker is a term used in hippy spiritual circles to describe ‘beings who feel an enormous pull towards helping others’.

Lucas was joined by a string of other coronavirus deniers and lockdown critics during the live-stream.

The chat was spearheaded by Matt Lawson, who has built up a cult following on Twitter by slamming the Victorian government over its ‘draconian’ lockdown.

He gave Lucas’s identity away by revealing the Australian actress would be joining him in the live chat when trying to recruit other celebrities.

‘Doing a live Zoom meeting with Pete Evans and Isabel Lucas as well as Nurse and ADF whistleblower… Would you be available to join?,’ he wrote on Twitter last week.

He asked a string of retired AFL stars and politicians if they would join the Zoom call but none of them replied.

Lucas was also joined by prominent anti-5G activist Zev Freeman, and lawyer Serene Teffaha, who is planning a class action against the Victorian Government over their ‘unlawful’ vaccine mandates and lockdown directives.

Lucas’ manager Lizzi Morrisey told Daily Mail Australia it was ‘speculation’ that the actress went undercover for the chat, but refused to deny it was her. 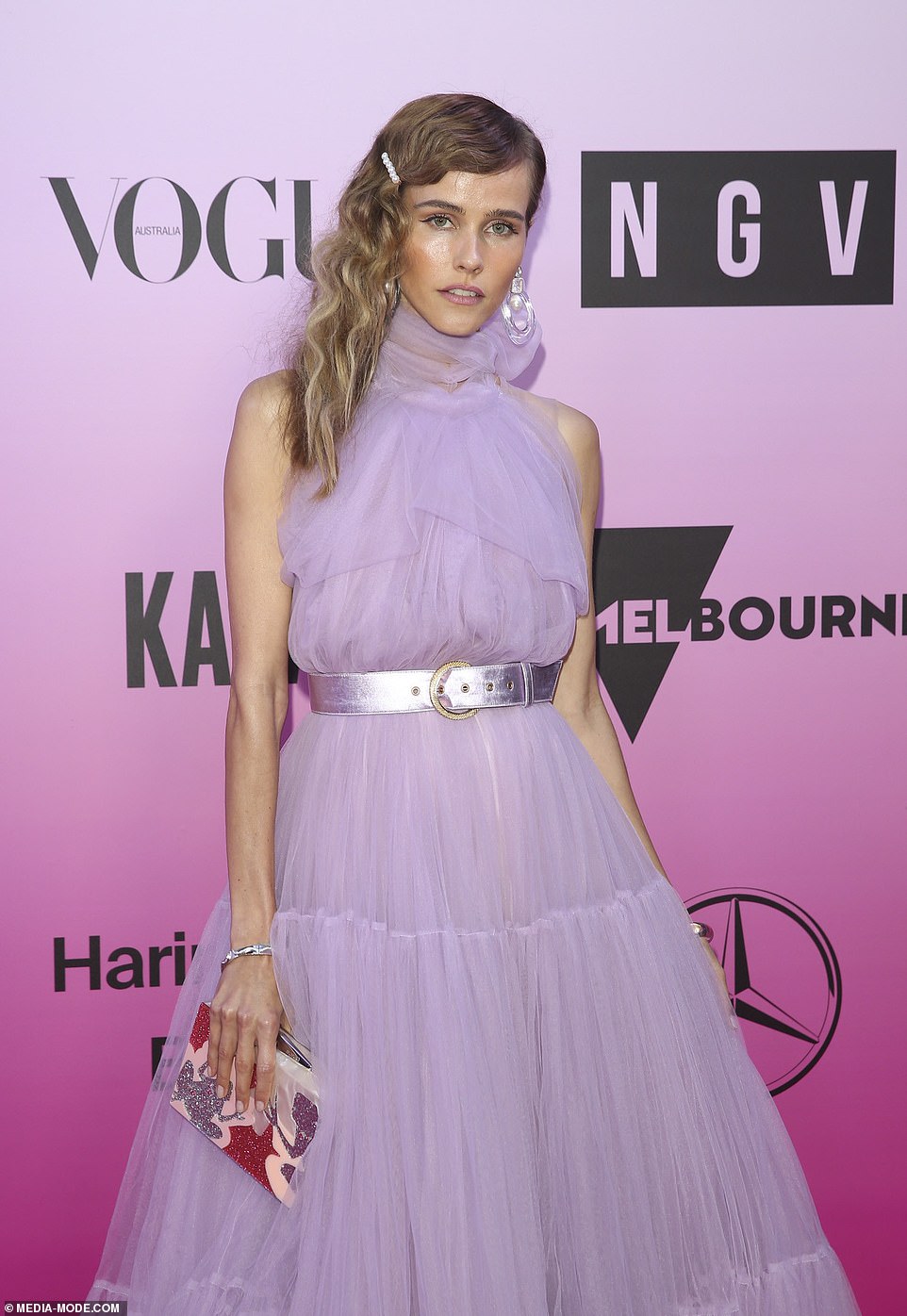 Lucas said that at the beginning of the pandemic in March, she was asked by her local council to film a video calling on locals to stay at home to stop the spread of the virus. During the Zoom chat, she said she regretted appearing in the clip

Lucas has previously clarified that her qualms lie solely with ‘mandatory vaccination’, rather than immunisation on its own.

She has also expressed her distrust of mainstream media and reporting of the 5G telecommunications rollout, which she believes is harmful.

‘I choose to support the thousands of medical doctors and top EMF scientists around the world who have issued appeals for urgent action to stop 5G and protect public health,’ she said back in April.

‘My family raised me to believe that it’s wise to calmly question important topics in my community. Recently I’ve been saddened to witness friends being labeled or attacked for respectfully questioning and examining certain topics.

‘To clarify, I would never suggest COVID-19 is 5G related, (some have speculated). I’d like to support cohesive, clear, calm communication that welcomes healthy questioning.’

She compared the movement questioning the safety of 5G technology to the #MeToo movement for sexual harassment.

‘Why has it been proven that microwave radiation (EMF) is a powerful immune suppressant, harmful to humans, animals, plants – yet telco companies are installing the towers on top of schools, hospitals and near our homes… whilst we are in lockdown?’ she asked her followers.

In April, Lucas was dropped as an ambassador for Plan International Australia, a charity for girls’ rights, over her controversial comments on coronavirus vaccines and 5G technology

Who’s who in the anti-lockdown Zoom conference

Disgraced celebrity chef Pete Evans is one of the most outspoken members of the anti-vaxx movement within Australia.

He has repeatedly claimed the public is being ‘lied to’ about the COVID-19 pandemic and expressed distrust toward politicians and mainstream media.

He has also falsely suggested that vaccines are unsafe, and that jabs are somehow linked to autism in children.

Vaccinations are a simple, safe and effective way of protecting people against harmful diseases before they come into contact with them.

The Australian actress and activist has been vocal about her distrust of vaccinations.

She has faced criticism for her opinions but remained adamant that she just wants to help facilitate a discussion about matters that don’t necessarily conform with mainstream opinions.

Lucas is against the rollout of the 5G network and mandatory vaccinations.

Zev Freeman has been an avid campaigner for human rights, and outspoken in his disapproval of 5G technology.

He helped to block the installation of 5G technology in Byron Bay.

Teffaha is a lawyer who focuses on complex matters.

She is planning a class action against the Victorian Government over their ‘unlawful’ vaccine mandates and lockdown directives.

She said she has heard of countless scenarios where families are finding themselves in ‘unfathomable’ situations during the lockdown.

‘I’m blown away by what I’m witnessing… Forced vaccinations, elderly abuse in aged care facilities, people not being allowed to see their families at the moment of their death.

‘How many bullies are there do you have to mitigate? How many fires do you have to put out. This is a nation that is encouraged to bully each other. In an emergency you are saying that anything goes.’

Matt Lawson’s profile has raised significantly throughout the pandemic for his outspoken nature.

He is the administrator behind a popular anti 5G Facebook page and organised the Zoom conference.

Lawson reached out to several celebrities asking them to contribute to the conference.

In recent months, bizarre new conspiracy theories have circulated on social media claiming that 5G causes coronavirus by ‘sucking oxygen out of your lungs’.

These claims have been debunked by medical experts and technological experts.

In a lengthy statement, Lucas defended her right to freedom of speech and stressed the potential dangers of 5G.

‘Freedom of speech is a human right – is it a risk?’ she began.

‘If over 4,000 peer reviewed reports describe injuries from wireless and thousands of EMF scientists and medical doctors (and ex-Telco employees) around the world are reporting harmful biological effects from wireless radiation – these would be rational questions, wouldn’t they?’

The actress also asked fans to do their own independent research rather than only following information reported in the mainstream media.

Lucas was also slammed alongside surfer Taj Burrow for promoting alternative medicines as an answer to the COVID-19 pandemic in response to an Instagram post by controversial celebrity chef Pete Evans.

Lucas said she ‘didn’t trust the path of vaccination’ while Burrow, 41, claimed that vaccines are ‘not needed’ despite the coronavirus outbreak. 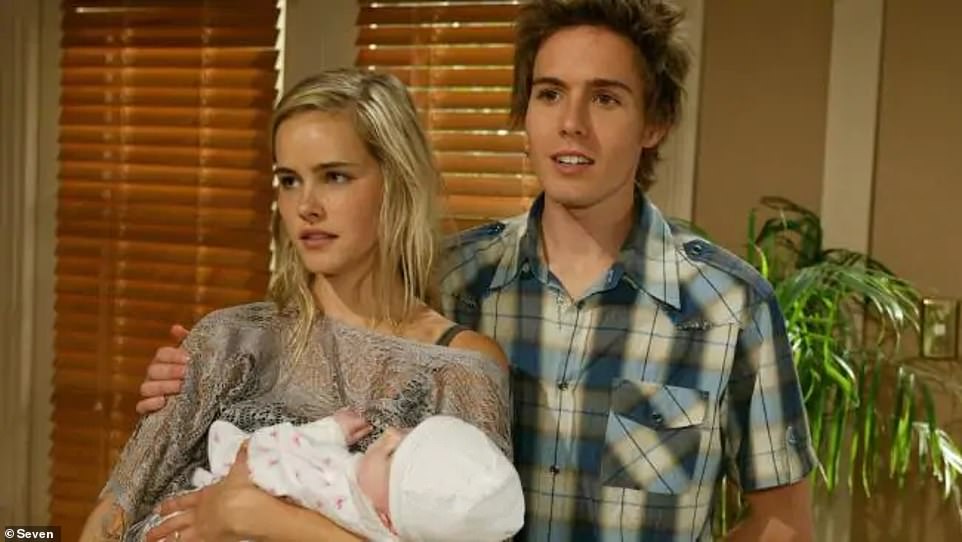