A mob of anti-mask protesters stunned grocery shoppers after storming a supermarket yelling 'You guys need to resist'.Members of group StandUp X walke

At least four people are stabbed near the former offices of Charlie Hebdo in Paris
The UK’s favourite walks to blow away the cobwebs from Buttermere to the Fife Coastal Path
Caffeine lovers are more likely to enjoy coffee in a quiet space, study claims

A mob of anti-mask protesters stunned grocery shoppers after storming a supermarket yelling ‘You guys need to resist’.

Members of group StandUp X walked into the Morrison’s store in Peckham, south London, to lecture people on wearing face coverings during the pandemic.

As shoppers harmlessly filling up their baskets looked on, the protesters walked through shouting that people should not submit to coronavirus rules.

And they told people buying food: ‘Your masks are so bad for you.’ 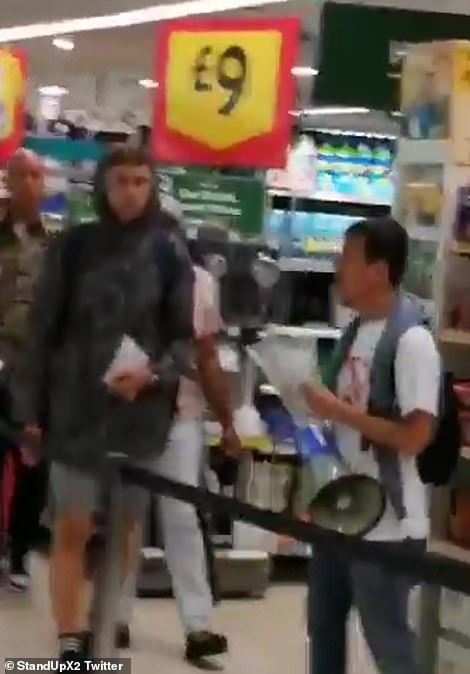 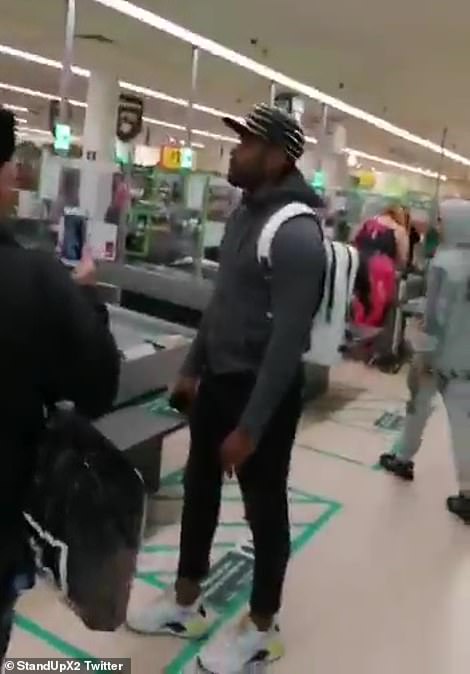 Members of group StandUp X walked into the supermarket in Peckham, south London, to lecture people on wearing masks

One shouted: ‘You are conditioned to believe everything the government tells you.

‘Resist the new world order guys. How many people die from the flu every year? 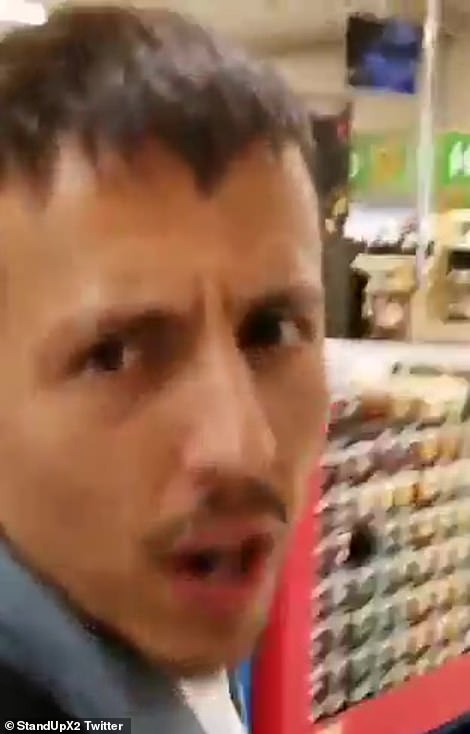 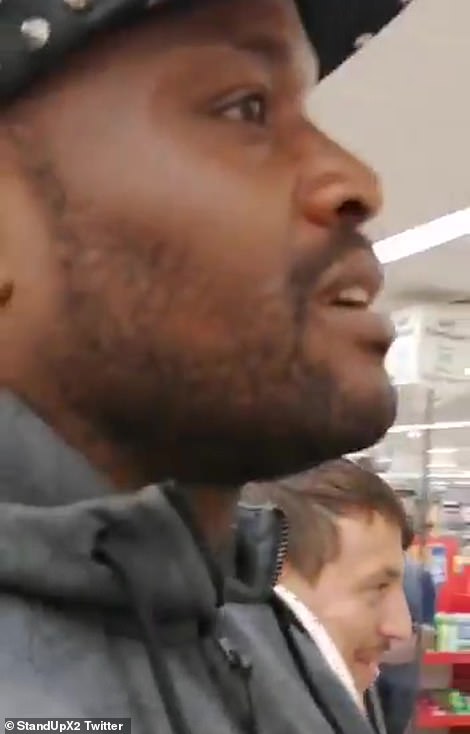 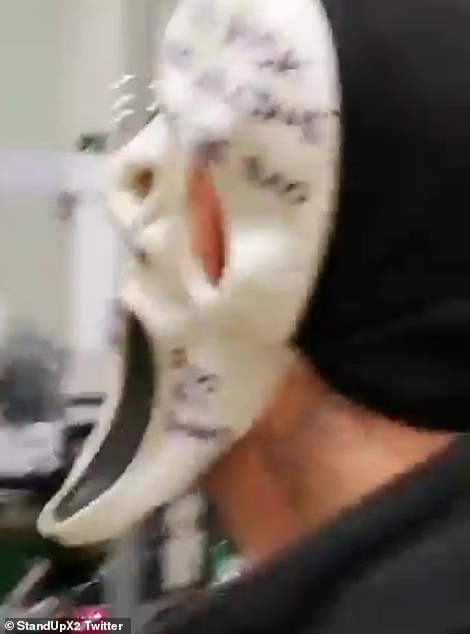 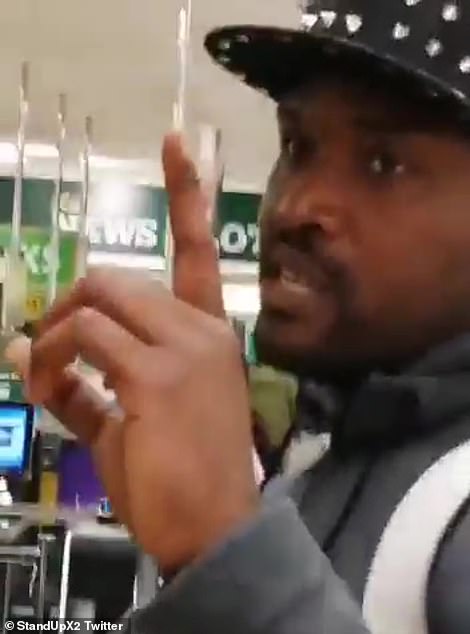 Bizarrely for an anti-mask protest, one campaigner was seen wearing one on his face, similar to the type in the Scream films

So, has the science evolved on face coverings?

A report by the Royal Society suggests basic homemade face coverings can reduce transmission if enough people wear them.

Dr Julian Tang, who is an associate professor of respiratory sciences at the University of Leicester, said wearing face coverings in public places could keep the R value below 1 by creating an ‘artificial herd immunity’.

Are there any benefits to wearing them?

Experts say the risk of coronavirus transmission appears to be higher in poorly ventilated indoor spaces and wearing face coverings in small shops or enclosed shopping centres could help reduce the spread.

In addition, there is also increased evidence which suggests that many people with the virus who do not have symptoms can still be contagious.

What does this mean for those looking to go back to the office?

Experts say wearing face coverings could provide an added line of defence amid growing evidence of airborne transmission of coronavirus.

Dr Tang said: ‘If half the people in the office wear a mask, it would increase artificial herd immunity to around 25 per cent, which can reduce transmission overall within the office, just by reducing the number of people who are susceptible.’

Are there downsides to face coverings?

There are many indoor spaces, such as pubs and restaurants, where the use of face coverings cannot be possible while eating and drinking.

Some experts have also shared concerns that wearing face coverings may give the wearer a false sense of security, although Prof Neal said there is ‘no evidence to suggest that is the case’.

Deputy Chief Medical Officer Professor Jonathan Van Tam said in April: ‘There is no evidence that general wearing of face masks by the public who are well, effects the spread of the disease in our society.’

At around the same time, Dr Jenny Harries, a Deputy Chief Medical Officer, said masks could ‘actually trap the virus’, and cause the person wearing it to breathe it in. She explained: ‘For the average member of the public walking down a street, it is not a good idea.’

Are some face coverings better than others?

The Government said coverings can be made from scarves, bandanas or other fabric items, as long as they cover the mouth and nose.

But scientists at the Leverhulme Centre say some coverings are not as effective as others, with woven fabrics, such as scarves, shown to be least effective.

‘You are not asking any questions. You are just wearing a mask because they tell you to wear a mask. Do some research.’

StandUp x describe themselves as a group that is ‘peacefully questioning the narrative.’

They believe the new lockdown rules are a state of ‘authoritarian control’ and say they do not consent to social distancing measures.

Their website says: ‘We do not consent to Government social distancing measures infringing upon public and private life.

They also question the need for 5G and various other government and charitable ventures.

As shoppers watched them walk through the store chanting, video footage shows none were wearing masks.

In contrast, many of those buying food were adhering to guidelines put in place by PM Boris Johnson to reduce the spread of the virus.

One protester handed out leaflets, while another shouted: ‘Don’t let the government lie to you no more!’

The video was posted on the group’s Twitter account, alongside the cation: ‘On our London protest in Peckham Rye yesterday we took a detour to Morrisons to wake up the shoppers #londonprotest #peckhamrye #morrisons #nomasks #awake #HumanRights #freedom #covid #Police #media #Plandemic #Plandemic2020.’

It followed a series or organised marches across Britain protesting about the coronavirus rules.

Rallies have been held in Brighton, Sheffield and London and one will also take place this Saturday in Shoreditch.

At the Brighton march at the weekend, a member of the group said it had a pro-freedom and anti-lockdown stance and that its aim was to ‘save our rights’.

Last month hundreds of activists descended on Hyde Park in central London to protest the wearing of face coverings, ahead of them becoming compulsory in shops and supermarkets.

Signs reading ‘I will not be masked, tested, tracked’ and ‘no mask’ were heald aloft by demonstrators after they gathered for the Keep Britain Free march.

The movement was founded by Simon Dolan, an aviation tycoon worth around £200million, who earlier this month lost a High Court bid to overturn the government’s lockdown rules.

He had launched the campaign on July 6, saying: ‘I believe in freedom of choice for all and the protection of personal liberties. The Government’s actions are crippling the economy, denying children education, and trampling over human rights.’

One man wore a plague doctor costume, another had a mask with the front ripped out and one donned a vest saying: ‘Save human rights. No to 5G. No to vaccinations.’

The protest was to counter the government announcement that masks must be worn in shops from July 24, which organisers branded a ‘liberty-sapping regulation’. 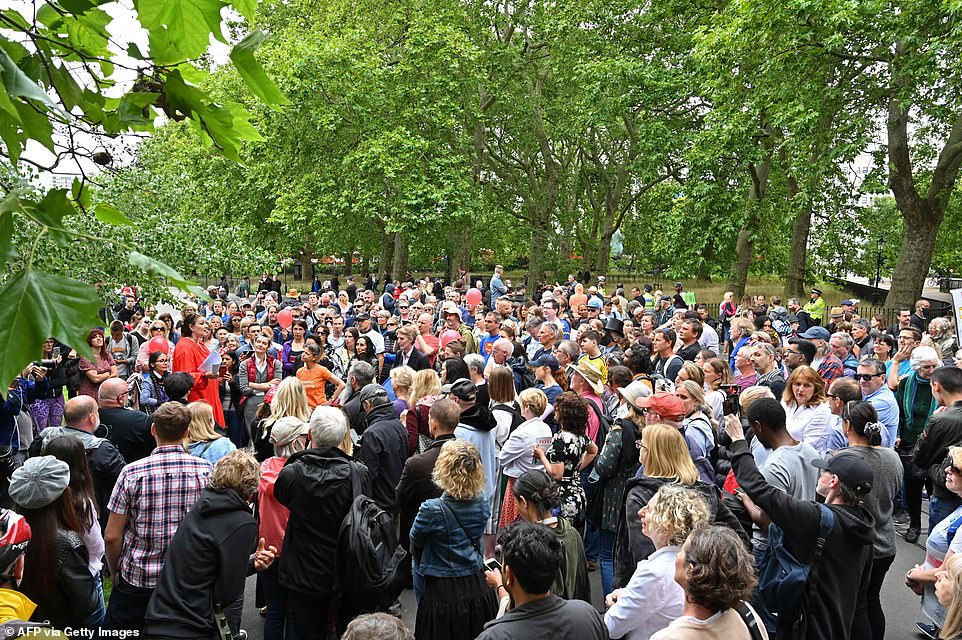 The march, which started in Speaker’s Corner and moved to Marble Arch, also looked to repel ‘the erosion of freedoms in the UK’ brought in during lockdown.

A Devon woman Lara Crabb has also become a face of the anti-mask movement.

She posted videos of herself online proudly going into shops without the face coverings.

Crabb, who is linked to Keep Britain Free, wrote on Twitter earlier this month she had been told off by one shop for not wearing the protection.

She fumed: ‘I spend a lot of money in your stores.

‘I don’t expect to be mask “shamed” by your staff. That happened yesterday in your Dartmouth branch.

‘Suggest you speak to them about their conduct. I will not ever wear a mask.’

Facebook user Aron Walton filmed himself walking around a Sainsbury’s store with a grin on his face as he then asked a member of staff ‘what’s the policy’ before telling him the rule cannot be enforced.

Twitter account ‘Mr. Grunt’ recorded video of the moment he approached a Boots store and asked the masked guard if he could enter, to which the guard replied ‘yes, there are masks back there’.

In the video, which was posted online with the caption ‘Well done @BootsUK! #NoMasks’, the man says ‘I can’t wear a mask, is that ok’ before the masked guard responds ‘yeah, that’s ok’.

And in London, Facebook user Reis Daniel says ‘f*** it, I’m going in’ before he is told by a member of Sainsbury’s staff that he is not allowed in the store without a covering.

Mr Daniel responds ‘man, that’s rough’ before he snatches a bag of sweets by the check-out counter without paying for them and sprinting out of the store laughing.

Morrisons have been approached for comment following the protest, which took place on July 25.