An astonishing 97.6 million ballots have already been submitted through in-person early voting and by mail, which is over two-thirds of the 2016 election’s total number of votes cast.

The total turnout for the election on Tuesday is set to smash the record set in 2016, when nearly 139 million people cast their vote.

Americans on Tuesday decide between President Donald Trump and Democrat Joe Biden, selecting a leader to steer a nation battered by a surging pandemic that has killed more than 230,000 people, cost millions their jobs and reshaped daily life. 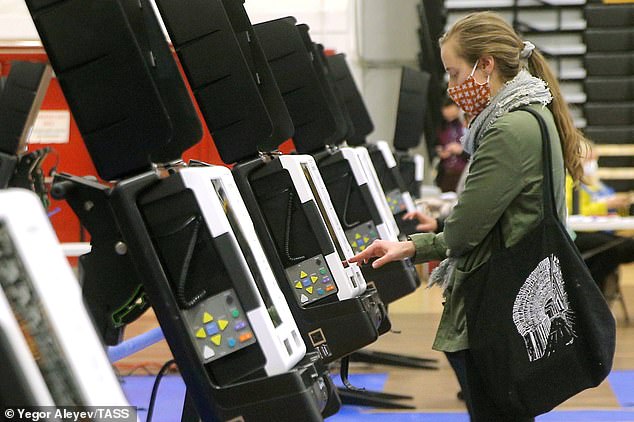 Super Vote Center at the University of the District of Columbia (UDC) during early voting in the 2020 US presidential election on November 2. An astonishing 97.6 million ballots have already been submitted through in-person early voting and by mail 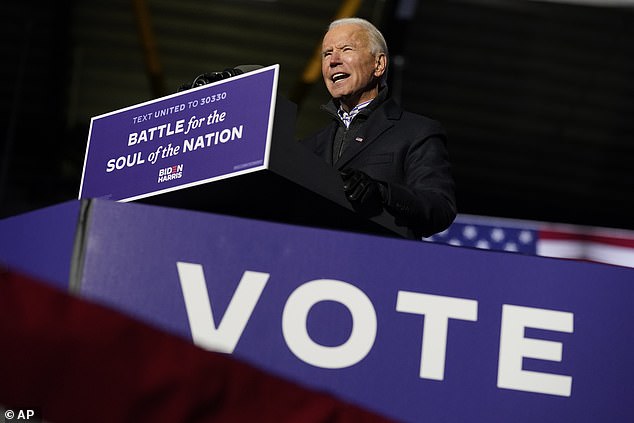 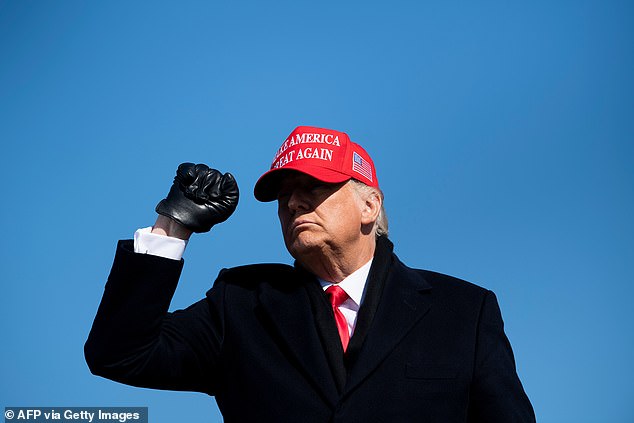 Texas and Hawaii have already surpassed their total 2016 voter turnout.

Meanwhile, the battleground states of North Carolina, Georgia and Florida have topped 90 percent of their 2016 turnout.

Voters braved long lines and the threat of the virus to cast ballots as they chose between two starkly different visions of America for the next four years.

The record-setting early vote – and legal skirmishing over how it will be counted – drew unsupported allegations of fraud from Trump, who refused to guarantee he would honor the election’s result.

Fighting to the end for every vote, Biden was headed to Philadelphia and his native Scranton on Tuesday as part of a closing get-out-the-vote effort before awaiting election results in his hometown of Wilmington, Delaware. His running mate, Sen. Kamala Harris, was visiting Detroit, a heavily Black city in battleground Michigan. Both of their spouses were headed out, too, as the Democrats reached for a clear victory.

Trump, after a morning appearance on his favored network, Fox News, planned to visit his campaign headquarters in Virginia. He invited hundreds of supporters to an election-night party in the East Room of the White House.

The hardfought campaign left voters on both sides eager to move on. 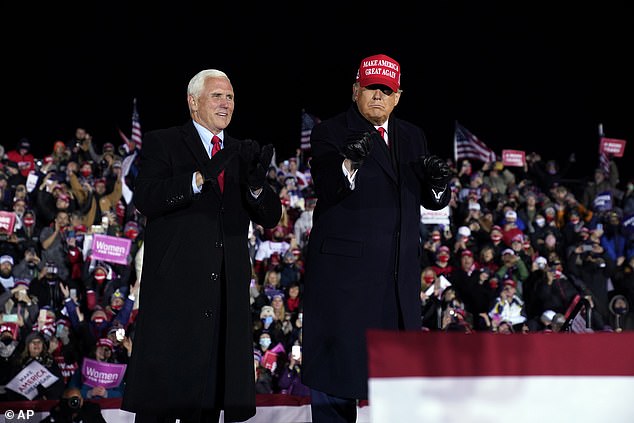 ‘I just want it to be done,’ said Starlet Holden, a 26-year-old medical biller from Queens, New York, who planned to vote for Biden but spoke for many on both sides of the campaign.

On their final full day on the campaign trail, Trump and Biden broke sharply over the mechanics of the vote itself while visiting the most fiercely contested battleground, Pennsylvania.

The president threatened legal action to block the counting of ballots received after Election Day. If Pennsylvania ballot counting takes several days, as is allowed, Trump claimed without evidence that ‘cheating can happen like you have never seen.’

In fact, there are roughly 20 states that allow mail-in ballots received after Election Day to be counted – up to nine days and longer in some states. Litigation has centered on just a few where states have made changes in large part due to the coronavirus.

Biden told voters in Pennsylvania that the very fabric of the nation was at stake and offered his own election as the firmest rebuke possible to a president whom he said had spent ‘four years dividing us at every turn.’

‘Tomorrow’s the beginning of a new day. Tomorrow we can put an end to a president that’s left hardworking Americans out in the cold!’ Biden said in Pittsburgh. ‘If you elect me as president, I’m gonna act to heal this country.’

Trump argued, at a stop in Wisconsin, that Biden was ‘not what our country needs.’ He added: ‘This isn’t about – yeah, it is about me, I guess, when you think about it.’

For Trump, the election stood as a judgment on his four years in office, a term in which he bent Washington to his will, challenged faith in its institutions and changed how America was viewed across the globe. In a country divided along lines of race and class, he often acted as an insurgent against the very government he led, undercutting its scientists and bureaucracy and doing battle with the media.

The nation braced for what was to come – and a result that might not be known for days. 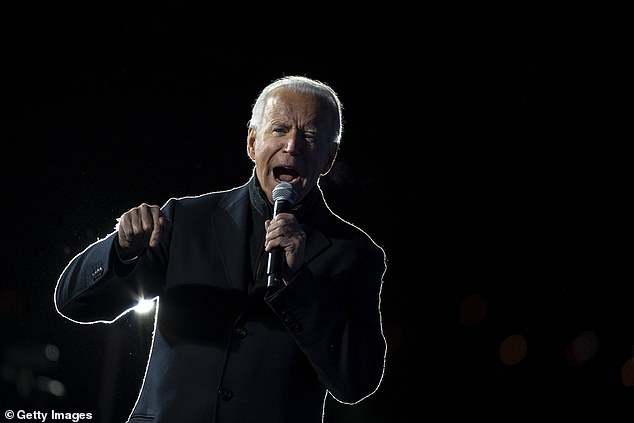 A new anti-scale fence was erected around the White House. And in downtowns ranging from New York to Denver to Minneapolis, workers boarded up businesses lest the vote lead to unrest of the sort that broke out earlier this year amid protests over racial inequality.

Just a short walk from the White House, for block after block, stores had their windows and doors covered. Some kept just a front door open, hoping to attract a little business.

Both candidates voted early, but first lady Melania Trump was set to cast her ballot Tuesday near Mar-a-Lago, the couple’s estate in Palm Beach, Florida.

The candidates blitzed through the battleground states on Monday, with Biden also pushing into Ohio, a state once thought to be safe for Trump. The president, for his part, packed in five rallies, Air Force One streaking across the sky as he drew crowds in North Carolina, Pennsylvania, Michigan, Wisconsin and then back in Michigan again.

His finale stretched past midnight in Grand Rapids, where he had also held his last rally in 2016. It marked the end of an era in American politics, one in part defined by the massive and exuberant gatherings that the president continued to hold despite warnings from his government’s own public health experts to avoid crowds during the pandemic.

The next president will inherit an anxious nation, reeling from a once-in-a-century heath crisis that has closed schools and businesses and that is worsening as the weather turns cold.

Trump in Grand Rapids insisted anew that the nation was ’rounding the turn’ on the virus. But Dr. Deborah Birx, the coordinator of the White House coronavirus task force, broke with the president and joined a chorus of Trump administration scientists sounding alarm about the current spike in infections.

‘We are entering the most concerning and most deadly phase of this pandemic,’ Birx wrote in a memo distributed to top administration officials. She added that the nation was not implementing ‘balanced’ measures needed to slow the spread of the virus. One recipient confirmed the contents that were initially reported Monday by The Washington Post.

The pandemic has shadowed the campaign, which has largely been a referendum of Trump’s handling of the virus.

In Concord, New Hampshire, 70-year-old Linda Eastman said she was giving her vote to Trump, saying, ‘Maybe he wasn’t perfect with the coronavirus, but I think he did the best that he could with what he had.’

In Virginia Beach, it was a vote for Biden from 54-year-old Gabriella Cochrane, who said she thought the former vice president would ‘surround himself with the brightest and the best’ to fight the pandemic.

The challenge of counting a record-setting early vote added a layer of uncertainty to an election marked by suspicions fueled by an incumbent who has consistently trailed in the polls. 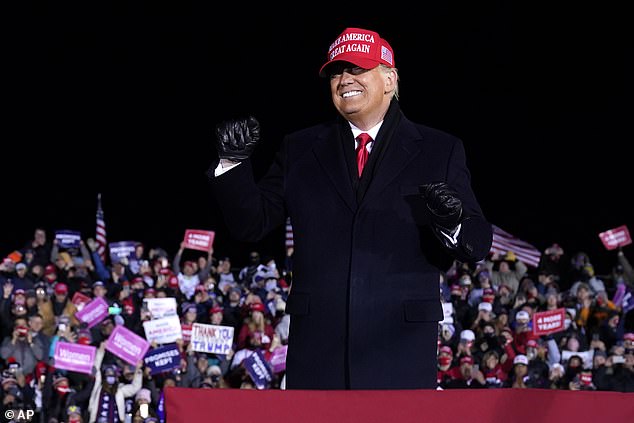 Trump, in Pennsylvania, zeroed in on the state’s process to count mail-in votes that arrive after Election Day, vowing that ‘we’re going in with our lawyers’ as soon as the polls close. He tweeted – without evidence – that ‘violence in the street’ could follow the Supreme Court’s decision to grant an extension to count the votes arriving after Tuesday.

Trump offered himself to voters as the same outsider he first pitched to voters four years ago, insisting he’s still not a politician. Presenting himself as the last barrier protecting an American way of life under siege from radical forces, he repeatedly tried to portray Biden, who is considered a moderate Democrat, as a tool of extreme leftists.

Biden, for his part, cast Trump was an incompetent leader in a time of crisis, trying to connect what he saw as the president’s failures in containing the virus and on other matters to the everyday lives of Americans.

Loading...
Newer Post
Tour operators record 10,000 bookings in a day as Britons scramble to airports before lockdown 2.0
Older Post
The AA reveals its new restaurant Rosette and hotel Red Star winners, from The Ritz to The Pig