An Ohio Air Force veteran used biodegradable paint to transform his entire yard into a Trump 2020 banner ahead of the November election – earning praise from the President himself.

J.R. Majewski, of Port Clinton, used around 120 gallons of paint to create a 19,000-square-foot banner to cover his long, triangular front yard of of his Bay Township home.

This isn’t the first time the yard was restyled Majewski, who last July painted a massive American flag in his yard to honor patriotism and  his fellow military veterans. 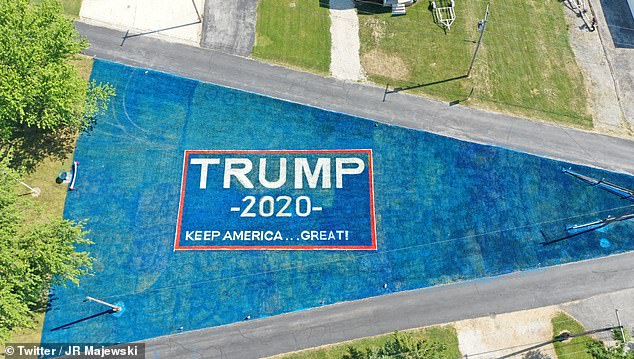 J.R. Majewski, of Port Clinton, Ohio, painted a massive Trump 2020 banner on his front lawn in support of the President ahead of the upcoming election 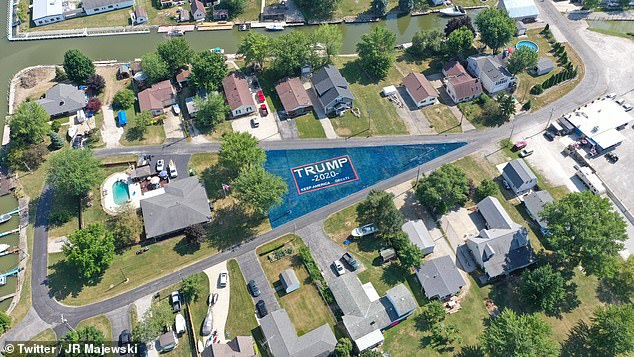 Majewski said he used around 120 gallons of biodegradable, chalk-based paint to create the 19,000-square-foot banner 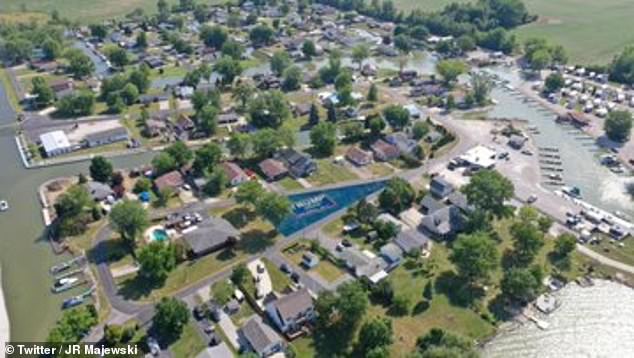 But this year he wanted to focus on President Donald Trump.

Photos of Majewski’s lawn show the near entirety of his lawn has been painted dark blue with the phrase ‘Trump 2020 Keep America …  Great!’

An aerial view shows the blue banner as a splash of color compared to his neighbor’s green plots.

He used biodegradable, chalk-based paint to avoid harming his yard and then environment. 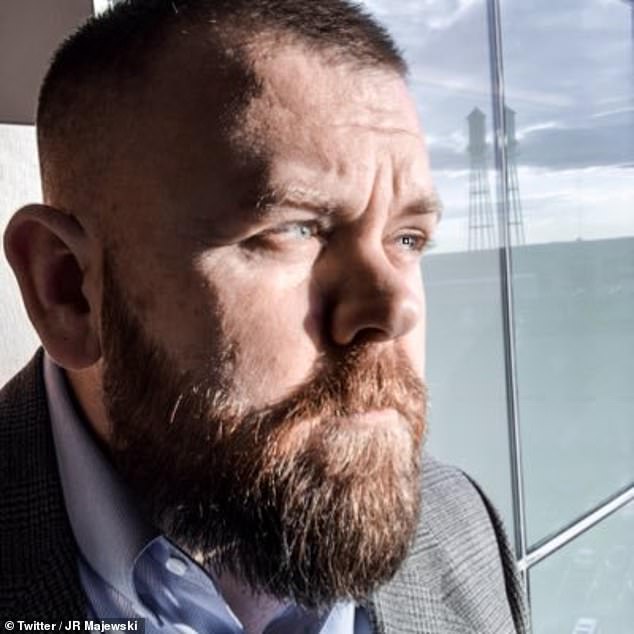 J.R. Majewski (pictured) is an Air Force veteran who served in Afghanistan and now resides in Bay Township, Michigan 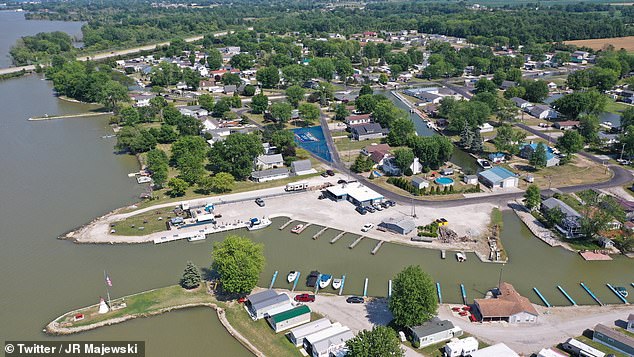 The space was initially going to be a National League of Families POW/MIA flag, but he chaged his mind after talking to his fellow veterans 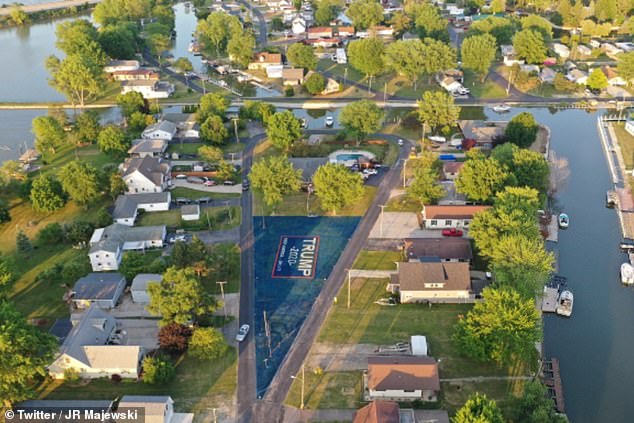 Several neighbors and a state official have stopped by to see the display, which Majewski said has garnered positive feedback

Initially, Majewski told Port Clinton News Herald that he planned to paint the National League of Families POW/MIA flag, but discovered  there could be problems with the amount of black paint needed.

The inspiration to create a campaign-like Trump banner sparked after speaking with other members of a local veterans group, many of which are Trump supporters.

‘You see and hear a lot from the president on his support of the military. New weapons, new equipment, new technology — all of those things matter,’ said Majewski.

‘I think as a veteran, it’s highly appreciated.’ 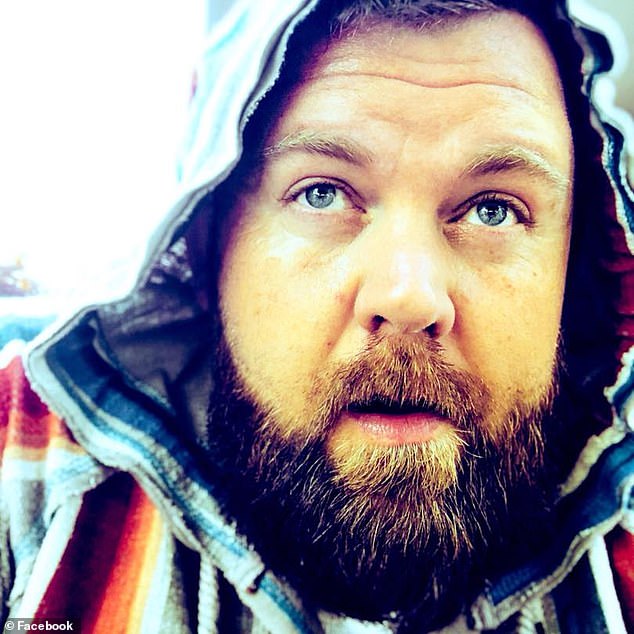 Majewski: ‘You see and hear a lot from the president on his support of the military. New weapons, new equipment, new technology — all of those things matter’

Majewski, who served in Afghanistan, said he remembers going more than 40 days without a shower because they had no access to running water.

Since the banner was completed, Majewski said he’s received overwhelmingly positive and even got a shout out from Trump.

‘Thank you to J.R. Majewski, a great Air Force Veteran and Trump Supporter who did a beautiful job of turning his lawn into a giant Trump Sign,’ Trump wrote on Sunday morning,

‘Thanks also to your fantastic Ohio neighbors. We are making record progress on JOBS, etc. Big Silent Majority!!!’

He’s also heard support from the Ottawa County Republican Party and Rep. Douglas Swearingen of District 89, who visited the mural.

Majewski was also featured on Fox & Friends ‘Shot of the Morning’ segment where he showed off the banner.

‘I think he’s going through a lot right now, trouble s and turmoils right now, and a lot of people like myself out here supporting him,’ he told the station.

‘And we’ve been silent, but it’s about time we voice our support.

Majewski said that several of his neighbors have stopped by and he’s received ‘a lot of positive feedback.’

He also placed a few signs around the banner saying that he can still be friends with people on the other end of the political spectrum.

‘YES I support TRUMP and YES we can still be friends even if you don’t,’ one sign read. 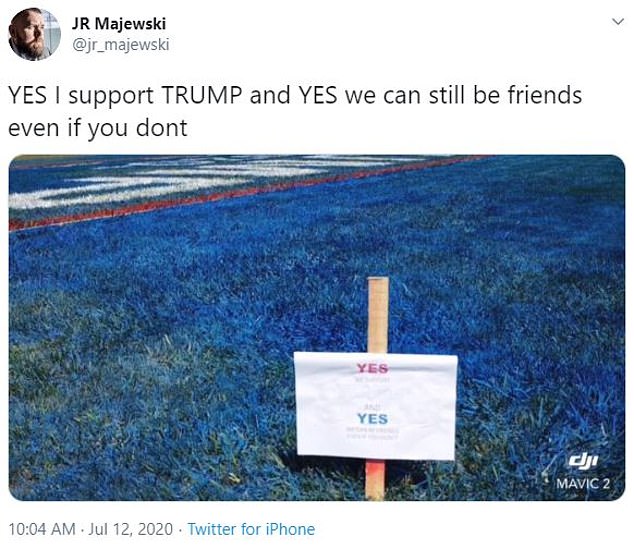 Majewski: ‘YES I support TRUMP and YES we can still be friends even if you don’t’ 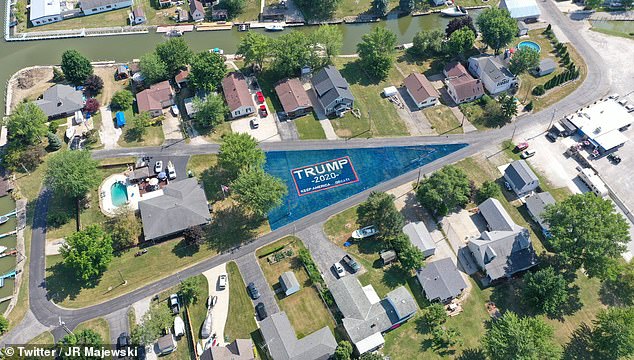 ‘We do not have to be vicious to one another, that’s what’s dividing us right now,’ siad Majewski.

‘Not that I wanted it, but I did anticipate a little bit more friction, but there has been absolutely none.’

Majewski created a GoFundMe on Saturday to keep the Trump banner on his lawn through the November election.

‘I would like to maintain the TRUMP Flag through November but the costs are be too substantial for me as an individual,’ he wrote.

‘Donated funding would be used to purchase of environmentally friendly, non-VOC, organic field paint, application of the paint, and lawn maintenance of the flag.’