SEBASTIAN SHAKESPEARE: Lord Bragg goes back in time for tale of privations in his new book

He has a peerage to his name and lives in splendour in a £5million house in Hampstead, the leafy enclave favoured by the north London intelligentsia.

But broadcasting and literary grandee Melvyn Bragg has never forgotten, still less attempted to disguise, his earliest years in Wigton, Cumbria, when he and his parents lived in a ‘one-up, one-down’ terrace house — with an outside toilet and outside taps.

Now I can disclose that those years are to be at the heart of the book which Bragg, 80, has embarked on during lockdown. 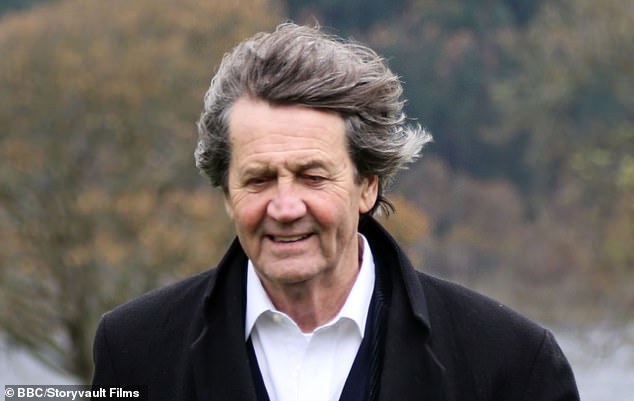 Broadcasting and literary grandee Melvyn Bragg has never forgotten, still less attempted to disguise, his earliest years in Wigton, Cumbria, when he and his parents lived in a ‘one-up, one-down’ terrace house — with an outside toilet and outside taps

‘It will,’ says a friend, ‘be as much about the north-west of England in the years of austerity and rationing of the late 1940s and early 1950s as it will be a conventional memoir.’

Bragg, most popularly known as host of The South Bank Show and, latterly, of Radio 4’s In Our Time, confirms he is hard at work.

‘I’m writing something about my early childhood, yes, that’s true,’ he tells me.

‘I don’t really think it’s a memoir — it’s a description of the town and the sort of people I grew up with.’

The Bragg family circumstances improved somewhat when his father became landlord of the Black-a-Moor pub. 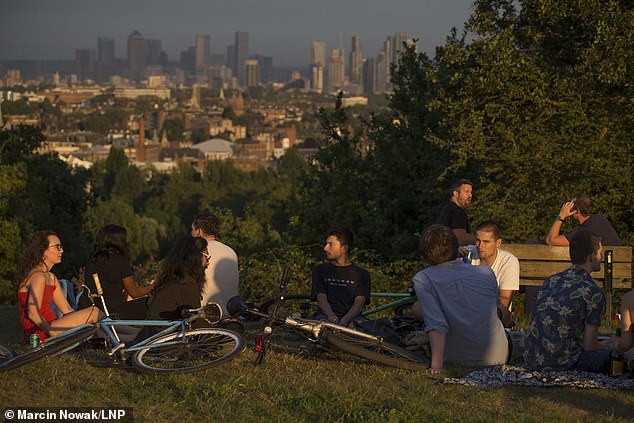 He has a peerage to his name and lives in splendour in a £5million house in Hampstead, the leafy enclave favoured by the north London intelligentsia. Hampstead Heath is pictured above

But, even then, the town and the lives of its inhabitants would have seemed impoverished to those born in 21st-century Britain, Bragg reflected last year, shortly before he married for a third time.

Bragg’s life soon became markedly more comfortable. After graduating from Oxford, he worked for the BBC and, later, London Weekend Television, in which he had a stake worth more than £2million when it was taken over in the 1990s.

He asks those eager to hear more about the privations of his youth to be patient.

‘It isn’t destined for anything but my desk for quite a long time,’ he assures me. ‘I got shingles at the start of lockdown which put paid to quite a bit of it. It lingers for quite a while. A nasty thing.’ 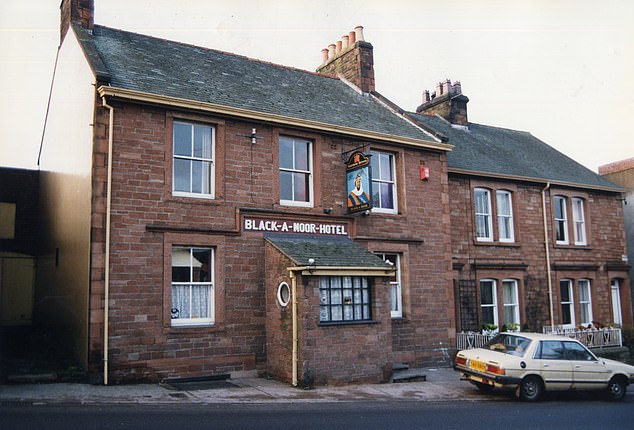 ‘I live next door to Ronnie,’ says the singer, who lives in north west London.

‘His twins said to me over the garden wall: ‘Lulu, maybe when the virus is over we can come and visit you in your house?’ I said: ‘Do you know what, you can come into my garden.’

‘So I’ve got a little tea party planned with them. We all need to see each other, because then we see people’s expressions.’

Anything mummy can do… Cindy Crawford’s daughter Kaia Gerber has become one of the world’s most sought-after models.

Now she is following in her mother’s footsteps again by having a pair of trousers named after her — the Kaia Pant.

The 18-year-old reveals the American label, Bleusalt, whose founder happens to be a family friend, has designed the fashion item for her — just three years after it did the same for Cindy, 54.

Sharing a picture online of herself wearing the £100 sustainably-made item, Kaia admits: ‘I’ve lived in these pants all of quarantine.’

She adds: ‘Twenty per cent of proceeds from each pant will be donated to A Sense Of Home, which works to prevent homelessness by creating homes for people who have aged out of the foster care system.’ 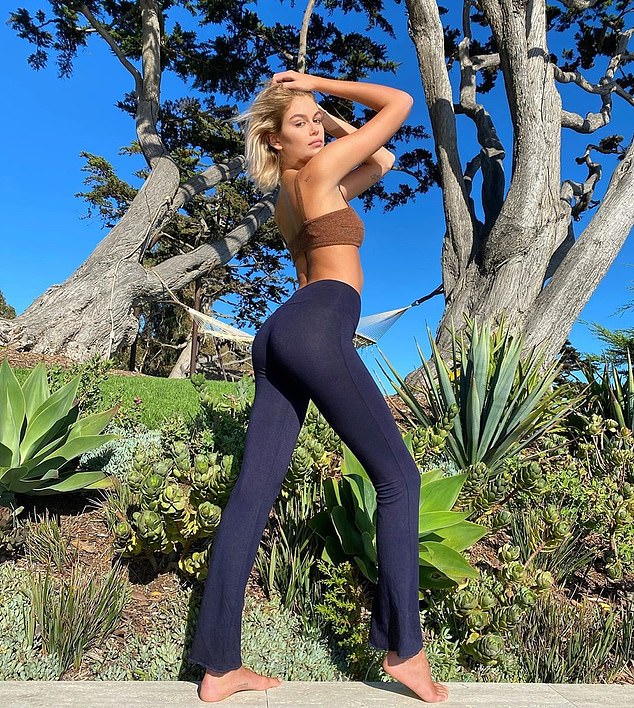 Kilimanjaro is a peak too far for Boris’s dad

In his youth he travelled from Oxford to Afghanistan and, only three years ago, he formed what he called ‘a deep and special relationship’ with Georgia ‘Toff’ Toffolo while sweating it out in the jungle in I’m A Celebrity…

But Stanley Johnson’s hopes of doing something manly out in the open on his 80th birthday have fallen victim to current foreign travel restrictions.

‘I was going to climb Mount Kilimanjaro for a third time,’ the PM’s father tells me from his Devon farmhouse.

‘I climbed it the first time to raise money for The Gorilla Organization. The second time, I raised money for my old Oxford college, Exeter College.

‘I had plans to have a third crack at it on my 80th,’ adds Stanley, who reaches the milestone next Tuesday. But, with travel to Tanzania ruled out, he envisages a low-key celebration — ‘very quiet, surrounded here by sheep and cattle’.

Surely the Prime Minister could invite him to Chequers, his country residence — and ‘Toff’, too? She could help Stanley through the hoops during an afternoon’s croquet.

The Dynasty star was inundated with compliments when she shared a picture of herself holding a book and wearing a stripey bandeau top and bikini bottoms.

‘I love reading — it’s one of my favourite pastimes,’ says Dame Joan, in St Tropez with her fifth husband, theatre director Percy Gibson.

Seeking the shade, Joan has admitted she avoids direct sunlight. ‘The second I went to Hollywood, I met my mentor who told me I’d be a crocodile if I carried on sitting in the sun.’ 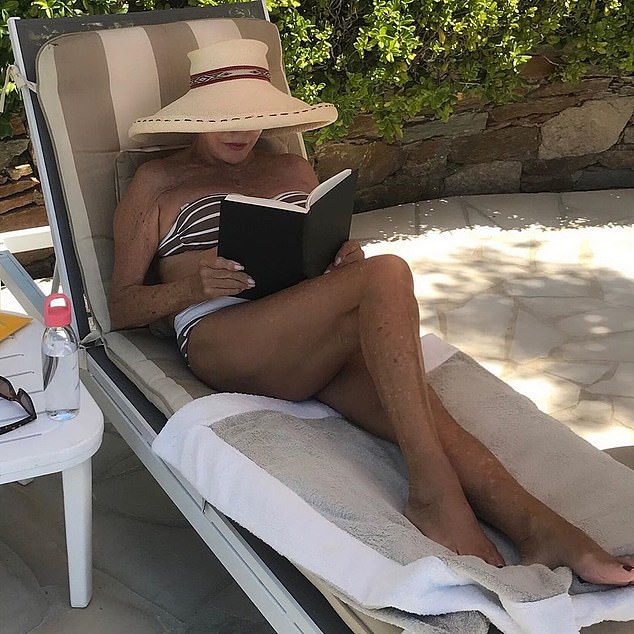 It’s not the end, says Cleese

John Cleese, who turns 81 in October, is somewhat focused on the hereafter. ‘My private project, which I haven’t told anyone about, [is] I think there is life after death,’ says the Fawlty Towers star.

‘I don’t know anything in detail, but I’ve seen enough evidence that something goes on, certainly for some people, after they die.’

He cites the writings of Professor Bruce Greyson, an expert in the field of near-death experiences, as a major influence on his views.

Adds Cleese: ‘You begin to realise it may be that consciousness is not produced by the brain. The brain is like a transmitter. It picks stuff up like a television set; the programme’s not made inside the set.’

Ben Fogle has made the most of the current travel restrictions. ‘I usually pack my bags and head off to the wilderness; this time I didn’t pack my bags and closed the door,’ says the TV presenter.

‘We moved from London to the Chilterns, so we were fortunate to have access to rural spaces and a vegetable patch.’

Even Sir Paul McCartney finds it hard to get down with the kids. ‘My family do Instagram,’ says the ex Beatle, ‘and I say, “I can’t believe you’re doing this, because every time you post, you’ve got to think of something clever to say.” It’s the worst pressure on earth.

‘All you’re doing is taking a picture of your breakfast, yet you’ve got to say “Pancakes are not just for Shrove Tuesday”. For me, that is not fun.’

Frankie and mum a couple of pink ladies 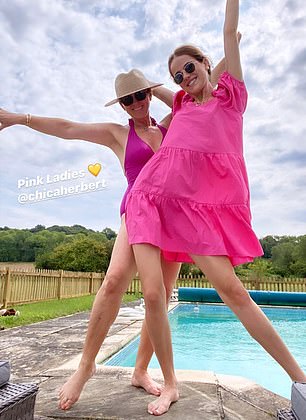 Frankie shared a picture of herself in a bright pink dress, with Chica, 57, sporting a similarly coloured swimsuit behind her by the pool

Society model Frankie Herbert has been making the most of family time now that she has fewer parties and fashion shows in her diary.

The 24-year-old Londoner, who made her catwalk debut in front of the Queen, has been in the countryside with her mother, Chica, whose marriage to racing manager Harry Herbert ended three years ago.

The duo have been so close that they’ve started dressing alike.

Frankie shared a picture of herself in a bright pink dress, with Chica, 57, sporting a similarly coloured swimsuit behind her by the pool.

‘Pink ladies,’ she captioned it with a love heart emoji.