A teenager in Portland charged with arson over the bombing of a federal courthouse was arrested after his grandmother tipped off police.

Gabriel Agard-Berryhill, 18, appeared in court in the Oregon city on Friday, and faces up to 20 years in prison if convicted.

He was arrested after his Trump-supporting grandmother Karla Fox saw footage of Tuesday night’s attack, and tweeted that her grandson was behind it. She had bought him the vest he was wearing during the attack.

‘This is my only grandson, I love him to death, and didn’t know he was going to do such a bad thing, I had been posting several things about the antifa and BLM, he knows I am against those riots bigtime…he chose his poison,’ she tweeted, from the username @Trumpgirl2020.

Donald Trump has strongly condemned the Portland protests, which emerged after the May 25 killing of George Floyd and have worsened since Trump sent federal troops into the Democrat-controlled city. 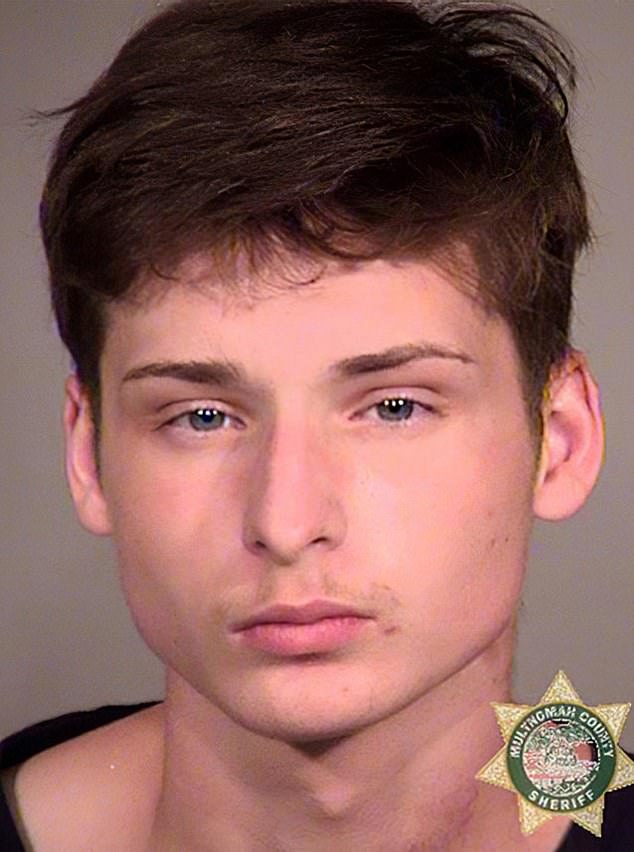 Gabriel Agard-Berryhill, 18, appeared in court in Portland on Friday charged with arson 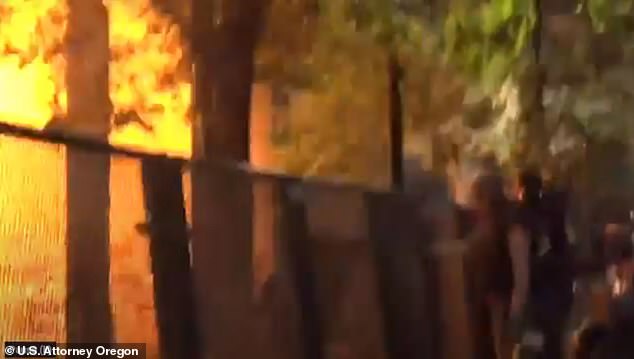 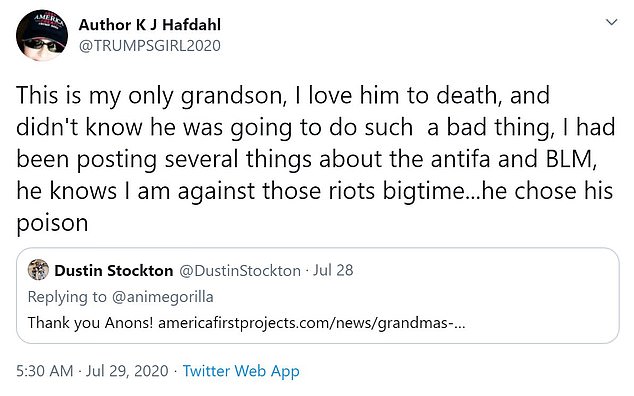 Agard-Berryhill was among protesters in Portland who resorted to violence on Tuesday night.

Footage on social media captured a loud bang and then flames emerging from the building.

Security cameras filmed the attack, which happened at approximately 11:50pm at the Hatfield Federal Courthouse.

A figure wearing a vest bearing the word ‘Icons’ threw a ‘large incendiary object,’ which entered the building’s portico area, prosecutors said, and landed near plywood sheeting affixed to the building’s facade. 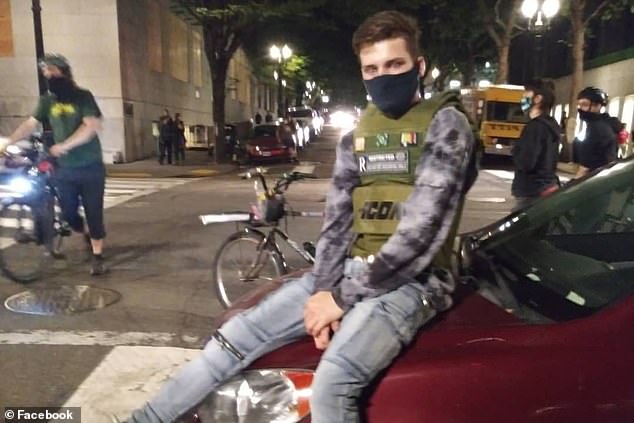 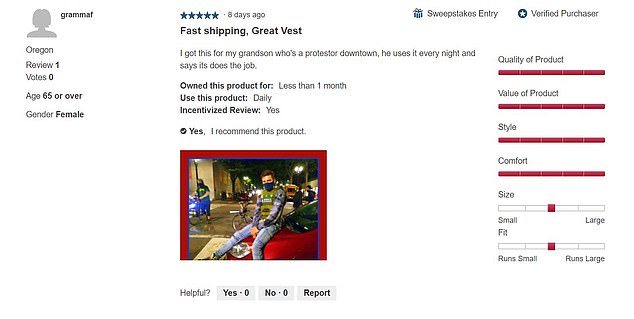 Fox wrote a review of the vest online, saying she bought it for her grandson who was happy

A few seconds later, the object exploded, igniting a fire near the building’s main entrance.

Police said the concussion could be ‘heard and felt more than a block away.’

The 12:11am explosion was so loud that even members in a private chatroom used to coordinate protest and riots expressed surprise.

‘Holy f*** that was the loudest explosion I’ve heard ever,’ wrote one.

‘I felt that in my f–king bones,’ wrote another.

Federal law enforcement personnel collected various items near the site of the explosion and sent them to a Bureau of Alcohol, Tobacco, Firearms, and Explosives (ATF) laboratory for further analysis.

Agard-Berryhill was identified by his vest; his grandmother’s tweet; and the review of the vest she posted online.

‘I got this for my grandson who’s a protestor downtown, he uses it every night and says its does the job,’ she wrote, posting a photo of Agard-Berryhill in his new vest and giving the clothing five stars.

Fox told the New York Post that she bought the $26 non-bulletproof vest to protect him.

‘I bought the vest for him after he found one online after getting hit with rubber bullets the night before at the protest,’ she said.

She said her grandson is currently on probation for a felony conviction when he was a minor.

She said he spent the past two years at Rogue Valley Youth Correctional Facility in southern Oregon and recently talked of turning his life around, and getting a job at Amazon.

Fox said that when she last saw her grandson, last week, he said that he was peacefully protesting and ‘protected a girl.’ 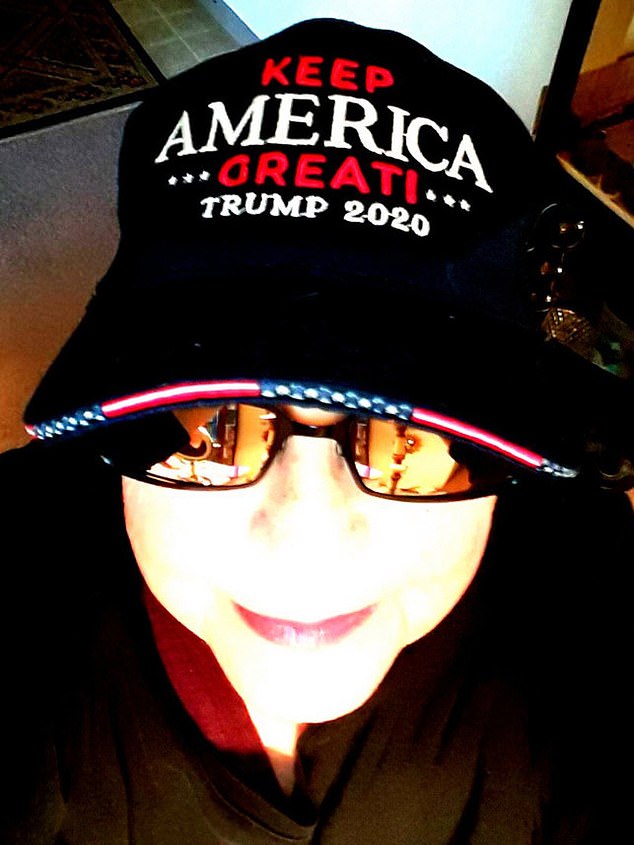 Karla Fox, the grandmother of Agard-Berryhill, identified her grandson as the attacker 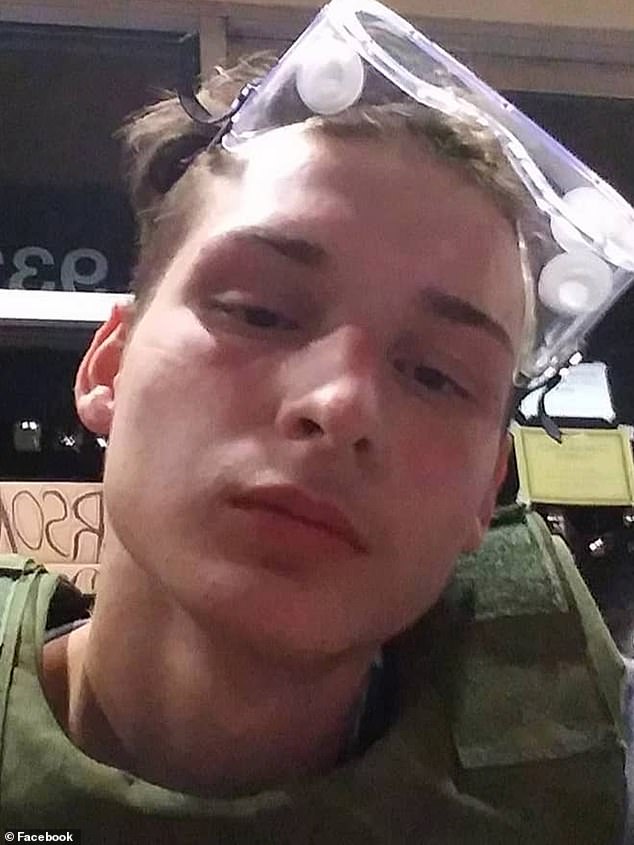 The teenager is currently on probation for a felony conviction when he was a minor, Fox said

A man in the same vest, identified as ‘Rico’ in the affidavit, appears in a viral July 18 video using a shield to protect a nude protester dubbed ‘Naked Athena.’

‘I believed all his stories,’ Fox said.

‘He said he was just hanging out at Riot Ribs [an anarchist food co-op] and doing peaceful things.

‘I don’t condone any of this. I am amazed at all of these events.’

She told the paper that her last communication via text with her grandson was when he asked her to delete the photo of him wearing the vest, and to remove her comment about the purchase.

She says she first became aware of the bombing video on Wednesday when a family member contacted her with links to Twitter. 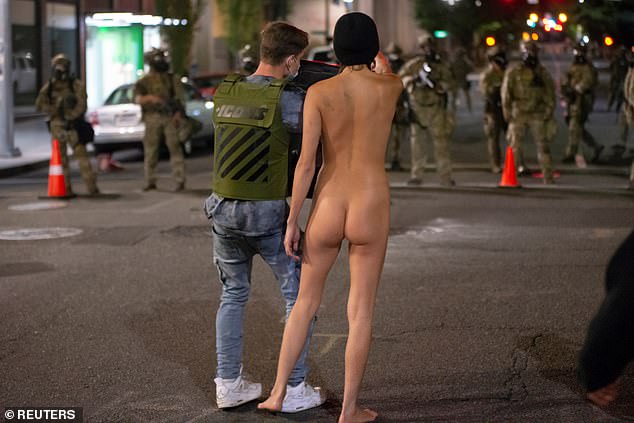 Agard-Berryhill told the paper he did not intend to damage the building or hurt anyone.

‘The device I’ve been accused of allegedly throwing was allegedly given to me by an unknown protestor with full face coverings,’ he wrote in a text message.

‘I was allegedly told that it was a strobe firework that wouldn’t damage the building or harm anyone around it.’

Agard-Berryhill has been released without bail, pending his trial.

‘No legitimate protest message is advanced by throwing a large explosive device against a government building,’ he said.

‘Mr Agard-Berryhill’s actions could have gravely injured law enforcement officers positioned near the courthouse, other protesters standing nearby, or himself.

‘I applaud the ATF agents and U.S. Marshals Service deputies who worked quickly to identify Mr Agard-Berryhill before he had an opportunity to hurt others.’

Russel Burger, U.S. Marshal for the District of Oregon, said Agard-Berryhill’s arrest should serve as a warning to others.

‘The violent opportunists engaged in dangerous acts of violence, such as arson, need to realize there will be grave consequences,’ he said.

‘Serious crimes of this nature go beyond mere property damage to the courthouse and endanger people’s lives.’