Ministers launch new test and trace drive and pledge to scale up swab capacity to 500,000 a day

The Government will launch a new NHS Test and Trace public health campaign in a desperate bid to improve the lagging system after it emerged a third of contacts are still being missed.

A TV advert that will air tonight will tell Britons that if they test positive for Covid-19, they must hand over details of people they have come into contact with.

Restaurants, pubs, salons and gyms will now be supported by contact tracers to log their customers’ details so they can be contacted more easily.

It comes after figures today showed that in the week of July 16-22, some 4,242 people infected with coronavirus in England were referred to the programme.

But just 2,809 (77 per cent) agreed to provide details of people they had come into close contact with recently, meaning thousands of potential patients went missed.

A total of 646 with the disease could not be reached at all by the tracers — who phone, text and email someone up to 10 times a day to get hold of them.

As part of the new public health blitz, the NHS will now encourage everyone to get a free test as soon as they get symptoms – previously the advice was to only apply for a swab if you had ‘persistent flu-like symptoms’.

Ministers have today pledged to increase coronavirus testing capacity to 500,000 per day before winter. 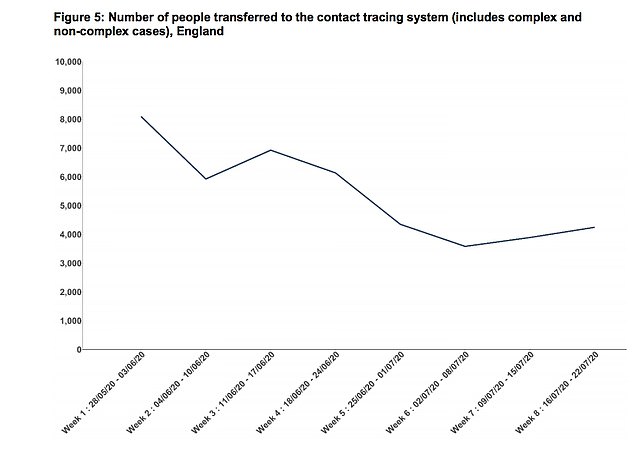 The Government has launched a new test and trace campaign after figures revealed that a third of British contacts have gone missing. Figures from the Government show that numbers of people being referred to the tracing system has steadily declined since May 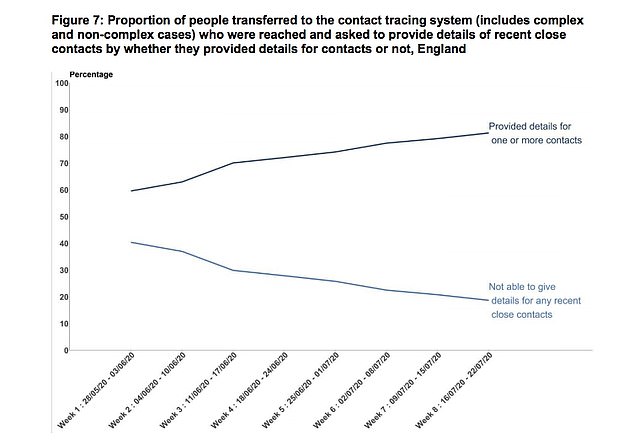 In the week of July 16-22, some 4,242 contacts in England were given to the NHS for tracing purposes. Some 81 per cent of contacts reached were able to give details of one or more contacts 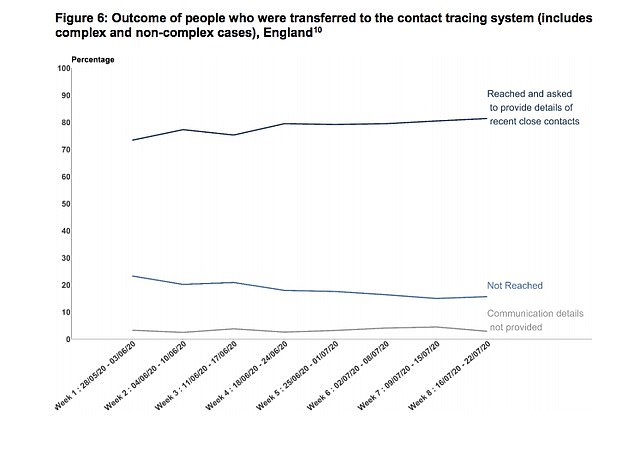 WHICH REGIONS ARE SEEING THE MOST DAILY COVID-19 CASES?

The COVID Symptom Tracker app data has estimated the total number of new coronavirus cases each day in Britain to be 2,103, as on June 20.

This is how the daily cases break down in its estimate:

And for England specifically:

Today’s contact tracing figures, released by the Department of Health, also found that the programme failed to reach almost a fifth of people who tested positive for Covid-19 last week.

Little over 81 per cent of the 4,242 were actually tracked down by tracers – marking the first time the system has caught more than 80 per cent of patients since it launched on May 28.

But the fact it has taken two months to achieve has left critics of the program e less than convinced it is the ‘world beating’ system it was touted as by politicians when it launched.

Meanwhile, the report also found that just three in four people who took a Covid-19 test at a regional site or mobile testing unit received their result within 24 hours.

Boris Johnson promised to turn around every coronavirus test within 24 hours day by the end of June, as the Government fails to meet its own targets again.

About 43,000 people diagnosed with Covid-19 in England have had their cases transferred to the NHS Test and Trace system since its launch. Of them, 77.6 per cent were reached and asked to provide details of recent contacts.

More than 184,000 close contacts of people who have tested positive have been reached by the system and asked to self-isolate – 83 per cent of the total number identified as close contacts.

Chief Executive Chair of NHS Test and Trace, Dido Harding urged everyone in the UK to get a free test as soon as they notice coronavirus symptoms.

She said: ‘The NHS Test and Trace service is a vital part of enabling us to get back to safely doing the normal things we love, and will become ever more important as we approach winter.

‘By working in partnership with local public health and local authority teams we are already helping stop the spread of coronavirus across England, by reaching over 200,000 people who may have been at risk of passing it on.

‘I urge everybody to get a free test as soon as you experience coronavirus symptoms and to follow the advice you’re given if you are contacted by the service. If we all continue to play our part, then together we can stop the spread of this virus.’

The campaign to get people tested and help return to normal officially launches this evening with a new TV advert, and has the backing of The Premier League and England and Wales Cricket Board.

High street brands such as John Lewis, M&S, Lidl and Sainsbury’s are joined by UK holiday companies including Intercontinental Hotels (Holiday Inn), Center Parcs, Butlin’s and Merlin Entertainment who will all help promote the new campaign.

The current testing network is set to grow and improve and the Government will be investing in the most innovative testing technologies.

Getting a test for coronavirus is also expected to become much easier. People will be able to get a test closer to where they live, with the number of testing sites increasing to over 500 locations in England.

By October, the majority of people living in urban settings will be no more than a 30 minute walk from a test site.

April Love Geary has been taking the global COVID-19 pandemic seriously, advocating for social distancing.But the California girl has also been enjoying some quality...
Read more

For Corey Shadbolt, 2019 was a year of dizzying firsts.The 29-year-old carpenter finished his apprenticeship, married the love of his life, Lauren, 31, with...
Read more
- Advertisement -