Around 100 people are financially crippled by sky-high social care bills every week, a charity warns today.

Boris Johnson, who celebrates the first anniversary of his arrival in Downing Street today, promised on the steps of No 10 exactly a year ago that no one would have to sell their home to fund vital help.

But devastating analysis unveiled last night by Age UK shows that since he became Prime Minister, elderly people have had to stump up £7.4billion to fund their own care. On average, they were forced to pay out £44,250 – or £850 per week. 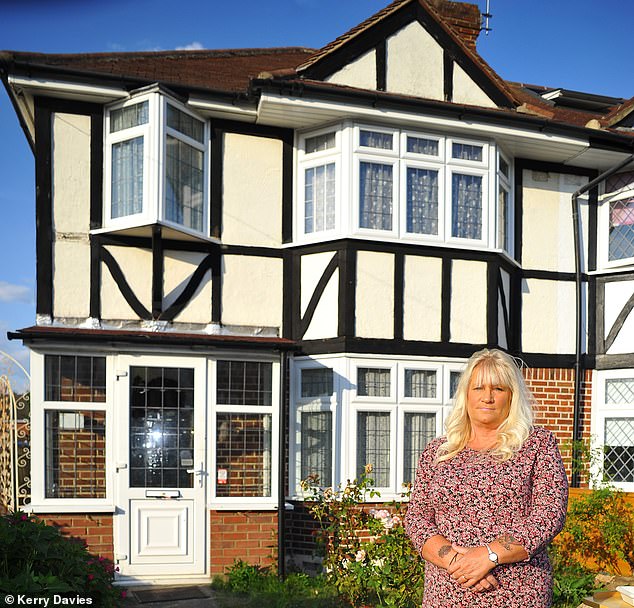 Nancy Griffiths, pictured outside a Barnfield Avenue house in Kingston upon Thames, Surrey. This is not her home. This is the address of her neighbours, David and Violet Edwards, who she knew for 32 years and whom she treated like grandparents, but she has had to sell this house now to pay for their care, like many have had to do in the last year

‘That beautiful cottage was her pride and joy’

Barbara Brand-Cotti, 80, worked as an antiques and jewellery dealer. After meeting her husband Roland in London, they moved to Lincolnshire to pursue their dream of raising children in the countryside.

When their daughter Holly, now 42, was only seven, Roland sadly died, and Barbara had to raise Holly and her two other children alone. Barbara was careful with money, and Holly remembers the whole family celebrating when she paid off the mortgage. 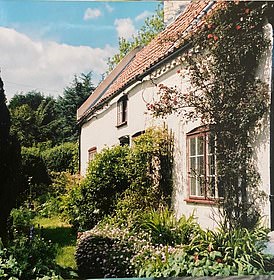 This beautiful Lincolnshire cottage was Holly’s mother’s pride and joy, but Holly was forced to sell it after her mother died

‘That beautiful Lincolnshire cottage was her pride and joy, especially the garden,’ Holly said.

But in 2017, Barbara had a stroke and the next year she was put into social care. After disagreements with the nursing home over payments, including an attempt to evict her mother during lockdown – even having to turn to the Care Campaign for the Vulnerable organisation for legal advice – they gave in and said they would sell the house on Barbara’s death. 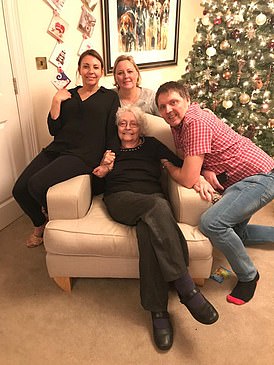 ‘I think it’s one of the biggest injustices in this country that at the end of your life, when you’ve paid into the system, you have to give up everything you’ve saved,’ she said.

‘That cottage meant the world to my mum and she wanted to be able to leave something to us. It just felt wrong to sell it… I felt like I had failed her.’

Only at this point – when they had paid tens of thousands towards their care costs – did the state start to shoulder some of the burden. That is equivalent to 14 people reaching this position every single day, or 100 a week, the charity said, and is a 37 per cent increase on the year before.

Today, Age UK will hand in a 110,000-name petition to Downing Street – online because of the pandemic – to demand a funding settlement for social care. Caroline Abrahams, the charity’s director, said: ‘When he became Prime Minister, Boris Johnson promised to fix social care and make sure no one would have to sell their home to pay for it.

‘Now, after all the loss and suffering caused by the pandemic, it is more important than ever that he follows through.

‘With 14 people a day being ruined due to sky-high care bills and self-funders spending more than £7billion on care in a year, it’s clear that the unlucky individuals who need care face far too high a price. The obvious solution is for us all to share the risk of developing care needs by paying into a national fund, like we do with the NHS.’

She added: ‘More than a hundred thousand members of the public signed our petition before the pandemic… and it’s a fair bet that if we ran the same exercise now there would be even more support.

‘Public awareness of what care does and why it matters has been greatly raised during the pandemic, as has admiration for the work paid care staff do – often for only poverty pay.’

The Daily Mail has been campaigning for a solution to England’s care crisis.

On July 24 last year, when Mr Johnson became Prime Minister, he said: ‘My job is to protect you or your parents or grandparents from the fear of having to sell your home to pay for the costs of care.

‘So I am announcing now –on the steps of Downing Street – that we will fix the crisis in social care once and for all with a clear plan we have prepared to give every older person the dignity and security they deserve.’

But in the year since he entered No 10, no plan has been forthcoming, leaving the elderly facing sky-high care bills for a poor standard of care.

When Chancellor Rishi Sunak unveiled his mini-Budget this month, there was nothing for social care.

Age UK will today stage a ‘virtual hand-in’ of its petition – signed by 109,306 people before the pandemic struck.

Alongside it will be recorded messages from older people explaining how extremely difficult the last year has been for them and why change is so desperately needed.

The Prime Minister’s official spokesman said: ‘We recognise the challenges facing the social care sector and we’re doing everything we can to support it.

‘We remain committed to bringing forward a plan for social care. This is one of the most complex issues that we face and it is right that we take the time.’

Nancy Griffiths, 54, has lived in Kingston, Surrey, for 32 years. She and her daughter Tai, 12, became very close to their elderly neighbours David and Violet Edwards, pictured, regularly spending Christmas together.

David, who had worked for British Aerospace for many years, sadly developed dementia in 2016 and died two years later aged 92.

Violet had hoped to spend her final years in her marital home, but because the couple had saved and lived frugally, David’s care had to be paid for privately at a cost of almost £2,000 a week. 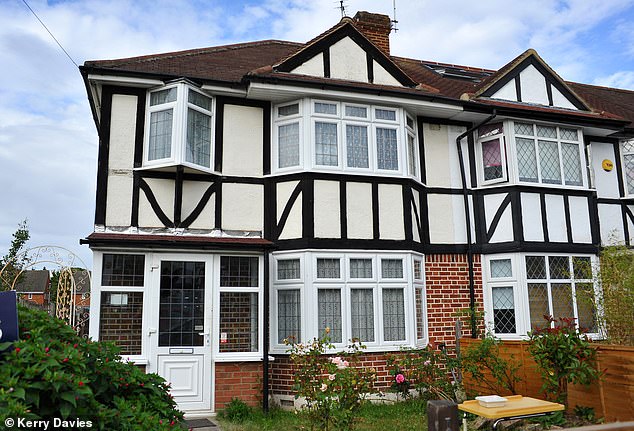 Nancy Griffiths, 54, along with her 12-year-old daughter, became very close with their elderly neighbors – David and Violet Edwards – was forced to sell their home (pictured above) in order to pay for Violet’s care after David had died

After David’s death, Violet, also 92, became very frail and was moved into a care home at an eye-watering cost of £65,000 per year.

Within four years, £300,000 of their hard-earned savings of about £400,000 had disappeared, and Nancy, who had power of attorney, unfortunately had no option but to sell the Edwards’ house this month to pay for Violet’s care. 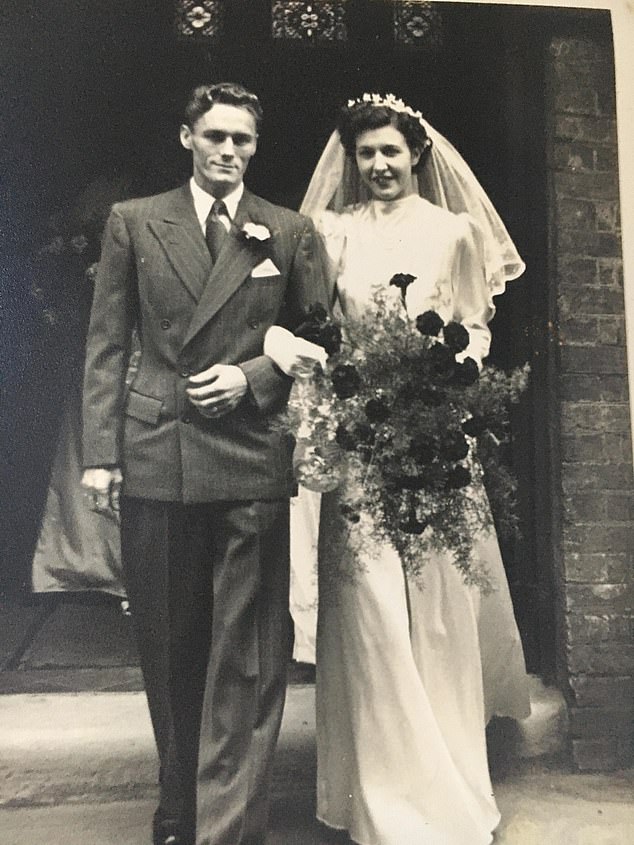 David and Violet Edwards – pictured on their wedding day – became very close with their neighbour Nancy Griffiths, who was forced to sell their home to pay for Violet’s care

‘David made everything in that house, from the conservatory to the fireplace – he even papered all the walls,’ said Nancy. ‘It broke my heart to sell it.’

She added: ‘Boris needs to change the law so that people don’t have to sell their home for social care, I think it’s completely wrong.

‘I’m not Violet’s daughter so I won’t be getting anything in the will, but I feel so sorry for people who expected to rely on money from their parents after they’ve died.’

‘It was her dream to leave her house to family’

Carole Gregory, 69, lived next door to her mother’s cousin, Bessie Pyrah, who was born in 1916.

Bessie lived with her husband Stanley in Methley, near Leeds, in a beautiful cottage near the railway tracks, where Stanley also worked.

But when Bessie was diagnosed with dementia in 2001, she required social care. 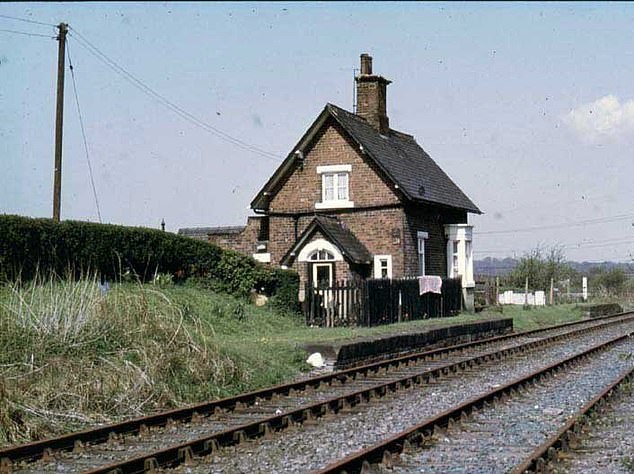 Bessie Pyrah lived in this beautiful cottage next to the railway tracks, but when she was diagnosed with dementia in 2001 she required social care

By 2005, all the money was gone. Carole was left with no option and was forced to sell their beloved home. 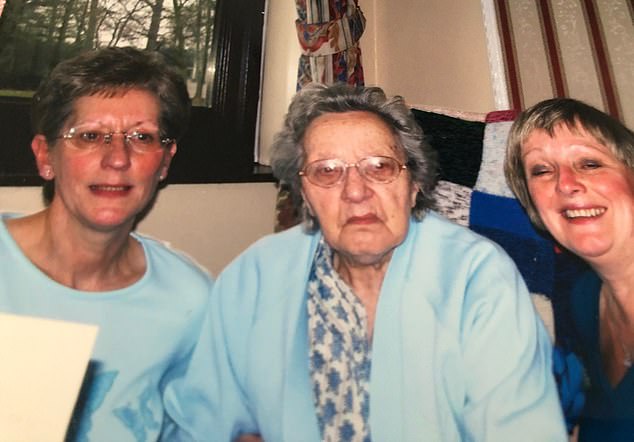 ‘It’s not right, all her savings and house disappearing like that,’ Carole said. ‘I would like to see the rules change.’

Joyce was diagnosed with dementia in 2004, and in 2014 her husband passed away. She required increasing amounts of care, funded by the council until August 2019, said Kelly. 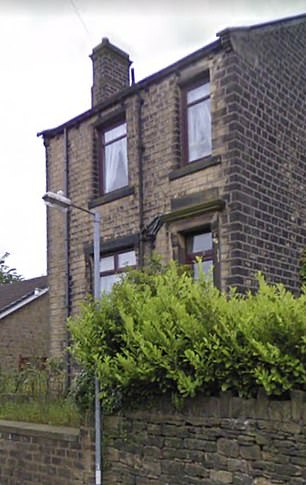 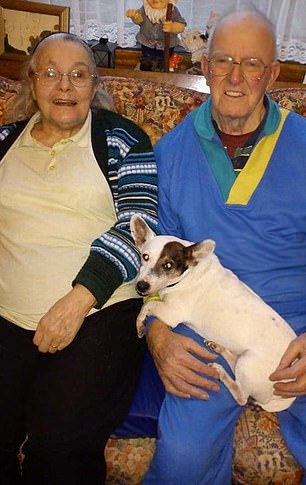 Kelly Houghton says she will be forced to sell her grandmother’s house (left) to fund her care home. Pictured right:  Joyce pictured with Richard (right) was diagnosed with dementia in 2004, and in 2014 her husband passed away