The founder of the Guardian Angel's has vowed to have 60 members of their organisation patrolling part of Manhattan amid growing safety concerns.Curtis Sliwa,...
Read more
US

Lloyds Bank has axed its family support mortgage deal that allows first-timers to buy a home without a deposit.The bank has stopped accepting new...
Read more
Home News Stories DOMINIC SANDBROOK: A £1.6 TRILLION EU splurge. I was Remain... but what...
NewsStories
July 21, 2020

DOMINIC SANDBROOK: A £1.6 TRILLION EU splurge. I was Remain… but what a relief we’re out!

For as long as I can remember, late night bust-ups have been par for the course at European Union meetings.

Even so, this week’s Brussels summit to rescue the EU’s pandemic-blighted economy was in a class of its own.

For more than four days, the leaders of the 27 member states were locked in sweatsodden battle, while reports of table-thumping and shouting matches filtered through to the waiting media.

At last, just after dawn yesterday, a visibly exhausted Charles Michel, President of the European Council , appeared before the cameras.

‘We did it!’ he declared. ‘Europe is strong! Europe is united!’ Strong? United?

Well, let’s see. To cut a long story short, on top of signing off on a new €1 trillion sevenyear budget, the EU eventually agreed to hand out an astonishing €390 billion in grants to recession-haunted countries such as Italy and Spain, as well as a further €360 billion in low-interest loans. 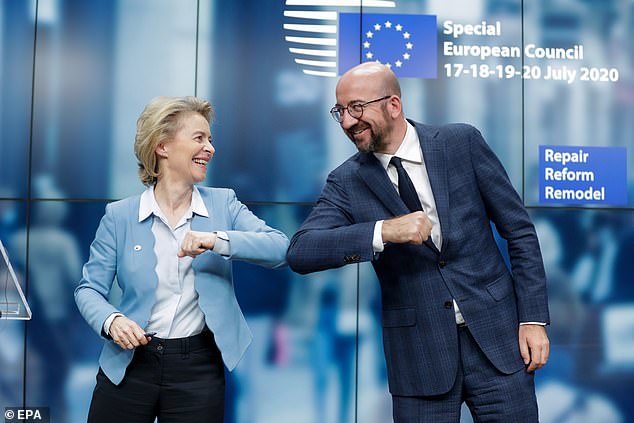 Just after dawn yesterday, a visibly exhausted Charles Michel (pictured with Ursula Von Der Leyen) appeared before the cameras. ‘We did it!’ he declared. ‘Europe is strong! Europe is united!’

Added together, that amounts to a €1.75 trillion (£1.6 trillion) splurge. Right on cue, pro-European commentators stepped forward to hail it as a landmark event, representing a gigantic step towards an integrated United States of Europe.

One pro-European e­conomist, Anatole Kaletsky, even compared it to the moment in 1790 when the United States of America became a true political federation.

Nice idea. But not, I think, remotely convincing.

The real story of the EU summit was not the outcome: a classic fudge in which nobody got what they wanted.

Nor was it even the agonising sluggishness of the process — such a contrast with Rishi Sunak’s decisive measures to prop up Britain’s economy.

No, the most striking aspect was the astonishing bitterness with which the EU leaders argued into the small hours, exposing all too clearly the deep chasms beneath the facade of fraternal unity.

The most obvious schism is between the rich countries of the North, who believe themselves champions of sound money and low debt, and the poorer nations of Mediterranean and Eastern Europe, who have long chafed at what they see as their economic subordination.

Having suffered grievously during the coronavirus pandemic, Italy, Spain and Portugal asked for grants worth some €500 billion. 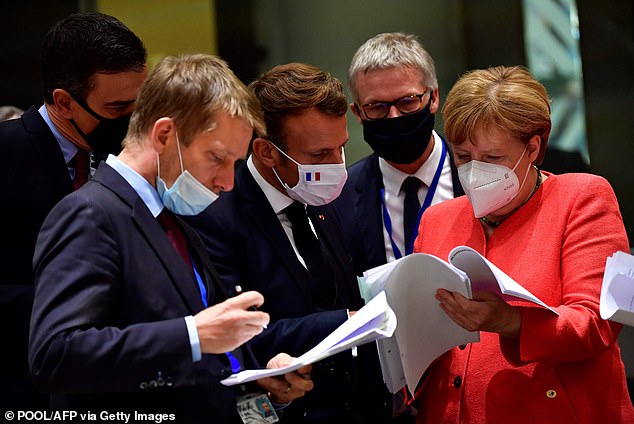 But in their path stood the ‘frugal four’ — Sweden, Denmark, Austria and the Netherlands — who made it clear they were sick of bankrolling their poorer cousins.

These are old arguments, recalling the furious rows over the bailouts for debt-crippled Greece and Ireland a decade ago.

But rarely have they raged with such seething intensity. The Dutch prime minister, Mark Rutte, insisted that any rescue package should involve a commitment to the ‘rule of law’, which many commentators saw as a rebuke to Hungary’s authoritarian strongman Viktor Orban.

Squaring up like a nightclub bouncer, Mr Orban demanded to know ‘the personal reason for the Dutch prime minister to hate me or Hungary’.

Mr Macron was on fighting form, reportedly thumping the table like an overwrought t­eenager.

At one point he shouted at Austria’s chancellor, Sebastian Kurz, for leaving the room to make a phone call.

In fairness, it is easy to see why the French president was so agitated. He sees himself as the guardian of the European soul, yet his fellow leaders are manifestly more devoted to their own national interests.

The Franco-German axis, on which European affairs have turned for the last half-­century, is in deep trouble.

Economic stagnation, national populism, anxiety about immigration and the searing impact of the coronavirus pandemic have taken a heavy toll.

So instead of falling dutifully behind Paris and Berlin, more and more European leaders prefer to line up with their likeminded neighbours, from the sound-money Scandinavians to the begging-bowl southerners.

Even Italy, the EU’s third most populous country, is no longer a reliable FrancoGerman ally.

A few weeks ago, Claudio Borghi, economic adviser to the largest Italian party, the populist League, tweeted a World War II poster of a grinning Nazi soldier with the slogan, ‘Germany really is your friend’. ‘Time passes,’ Mr Borghi wrote ominously. ‘But the t­actics are always the same.’

So much, then, for burying the hatreds of the past! The irony is that the EU elite have never talked more f­ervently about the virtues of their beloved ‘project’.

Yesterday, even the shattered Mr Michel claimed that the summit had demonstrated ‘the magic of the European project’.

What rubbish! To an outsider, as we British now are, it is blindingly obvious that European unity is little more than a pious fantasy.

In many ways, as callous as it might sound, the coronavirus pandemic was a tremendous opportunity for the EU.

This was a chance for it to prove its worth at a time of genuine, lifethreatening crisis. It was an opportunity to proclaim the virtues of Continental s­olidarity, and to show that federalism really is the future.

But, of course, things didn’t turn out that way. 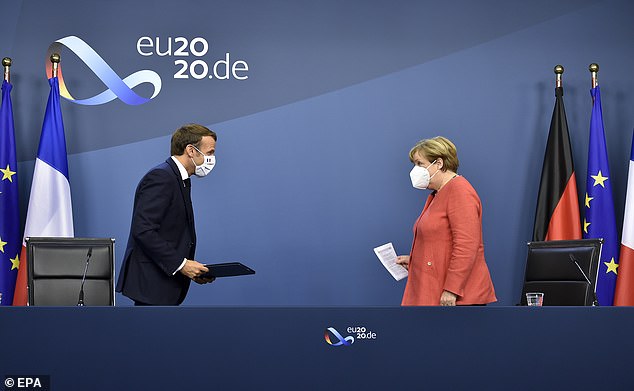 Right from the start, EU citizens looked to their national governments, not to Brussels.

Each member state raced to adopt its own policies, secure its borders and even get hold of its own personal protective equipment.

For the hardest-hit countries, such as Italy and Spain, the lack of solidarity was hard to take.

Feelings ran so high that in April the European Commission president, Ursula von der Leyen, even offered a limp apology to the Italians, whose requests to their neighbours to send medical aid had gone unanswered.

But the lack of solidarity was no fluke. The reality, which the federalist elite refuse to accept, is that most EU citizens still see themselves as members of a nation-state first and as Europeans second.

At the height of the pandemic, for example, the Danes closed the famous Oresund Bridge to nearby Sweden, while the Danish police literally turned back Swedes trying to cross the straits by ferry.

If, at a time of crisis, people as self-consciously progressive as the Danes and the Swedes insist on putting their national identity first, then how on earth can you expect, say, the Latvians, the Portuguese, the Hungarians or the Romanians to behave differently?

All of this, I think, bodes very ill for the EU. The tensions between penny-pinching Dutchmen and bombastic Hungarians, parsimonious Danes and impecunious Greeks aren’t going to disappear.

And if tempers are fraught now, just imagine the mood once unemployment has rocketed and a new wave of national populism has swept across southern and eastern Europe.

As the decade wears on and the inequalities yawn ever wider, resentment is bound to build, the fragile bonds of Continental unity fraying almost to nothingness.

And although some commentators argue that the EU is bound to muddle through, it’s perfectly possible to imagine the whole ramshackle edifice falling apart.

No multinational entity, after all, lasts for ever.

Will Hungary still be there in ten years’ time? Will Poland? Or will one of the richer northern countries decide that it’s no longer worth it?

As some readers will remember, I voted Remain four years ago.

But do I wish our Prime Minister had been there in Brussels, arguing about ­Rotterdam’s customs revenue?

Do I wish we were joining our Continental friends in their collective borrowing spree? Well, I think you can guess the answer.

The founder of the Guardian Angel's has vowed to have 60 members of their organisation patrolling part of Manhattan amid growing safety concerns.Curtis Sliwa,...
Read more
- Advertisement -
US

Lloyds Bank has axed its family support mortgage deal that allows first-timers to buy a home without a deposit.The bank has stopped accepting new...
Read more

The founder of the Guardian Angel's has vowed to have 60 members of their organisation patrolling part of Manhattan amid growing safety concerns.Curtis Sliwa,...
Read more
Australia

Peering through the tiny window of a hospital ward, Caitie Scott says goodbye to her mother whom she no idea when she will see...
Read more
US

Peering through the tiny window of a hospital ward, Caitie Scott says goodbye to her mother whom she no idea when she will see...
Read more

Pesticides and fertilisers from agriculture have overtaken fossil fuels as the largest human source of sulphur in the environment, a study has revealed.Reactive sulphur...
Read more

UK universities ‘bribe’ prospective students with up to £1,200

More than a quarter of UK universities are attempting to 'bribe' A-leve pupils with laptops and discounts and cash offers if the chose them...
Read more

A son was jailed for life after he stabbed his father to death in an argument over the broadband speed. Stephen Gallagher, 55, grabbed the...
Read more

Harrowing footage shows the moment a surfer was swept up in treacherous waves and dragged under a storm water pipe in a tragedy that...
Read more