An affluent seaside town has complained rogue ice cream sellers are 'taking downright liberties' by setting up along their genteel seafront.Frinton-on-Sea in Tendring, Essex,...
Read more
Home Coronavirus Map shows MILLIONS of children will return to school in August despite...
Coronavirus
July 18, 2020

A state-by-state map shows millions of American schoolchildren will be back in the classroom when the 2020-2021 academic year commences.

Almost all students have been learning from home since the coronavirus pandemic forced schools to shutter across the country in mid-March.

But many are set to reopen their doors from next month,  despite the fact that cases of COVID-19 continue to surge.

On Thursday, the country shattered its daily record for COVID-19 cases with more than 77,000 new infections reported in just 24 hours. More than 3.5 million people across the country have contracted the contagious virus, and 141,00 have died.

President Trump and Education Secretary Betsy DeVos have been pushing for a full reopening of schools across the country.

On Thursday, Press Secretary Kayleigh McEnany told reporters: ‘When President Trump says open, he means open and full, kids being able to attend each and every day at their school. The science should not stand in the way of this.’

However, while millions of students will be back in the classroom, most will only attend on a part-time basis.

An examination of each state’s policies shows that most governors are leaving it up to individual districts to determine how their schools will operate. 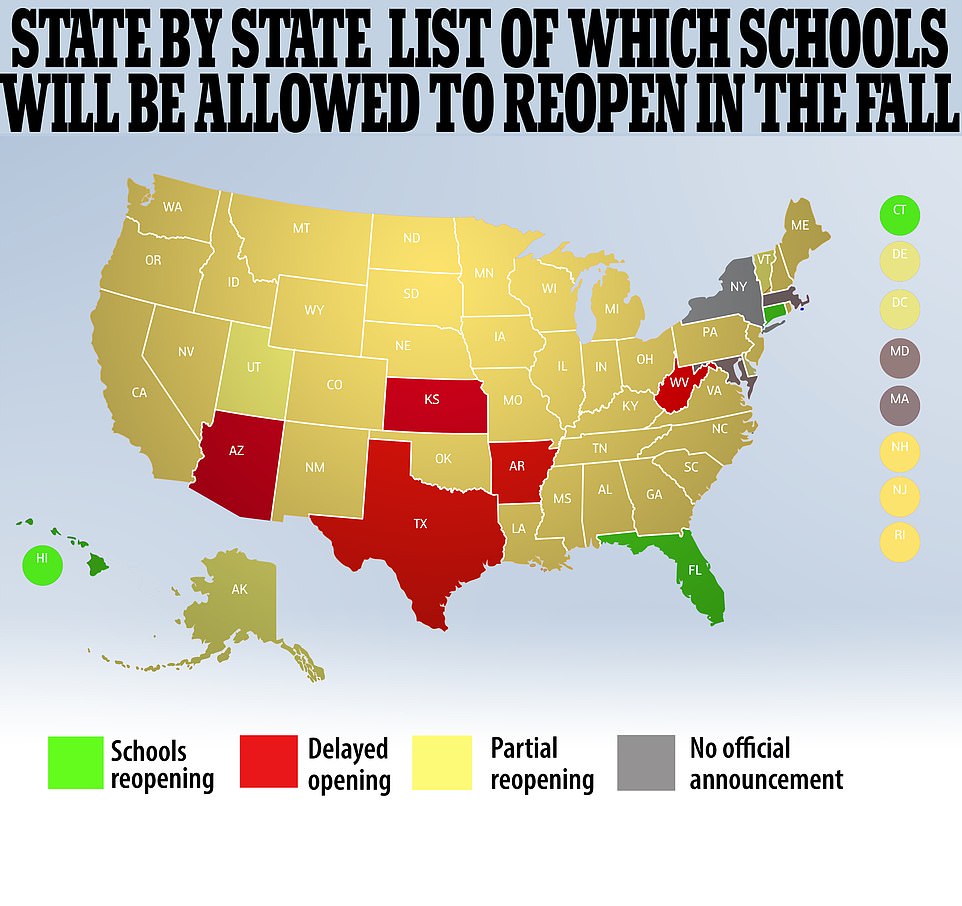 At present, it appears most are opting for a partial reopening – a  mix of in-person and online learning. School attendance will be staggered so as to ensure  that students can practice social distancing.

Schoolchildren may be required to attend classes in person no more than two or three days per week.

Only officials in Florida, Hawaii and Connecticut have explicitly stated they want students to return to school on a full-time basis in the fall.

In those states, unions, teachers and parents have expressed outrage and are trying to resist the move.

Meanwhile, Arizona, Kansas and Texas have officially pushed back the start of their school year amid surging numbers of COVID-19 infections.

For those schools that do reopen from next month, most will be following CDC guidelines, which include having students and teachers stay six feet apart from one another. Most schools will require children and faculty to don face masks inside. 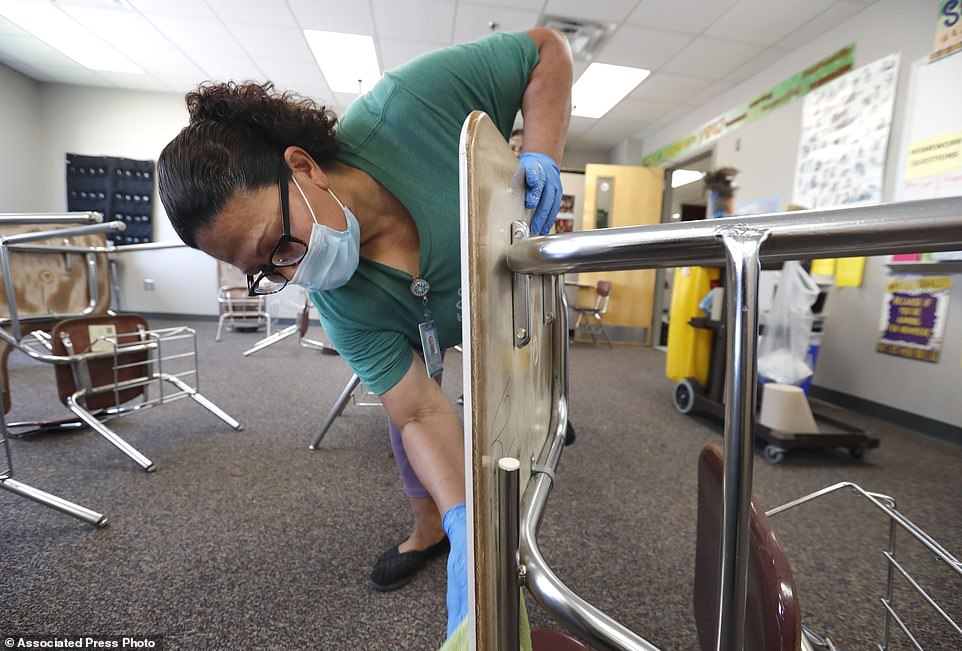 Texas will delay sending millions of students back to school amid surging COVID-19 cases in the state. Pictured: a cleaner wiping down a desk at Wylie High School, north of Dallas

Other changes mean that schools may not ever return to the way they once were.

Some schools are banning pep rallies, assemblies and extracurricular activities in a bid to stop the spread of the coronavirus currently crippling the United States.

Educator Kate Ford has referred to the changes as an ‘educational tsunami’, telling Newsmakers: ‘Tsunamis change everything, and it will be a completely changed world. I don’t think education will ever be the same.’

STATE-BY-STATE: HOW THE ACADEMIC YEAR WILL LOOK FOR STUDENTS ACROSS AMERICA

Gov. Kay Ivey has not issued a mandate ordering all schools to reopen. Instead, officials have released a framework of recommendations. According to Alabama.com, a majority of school districts are allowing students the choice as to whether they attend physical classes or dial in virtually

School districts are expected to follow the state education department’s Smart Start 2020 framework. While most schools are expected to resume in-person classes, some schools will continue with distance learning. The Anchorage school district will push back the start of their school year by two days so teachers can implement safety precautions.

Arizona schools usually start its academic year in early August. In light of COVID spikes, Gov. Doug Ducey has delayed the first day of instruction to August 17 at the earliest. The date may be pushed back further.

Arkansas will resume classes on August 24 instead of August 13 , Gov. Asa Hutchinson has announced. School districts will then decide on their mode of instruction. In areas with low coronavirus infections, students will likely return to school full-time. In districts with high cases, learning could continue in an online format

On Friday, Gov. Gavin Newsom announced safety criteria for reopening schools. Counties must have low rates of COVID-19 in order to allow students back into the classroom. At present, more than half of all California counties fall short of the standards required to reopen

According to Ballotpedia.org, Education Commissioner Miguel Cardona said June 25 ‘that his department was proposing all schools reopen to students in the fall. Students and staff will be required to wear masks while inside school buildings’. However, the plans have been hotly contested by many parents and teachers. Gov. Ned Lamont says he is now looking into the matter and will make an announcement next month

Last week,Florida’s Commissioner of the Department of Education  issued an emergency order requiring all “brick and mortar schools” to open “at least five days per week for all students.”  The decision has been hotly contested. Some school districts now plan to delay the start of their school year

Decisions will be made by individual school districts. Some have pushed back the start of the school year and will conduct some instruction online

Governor Kim Reynolds is pushing for schools to prioritize in-person learning, but has not issued a mandate ordering them to do so. However, schools will be required to deliver in-person instruction at least 50 percent of the time.

Gov. Laura Kelly has mandated that schools not reopen until after Labor Day. Masks must be worn at schools delivering in-person instruction

Local districts will decide whether or not to reopen their schools. Guidelines state that schools can opt for a mix of traditional, hybrid and distance learning

Decisions will be left to local districts. Many may opt for a mix of in-person and virtual learning

State Superintendent Karen B. Salmon will provide an update on schools reopening next week. However, most schools appear to be opting for a mix of Virtual learning, in-person and hybrid systems. Baltimore City Public Schools may offer families the option of an all-virtual school year

Massachusetts – No Plan Announced Yet

Some schools will reopen after Labor Day, others are considering staggering attendance in order to ensure social distancing.

Online learning is likely to be a component for most students, as schools will stagger attendance

The final decision to open will be up to districts. St. Louis County has announced they will reopen schools with masks and social distancing in place. However, some classes may take place online.

Most schools are reported to be opting for a hybrid mix of in-person instruction and virtual learning.

Gov Ricketts had urged schools to reopen but has not issued a mandate. He stated: ‘It’s almost going to be a building-by-building decision–and some of those decisions are going to be very difficult. Please, work with your schools on this.’

Officials are leaving decision up to local districts, although it is expected most schools will physically reopen with safety precautions.

According to local news outlets, online learning is likely to be prioritized in the first few weeks of the academic year across the state

New York – No Plan Announced Yet

Gov. Cuomo says he is set to release more details in the coming weeks. However, it seems unlikely most students will return to school on a full-time basis. In New York City, Bill de Blasio said he anticipates schools will re-open sometime in the fall with students attended on a staggered schedule to ensure social distancing.

Officials say it will not be easy to immediate place all students safely back in schools after closing schools in mid-March.

Gov. Doug Burgum has stated: ‘We flicked the light switch off in the spring. That was easy. Flicking it back on, we’re not turning it back on to the same thing that we were…. K-12 schools have to think about how they’re going to have to deliver education in those buildings in a way that allows them to stay open.’

Gov. Mike DeWine has urged schools to try and reopen their schools for full attendance, saying student learning is better in-person. However, he had conceded that ‘schools can adjust their rules to what works best for them for a safe environment and that protects students and staff.”

Previous guidance from officials has recommended that schools offer three weeks of virtual instruction to start the year, but risk losing state funding if they do not return to in-person instruction shortly after. However, Gov. Abbot is now reconsidering in light of surging COVID-19 cases across the state.

Officials are leaving the decision to individual school districts, however it is likely most schools will reopen and students will attend in person full-time due to low infection numbers across the state.

Official guidances has outlines several scenarios that schools could follow. These reportedly include ‘four-day school weeks, a two-day rotation, an a/b week rotation, and virtual learning’.