A man has drowned while swimming at thermal pools at a popular tourist spot. Northern Territory Police responded to a report that a man, 23,...
Read more
Home News LA's first black DA slams BLM for targeting her home after her...
News
July 13, 2020

The first black person to serve as district attorney for Los Angeles has criticized Black Lives Matter activists for showing up at her house in the middle of the night, leading her husband to pull a gun on them.

Jackie Lacey, who was elected in December 2012, was asked in an interview on Saturday about the March 2 incident.

She was also questioned about moves to defund the police, her record in policing the police, and how it feels to have Black Lives Matter now campaigning to get rid of her in the November election.

‘It’s surreal,’ she told CNN, speaking about the weekly protests against her. 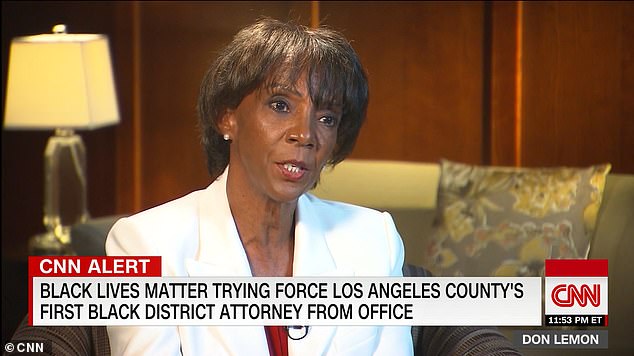 Jackie Lacey, in an interview with CNN which aired on Saturday, discussed the BLM protests

She said many within BLM seemed unaware of her story, and her rise from humble beginnings to be the first black DA in the 170-year history of the office.

‘I get in here and the most vocal group who wants to take me out is a group known as Black Lives Matter,’ Lacey said.

‘They’re treating me like ‘the man. But if they only knew that I’m the girl from the neighborhood.’

For two and a half years BLM have been questioning her leadership, and taking issue with her failure to prosecute police officers accused of misconduct.

She defended her record, saying protesters often did not have access to the full facts or grasp the legal nuances.

‘While you may look at a shooting by an officer and say, ‘Oh, they could have shot him in the leg, they didn’t have to respond that way,’ that’s not the test under California law,’ Lacey said.

‘The test is when somebody’s life is in danger.’ 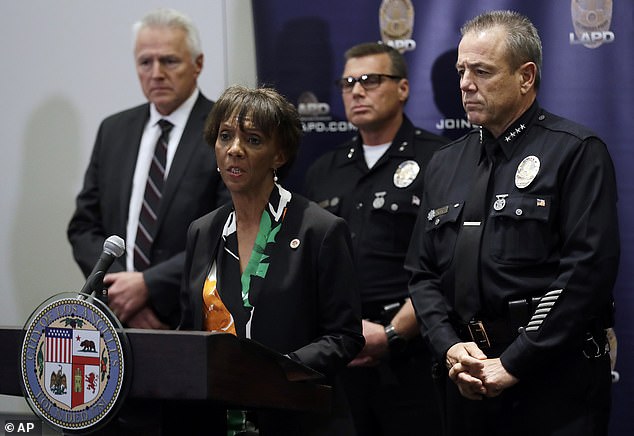 Lacey, born in the Crenshaw district of the city, defended her record on police brutality 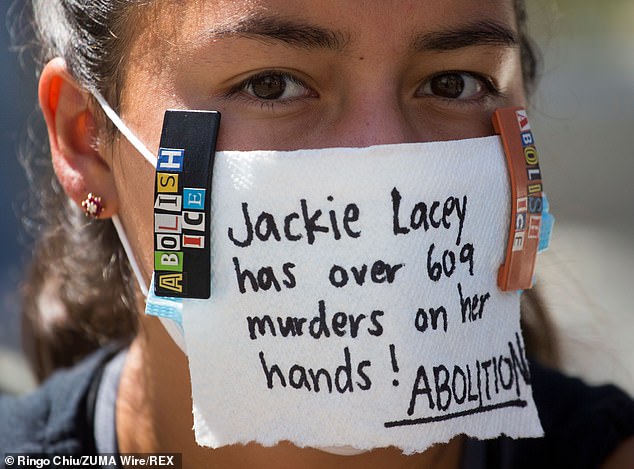 Lacey’s record is under intense scrutiny, as shown by this protester on July 8

Black Lives Matter has compiled a list of more than 600 people killed by police since Lacey took office in 2012.

Lacey puts the number at about 340, and said only 14 or 15 of those shootings’ involved citizens who were unarmed.

‘I can’t tell you how many times I’ll look at a case on television and say, okay, this is coming my way. Let’s see what it’s about,’ Lacey said. 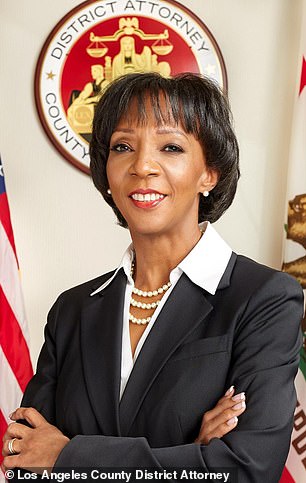 Lacey is the first black LA DA since 1850

‘And I open the book and I say, ‘Oh, no one mentioned that the guy had a gun, or the woman had a knife.”

According to an official tally by her office, Lacey has reviewed 252 fatal shootings through May 2020.

One of those cases resulted in charges against an L.A. County sheriff’s deputy.

The rest were declined.

Lacey, 63, was born in South-Central Los Angeles, in the historically African American district of Crenshaw.

She said that, while she supported reassessment of policing and a re-evaluation of whether money would be better spent on social work, she could not whole-heartedly endorse moves to defund the police.

‘If you’re talking about redistributing funds, I absolutely agree with that,’ she said.

‘I’ve advocated for mental health funds to go to communities of color since 2013. I’ve been advocating for treatment of drug addiction for a long time.

‘But if you’re talking about, let’s just take all the police out of our community and if a crime happens, just let someone else respond, I just don’t think that’s realistic.’

She said that her experience of growing up in Crenshaw and living in LA in the 1970s and 80s defined her perspective. 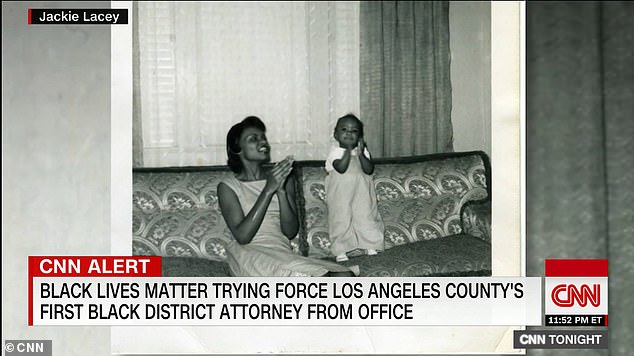 Lacey as a child, pictured with her mother in the Crenshaw district in South-Central LA

‘People don’t realize in the seventies and eighties how dangerous it was in Los Angeles,’ she said.

‘I remember when (my parents) used to complain that police don’t care about our neighborhood.’

Lacey’s main adversary in the BLM movement has been Melina Abdullah, co-founder of the LA chapter of the organization.

It was Abdullah who, tired of waiting to meet with Lacey, decided to march on her home.

During a contentious October meeting of the Stonewall Democratic Club, the group said that Lacey promised to arrange a meeting – but never delivered. Lacey insists she never declined to meet them, but just did not want a repeat of the large-scale rowdy forum.

‘So we decided to have the meeting in front of her house,’ Abdullah said. 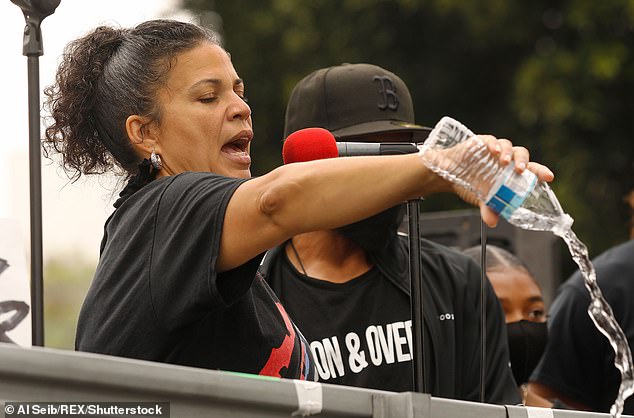 Melina Abdullah, co-founder of the LA chapter of BLM, pictured at a rally on June 23 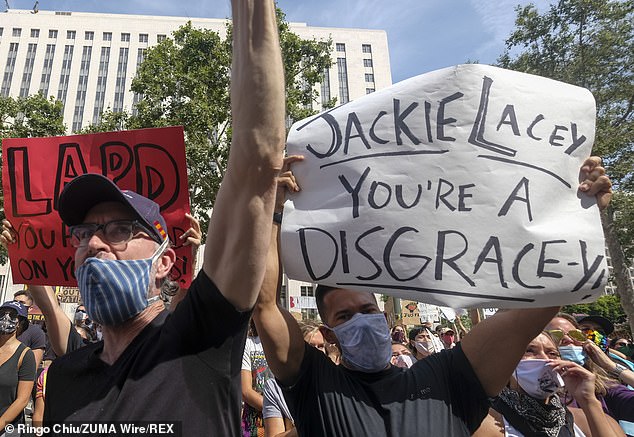 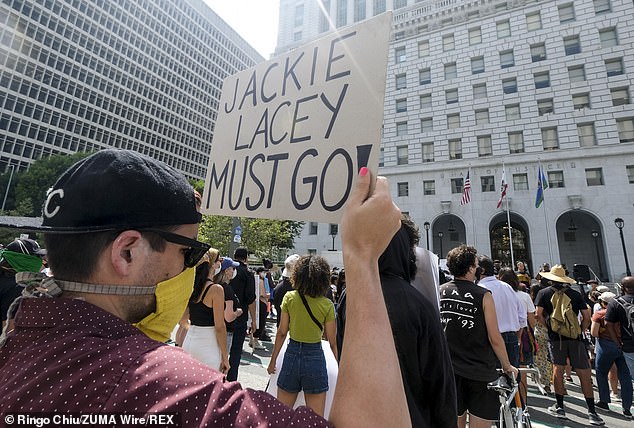 The group arranged chairs and prayed on the sidewalk but did not initially approach Lacey’s property until Abdullah and two others went to the front door.

Then, they said, they heard a gun cock.

‘I thought I was being paranoid, and I said, ‘That didn’t sound good,’ Abdullah told the Los Angeles Times.

‘And then her husband opened the door and pointed a gun and said. ‘Get off my porch.’

Lacey apologized for the incident in the immediate aftermath.

But in Saturday’s CNN interview, she said that the activists had crossed a line.

‘I definitely don’t think you should be able to come onto someone’s property,’ she said.

‘That crosses a line.’

Lacey will have to compete in the November 3 runoff election against George Gascon, the former assistant chief of LAPD and chief of San Francisco police, who went on to become San Francisco district attorney.

Lacey had hoped to avoid the runoff, but finally finished at 48.6 per cent, with Gascon on 28.2 per cent.

A man has drowned while swimming at thermal pools at a popular tourist spot. Northern Territory Police responded to a report that a man, 23,...
Read more

A man has drowned while swimming at thermal pools at a popular tourist spot. Northern Territory Police responded to a report that a man, 23,...
Read more
Coronavirus

Pregnant radio host Ash Pollard and partner Pete Ferne, 35, are counting down the weeks until they welcome their first child together. And on Tuesday,...
Read more
- Advertisement -

Kim Kardashian, 39, is currently in the Dominican Republic with Kanye West, 43, in an attempt to salvage their crumbling marriage and focus on...
Read more