The Gallagher Premiership will resume on Friday August 14 with Harlequins facing Sale Sharks as domestic rugby announces its return from the coronavirus pandemic. The...
Read more
Coronavirus

This is the moment a person of interest in the William Tyrrell investigation discovered a secret police surveillance camera in the bushes near his house and took it inside – not realising it was switched on.

Paul Savage, 75, is an elderly widower who was once a focus of the police investigation into the disappearance of Australia’s most famous missing boy.

Savage lived across from where Tyrrell vanished from his foster grandmother’s home in Kendall, on the mid-north coast of NSW, on September 12, 2014.

Documents released by the Coroner this week reveal police were troubled Savage took the hidden camera inside and then failed to report it to detectives in the middle of the investigation.

Photos show the camera repeatedly took photos of Savage’s as he plucked it out of the bushes and walked it into his home on March 25, 2016, where police claim kept it for five weeks. 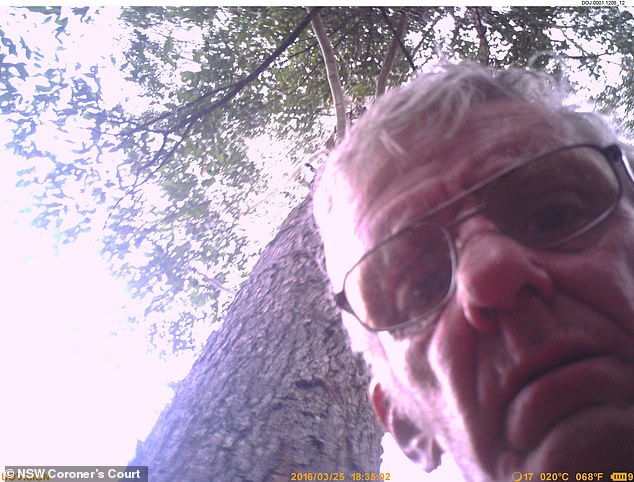 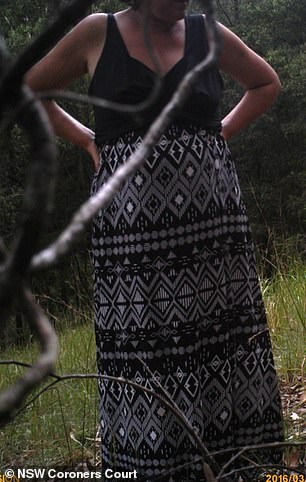 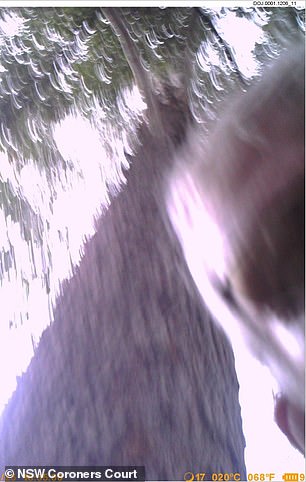 A later still snapped by the camera after Mr Savage brought the camera into his home in Kendall, which is situated down the road from William’s foster grandmother’s house

Homicide detective Laura Beacroft made clear how concerned NSW Police were about Mr Savage seizing the device in a memo released by the Coroner.

‘Mr Savage removed a covert bush camera from a tree near to his property and made no attempt to enquire as to its owner, when he might have expected to know it was the property of the NSW Police Force,’ she said.

Detective Beacroft said Savage had became a person of interest in the investigation as he knew William’s foster grandma sometimes had children staying with her.

The detective said his account of his movements on the day William vanished were ‘odd’.

‘He went searching on his own, stated he got lost in terrain he might have expected to be familiar with and he did not report the outcome of his searching.

‘There are periods of time where Mr Savage’s movements cannot be corroborated,’ she said.

Mr Savage has consistently denied any role in the three-year-old’s apparent abduction.

The Kendall local was grilled by police on several occasions, including a four-and-a-half hour formal police interview on August 16, 2017. 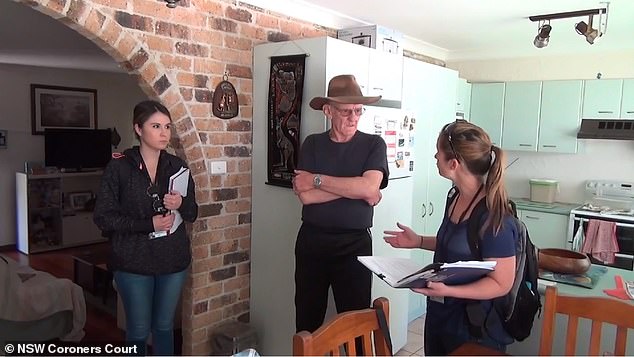 Savage (above, in Akubra) is seen during a police walkthrough of his home with two Homicide Squad detectives 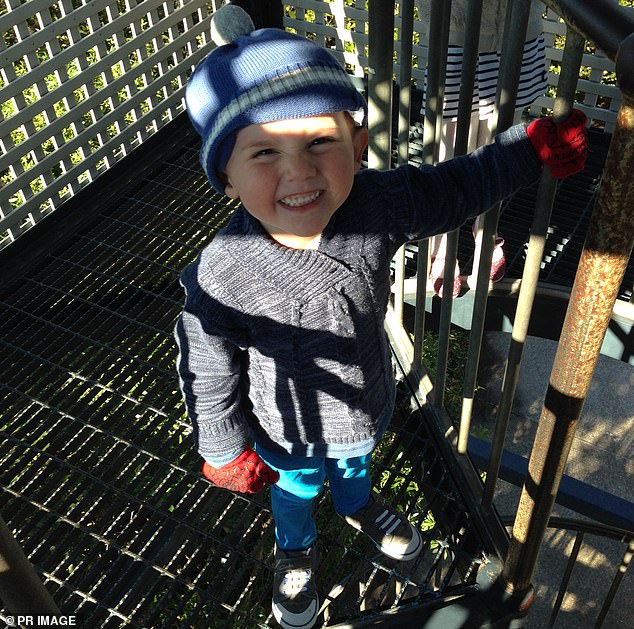 William Tyrrell, above, vanished from his foster grandmother’s home at Benaroon Drive, Kendall, on September, 12, 2014. If he is still alive, he would be nine-years-old

In the interview, Mr Savage became emotional while talking about his late wife Heather and denying former Detective Chief Inspector Gary Jubelin’s claims he was a liar.

‘I’m not interested in lying. I’d do anything I could to help youse find that little bloke,’ he said.

The veteran homicide cop then turned to the pensioner and said: ‘OK then, let’s talk about the camera’.

‘The camera that, uh, I handed to police?’ Mr Savage asked.

The pensioner told detectives it had been found by his daughter and he ‘thought it was (switched) off’.

Mr Savage said he thought he had kept it inside at his home for about a week and that he had planned to hand it over to police.

The detectives corrected him: it had taken him five weeks to cough it up. He had only surrendered it to officers the next time officers had visited his home.

Mr Savage said: ‘ I didn’t get it any more thought. It’s a camera sittin’ up in the bush. God knows how … long it had been there.’ 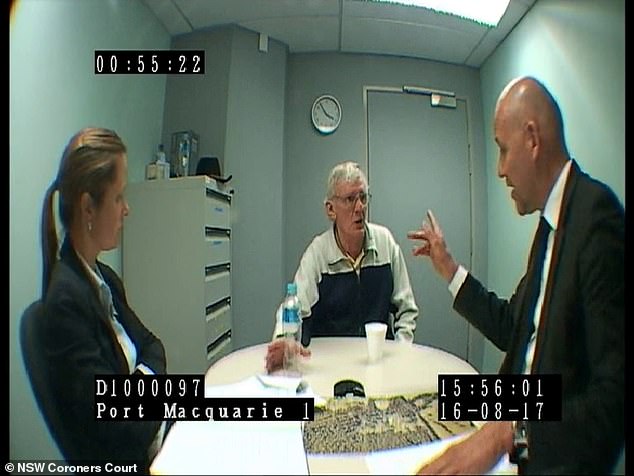 Mr Jubelin said Mr Savage had constantly seen police exploring the bush, and had spoken to officers himself, but he still took the camera down without telling detectives.

‘But no, you took the camera off and hung onto it and only gave it back when police were, turned up looking for it.’ 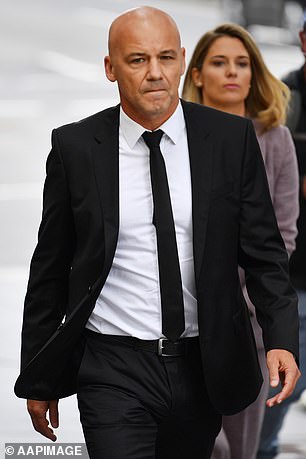 Mr Savage replied: ‘They didn’t turn up looking for it … he (the police officer) was as surprised as blazers when I gave it to him.

Mr Jubelin accused Mr Savage of being ‘flippant’ toward the investigation, which Mr Savage denied.

The prominent detective’s pursuit of Mr Savage played a role in ending his career as one of the leading lights of the NSW Police Force.

Mr Jubelin quit the Force last year and was convicted of four counts of illegally recording Mr Savage while heading up the Tyrrell investigation, known as Strike Force Rosann.

The magistrate who convicted Mr Jubelin said in court that the officer had pursued Mr Savage at ‘all costs’ despite ‘no DNA, fingerprints … no leads, nothing’.

In March, Mr Savage told The Australian newspaper that investigators are ‘done’ with him.

But he told Daily Mail Australia in April that he was still waiting to see what happens next. ‘I’ve got to see what else to come,’ he said.

Coronial evidence appears to suggest the Tyrrell investigation has turned its attention to another person of interest – paedophile prisoner Frank Abbott.

Unmasked: The dying man cops probed over the disappearance of William Tyrrell after he made a tearful confession he ‘picked up his best mate and the boy to drive them 300kms’ 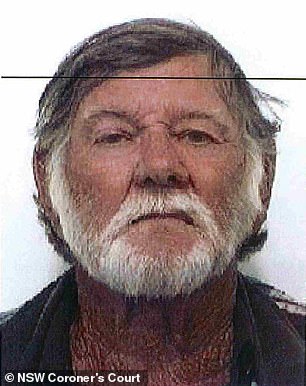 Secrets to the grave: Ray Porter allegedly suggested to an aged care nurse that he knew something about the little boy’s disappearance

The sensitive police documents show for the first time how detectives have worked to corroborate or disprove stunning claims that nursing home patient Ray Porter allegedly made about Tyrrell last year.

Months ago, a court hearing was rocked by testimony from an aged care nurse that Porter had rested his head on her shoulder during a medication run in April 2019 and hinted he knew something.

‘I didn’t do anything wrong,’ he told the nurse, Kirston Okpegbue.

‘All I did was give my best mate and the boy a lift.’ 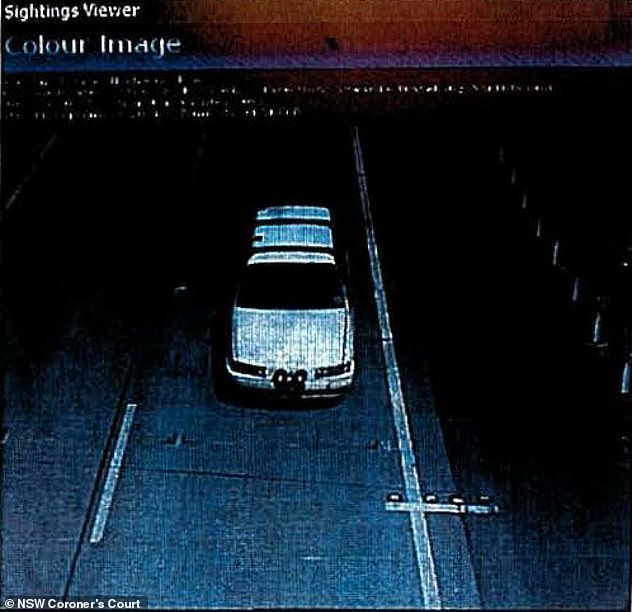 Police have worked to corroborate or disprove an extraordinary claim William Tyrrell may have been abducted by an elderly paedophile and driven away by his friend Ray Porter. Above, is a photograph of Porter’s white stationwagon from roadside cameras the day before William disappeared 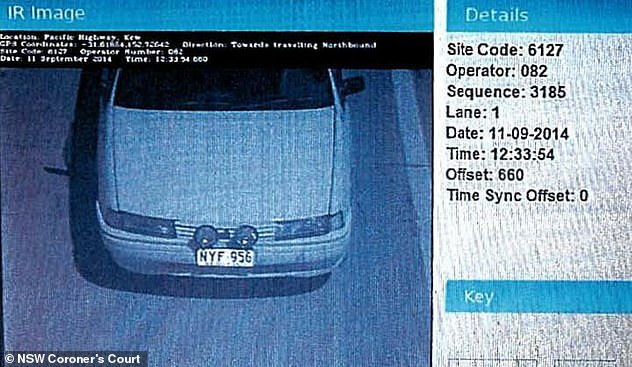 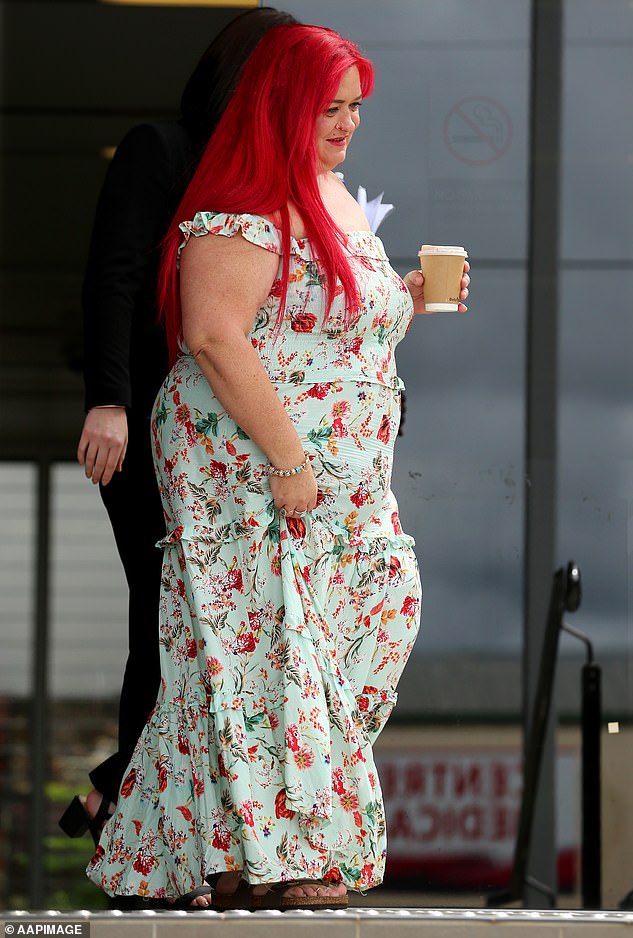 ‘The boy that went missing down in Kendall?’ Porter replied, before confirming he was speaking about Tyrrell, who has not been seen since September 12, 2014.

Porter allegedly claimed he picked up William and his mate from behind the Kendall School and then drove the pair north 300 kilometres.

Porter had only ever spoken of two of his friends, one of them being his ‘fishing buddy’ Frank Abbott, the court heard.

Abbott is a 79-year-old paedophile prisoner who has attracted increasing attention from Tyrrell investigators in the past year.

Abbott has denied any involvement in Tyrrell’s disappearance or death.

The question for police and the coroner is whether Porter’s statement is a tantalising clue about what happened to the toddler – or just a nonsense statement. 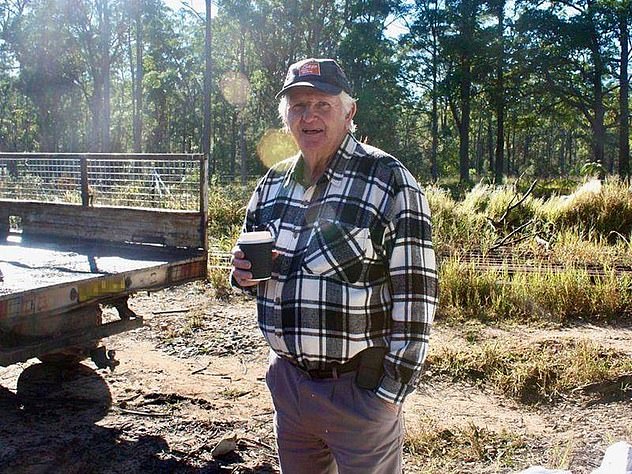 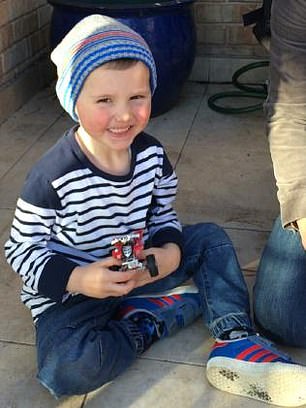 William Tyrrell vanished from his foster grandmother’s home on September 12, 2014. The three-year-old has never been seen since

The new coronial documents detail how investigators have had to cobble together records of Porter’s alleged travels on the mid north coast in September 2014, the month William vanished.

Data and photographs from Roads and Maritime Services cameras indicate that Porter’s white stationwagon traveled around the region over several days that month.

A recent document says in the two days after William vanished, Porter’s car was recorded passing the Kew southbound camera on the morning of September 13, 2014, and the north- and south-bound cameras at Port Macquarie, the next day.

An undated police note signed by Detective Senior Constable Ari Barr said: ‘Hospital records show that on the 12th September 2014, Porter was at dialysis at Port Macquarie Hospital between 9am and 3pm.

Porter’s car wasn’t picked up by highway cameras between his Wauchope home and the hospital that critical day.  But detectives suggested Porter had likely just used an alternative route, the Oxley Highway, to attend his clinic.

Porter is understood to have spoken to police last year, but can no longer explain himself to the inquest.

He has since died from a kidney infection.

The Gallagher Premiership will resume on Friday August 14 with Harlequins facing Sale Sharks as domestic rugby announces its return from the coronavirus pandemic. The...
Read more
- Advertisement -
Coronavirus

A Premier League footballer has been fined almost £30,000 for speeding 'like an idiot' while drink-driving to buy a friend some cigarettes.Sheffield United striker...
Read more

The Gallagher Premiership will resume on Friday August 14 with Harlequins facing Sale Sharks as domestic rugby announces its return from the coronavirus pandemic. The...
Read more
Coronavirus

A Premier League footballer has been fined almost £30,000 for speeding 'like an idiot' while drink-driving to buy a friend some cigarettes.Sheffield United striker...
Read more
News

The FBI has joined the ongoing search for a missing Amish teenager from Pennsylvania, offering a $10,000 reward for information on the whereabouts of...
Read more
- Advertisement -

Elon Musk appears to have retracted his support of Kanye West's run for president after his explosive and concerning Forbes interview. Last week, the Tesla...
Read more

An Asian American father who faced a stream of racist abuse as is family dined in a California restaurant said the Silicon Valley tech...
Read more

A glamorous social media influencer has sparked outrage by chartering a helicopter to visit a hermit who has lived outside civilisation in Siberia all...
Read more

Cornish estate including part of beach goes on sale for £8million

An estate including a campsite, houses, a cafe and ownership of part of one of Britain's best beaches has gone on sale with an...
Read more

Brazilian model Valentina Sampaio has made history by becoming the first transgender woman to grace the pages of the iconic Sports Illustrated Swimsuit Issue. The...
Read more