The chilling moment killer Raoul Moat threatened to murder members of the public is being broadcast for the first time in a new ITV documentary airing tonight.

Featured in Manhunt: The Raoul Moat Story, which airs at 9pm, Moat’s shocking outburst was found on a tape recorder by police in a woodland hideout near his home city of Newcastle.

Moat had evaded capture from officers after shooting his ex-girlfriend Sam Stobbart, then 22, and killing her new partner Chris Brown, 29, in early July 2010.

A day later, he permanently blinded police officer David Rathband with the same sawn-off shotgun used on his earlier victims. PC Rathband took his own life two years after the trauma.

Moat became the subject of the largest week-long manhunt the country had seen in 44 years before a six-hour stand-off with armed police ended with the former nightclub bouncer shooting himself. 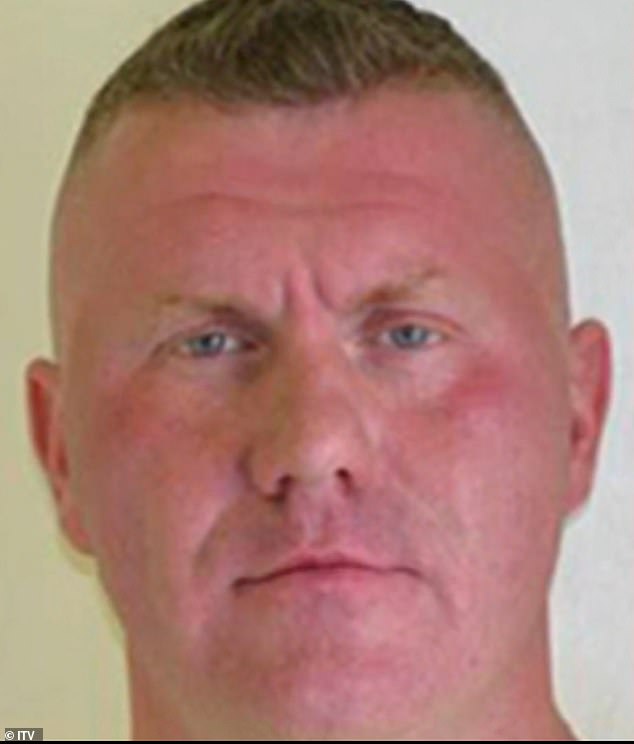 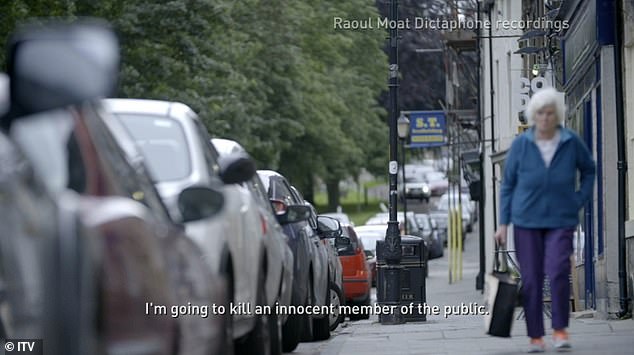 Featured in Manhunt: The Raoul Moat Story, Moat’s shocking outburst was found on a tape recorder by police in a woodland hideout near his home city of Newcastle. Pictured is a scene from the documentary during the airing of the killer’s threat

The killer’s recording contains a terrifying threat made after widespread media coverage of the case, with Moat saying: ‘For every lie I see in that paper, any paper, I will kill an innocent member of the public.’

His threat was thought to be so serious that press at the time agreed not to publish anything about his personal life, or anything that could have made the killer snap.

After Moat’s death, his menacing words were made public, but it’s understood that this is the first time he has been heard to speak the words outside of court and internal police events.

Ten years on from his crime spree, the new documentary aims to tell the inside story of how the man who became one of Britain’s most notorious killers managed to escape a massive search operation. 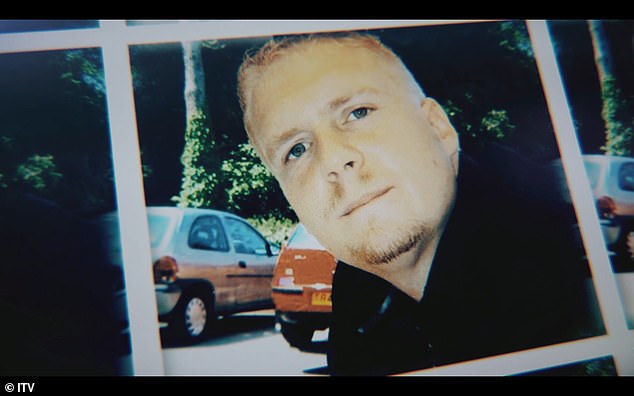 Moat had evaded capture from the police after shooting his ex-girlfriend Sam Stobbart, then 22, and killing her new partner Chris Brown (pictured), 29, in early July 2010 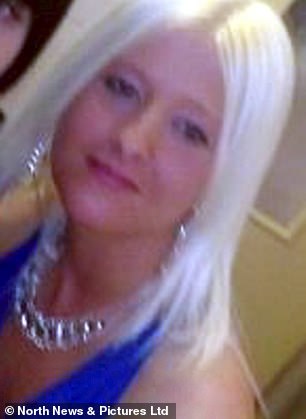 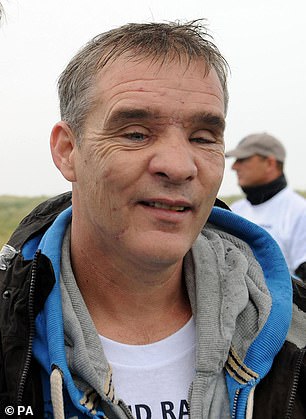 Two of Moat’s three victims: Ex-girlfriend Samantha Stobbart (left), then 22, who was hospitalised in the shooting and police officer David Rathband (right), who was permanently blinded in the attack

In the programme, Moat is also heard to threaten Northumbria Police officers, in a phone call, saying: ‘I’m going to keep coming for you. You’re going to have to kill me. I’m never going to stop.’

Prior to his two-day rampage, Moat, then 37, was released from Durham Prison in following an 18-week sentence for assault.

Two days later he targeted his former girlfriend and her new partner, who he believed was a police officer, and gathered up materials he planned to use during his murderous spree, including a sawn-off shotgun.

Having laid in wait outside Samantha’s house, he heard her and Chris Brown, actually a karate instructor, talking about him. 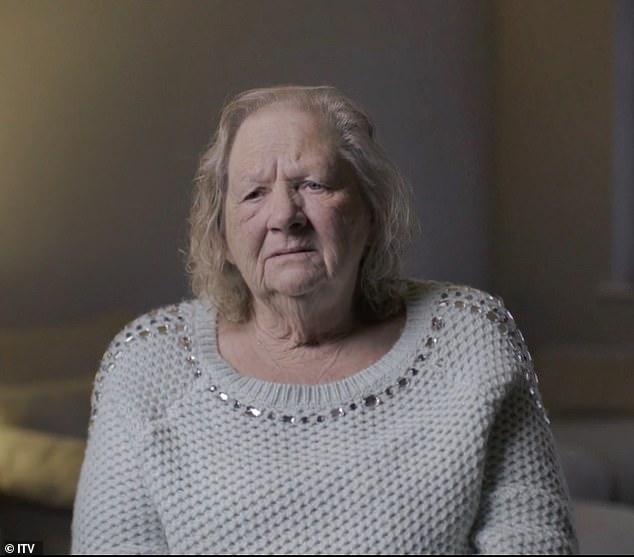 During the programme, Chris Brown’s mother Sally (above) recalls the devastating moment police arrived to tell her that her son was dead 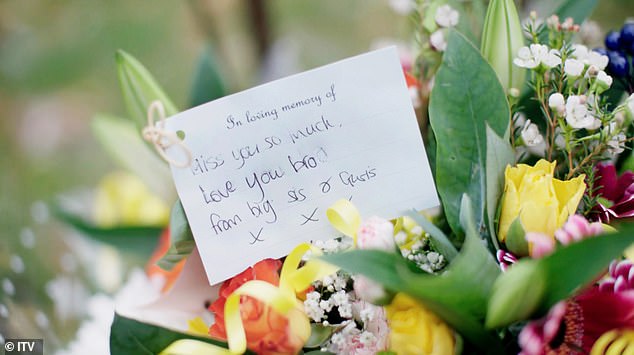 Flowers on the grave of Chris Brown from his sister. Prior to his two-day rampage, Moat, then 37, was released from Durham Prison in following an 18-week sentence for assault

When they left, he shot Chris dead, before firing at and injuring Samantha through the window of the house they were in, as she fled in terror.

During the programme, Chris’ mother Sally recalls the devastating moment police arrived to tell her that her son was dead.

She says: ‘As they’ve got out the car, we said, “Oh, God, you know, someone’s in trouble”. Then they’ve come over to us and asked for me. Well, that was it. That’s when the ground opened, basically.’

Moat went on the run after the shootings, surfacing when he shot Pc David Rathband in his car nearly 24 hours later, before disappearing again.

Evidence police found at a campsite on the outskirts of Rothbury, where Moat had been staying, included a dictaphone containing threats to police officers as well as to the pubic.

Thursday, July 1: Moat is released from Durham prison after serving 18 weeks for assault

Sunday, July 4: Pc David Rathband is shot in his patrol car and critically injured. Moat rings officers claiming Miss Stobbart was having an affair with a police officer

Tuesday, July 6: Moat’s car is discovered in Rothbury, Northumberland and police flood the area setting up a two-mile exclusion zone. A letter written by Moat reveals his intentions to declare war on the police

Wednesday, July 7: Officers find a tent where Moat had been sleeping and another letter from him

Thursday, July 8: Police say Moat had made threats to the general public and two men were arrested on suspicion of assisting an offender and bailed

Friday, July 9: At 7pm Moat comes out from his hiding place and reporters watch as he lies on the ground with a gun threatening to kill himself. Police try to negotiate with him for six hours

Saturday, July 10: A gunshot is heard at 1.10am and Moat is declared dead after being rushed to hospital. Police said Moat appeared to have killed himself 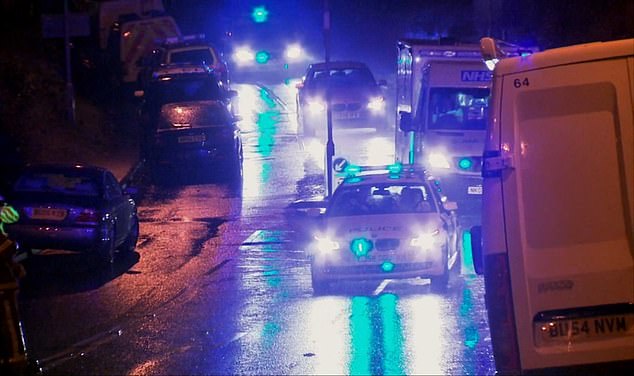 He evaded officers’ clutches until he suddenly appeared from the woods, lying in the long grass, with a gun pointed at his head, leading to a six-hour siege.

During the situation, Newcastle football legend Paul Gascoigne arrived at the police cordon to see if he could offer his help, but was sent away.

As the hours wore on, officers became aware the evening was likely to result in a grisly climax.

Assistant chief constable David Hartley, from South Yorkshire Police, who was brought in to assist, says officers tried to use long-range stun guns to prevent him shooting himself.

‘He moved the gun from under his chin to his temple and began talking in final words,’ the officer recalls.

‘And that was the tipping point to say, right, we need to try and save his life now. He put the gun to his head, he was about to shoot. There is no time.’

If you have been affected by this story, you can call the Samaritans on 116 123 or visit www.samaritans.org.