An emotional Van Jones has said Democrats are 'hurt' today after the election failed to produce a landslide in favor of Joe Biden. Polls had stro

An emotional Van Jones has said Democrats are ‘hurt’ today after the election failed to produce a landslide in favor of Joe Biden.

Polls had strongly suggested a Biden win but, as happened in 2016, Trump performed better than expected – with no candidate landing a killer blow.

Speaking early on Wednesday, Jones said that while a ‘political’ victory is still possible for the Democrats, a ‘moral’ victory over Trump-ism has evaporated.

‘We wanted to see a repudiation of [Donald Trump],’ he told viewers on CNN. ‘And the fact that it’s this close I think is… it hurts. It just hurts.’

A lot of Democrats are hurting tonight. Moral victory and political victory are not the same.

Political victory is possible. But we wanted to see a repudiation of this direction for the country, and that has not yet come. That hurts. 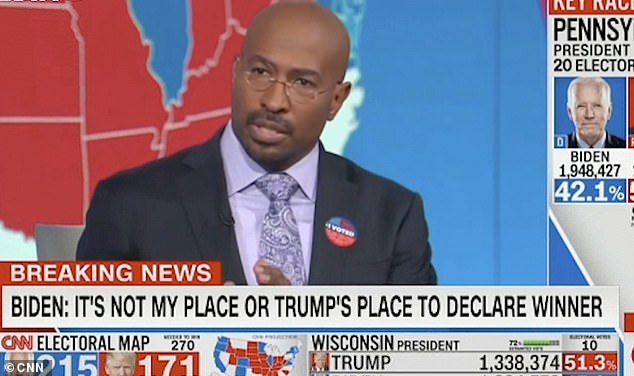 He added: ‘The political victory still may come.

‘But I think for people who saw babies being snatched away from their mothers at the border, people sending their kids into schools where the n-word is now being used against them, for people seeing this wave of intolerance, they wanted a moral victory tonight.’

It is similar to a speech Jones gave in 2016 on CNN, when he proclaimed Trump’s win a ‘whitelash’ against Obama’s presidency.

‘You have people putting children to bed tonight and they are afraid of breakfast. They’re afraid of “How do I explain this to my children?”‘

Early polls had suggested it could be a good night for Biden, as he was narrowly ahead in the battleground states of Ohio, Florida and North Carolina.

But as the night drew on, Trump staged a comeback, ultimately taking Ohio and Florida – and sinking Biden’s chances of an early, easy victory.

Biden kept himself in the race by flipping the state of Arizona blue and holding on to the key battleground of Minnesota.

But neither man scored a decisive victory, and it now looks like the race will come down to the so-called Rust Belt states of Wisconsin, Michigan, and Pennsylvania.

Georgia and North Carolina are also too close to call, though Trump holds a narrow lead in both with more than 90 per cent of the ballot counted.

Election officials have already warned that it could take days for some states – Wisconsin and Pennsylvania among them – to declare their final result.

This is because of a surge in the number of people, particularly Democrats, voting by mail-in ballot – which take longer to count.

It also opens up the possibility of a protracted and bitter legal fight that could go all the way to the Supreme Court – as happened in Florida with Bush vs Gore in 2000.

In that case, it took more than a month for the winner of the state – and by extension the presidency – to be declared. It ultimately went to Bush, by less than 600 votes.

Donald Trump all-but declared victory in a speech from the White House on Wednesday morning, saying ‘as far as I’m concerned, we won this election’.

He claimed to have won in both North Carolina and Georgia, where results have not been finalised, and suggested Arizona – which AP has declared for Biden – could still come back his way.

Trump also spoke of a ‘fraud on the American people’ while suggesting the fight could end up in court, pointing the finger of blame squarely at the Democrats.

It came after Biden gave his own speech to the faithful in Delaware, saying he is ‘on track to win this election’ but urging followers to ‘be patient’ and wait for the final counts to come in.

On Twitter, he added: ‘It’s not my place or Donald Trump’s place to declare the winner of this election. It’s the voters’ place.’