Sumner Redstone, the businessman and media magnate who formerly served as executive chairman of CBS and Viacom, has died. He was 97.Redstone, who often...
Read more
News

Meghan Markle pulled out of attending Pippa Middleton and James Matthew's wedding because she didn't want to 'create a media circus' and chose a...
Read more
Home Politics Dominic Raab denies Downing Street is in grip of 'Kremlin mole' as...
Politics
November 5, 2019

Dominic Raab denied 10 Downing Street is in the grip of a ‘Kremlin mole’, as MPs demanded a report into alleged Russian interference in the UK democratic process be published before next month’s general election.

The Foreign Secretary was pressed on why the Government is seeking to ‘delay’ publication of the Intelligence and Security Committee (ISC) report ahead of the General Election, with Downing Street indicating it would not be cleared for release before Parliament is dissolved on Wednesday.

Questions were also raised by Labour about the level of access Boris Johnson‘s senior adviser Dominic Cummings has to intelligence information, which prompted Mr Raab to hit back.

A whistleblower is said to have come forward this week with concerns over Cummings’ involvement with shadowy figures involved in ‘politics, intelligence and security’ in Russia during the 1990s.

The exchanges came before an urgent question in the Commons in which the Government failed to confirm the Prime Minister has read the ISC report and also suggested Brexit is behind the delay. 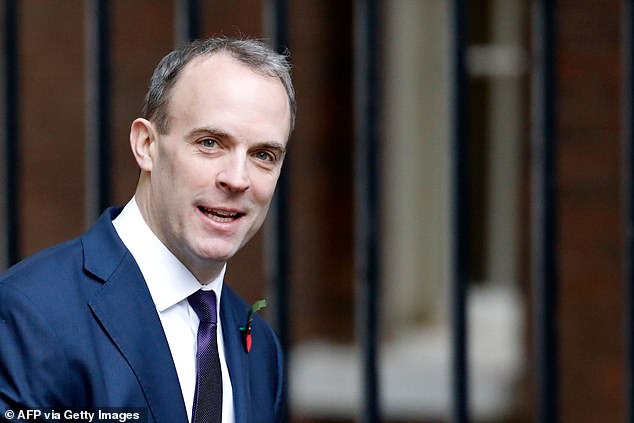 Foreign Secretary Dominic Raab arriving at Downing Street today. He has denied the Government is seeking to ‘delay’ publication of a report into potential Russian influence in the British democratic process

Former head of MI5, Lord Evans of Weardale, who held the position until 2013, also backed the release of the report, arguing ministers should explain why they do not want it to be made public.

ISC chairman Dominic Grieve, an Independent MP, has said the report was sent to the PM for ‘final confirmation’ on October 17, with a reply expected within 10 days.

Parliament is required to be sitting to enable the report to be published.

Speaking in the Commons, shadow foreign secretary Emily Thornberry asked: ‘What on earth do they have to hide?’

Previously Ms Thornberry raised in a letter Mr Raab whether Mr Cummings had been ‘deeply vetted’, a process which would grant him access to the government’s most sensitive intelligence.

Mr Raab said today that ISC reports ‘go through a number of different stages of clearance’, adding it ‘usually takes several weeks to complete’ with the average recently being six weeks.

He said: ‘This report was only submitted on October 17 so it has been handled in the correct way.’ 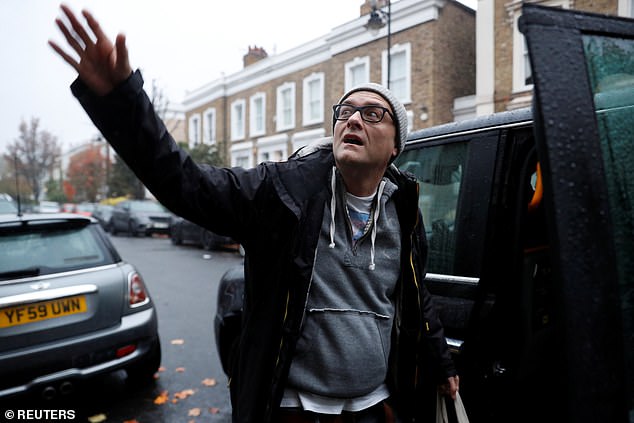 Mr Raab replied: ‘As she knows, the Government and ministers do not comment on security clearance.

‘But I think that the insinuation in her letter that Number 10 is somehow in the grip of a Kremlin mole is frankly ridiculous even by the standards of the ‘loony left’.

‘What is troubling is when the leader of the Labour Party sided with the Kremlin when it denied responsibility for the nerve agent attack in Salisbury in 2018.

‘One more reason why this Labour Party under this leader can never be trusted with Britain’s security.’

Mr Grieve, asking his urgent question, said it was ‘unprecedented’ that the committee should have received no response from the PM. 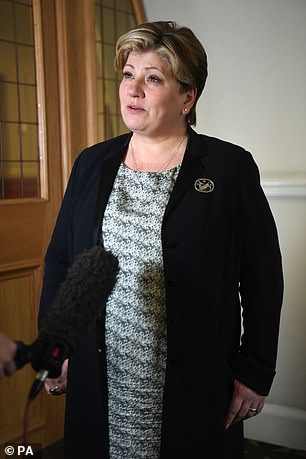 But Foreign Office minister Christopher Pincher said it is ‘not unusual’ for the review of ISC reports to ‘take some time’, adding: ‘It’s not as if the Prime Minister has not had one or two other things to do during the last several weeks, notably obtaining a good deal for Britain in withdrawing from the European Union.’

During the urgent question, Ms Thornberry also asked if the Government was making an ‘attempt to suppress the truth’, adding: ‘I fear it is because they realise that this report will lead to other questions about the links between Russia and Brexit and with the current leadership of the Tory party, which risks derailing their election campaign.’

Mr Pincher called on Ms Thornberry to ‘withdraw the imputation about the good name of the Conservative Party and this Government’.

Tory former cabinet minister David Davis said: ‘By not releasing the report, all he does is create a vacuum for the paranoid fantasies we’ve heard from the opposition benches to fill.’

Labour’s David Hanson, a committee member, asked: ‘Since receiving the report has the Prime Minister read it? Has he submitted any redactions?’

Mr Pincher said the 50-page report requires ‘careful consideration’, adding: ‘It is being reviewed by all the relevant senior officials within government and at Number 10.

‘The committee will be informed of that process and when the Prime Minister has concluded that the report is publishable then he will publish it.’

Labour’s Barry Sheerman (Huddersfield) said he wanted to fight the election on important domestic issues, adding: ‘If we don’t stop this now, this will run and run – almost like a Watergate thing – throughout the campaign.’ 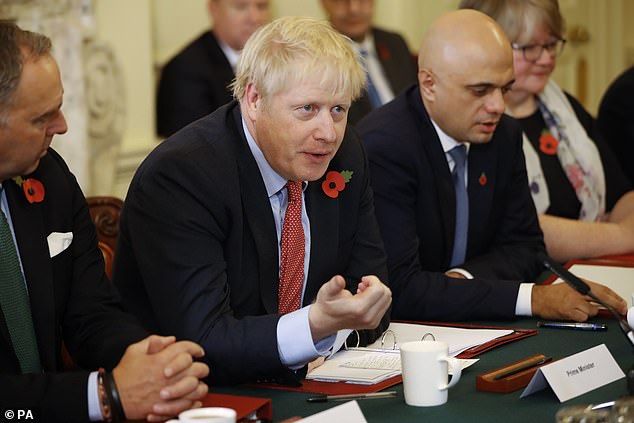 Boris Johnson holding a Cabinet meeting in Downing Street today. His closest adviser, Dominic Cummings, is facing questions over his involvement in Russian politics in the 1990s

Earlier, Lord Evans told BBC Radio 4’s Today programme: ‘If the Government have a reason why this should not be published before the election, then I think they should make it very clear what that reason is.’

On Monday the Prime Minister’s official spokesman indicated the necessary clearance process has yet to be completed.

The ISC oversees the work of the agencies – MI5, MI6 and GCHQ – and in the course of its work has access to highly sensitive intelligence material.

Its reports are submitted to the Government before publication to ensure no sensitive information is inadvertently made public. 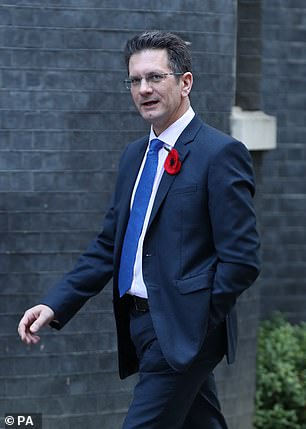 European Research Group leader and Conservative MP, Steve Baker, said the Government is ‘entitled not to be bullied’ into accelerating the release of security reports

Crossbench peer Lord Anderson of Ipswich, a former independent reviewer of terrorism legislation, warned the report may not be published until ‘mid-2020’ because of the General Election.

He told BBC Radio 4’s World At One the delay could be more than a few months because of the purdah rules and the time it takes to reconstitute the committee after an election.

Speaking in the House of Lords, Liberal Democrat former leader Lord Campbell of Pittenweem, who has served on the ISC, said: ‘Hiding behind the customary approach has led very substantially to a belief that there is something in this report which the Government does not want to be published in the course of a General Election.

‘If that charge is ultimately proved to be proved correct then the Government will necessarily suffer grave embarrassment for its approach to this matter.’

‘All that is being done is due process is being followed.’

Labour peer Lord West of Spithead, a former security minister and director of naval intelligence, said: ‘I think by holding it back what we are doing is creating an air of uncertainty and a feeling that there is something that should be hidden.’

Sumner Redstone, the businessman and media magnate who formerly served as executive chairman of CBS and Viacom, has died. He was 97.Redstone, who often...
Read more
- Advertisement -
News

Meghan Markle pulled out of attending Pippa Middleton and James Matthew's wedding because she didn't want to 'create a media circus' and chose a...
Read more

Sumner Redstone, the businessman and media magnate who formerly served as executive chairman of CBS and Viacom, has died. He was 97.Redstone, who often...
Read more
News

Meghan Markle pulled out of attending Pippa Middleton and James Matthew's wedding because she didn't want to 'create a media circus' and chose a...
Read more
Coronavirus

Pictured: Anti-masker who calls himself 'Xodijak' on social mediaA woman who was 'choked' by a...
Read more
- Advertisement -

Fanny flutters and a penguin: Meet the outrageous girls of The Bachelor

The Bachelor's Locklan 'Locky' Gilbert journey to find love got off to a dramatic start as he met his stunning line-up of ladies.On Wednesday night's...
Read more

The Bachelor star Locklan 'Locky' Gilbert's journey to find love got off to a dramatic start as he met his stunning line-up of ladies...
Read more

Mike Tindall has confessed that Prince Harry and Meghan Markle are 'happy doing what they're doing' and 'just want to be with family' - after...
Read more

Meghan Markle pulled out of attending Pippa Middleton and James Matthew's wedding because she didn't want to 'create a media circus' and chose a...
Read more

More than HALF of young people are praying online during pandemic

More than half of young people have been praying online during the pandemic, new figures have revealed.The poll showed that 'staggering' numbers of 18-24...
Read more

AI with ‘imagination’ are BETTER at diagnosing patients than doctors are

Babylon App, the online healthcare service, has created a new artificial intelligence algorithm which has 'imagination'. A study created an AI which was programmed with...
Read more